Yesterday I reported on the unconscionable deplatforming of University of Chicago professor Dorian Abbot, who was scheduled to give a prestigious invited lecture at MIT on October 21. The topic of his lecture was to be  “climate and the potential for life on other planets”. Abbot was to be the Carlson Lecturer in MIT’s Department of Earth, Atmospheric, and Planetary Sciences (DEAPS).

But Abbot’s lecture was canceled by DEAPS (they had to do it over the phone, not wanting to put it in writing) because Abbot had not only criticized Diversity, Equity, and Inclusion (DEI) initiatives here at the U of C (this caused an uproar), but co-wrote an op-ed in Newsweek making similar points—but also, unwisely, comparing DEI initiatives to Nazi policy on race.  This caused the expected social-media storm, largely fueled by people in DEAPS. The cowardly department then canceled Abbot’s talk.

Nevertheless, though I don’t agree fully with Abbot’s views, he has freedom of speech and academic freedom (this is, after all, the University of Chicago), and it’s an abrogation of those values to disinvite him from giving a lecture that has absolutely nothing to do with what people are complaining about. It’s a blot on MIT, for many academics, both liberal and conservative, have criticized MIT’s actions. What is MIT afraid of? Free thought?

Fortunately, the Academic Freedom Alliance (AFA), which I’ve described here, has come forward to defend Abbot. The AFA is one of those non-partisan groups, like the Foundation for Individual Rights in Education, that defends free speech on campus. Their mission statement includes this:

The Academic Freedom Alliance (AFA) is a non-profit organization whose members are dedicated to protecting the rights of faculty members at colleges and universities to speak, instruct, and publish without fear of sanction or punishment. We uphold the principles that are required if scholars are to fulfill their vocation as truth-seekers and colleges and universities are to be faithful to their mission as truth-seeking institutions.

Importantly, they have a number of big names on their board and a stable of powerful legal advisors that will enable the AFA to bring a lawsuit if necessary. (I’m not sure if it’s warranted in this case.)

At any rate, the AFA sent out an announcement to its members, which include me, describing a letter it wrote to MIT. Here’s part of the announcement:

PRINCETON, NJ – Today, the Academic Freedom Alliance sent a letter to the president of MIT and the head of the university’s Department of Earth, Atmospheric, and Planetary Sciences regarding the disinvitation of University of Chicago professor Dorian Abbot to deliver a prestigious annual lecture on climate science. After publicly announcing that Professor Abbot would be delivering this year’s John Carlson Lecture, the university rescinded the invitation and cancelled the event over controversy surrounding his positions on diversity initiatives at universities.

“I write on behalf of the Academic Freedom Alliance to express our firm view that this disinvitation represents an egregious violation of the principles of academic freedom and an abnegation of MIT’s own stated commitment to freedom of thought,” wrote Keith E. Whittington, chair of the AFA’s academic committee, in the letter to MIT President L. Rafael Reif and Professor Robert van der Hilst.  “The Academic Freedom Alliance stands firmly behind Professor Abbot in this matter and calls on MIT to adhere to its academic freedom principles and allow the Carlson Lecture to go forward without interruption.”

. . . Professor Abbot’s disinvitation has attracted attention across the scientific community. Anna Krylov, a Professor of Chemistry at the University of Southern California who has published an academic paper on the perils of politicizing science, said of MIT’s decision, “This is an alarming case of scholarship suppression and censorship in STEM. This cancellation was facilitated by Twitter vigilantes and enabled by the complacency of the leadership of our institutions. Suppression of scientific communications in response to the demands of activists offended by the political views of a scientist threatens academic freedom, undermines the core values of  science, and subverts the scientific enterprise. It also threatens our future. How are we to solve today’s societal challenges if we silence scientists because of politically non-conforming views?”

The AFA’s three-page letter can be read and downloaded by clicking on the first page below. The letter ends by asking MIT to reinstate Abbot as the Carlson lecture. Note the last paragraph on the first page, asserting that Abbot’s disinvitation violates MIT’s own principles of freedom of expression. The letter is signed by Keith Whittington, Chair of the AFA’s Academic Committee as well as a Professor of Politics at Princeton. It also refers to the University of Chicago’s Kalven Report about avoiding chilling of speech, a report I’ve often discussed. 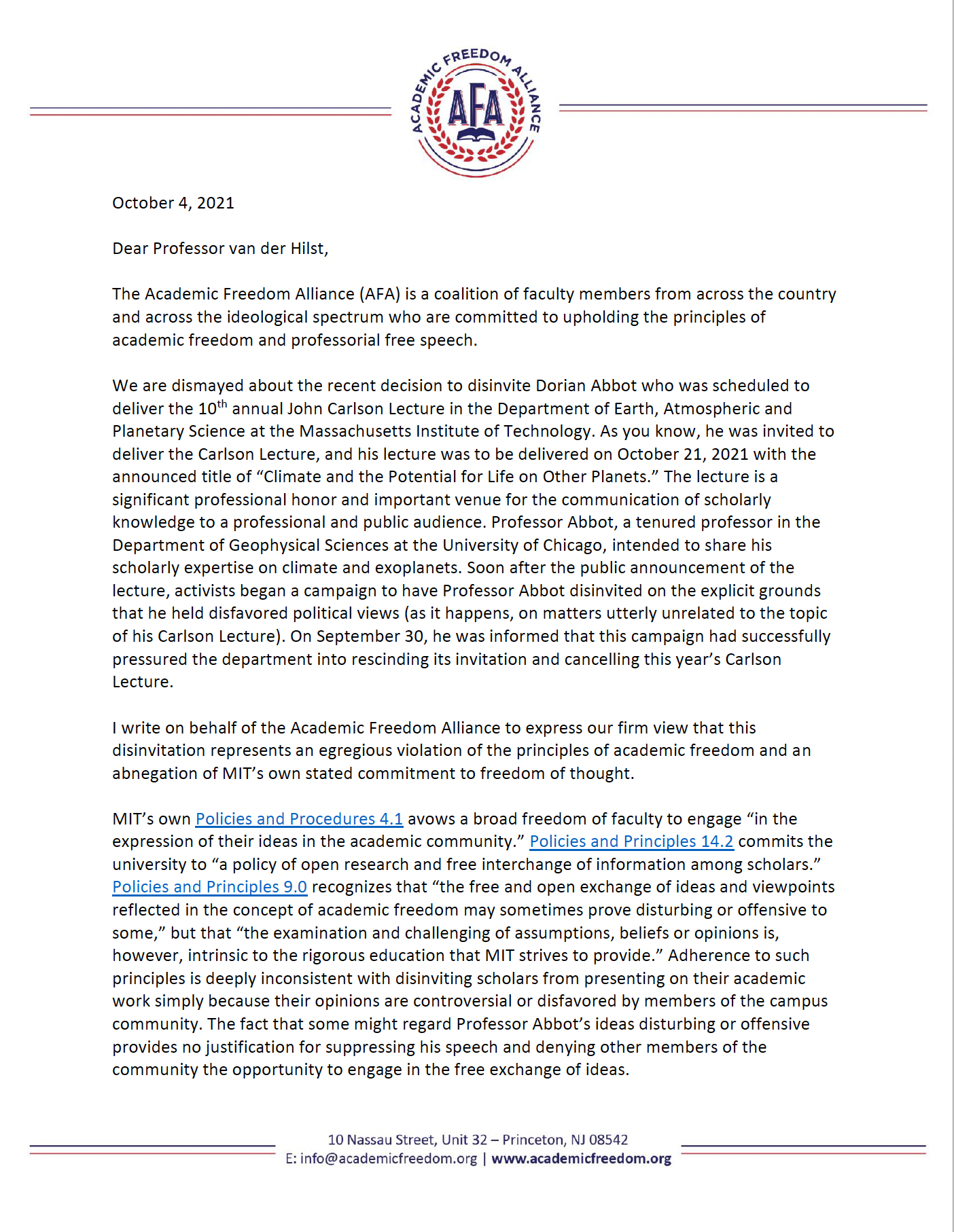 For a school with such a high reputation, and based so much on science, MIT is getting unaccountably woke. They’re at the point where they need to hear a three-page lecture on how a good school should comport itself with respect to freedom of speech a thought, a lecture that includes this paragraph:

When universities extend invitations to speakers, it is imperative that they stand behind those invitations and not rescind them under political pressure. Caving in to disinvitation campaigns emboldens those who would seek to suppress the expression of dissenting views and sends a message that universities will not stand up for their own principles and will not protect the campus as a place where ideas can be freely debated. If threatened protests can force universities to cancel events, then vocal agitators across the ideological spectrum will be incentivized to organize themselves to shut down any speech or speaker with which they disagree. This threat is particularly grave when it interferes with activities that are at the very center of a university’s academic enterprise. If the faculty cannot gather to listen to the presentation of scholarly arguments out of fear that some might object to giving a fellow scholar an audience, then the university can no longer fulfill its most basic functions. Universities have a particular responsibility to stand up to such threats.

Such disinvitations would never happen at the University of Chicago (faculty and students here tried but failed to prevent Steve Bannon from being invited to speak, but he never scheduled an appearance). MIT surely realizes that they’re simply encouraging the “heckler’s veto” by caving in to the pressure of Twitter and Facebook.

Let’s have a poll: