I’ve written about Dorian Abbot—an associate professor in our Geophysical Sciences Department—twice before. The first time was in November of last year when Abbot came under fire for posting YouTube videos that weren’t in line with the Zeitgeist. As I said at the time:

The (associate) professor is Dr. Dorian Abbot in our Department of Geophysical Sciences posted four YouTube videos, with slides, taking issue with some initiatives about diversity and inclusion. His talks emphasized the need for a meritocracy rather than “quotas” of minority applicants, and as well as asserting that it’s not the business of universities to promote social justice.

. . . Have a look especially at the letter to Abbot’s department from 162 people affiliated with the University of Chicago and Geophysical Sciences (their names are unfortunately blacked out, though I think signers should make their names public). The letter demands all kinds of accounting and punishments for what Abbot did.  These including giving Abbot’s graduate and undergraduate students a way to opt out of his mentorship and teaching, making a departmental statement that Abbot’s videos were “unsubstantiated, inappropriate, and harmful to department members and climate” (the exact “harm” that occurred isn’t specified).

This being the University of Chicago, and the matter being one of free speech and academic freedom, Abbot wasn’t punished, though many people still wanted to silence him.

On July 8 of this year, Abbot was confirmed as the prestigious Carlson Lecturer in the Department of Earth, Atmospheric, and Planetary Sciences (DEAPS) at MIT, scheduled for October 21.

My second post on Abbot appeared after he and Ivan Marinovic published an op-ed in Newsweek, “The Diversity Problem on Campus“, in the August 12 issue of Newsweek. It was also an attack on Diversity, Equity, and Inclusion (DEI) initiatives. Unfortunately, the pair ended their piece with a comparison of these initiatives to conditions in Nazi Germany:

Ninety years ago Germany had the best universities in the world. Then an ideological regime obsessed with race came to power and drove many of the best scholars out, gutting the faculties and leading to sustained decay that German universities never fully recovered from. We should view this as a warning of the consequences of viewing group membership as more important than merit, and correct our course before it is too late.

As I remarked about that:

Sadly, at the end, Abbot and Marinkovic sabotage their entire program by comparing American DEI initiatives and their “obsession with race” with another regime, also “obsessed with race”, whose obsession destroyed academia in that country. Yes, it was the Nazis. The authors play the Hitler card! That is a really bad move, and one that undercuts their thesis, since the comparison is not at all valid, if for no other reason that the “obsession with race” went in the opposite direction in Germany: they wanted less diversity. By getting rid of a previously oppressed group (Jewish professors), they lost a huge amount of talent. But DEI initiatives in the U.S. are not trying to get rid of oppressed groups; they’re trying to include them. Whether that will affect academic quality is debatable, but the histories are not at all comparable.

In my view, the Newsweek paragraph, which I see as really unwise and inimical to their point, scuppered their entire editorial.

Regardless, it led to Abbot being the target of two Twitter mobs a month apart, apparently involving many members of MIT’s DEAPS, with participants demanding that Abbot be disinvited as the Carlson lecturer. Here are a few tweets (click to enlarge) expressing outrage at Abbot’s invitation; these are from a post by Chris at Karlstack: 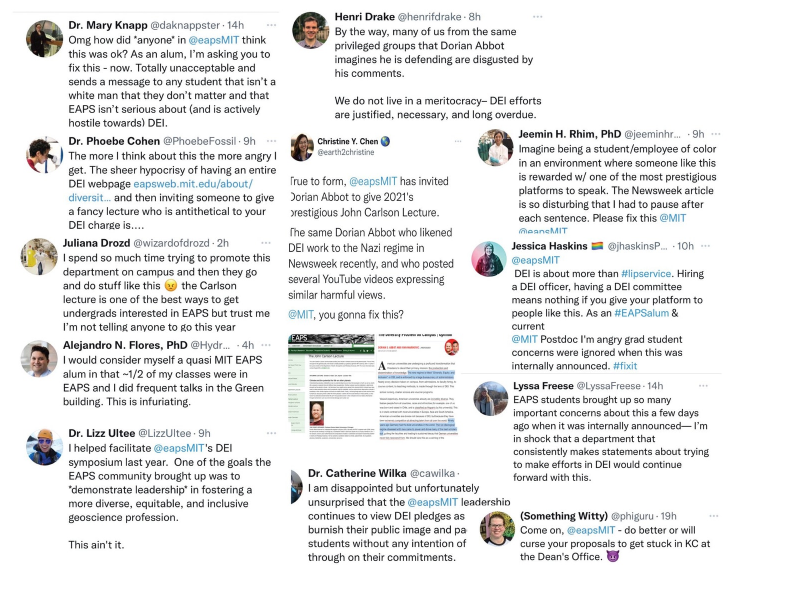 And that’s what happened. On September 28 the chair of DEAPS, bowing to the mob, asked to speak to Abbot on the phone (the chair clearly didn’t want to leave a paper trail). When they spoke two days later, Abbot was informed that his lecture would be canceled this year, and he got nothing further in writing.  Importantly, as Abbot notes in his account on Bari Weiss’s site (below), Abbot’s proposed lecture had nothing to do with DEI: the topic was  “climate and the potential for life on other planets.” But it didn’t matter; the man had rendered himself toxic and had to be canceled.

You can read other accounts of the fracas in Newsweek, Legal Insurrection, Leiter Reports, and an account by Abbot himself on Bari Weiss’s site (click on screenshot below):

My feelings about this cancellation should already be clear from what I’ve written on this site. Canceling the man for exercising his freedom of speech and his academic freedom, after already having invited him to talk on a topic not dealing with controversial DEI matters, is reprehensible. MIT should be deeply ashamed of itself. If the university had any spine, it would re-invite Abbot. But of course it won’t.

Abbot’s been very magnanimous—too much so, I think—about his critics, even tweeting this:

I forgive the activists who led the campaign against me. Please do not attack them personally. They are fish swimming in a sea of moral confusion. Some of the responsibility for their behavior rests on their elders, who have not helped them form properly.

But as you’ll see in his article, he pulls no punches about “cancel culture” demonstrated by his disinvitation.  Here’s the ending of his piece on Weiss’s site.

Do we want a culture of fear and repression in which a small number of ideologues exert their power and cultural dominance to silence anyone who disagrees with them? Or do we want our children to enjoy truth-seeking discourse consisting of good-natured exchanges that are ultimately grounded in a spirit of epistemic humility?

This is not a partisan issue. Anyone who is interested in the pursuit of truth and in promoting a healthy and functioning society has a stake in this debate. Speaking out now may seem risky. But the cost of remaining silent is far steeper.

Note: Weiss adds this at the end:

Thanks to Princeton Professor (and friend of Common Sense) Robby George, Dorian Abbot’s cancelled lecture will be hosted by the James Madison Program in American Ideals and Institutions on the day it was scheduled to be given at MIT: October 21 at 4:30 PM EST.

It will be free to the public via Zoom and you can register at this link.

We hope you’ll tune in.