Actually, the word “kerfuffle” may not be appropriate here, as this is a pretty serious conflict between, on the one hand, a professor who takes issue with his department’s policies about diversity and inclusion, and, on the other, students and alumni, who, outraged by the professor’s opinion, have taken steps, in a letter/petition, to get the professor severely punished for expressing his views on YouTube.

The whole issue is concisely summarized by my law-school colleague Brian Leiter on his website Leiter Reports (click on the screenshot):

The (associate) professor is Dr. Dorian Abbot in our Department of Geophysical Sciences, who posted four YouTube videos, with slides, taking issue with some initiatives about diversity and inclusion. His talks emphasized the need for a meritocracy rather than “quotas” of minority applicants, and as well as asserting that it’s not the business of universities to promote social justice. Unfortunately, although I watched the videos earlier, Abbot has taken them down, though his slides are still online (see the first sentence of Leiter’s excerpt below). Here’s one slide that was guaranteed to cause problems for him: 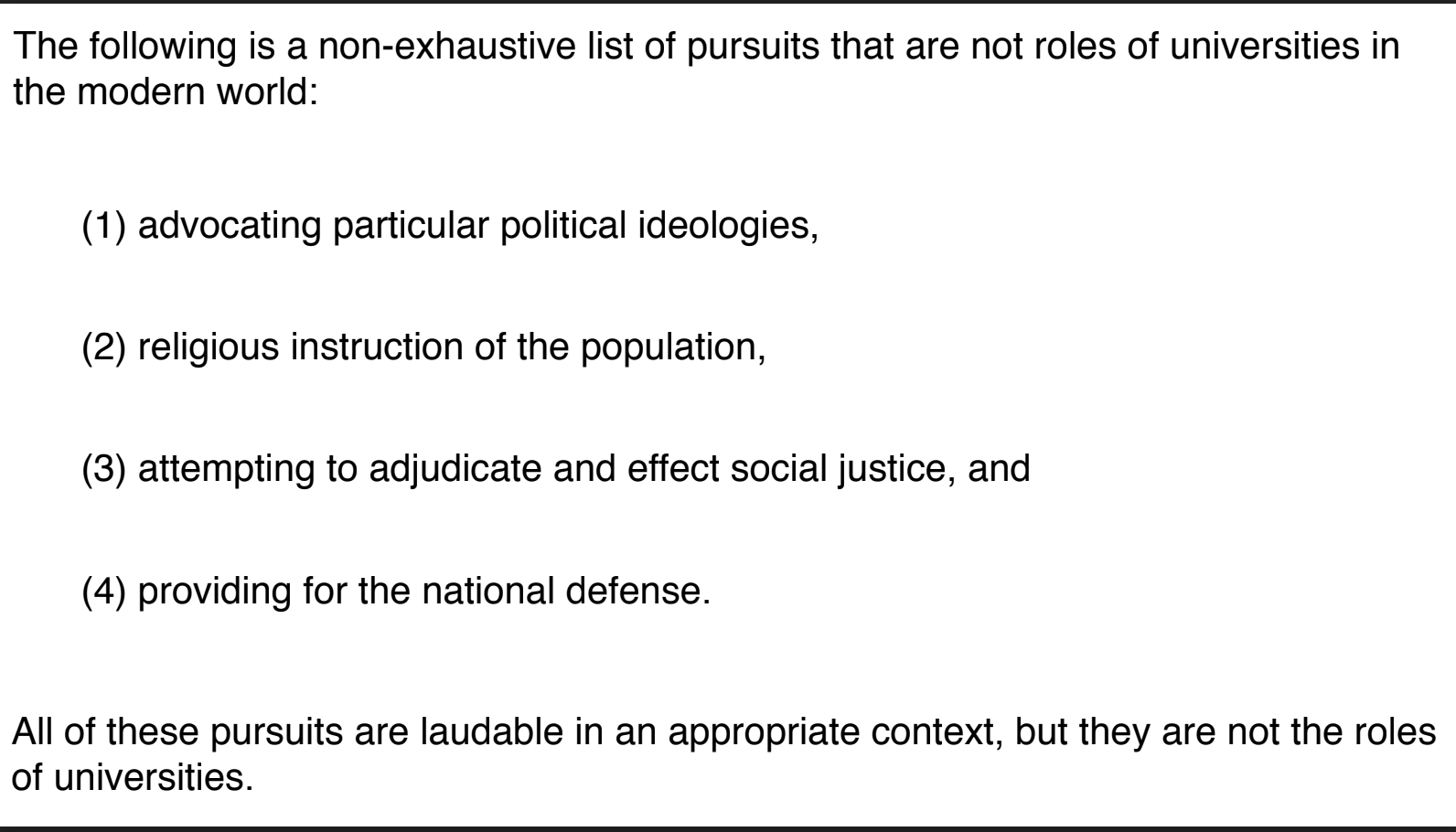 Here’s another of Abbot’s slides. (The “Holdomor” refers to the Soviet genocide by famine of the kulaks (rich peasants) in 1932-1933 in Ukraine. 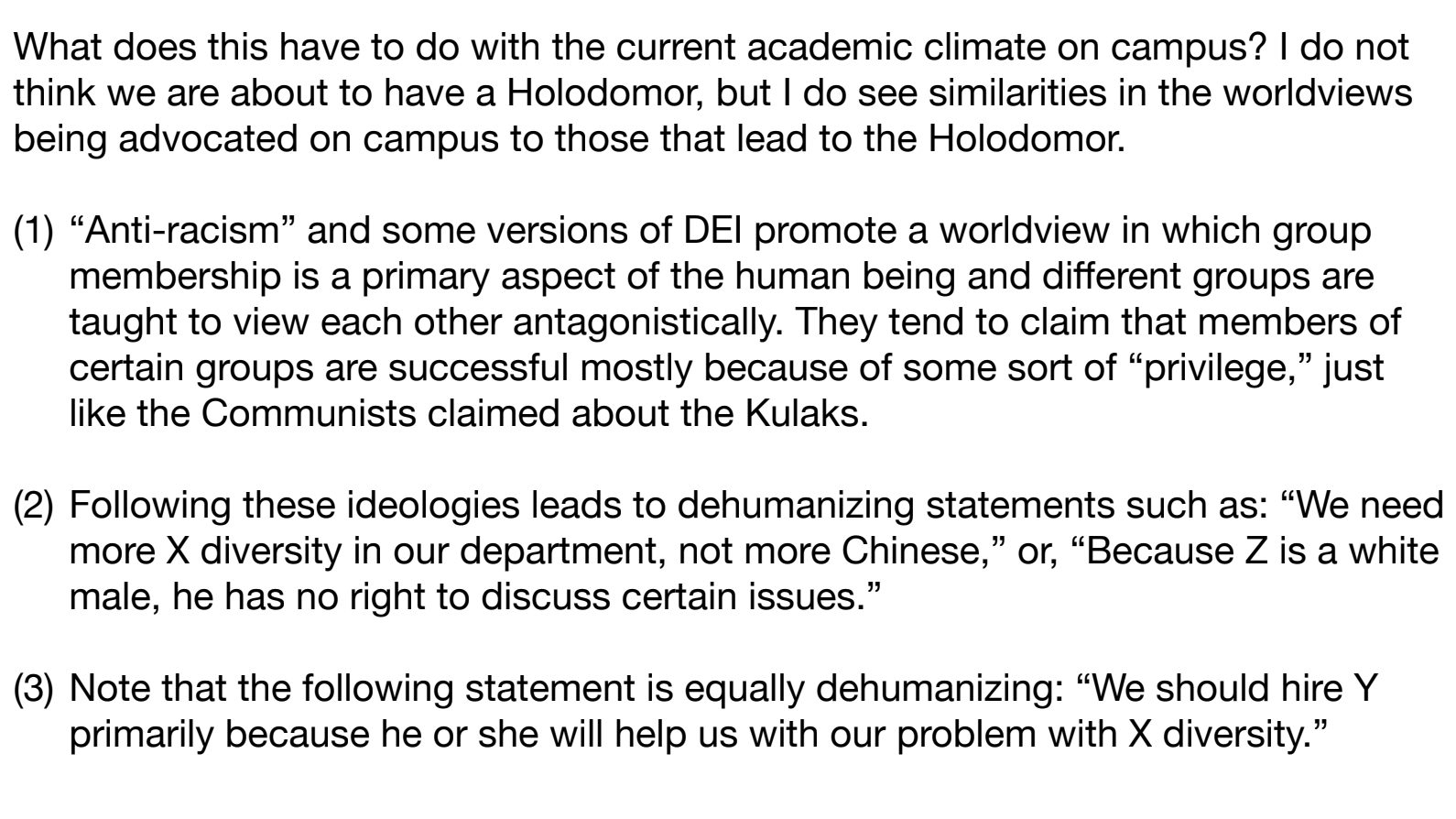 This stuff is guaranteed to anger those who see social-justice work, at present, as one of the most pressings things a university can do in its official capacity. Further, criticizing identity politics, when they’re the predominant kinds of politics on campus, is just not on. The backlash against Abbot was strong and severe (and probably predictable), and is summarized by Leiter below.

Have a look especially at the letter to Abbot’s department from 162 people affiliated with the University of Chicago and Geophysical Sciences (their names are unfortunately blacked out, though I think signers should make their names public). The letter demands all kinds of accounting and punishments for what Abbot did.  These including giving Abbot’s graduate and undergraduate students a way to opt out of his mentorship and teaching, making a departmental statement that Abbot’s videos were “unsubstantiated, inappropriate, and harmful to department members and climate” (the exact “harm” that occurred isn’t specified), and measures like this:

[The department should] Implement accountability measures to address patterns of bigoted behaviour in both the department’s hiring/promotion/tenure process and teaching opportunities. For example, faculty who persistently engage in bigoted behaviour should be prevented from taking on teaching roles, new graduate students/post-docs/staff, and committee responsibilities.

Below is part of Leiter’s post about the issue, and I have to say that I agree with much of it. I don’t agree with everything Abbot said on his videos or in his slides (as I’ve repeatedly said, I favor some form of affirmative action in hiring professors or accepting graduate students), but neither do I agree that Abbot, for exercising his free speech as a professor, and raising issues that do deserve some discussion, should be demonized and punished in this way.

My preferred response, were I a student or faculty member who took issue with Abbot’s claims, would be counterspeech: rebutting them. The anger evinced in the letter to his department seems to me a huge overreaction, but in line with many responses to “anti-woke” stuff on college campuses. But of course the letter-writers have every right to say what they want about Abbot and demand that he be punished. I don’t think he should suffer demonization in this way, as it represents a chilling of speech: if you oppose the au courant ideology, you will be attacked big time, and who wants to undergo that?

I recommend you look at the links. From Leiter, and  note that there’s a petition supporting Abbot’s freedom of speech that you can sign:

You can see the slides that formed the basis for his presentations to his colleagues here,  here, here, and here; his own account of events is here.  I agree with some of what he has to say, and disagree with other parts.  But his views are not “hateful,” “harmful” or out of place in a university that values free discussion on important issues.

For dissenting from “diversity” orthodoxy, Professor Abbot has now been subjected to a disgraceful public denunciation by postdocs and graduate students in Geology (and other UChicago science departments (complete with fictitious claims about “aggression” and “safety”).  The public version of the letter omits the names of the benighted grad students and postdocs.  But some faculty and postdocs have gone public with their delusional responses:  for example, Assistant Professor Graham Slater’s Twitter thread is here  (do review the actual slides to see how unhinged this take is), and the reaction of a geology postdoc at Chicago, Michael Henson (also here).

There is now a petition in support of Professor Abbott here which I encourage readers to sign.

There’s very little extramural speech that ought to have any bearing on hiring or promotion decisions in universities, but open contempt like that above for academic freedom and lawful expression–which are foundational to the academic enterprise–probably should count against someone.  (We’ve touched on this issue before.)  If people like Slater and Hanson carry on like this now, what kind of damage will they do to their departments and disciplines once they have tenure?

I don’t like anyone being punished or demonized for exercising freedom of speech, but the people who will suffer from this are not those who came out against Abbot, but Abbot himself. Perhaps he didn’t realize what a beehive he was entering with his YouTube videos, for much of the country is simply unaware of social-justice conflicts. But freedom of speech is paramount, and if people don’t like what Abbot said, they can avoid him, leave his mentorship (but not his classes, I think!), or criticize him. And that’s as far as it should go. We needn’t call for his head on a platter.