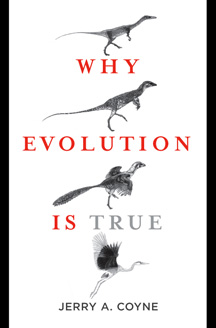 Among the wonders that science has uncovered about the universe, no subject has sparked more fascination and fury than evolution. Yet in all the ongoing debates about creationism and its descendant, “intelligent design,” one element of the controversy is rarely mentioned: the evidence, the empirical truth of evolution by natural selection. And that evidence is vast, varied, and magnificent, drawn from a huge spectrum of scientific inquiry ranging from genetics, anatomy, and molecular biology to paleontology and geology.

Why Evolution Is True is a succinct and accessible summary of the facts supporting Darwinian evolution. Scientists today are finding species splitting in two, observing natural selection changing animals and plants before our eyes, and discovering more and more fossils capturing change in the past-dinosaurs that have sprouted feathers, fish that have grown limbs. Jerry Coyne eloquently shows that evolution does not destroy the beauty of life but enhances it.

Reading this book will explain why so many scientists have dedicated their careers to resolving this debate, and why education administrators fervently fight legislation demanding that science curricula include equal time for anti-Darwinian theories. By demonstrating the “indelible stamp” of the processes first proposed by Darwin, Jerry Coyne clearly confirms that evolution is more than just a theory: it is a fact-a fact that cannot be doubted by anyone with an open mind.

Excerpt from jacket cover. © Jerry A. Coyne, 2009. All rights reserved.

With great care, attention to the scientific evidence and a wonderfully accessible style, Coyne, an evolutionary geneticist at the University of Chicago, presents an overwhelming case for evolution. Ranging from biogeography to geology, from anatomy to genetics, and from molecular biology to physiology, he demonstrates that evolutionary theory makes predictions that are consistently borne out by the data – basic requirements for a scientific theory to be valid. Additionally, although fully respectful of those who promote intelligent design and creationism, he uses the data at his disposal to demolish any thought that creationism is supported by the evidence while also explaining why those ideas fall outside the bounds of science. Coyne directly addresses the concept often advanced by religious fundamentalists that an acceptance of evolution must lead to immorality, concluding that “evolution tells us where we came from, not where we can go.” Readers looking to understand the case for evolution and searching for a response to many of the most common creationist claims should find everything they need in this powerful book, which is clearer and more comprehensive than the many others on the subject.

Evolution is the foundation of modern biology, and in Why Evolution Is True, Jerry Coyne masterfully explains why. From the vast trove of evidence of evolution scientists have gathered, Coyne has carefully selected some of the most striking examples and explained them with equal parts grace and authority.
— Carl Zimmer, author of Microcosm: E. coli and the New Science of Life

Its ignorant opponents like to say that the process of evolution by natural selection is “only a theory.” (That’s how they prove their ignorance.) Jerry Coyne shows with elegance and rigor that it is a hypothesis that meets and withstands all tests, and strengthens itself as a theory thereby. One could almost say that it had the distinct merit of being true.
— Christopher Hitchens, author of God is Not Great

Why Evolution is True is the book I was hoping would be written someday: an engaging and accessible account of one of the most important ideas ever conceived by mankind. The book is a stunning achievement, written by one of the world’s leading evolutionary biologists. Coyne has produced a classic — whether you are an expert or novice in science, a friend or foe of evolutionary biology, reading Why Evolution is True is bound to be an enlightening experience.
— Neil Shubin, author of Your Inner Fish and The Universe Within

Jerry Coyne has long been one of the world’s most skillful defenders of evolutionary science in the face of religious obscurantism. In Why Evolution is True, he has produced an indispensable book: the single, accessible volume that makes the case for evolution. But Coyne has delivered much more than the latest volley in our “culture war”; he has given us an utterly fascinating, lucid, and beautifully written account of our place in the natural world. If you want to better understand your kinship with the rest of life, this book is the place to start.
— Sam Harris, founder of the Reason Project and author of the New York Times best sellers The End of Faith and Letter to a Christian Nation

Scientists don’t use the word ‘true’ lightly, but in this lively and engrossing book, Jerry Coyne shows why biologists are happy to use it when it comes to evolution. Evolution is ‘true’ not because the experts say it is, nor because some world view demands it, but because the evidence overwhelmingly supports it. There are many superb books on evolution, but this one is superb in a new way — it explains out the latest evidence for evolution lucidly, thoroughly, and with devastating effectiveness.
— Steven Pinker, Harvard University, and author of The Stuff of Thought: Language as a Window into Human Nature

For anyone who wishes a clear, well-written explanation of evolution by one of the foremost scientists working on the subject, Why Evolution is True should be your choice.

I once wrote that anybody who didn’t believe in evolution must be stupid, insane or ignorant, and I was then careful to add that ignorance is no crime. I should now update my statement. Anybody who doesn’t believe in evolution is stupid, insane, or hasn’t read Jerry Coyne. I defy any reasonable person to read this marvellous book and still take seriously the “breathtaking inanity” that is intelligent design “theory” or its country cousin, young earth creationism.
— Richard Dawkins, author of The God Delusion