Because of rough seas yesterday, we couldn’t launch the Zodiac boats (small rubber outboard-motor boats holding about a dozen passengers) to visit Cape Horn, regarded as the southernmost point of land in South America. I thus refer to you the visit I made there two years ago: this post will show you all there is to see. I’m glad I was able to land on my last visit, so it wasn’t pressing that I visit again.

Cape Horn is the southernmost headland of the Tierra del Fuego archipelago of southern Chile, and is located on the small Hornos Island. It marks both the northern boundary of the Drake Passage and where the Atlantic and Pacific Oceans meet.

Cape Horn was identified by mariners and first rounded in 1616 by the Dutchman Willem Schouten and Belgian Jacob Le Maire, who named it

Kaap Hoorn(help·info) after the city of Hoorn in the Netherlands. For decades, Cape Horn was a major milestone on the clipper route, by which sailing ships carried trade around the world. The waters around Cape Horn are particularly hazardous, owing to strong winds, large waves, strong currents and icebergs. 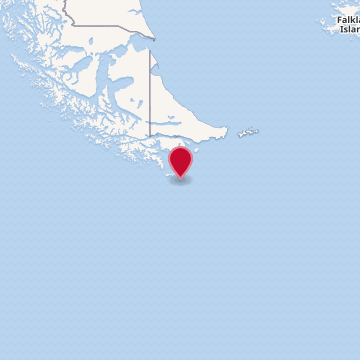 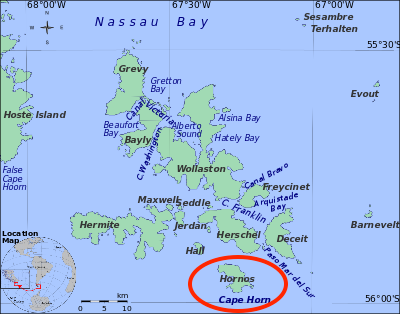 The southern tip of Hornos is marked by a large mountain that runs down to the sea. At a promontory overlooking the sea the Chilean naval base, consisting of a lighthouse, a house for the lighthouse keeper and his family, a chapel, and a radio tower.

Here’s a picture and caption from Wikipedia; I’ve indicated the lighthouse with an arrow: 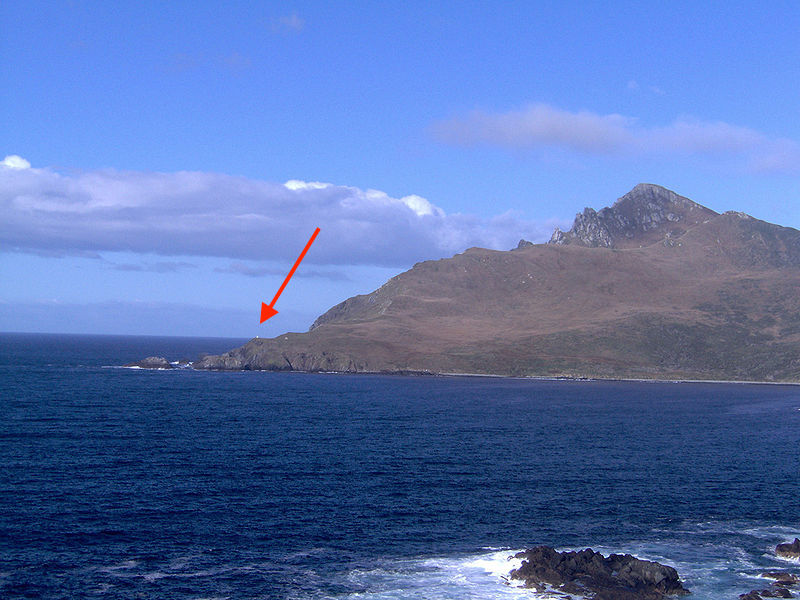 My photo of the southern tip with lighthouse, taken from the deck yesterday morning. The weather was dire with wretchedly rough seas.  This was the second time we failed to land at Cape Horn, and, given the rough seas,  I think a 40% success rate is par for the course. Fortunately, on my second trip in 2019 we did land, visited the lighthouse, talked to the isolated lighthouse keeper, and saw the famous albatross sculpture, which is remarkable. See my earlier post for photos of all this. 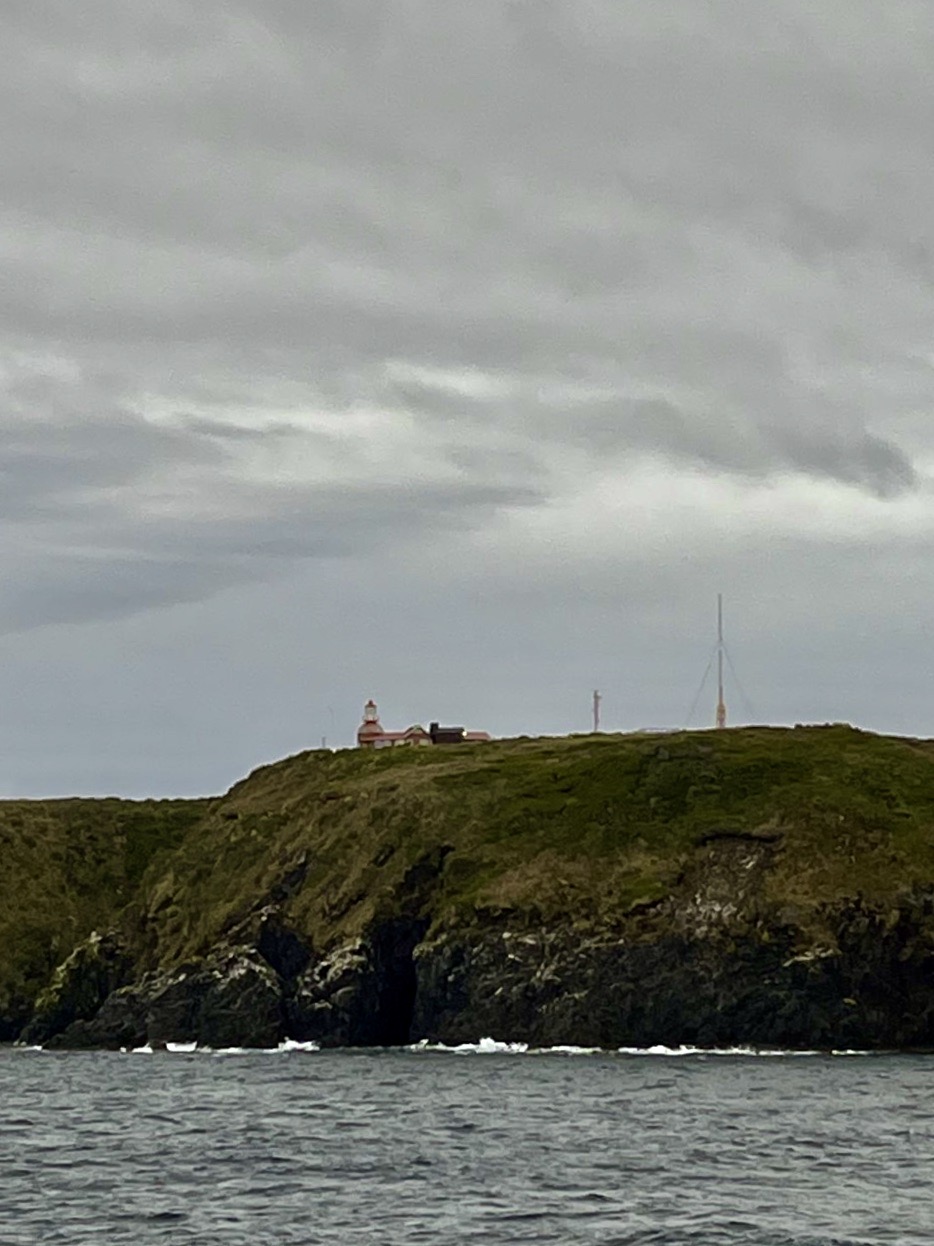 Below: the complex terrain of Tierra del Fuego, with many islands and channels. It’s no wonder that the Beagle was sent out in 1826 (and then again in 1831, this time with Darwin aboard) to map it all out.

Spot the bird! (Enlarge photo.) If you can identify the species, and support your ID, I’ll give you $10. 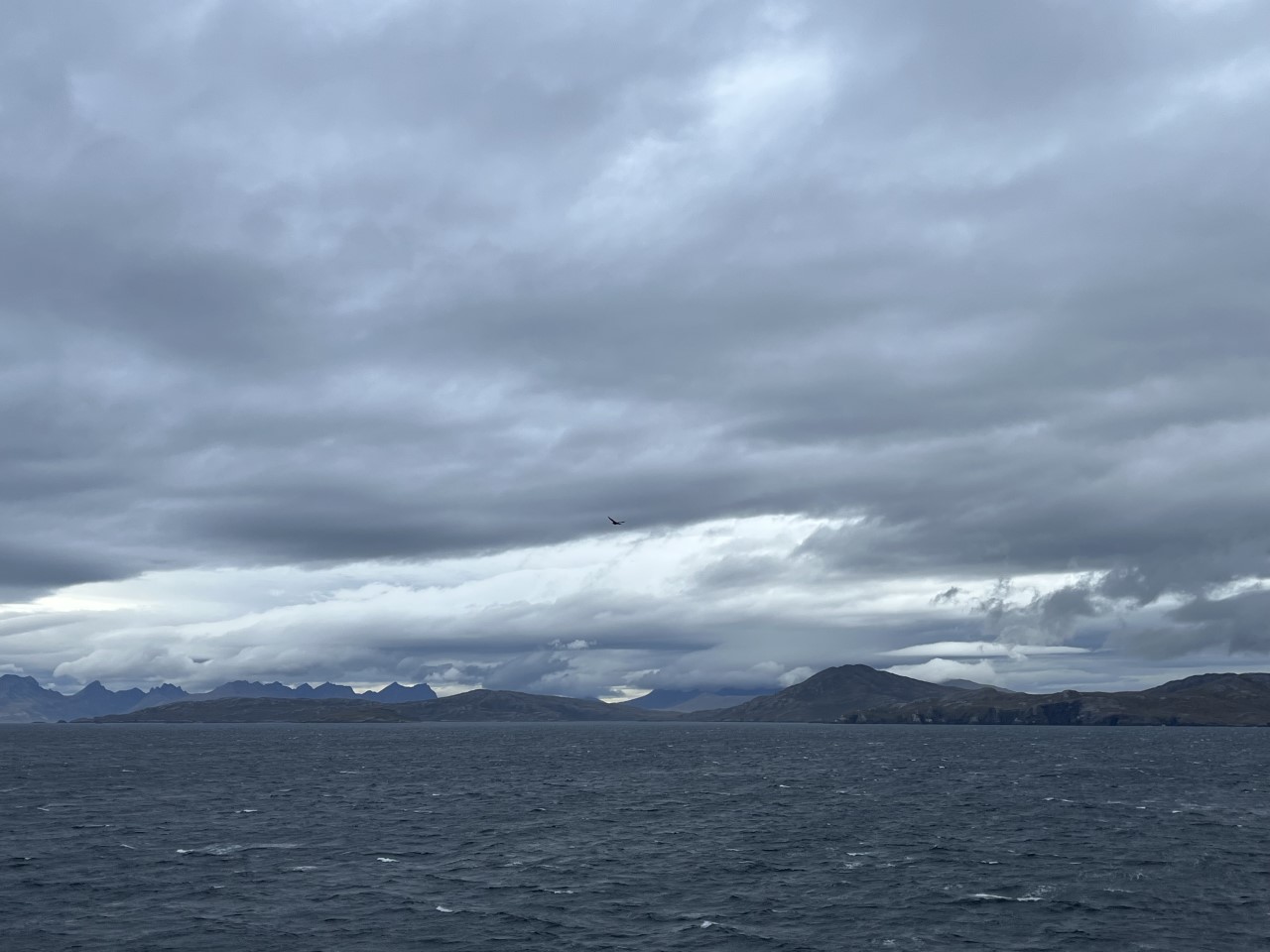 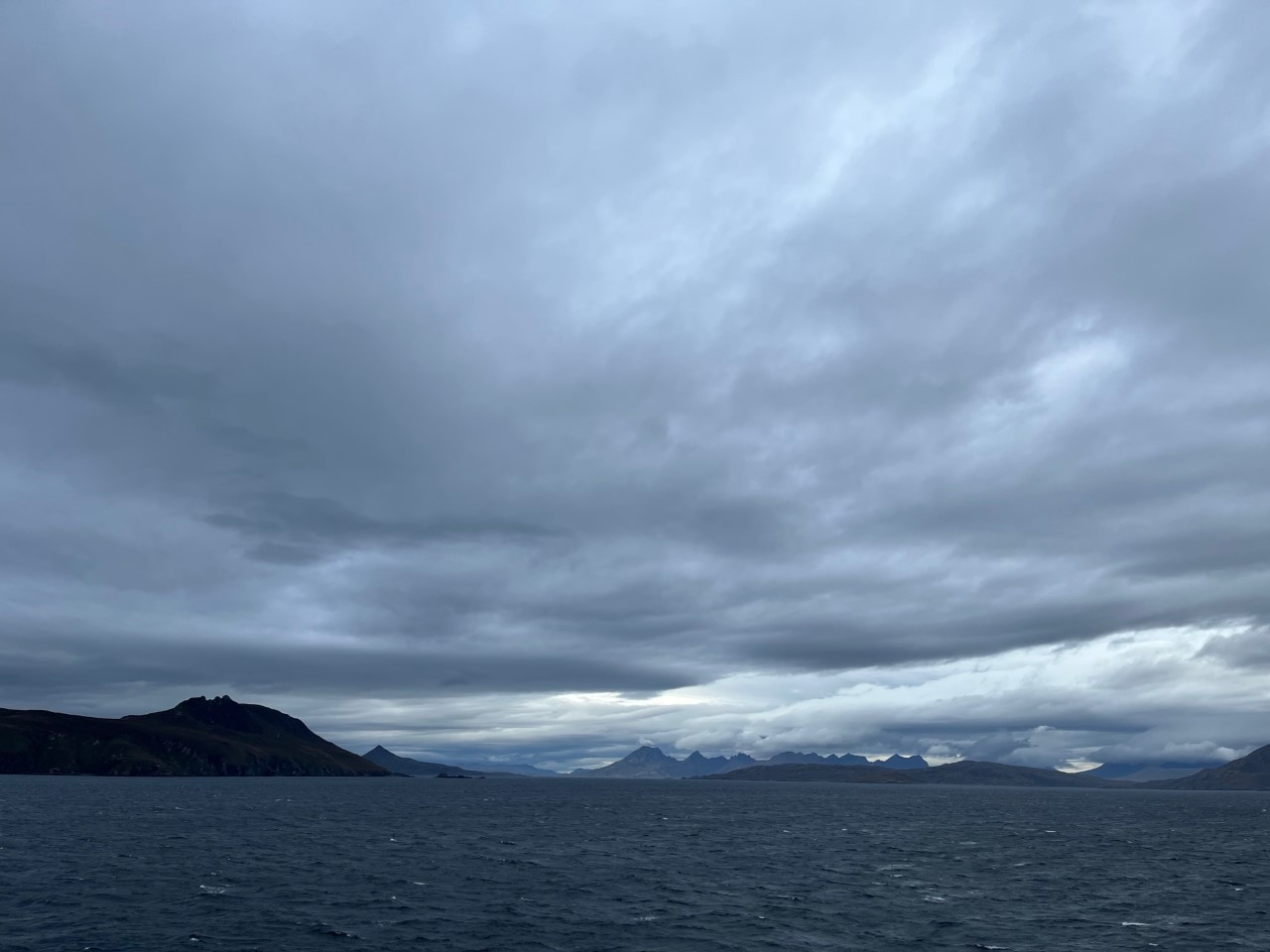 My first lecture was yesterday morning, which was part I of the talk, “The Fuegians, the Beagle, and Charles Darwin: How a Collision of Cultures Influenced Evolutionary Biology”. This was half of my former one-hour talk, and is the first zoom lecture I’ve ever given (rather, it was streamed to the guests’ televisions in their rooms). I have no way of knowing how the passengers reacted, which is a big downside of not having an audience. But so it goes in the days of Covid.

Here’s are two slides I showed as an aside when I mentioned about Darwin’s compulsion for making lists to decide questions. It’s from July 1838, and is a list of the pros and cons of Darwin’s getting married. Reasons to “marry” on the left side, reasons to “not marry” on the right (read more about this list here).  Note the part in red, which you can read more clearly in the transcript below. 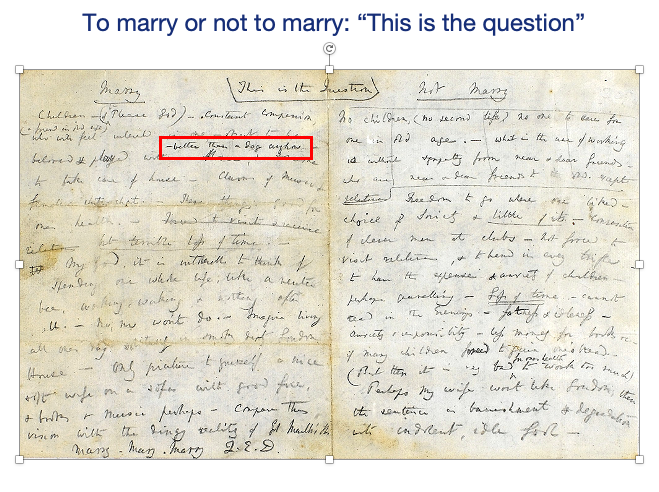 A transcript is below. The part in red above is seen to be part of a reason to marry—”object to be beloved & played with—better than a dog anyhow.”

At the bottom you see Darwin’s decision: “Marry—Mary—Marry. Q.E.D.” And so he did, wedding his cousin Emma Wedgwood in 1839. They had ten children, with seven making it to adulthood. Emma was from the famous Wedgwood pottery and ceramic family, and her wealth gave Darwin the time and means to put together his thoughts on evolution and to write his many books. He became an independent scholar, though he worked so hard I couldn’t call him a “gentleman of leisure.”

I wonder how Emma would feel if the knew Darwin was at one point deciding between marrying her or getting a dog. 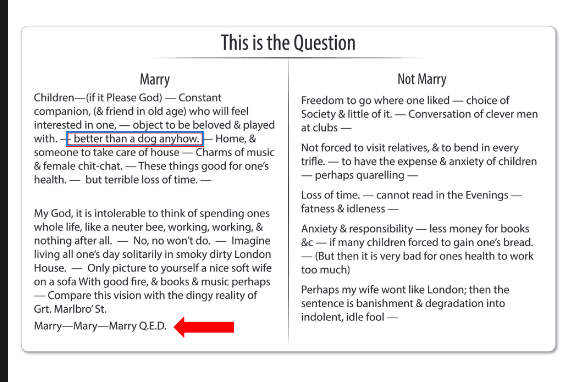 I had a light lunch after the talk. First course, as described, “Potato and Leek Soup”: 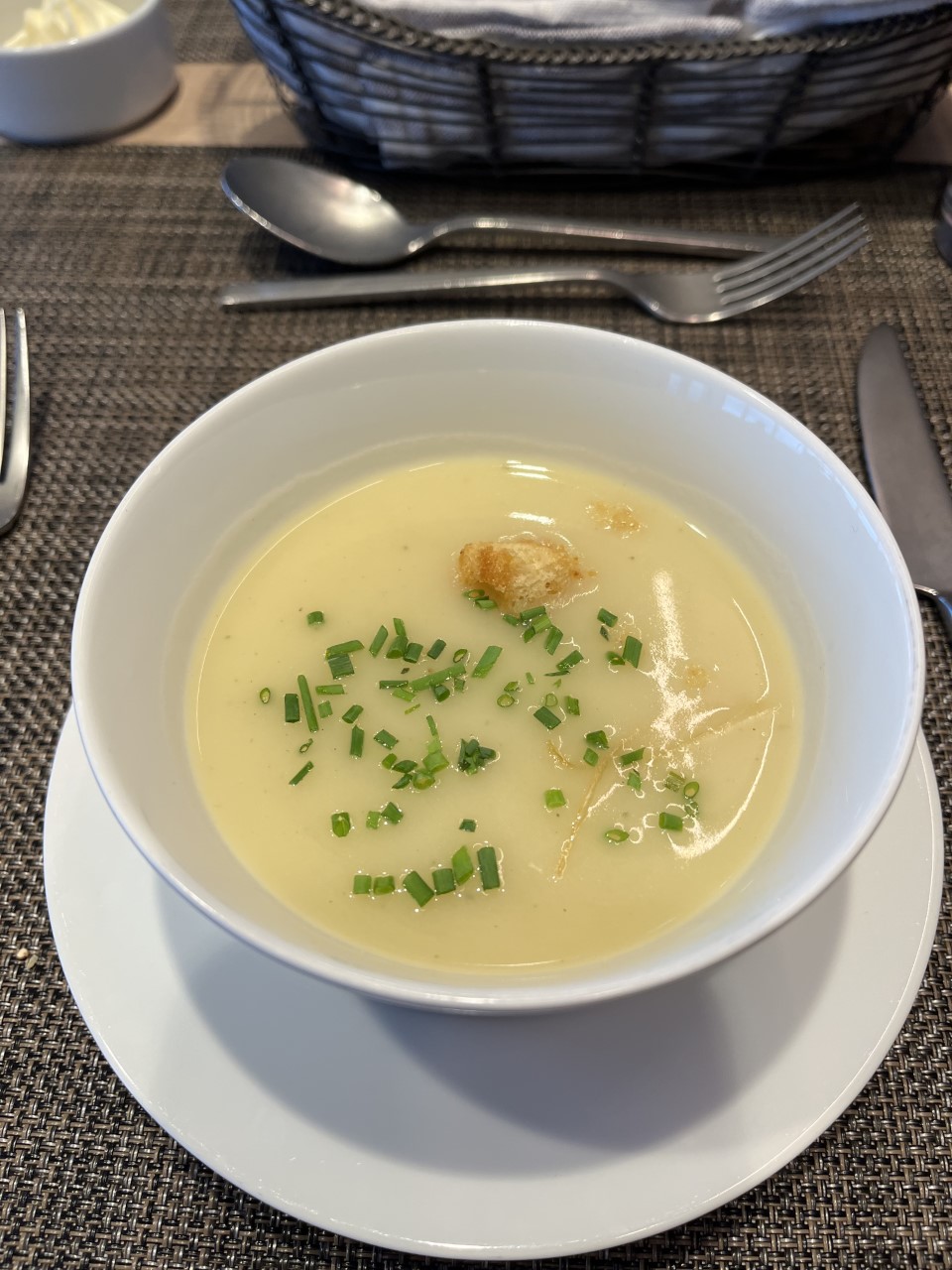 Mains: “Linguini, pesto, parmesan and roasted pinenuts”. This was one of the best dishes I’ve had. 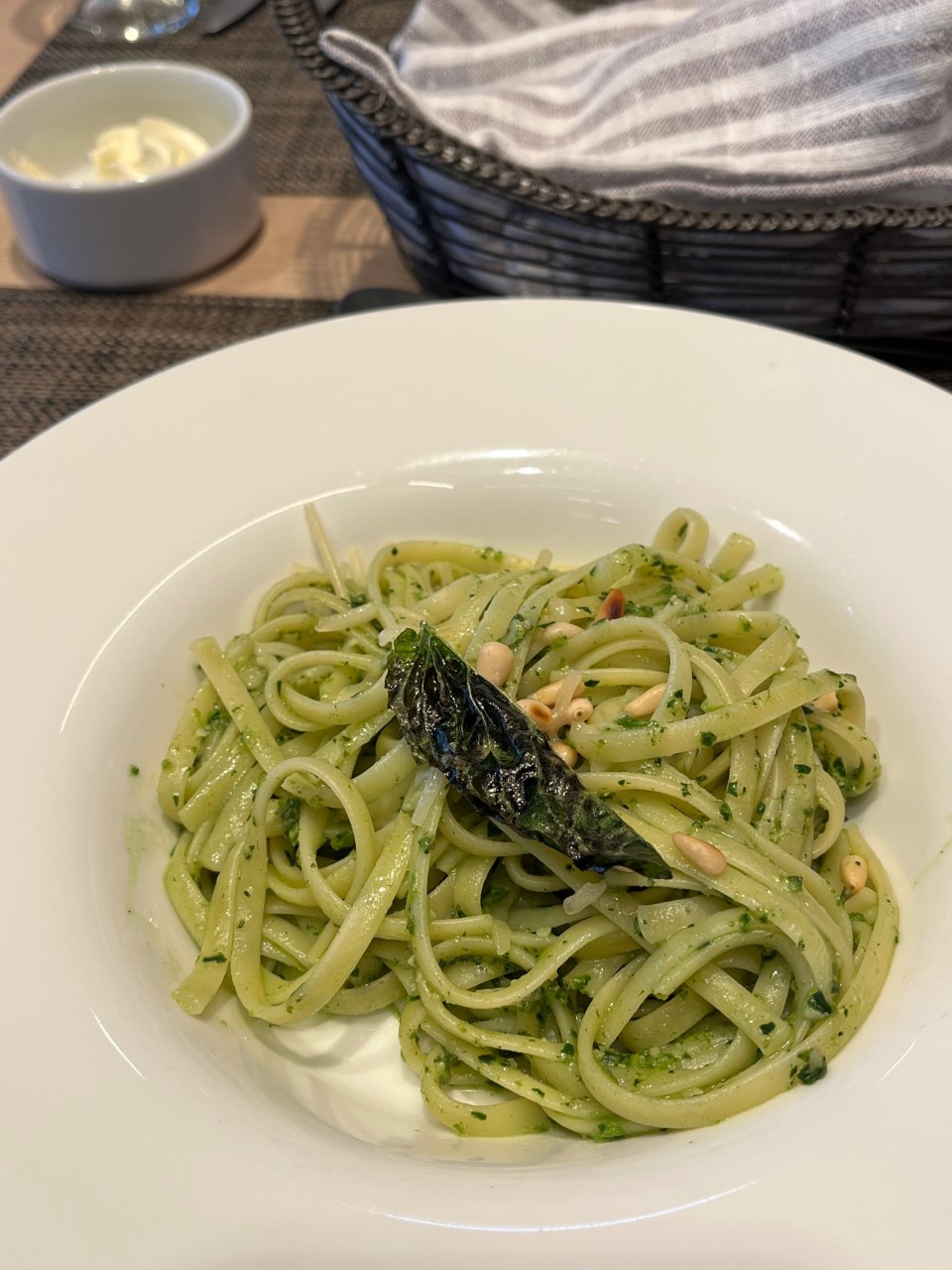 Dessert: “Walnut cake & vanilla custard.” These European-style desserts always seem to have a touch of herbs in them: basil, oregano, or the like, which makes them extra good. 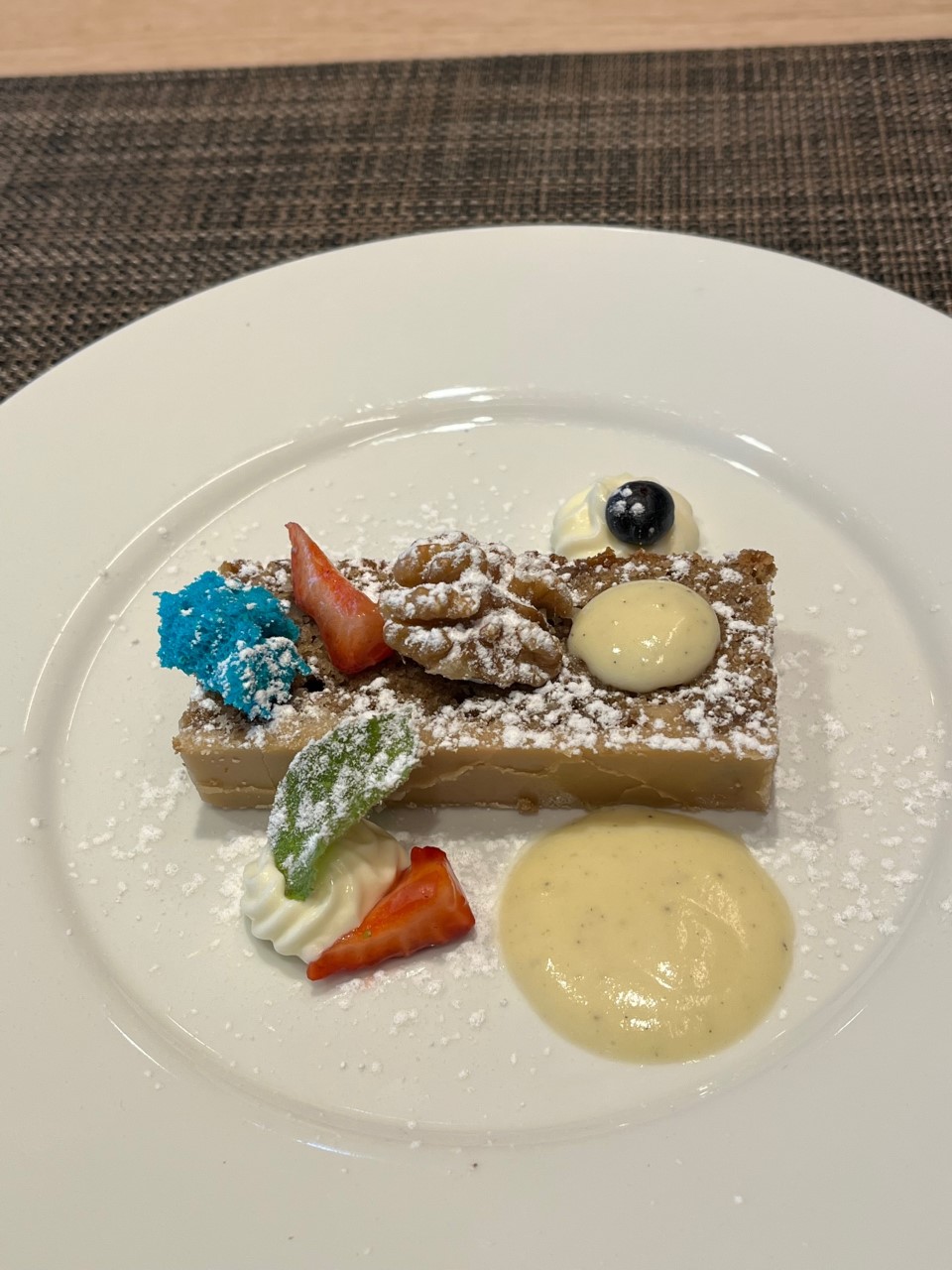