I have to say that I do feel guilty for having an enjoyable lecture tour while war rages in Europe.  But there’s little I can do about it save express sympathy for the brave Ukrainian people. I guess all I can do is to provide a little distraction from the quotidian and depressing news.

For the time being, I’ll ask readers to supply interesting/important news items or, from Wikipedia, important events in history or notables who were born or died on this day.   If you Google the day of the year (but not the year itself), and go to the relevant Wikipedia page (for example, March 4, is here), you’ll find a list of important events, birth dates, and death dates. Perhaps you could mention, for other people’s benefit, one event you find intriguing or a birth or death of a notable you admire.

In other words, because I’m tied up, I am crowdsourcing part of Hili. Help if you can. noticed that people did this spontaneously yesterday, and it was a big help.

Where we are now: roughly halfway to the Antarctic Peninsula (The Amundsen is always circled in these maps.) The seas were very rough last night, but I slept well, which is good as I must lecture twice today. (As I write, the ship is heaving and pitching, and I bet attendance at breakfast is low this morning.) Later today we’ll have a daily report on our activities, but not much happened yesterday as the sea was too rough for our one scheduled activity: a landing on Cape Horn. 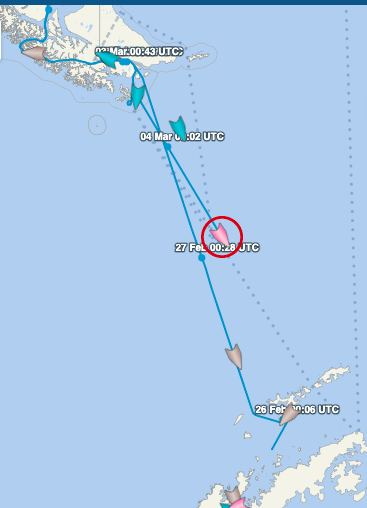 The sea from my balcony: roiling!  (It was also snowing.) At breakfast people were walking around like drunken sailors, and the waiters preferred to serve you at the table lest you fall over with your plate. We did not have the calm “Drake Lake” that seasick-prone passengers hoped for! 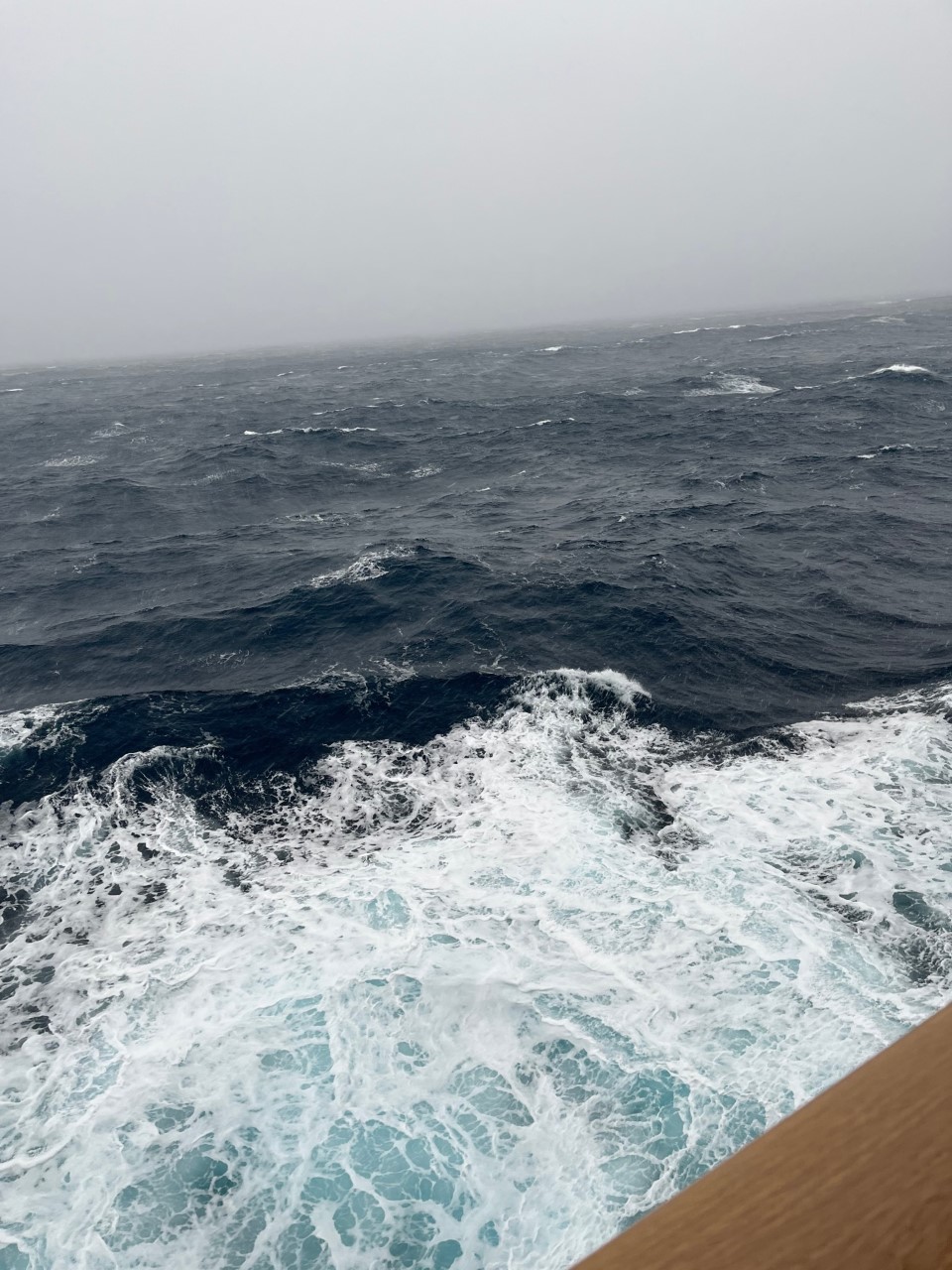 And the view from the ship’s webcam at 8:15 local time: GRAY, with sky and sea indistinguishable and rain all over the lens. Such is the Drake Passage.

Welcome to the first Friday in March: March 4, 2022, to be exact, and National Pound Cake Day.  Why is it called “pound cake”? One site says this:

Pound Cake History – The name (Pound Cake) comes from the fact that the original pound cakes contained one pound each of butter, sugar, eggs, and flour. No leaveners were used other than the air whipped into the batter.

One bit of news for today, which I was going to report the other day but there was no time for news. Famed soprano Anna Netrebko, a Russian national, was let go from future gigs at the Metropolitan Opera, as the NYT reports, “after failing to comply with the company’s demand that she distance herself from President Vladimir V. Putin of Russia as he wages war on Ukraine.” The Met has instituted a policy that “it will no longer hire artists who support Mr. Putin.” Reader Cesar sent his own take on the situation and the Met’s announcement:

I first saw her in 2020/2021 in Prokofiev’s War and Peace (based on Tolstoy, of course) at the Met.  Arguably, she may be the best, or among top 2 or 3, sopranos in the world.  The Met was instrumental in her rise, so this parting is very painful for all (audiences, too).

“Soprano Anna Netrebko has withdrawn from her upcoming Met performances of Puccini’s Turandot this April and May, as well as the run of Verdi’s Don Carlo next season, after not complying with the Met’s condition that she repudiate her public support for Putin while he wages war on Ukraine. “It is a great artistic loss for the Met and for opera,” said Met General Manager Peter Gelb. “Anna is one of the greatest singers in Met history, but with Putin killing innocent victims in Ukraine, there was no way forward.”

Netrebko will be replaced in Turandot by Ukrainian soprano Liudmyla Monastyrska. A replacement for the role of Elisabeth de Valois in the 2022-23 performances of Don Carlo will be announced at a later date.”

We can’t watch YouTube here, but I’ll try inserting this link of one of her performances, and you tell me if it works.  Given the response to my boycott question the other day, I suspect most readers won’t be distressed by Netrebko’s firing, especially because she is a supporter of Putin.

Oh, and Russia is shutting down the remnants of its free press, intent on making everything pro-Putin propaganda.

On Thursday, the pillars of Russia’s independent broadcast media collapsed under pressure from the state. Echo of Moscow, the freewheeling radio station founded by Soviet dissidents in 1990 and that symbolized Russia’s new freedoms, was “liquidated” by its board. TV Rain, the youthful independent television station that calls itself “the optimistic channel” said it would suspend operations indefinitely.

And Dmitri A. Muratov, the journalist who shared the Nobel Peace Prize last year, said that his newspaper Novaya Gazeta, which survived the murders of six of its journalists, could be on the verge of shutting down as well.

“Everything that’s not propaganda is being eliminated,” Mr. Muratov said.

Athayde sent a copy of the cover of The Economist: 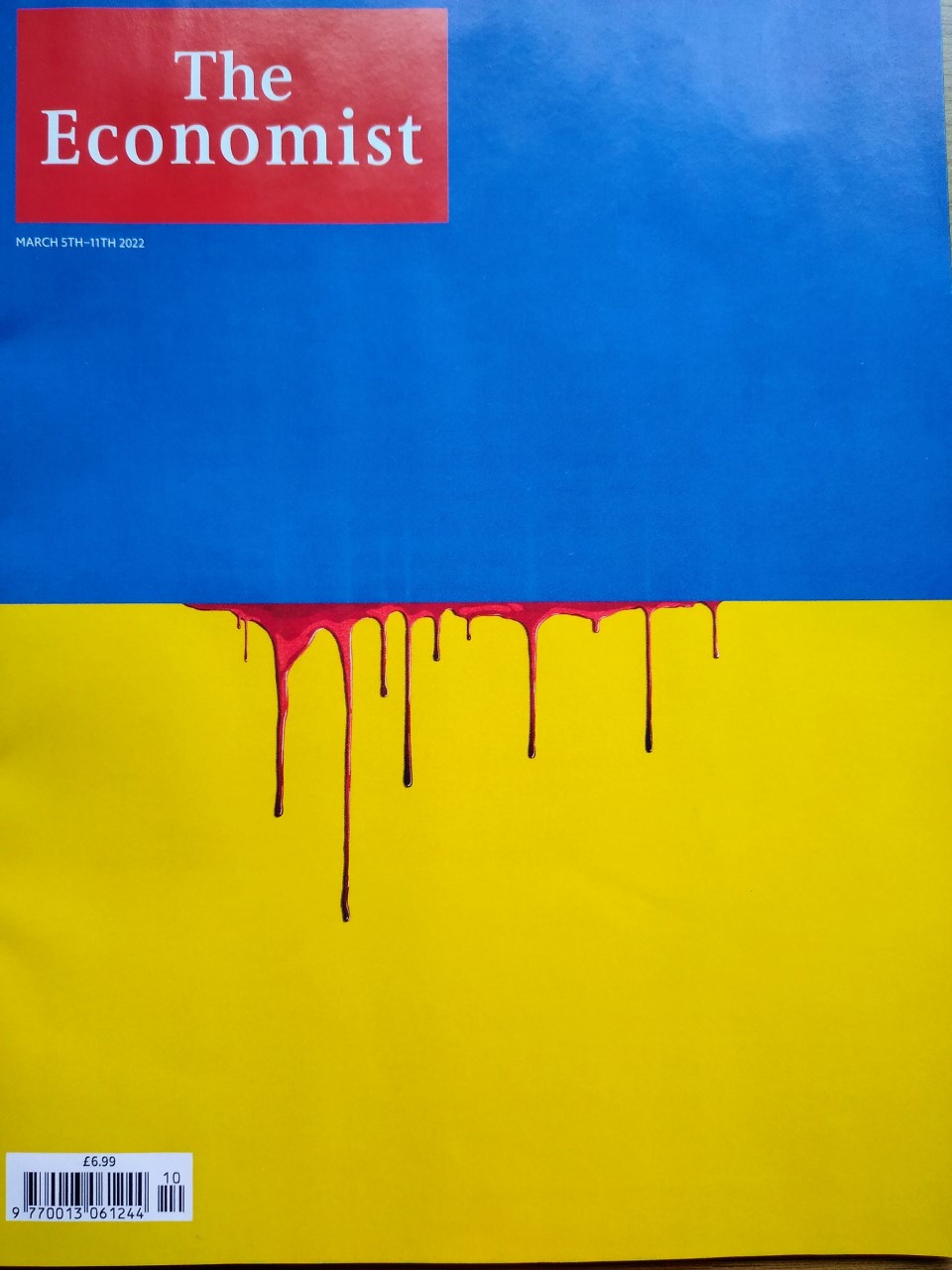 Meanwhile in Dobrzyn, Hili had a vision, but a sacrilegious one:

A: What do you see over there?
Hili: Angels playing quidditch.
A: Luckily the priest doesn’t see it. 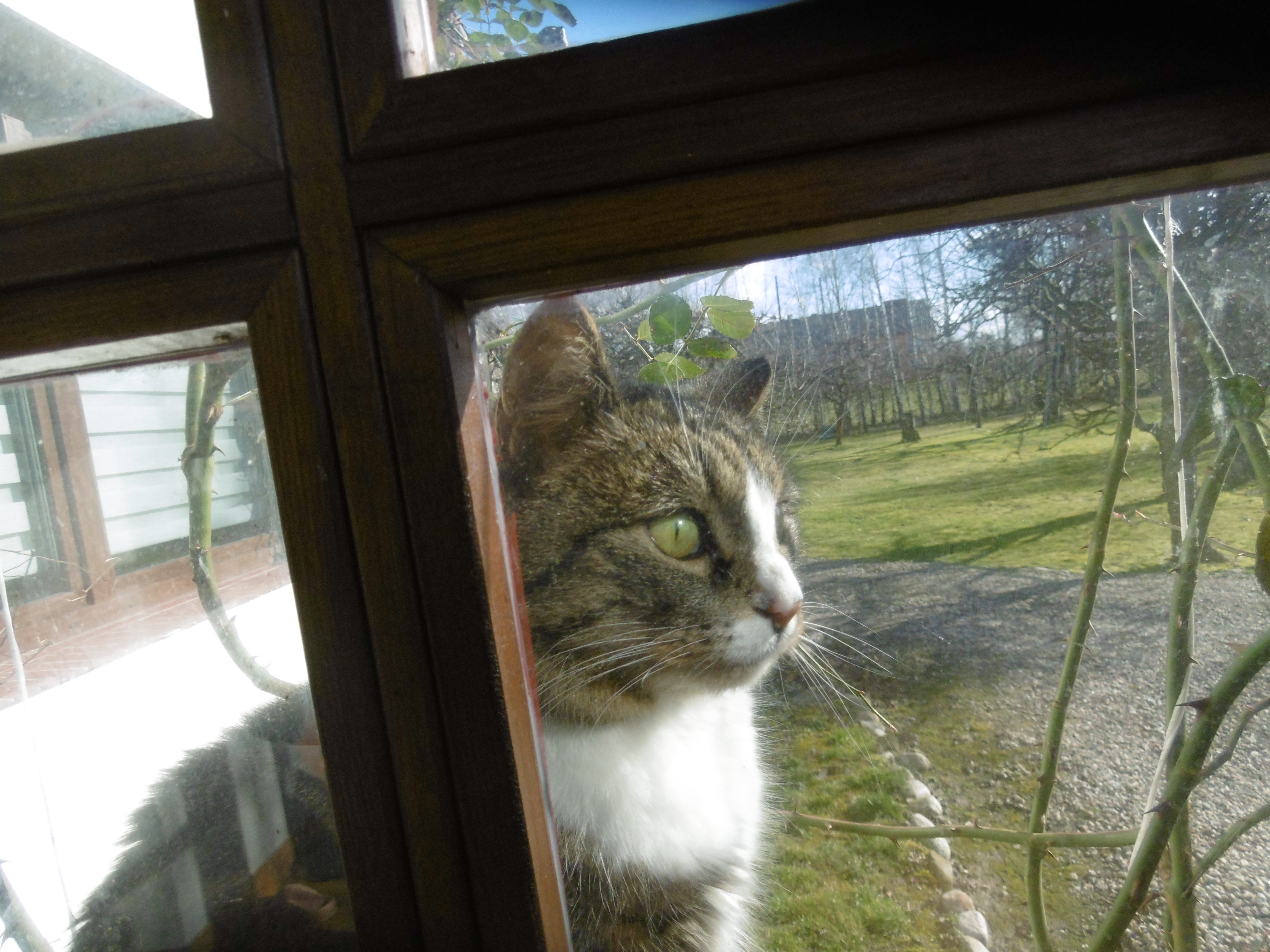 I found this one, clearly put up by a Brit.

I look at this man in awe.

And then I remember my “leader” who couldn’t even tell when he was at a party and blathers on about Peppa pig and Kermit in serious meetings.

FFS UK, we seriously need to up our game when we vote. pic.twitter.com/St71N9DNYp

Reader Terry posted this link elsewhere. I hadn’t realized that Putin was trying to use paratroopers in Ukraine, and that they’d failed miserably. The thread (only first tweet shown) explains why: to the Russians, paratroopers are glorified “riot” police and are useless against the resistant and militant population of Ukraine:

How is the war in Ukraine going? Today they confirmed the death of Russian General Major Suhovetsky. He's unsurprisingly a paratrooper. So let's discuss the role of paratroopers in Russian military doctrine. That'll shed a light on the course of this war and why Russia lost it🧵 pic.twitter.com/aIWsikgFnO

Tweets from Matthew. These Ukrainians are clever. Of course the Russian soldiers don’t believe this woman’s information (sound up to hear them laugh), but i bet that more than a few of them will be testing the prediction the next day!

Woman from Konotop speaks to a Russian soldier: “You do not know our city. Here every second woman is a witch. You won't be able to get a hard-on tomorrow”.#StandWithUkraine pic.twitter.com/kh4uDSW297

Ponomarekno is a defense reporter for the Kyiv Daily Independent:

This is my city, my main square, my nation, and I’m not gonna leave it without a fight.
Putin’s death army sucks ass. pic.twitter.com/EXk7zxrOOw

Kuleba is Ukraine’s defense minister, and is calling for the Allies to enforce a “no fly zone” over Ukraine to keep Russian planes out. But that might mean an intensified war with Russia attacking other countries:

This is a true People’s War for Ukraine. Putin has no chance of winning it. On this photo civilians block Russian invaders in Energodar yesterday. One of hundreds of such photos and videos. We need partners to help Ukraine defend itself. Especially in the air. Close the sky now! pic.twitter.com/Wv2uLMWrD4

Imagine what it feels like to be there. A country that seems likely to be destroyed in less than a month.

One week ago we walking the streets, eating food in cafes and now everything is destroyed.😥😭

Sound up! One thing is nearly certain: after the sanctions and the horrors he’s inflicted, Putin will come out of this looking worse to his own people.

Read the thread about the poor condition of many Russian military vehicles:

A thread – perfect in its geekery – which is the modern application of the old maxim of ‘for the want of a nail’ https://t.co/i2JJKO355i

There’s a Russian T-72 for sale on eBay, pick up only 😆😏 pic.twitter.com/guqZquRRSX

Matthew says: “Seriously, the end is a doozy.” And so it is.

Craziest 2 minutes of TV news ever, with opposing guests on the Ukraine war hosted by Indian TV. the ending is a MUST watch.🤦 pic.twitter.com/1USI8bjHif

Zelensky, an erstwhile comedian who’s become a hero, speaks to his people:

“I don’t want Ukraine’s history to be a legend about 300 Spartans. I want peace.”
Ukrainian President Volodymyr Zelensky addresses his country in the face of the Russian invasion. pic.twitter.com/fXZu6igpsr

Walker is a Guardian correspondent for central and eastern Europe. The Aleppo option, of course, refers to what Putin did to that Syrian city: brutalizing it by regarding all civilians and their support systems as valid military targets (see here). Or, as Goebbels called it in 1943, “totaler Krieg” (“total warfare”).

The videos from Chernihiv this evening seem an extreme escalation even by the standards of this hideous Russian campaign – suggest the Aleppo option for Ukrainian cities is very much on the table: pic.twitter.com/39RIdCHwYE 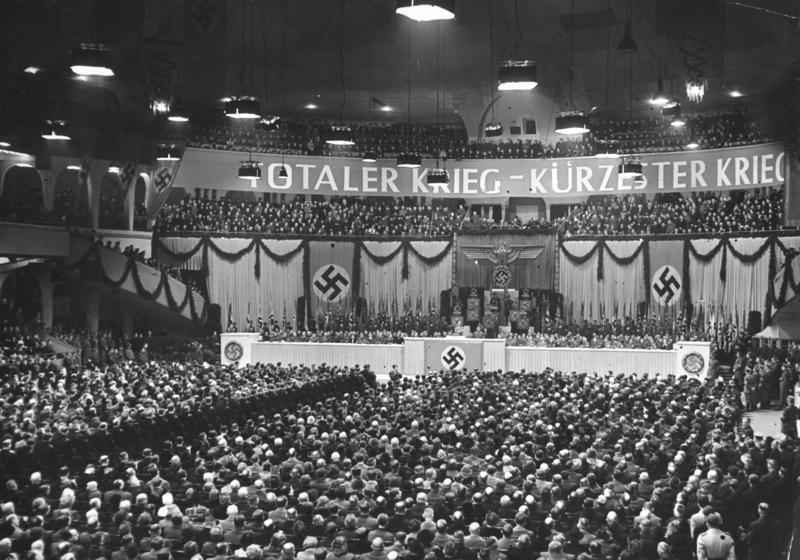 Although Ukraine may be lost, and thousands of civilians killed, I want to end on a note that shows the good in people. This tweet showing Germans going to the Berlin train station to offer fleeing Ukrainians their homes will do.

Thousands of people in Berlin have gone to the central train station to offer fleeing Ukrainians a place to stay. Really moving. pic.twitter.com/OReuMnHcfk