As I’ve written a couple of times, New Zealand is undergoing a dilution of its science education since the increasingly woke government and university administrators have decided that indigenous ways of knowing, called “mātauranga Māori”, should be taught as coequal with science in both high school and university science classes. But the Māori “ways of knowing” are a mixed bag. There’s some “practical” science there, like how to determine which areas are likely to flood, and how to catch eels, but there’s also a whole bunch of mythology and superstition that are simply refuted by modern science. These include a creationist view of existing plants and animals. Teaching both in a Kiwi science class is like teaching evolutionary biology alongside creationism in an American evolution class: it’s a recipe for confusion and divisiveness—and an impediment for those Māori who want to become scientists.

Of course “mātauranga Māori” should be taught in some academic venue, as Māori culture is pervasive and influential in New Zealand.. But the venue should involve anthropology or sociology, not science.

A short while ago, seven professors from Auckland University wrote a letter objecting to the proposed coequal teaching of science and mātauranga Māori. Called “In Defense of Science,” it was published in a weekly magazine called “The Listener”, and you can see it here. In response, the Royal Society of New Zealand is considering punishing or expelling the two signers who are members of the Royal Society of New Zealand. And many NZ academics signed a petition objecting to the letter (do read it; it’s inoffensive to anybody who’s sapient). Dawn Freshwater, the Vice-Chancellor of Auckland University, calling attention to the letter and its signers, declared this:

A letter in this week’s issue of The Listener magazine from seven of our academic staff on the subject of whether Mātauranga Māori can be called science has caused considerable hurt and dismay among our staff, students, and alumni.

While the academics are free to express their views, I want to make it clear that they do not represent the views of the University of Auckland.

As I’ve said, it’s not clear whether the Vice-Chancellor has any authority to declare what the “views of the University of Auckland” are, nor whether there are any official views. It’s clear she is demonizing the professors at the same time she says well, they have the right of free speech—but note that the University can officially criticize them and the Royal Society can punish them! As for the Vice-Chancellor emphasizing the “considerable hurt and dismay” at the University, I consider that a ludicrous form appeal to emotion rather than reason. Are you, as a Kiwi, hurt or dismayed by that letter? Too bad. If you have counterarguments, express them, not your emotions.

In response to the threat of punishment of the letter signers by the Royal Society of New Zealand, which has made that society into a joke, Richard Dawkins wrote a letter to the then chief executive of the Society (you can see his letter here), and also issued a tweet:

Now, in response to a request from some of the letter’s signers, Richard has tweaked his letter and aimed it at the people of New Zealand, not at the Royal Society of New Zealand. It has just appeared in the online version The Listener (bad screenshot below), and will be in the paper edition this weekend. I have permission to publish it, and so have put it below. The original title that Richard gave it was, “Dear New Zealand friends of science and reason,” which the editors changed in the published version below. (They also eliminated a reference to “bollocks”.) I like the original title better.

Since the subject of mātauranga Māori was raised through Letters in July, a global response has been building against the ludicrous move to incorporate Māori “ways of knowing” into New Zealand’s science curricula, and the frankly appalling failure of the Royal Society of New Zealand to stand up for science – which is, after all, what the society exists to do.

The Royal Society of New Zealand, like the Royal Society of which I have the honour to be a Fellow, is supposed to stand for science. Not “Western” science, not “European” science, not “White” science, not “Colonialist” science. Just science. Science is science is science, and it doesn’t matter who does it, or where, or what “tradition” they may have been brought up in. True science is evidence­based, not tradition-based; it incorporates safeguards such as peer review, repeated experimental testing of hypotheses, double-blind trials, instruments to sup­plement and validate fallible senses, etc.

If a “different” way of knowing worked, if it satisfied the above tests of being evidence-based, it wouldn’t be different, it would be science. Science works. It lands spacecraft on comets, develops vaccines against plagues, predicts eclipses to the nearest second, dates the origin of the universe, and reconstructs the lives of extinct species such as the tragically destroyed moa.

If New Zealand’s Royal Society won’t stand up for true science in your country, who will? What else is the society for? What else is the rationale for its existence? I hope you won’t think me presumptuous as an outsider (who actually rather wishes he was a New Zealander) if I encourage you to stand up against this nonsense and encourage others to do so.

I especially love the one sentence, “If a ‘different’ way of knowing worked, if it satisfied the above tests of being evidence-based, it wouldn’t be different, it would be science.” That’s classic Dawkins.

Screenshot of above in online version: 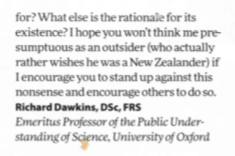 If you are a Kiwi scientist who has the bollocks (or ovaries) to stand up to the government’s, universities’, and Royal Society’s nonsense, and to stand up for reason and the value of science in the only institutionalized “way of knowing”, I ask you to join Richard and the “Satanic Seven.” Yes, I know there are real threats of reprisal should you defend evidence and reason. And you remain silent out of fear, I won’t criticize you. But I suggest that you consider joining Dawkins and the Satanic Seven, lest New Zealand science go down the loo.