If you didn’t like Bari Weiss’s reservations about potential problems with the Biden administration, which include its truckling to the Woke, you’re really not going to like Andrew Sullivan’s latest piece at The Weekly Dish (click on screenshot below). For Sullivan has a take almost identical to Weiss’s, and yet I sympathize with some of his worries.

Click on screenshot to read it (you’ll probably need a subscription, but I’ll give a few quotes). One note: You are free to say what you want in the comments, including that you’re not worried about this stuff, but please don’t tell me that I’m not allowed to have concerns—that now I should be celebrating rather than nitpicking. I am in fact doing both! 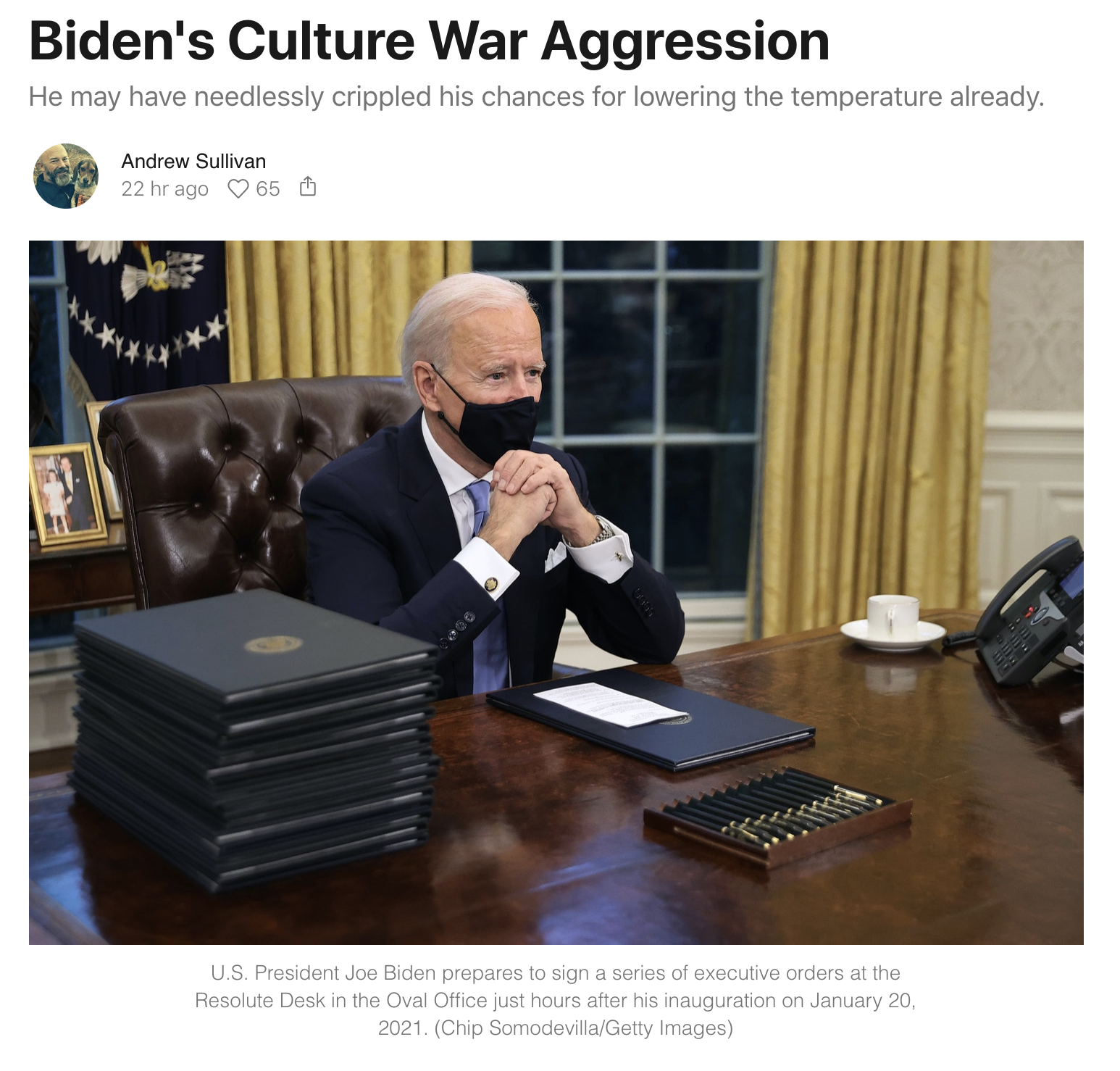 Like Weiss, Sullivan begins (and ends) by expressing some fealty towards Biden and hopes that his administration will succeed. He notes that Biden’s Inaugural speech was uninspiring and in fact anodyne, and Sullivan’s right. But, as I’ve noted before, in those words we saw the real Joe: a decent and straightforward man with a vision, however unrealistic it is. He is not an orator. Sullivan:

But [Biden’s Inaugural speech] matched the occasion: it was conventional, banal even, and anodyne. And how much we’ve missed banality! Biden boldly asked us to be against “anger, resentment, hatred, extremism, lawlessness, violence, disease, joblessness and hopelessness,” and to reaffirm the “history, faith and reason” that provides unity. Sure. Okay. At that level of pabulum, who indeed could differ? And a nation united in pabulum is better than one divided into two tribal camps waging an “uncivil war” against each other about everything.

And if Biden sticks to this kind of common ground, it will serve him well. He is lucky, in many ways, to succeed Trump. Any normal inauguration would feel transcendent after the sack of the capitol.

After praising Joe for his pandemic response, economic stimulus package, energy plan, and so on, Sullivan gets down to business. Here are his areas of concern (Sullivan’s quotes are indented, mine flush left).

1.) Immigration.  The Democrats really need to put together a sensible immigration policy that doesn’t say “open borders” to Americans. If they don’t do this, they’re shooting themselves in the foot, and risk big losses in the midterm elections.

But Biden has also shown this week that his other ambitions are much more radical. On immigration, Biden is way to Obama’s left, proposing a mass amnesty of millions of illegal immigrants, a complete moratorium on deportations, and immediate revocation of the bogus emergency order that allowed Trump to bypass Congress and spend money building his wall. Fine, I guess. But without very significant addition of border controls as a deterrent, this sends a signal to tens of millions in Central to South America to get here as soon as possible. Biden could find, very quickly, that the “unity” he preaches will not survive such an effectively open-borders policy, or another huge crisis at the border. He is doubling down on the very policies that made a Trump presidency possible. In every major democracy, mass immigration has empowered the far right. Instead of easing white panic about changing demographics, Biden just intensified it.

2.) Equity versus equality. It behooves all of us to understand the difference. I hope that Biden does! At present he seems to be bowing before Critical Theory in his executive orders:

Biden has also signaled (and by executive order, has already launched) a very sharp departure from liberalism in his approach to civil rights. The vast majority of Americans support laws that protect minorities from discrimination, so that every American can have equality of opportunity, without their own talents being held back by prejudice. But Biden’s speech and executive orders come from a very different place. They explicitly replace the idea of equality in favor of what anti-liberal critical theorists call “equity.” They junk equality of opportunity in favor of equality of outcomes. Most people won’t notice that this new concept has been introduced — equity, equality, it all sounds the same — but they’ll soon find out the difference.

In critical theory, as James Lindsay explains, “‘equality’ means that citizen A and citizen B are treated equally, while ‘equity’ means adjusting shares in order to make citizen A and B equal.” Here’s how Biden defines “equity”: “the consistent and systematic fair, just, and impartial treatment of all individuals, including individuals who belong to underserved communities that have been denied such treatment, such as Black, Latino, and Indigenous and Native American persons, Asian Americans and Pacific Islanders and other persons of color; members of religious minorities; lesbian, gay, bisexual, transgender, and queer (LGBTQ+) persons; persons with disabilities; persons who live in rural areas; and persons otherwise adversely affected by persistent poverty or inequality.”

In less tortured English, equity means giving the the named identity groups a specific advantage in treatment by the federal government over other groups — in order to make up for historic injustice and “systemic” oppression. Without “equity”, the argument runs, there can be no real “equality of opportunity.” Equity therefore comes first. Until equity is reached, equality is postponed — perhaps for ever.

I’m not sure that Biden’s definition adheres to the equity limned by Lindsay. All we can do is wait and see what Biden proposes. His executive order does seem to conflate “equity” and “equality of opportunity,” so someone should at least tell Joe the difference.

I think that for the near future the Democratic policy should be a combination of both equity and equality: some affirmative action but with the real work—and the hard work—being done on the level Sullivan notes in the paragraph just below. For the truth is that until equality is reached, equity won’t follow except though some kind of affirmative action. Like Sullivan, my goal is equality: equality of opportunity for all, which means removing the barriers to achievement that have impeded oppressed groups for decades. That takes a huge influx of effort and money into poor communities, and I’d hope we have the will and the funds to do that. But I’d throw some equity in there, too, for a government that at least doesn’t in part include representatives from all groups loses its credibility. Sullivan sees Biden adhering to the Ibram X. Kendi view of racial equity. I’m not yet sure of that, but Biden does seem to be going in that direction.

Sullivan saying, correct, what we really need to do:

Helping level up regions and populations that have experienced greater neglect or discrimination in the past is a good thing. But you could achieve this if you simply focused on relieving poverty in the relevant communities. You could invest in schools, reform policing, target environmental clean-ups, grow the economy, increase federal attention to the neglected, and thereby help the needy in precisely these groups. But that would not reflect critical theory’s insistence that race and identity trump class, and that America itself is inherently, from top to b

Biden’s executive order on “LGBTQ+” is also taken directly from critical gender and queer theory. Take the trans question. Most decent people support laws that protect transgender people from discrimination — which, after the Bostock decision, is already the law of the land. But this is not enough for Biden. He takes the view that the law should go further and insist that trans women are absolutely indistinguishable from biological women — which erases any means of enforcing laws that defend biological women as a class. If your sex is merely what you say it is, without any reference to biological reality, then it is no longer sex at all. It’s gender, period. It’s socially constructed all the way down.

Most of the time, you can ignore this insanity and celebrate greater visibility and protection for trans people. But in a few areas, biology matters. Some traumatized women who have been abused by men do not want to be around biological males in prison or shelters, even if they identify as women. I think these women should be accommodated. There are also places where we segregate by sex — like showers, locker rooms — for reasons of privacy. I think that allowing naked biological men and boys to be in the same showers as naked biological women and girls is asking for trouble — especially among teens. But for Biden, this is non-negotiable, and all objections are a function of bigotry.

And in sports, the difference between the physiology of men and women makes a big difference. That’s the entire point of having separate male and female sports, in the first place. Sure, you can suppress or enhance hormones. But you will never overcome the inherited, permanent effects of estrogen and testosterone in childhood and adolescence. Male and female bodies are radically different, because without that difference, our entire species would not exist. Replacing sex with gender threatens women’s sports for that simple reason.

Now people have said these are “quibbles” I’m less worried about locker rooms than about sports, prisons, rape counseling and women’s problems. Granted, these are not as pressing as are issues of inequality, climate change, and economics.) But they’re not quibbles, for a). they bear on issues of fundamental fairness, and those issues won’t go away; and b). the way Biden’s administration works this out will have consequences for the acceptance of the Democratic Party as a whole—for our continuing control of the House and Senate (the Supreme Court is already lost for several decades). And remember, Biden casts himself not as a messenger of Wokeness, but as a healer. If he’s to heal, he has to realize that most Americans want a sensible immigration policy, want equality but only a temporary remediation of inequity via affirmative action, and don’t want untreated biological men serving time in women’s prisons or participating in women’s sports. So far Biden’s policies seem to me way too conciliatory towards Critical Theory. That is to be expected if he’s clueless about Critical Theory and also keen to not be called a racist by more leftist Democrats.

I wonder if Joe Biden even knows what critical theory is. But he doesn’t have to. It is the successor ideology to liberalism among elites, a now-mandatory ideology if you want to keep your job. But Biden’s emphatic backing of this illiberal, discriminatory project on his first day is relevant. He has decided to encourage “unity” by immediately pursuing policies that inflame Republicans and conservatives and normies more than any others.

And those policies are obviously unconstitutional. . .

. . . I want Biden to succeed. I want Republicans to moderate. I want to lower the temperature. I want to emphasize those policies that really do bring us closer together, even though many may still freely dissent. Biden says he wants to as well. But none of that can or will happen if the president fuels the culture war this aggressively, this crudely, and this soon. You don’t get to unite the country by dividing it along these deep and inflammatory issues of identity. And you don’t achieve equality of opportunity by enforcing its antithesis.

I’ve quoted too freely here, and you should pay the $50 per year to read Sullivan (and perhaps Bari Weiss), because they’re good writers, because they may have views that don’t exactly jibe with yours, and because you need to read something besides the New York Times and Washington Post, which have already caved to Critical Theory. Actually, I pay $4 per month to read the NYT, so I’m paying more to read Sullivan (and Weiss, if I subscribe) than to read whole newspapers. I’ll live.

Yes, we can and should celebrate the unexpected victory of the Democrats as well as their takeover of Congress. But remember too that Biden promised to heal, and you won’t heal America by imposing Critical Theory on it.

45 thoughts on “Like Bari Weiss, Andrew Sullivan is pro-Biden but worried”