Happy Caturday! We have the usual three items today, plus lagniappe if you’ve been a good girl or boy (or whatever). First, a New Woker video from Open Culture, “Why Humans are obsessed with cats“, narrated by Abigail Tucker, a writer who produced the 2017 New York Times bestseller The Lion in the Living Room: How House Cats Tamed Us and Took Over the World (that was the book I wanted to write!). She’s also married to columnist Ross Douthat, but I won’t hold it against her.

There’s more text at the Open Culture site, but the nice seven-minute video below says most of what’s important. Her take on why cats are so appealing is spot on. Tucker brings up toxoplasmosis, but I don’t pay attention to that.  Pay attention instead to the “werewolf cat” and then the Bengal Cats at about 5:20.

From reader Rick we get a three-minute video showing a magnificent lynx. The gorgeous cat jumps atop a Canadian logging truck to suss out the operator and his vehicle. Look at the size of its paws!

Occurred in February 2020 / Rocky Mountain House, Alberta, Canada “I am a logger from Alberta, Canada. I was stopped on the road with my skidder and looked back and to my great surprise, there was a Lynx standing by the tire on my machine. I quickly climbed on the roof and started videoing. He then jumped up on the tire, looked at me, and then jumped again on the arch of my skidder. Only a few feet from me now, he sat and curiously watched me. After a few minutes, he jumped back down on my tire and then with one great big leap, jumped off the tire back on the ground and slowly walked back into the forest never to be seen again.”

This lynx looks a bit thin, as if it needs a few snowshoe hare sandwiches.

Here’s a Washington Post article about rapper Sterling Davis, who gave up his singing and traveling life to. . .

. . . change litter boxes at the Atlanta Humane Society. Then in 2017, he gave himself a new nickname — “TrapKing” — and started a company to humanely trap stray cats, get them spayed, neutered and microchipped, and return them to where they came from. He says the name is a play off the term “rap king,” an honorific bestowed on hip-hop’s best lyricists.

Click on the screenshot to read the piece. I’ll give an excerpt and show a few photos:

Davis, 40, now runs his company, TrapKing Humane Cat Solutions, from his RV, visiting predominantly Black neighborhoods throughout the metro Atlanta area to trap feral felines and educate people about the importance of caring for strays.

“I like to teach kids that the ‘crazy cat lady’ down the street who is feeding all the strays isn’t actually so crazy,” he said. “She’s doing what she can to help. And anyone can do the same.”

The practice of TNR — trap, neuter, release — is the humane alternative to euthanasia for stray cats, Davis added.

“Strays don’t usually do well in homes, but they help with rodent populations,” he said. “So it’s important to neuter them and return them where you got them in order to humanely control their numbers.”

When he went out on his own with his company, Davis sold all his belongings and lived in a van covered with “TrapKing” stickers so that he could afford to have cats neutered and spayed, he said. He now gets funding from donations, mostly through his website, and says he takes a small salary from the company.

He’s since upgraded to an RV, which he shares with three cats named after some of his favorite singers — Damita Jo (Janet Jackson’s middle name), Bowie and Alanis Mewissette.

The back of his RV is outfitted with plenty of room for cages holding the stray cats he picks up each day after enticing them into traps with treats of chicken or mackerel, he said.

The Humane Society now covers the cost of spaying and neutering, said Davis, so he’ll park at the shelter at night to be the first one in the door the next morning. Before the pandemic hit, he also spent a lot of time speaking at schools about his affinity for felines.

. . .With so many stray cats roaming the streets, his cause often feels overwhelming, admitted Davis.

“But if we can get kids to care about these cats and especially teach boys that it’s okay to love them, maybe there’s some hope,” he said.

Lagniappe: Reader Will Meyer sent a picture of his cat and wants to know if other readers have seen this phenomenon:

Do other cats do this Walrus Pose?  Or is it just our Manny?  We’ve known many cats over the years and no other crossed their back legs like this.  Your views?

I haven’t seen it, but perhaps other readers have. Here’s Manny: 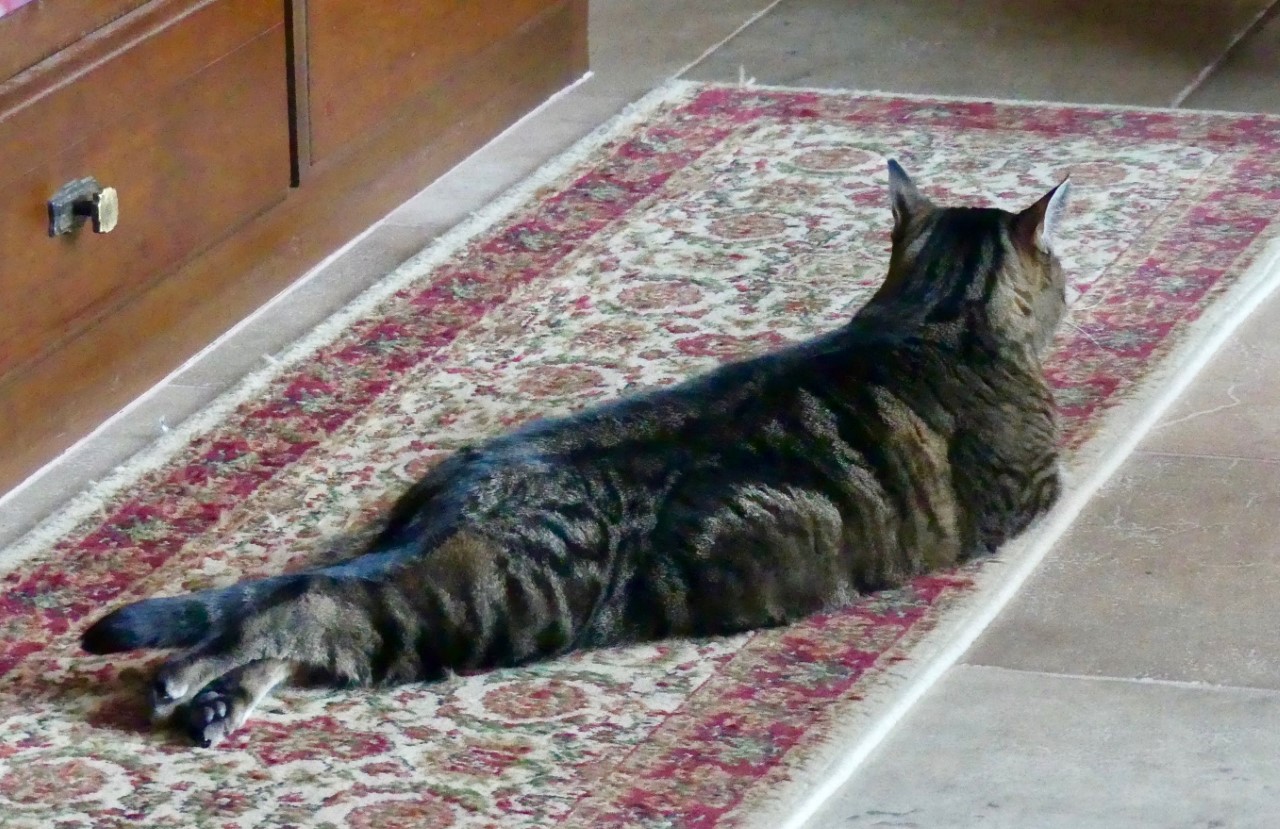 15 thoughts on “Caturday felids trifecta: Why people are obsessed with cats; lynx climbs on a logging truck; the rapping cat man of Atlanta (and lagniappe)”