I just talked to a friend, and we shared our feelings about the new Biden administration. We were both relieved and hopeful, but when I expressed some of the same worries that Bari Weiss does in her new Substack column (below), my friend admonished me: “Oh, don’t look for needs in haystacks, enjoy the relief!”  I responded that I was a Jew, and therefore could be elated for one hour at most—the duration of the Inauguration. After that, the worries set in again. I think this is a legacy from our history: a pogrom was always around the corner. If one was a genetic determinist, one could argue that a form of natural selection was at play: the nervous and anxious Jews who were the ones who survived.

At any rate, I told my friend that the best one can do as a “glass-half-full” Jew is complacency, not unalloyed happiness.

Perhaps that’s also true for Ms. Weiss, also Jewish but, unlike me, religiously so. She’s worried about the Biden administration, or, rather, that people are ignoring potential problems with the administration down the line. Click on the screenshot to read about Weiss’s angst. Her site will be free for the time being, but do consider subscribing. I am waiting a few weeks to decide. This week, though,  it’s pretty good. For one thing, she limns the content of her column, which emphasizes political hypocrisy and inconsistency:

I’ll be focusing on topics where the mainstream media gets . . .  confused. Remember this summer, when it decided that anyone who did not want to defund the police was considered a right-winger? Or that to use national guardsmen to keep the peace was considered unthinkable on June 6, but by January 6 was bipartisan national policy?  Or that Big Tech’s power was terrifying and evil, until it was used to put down Parler? Or that anyone who violated the lockdowns denied science, unless they were marching for the right political cause? 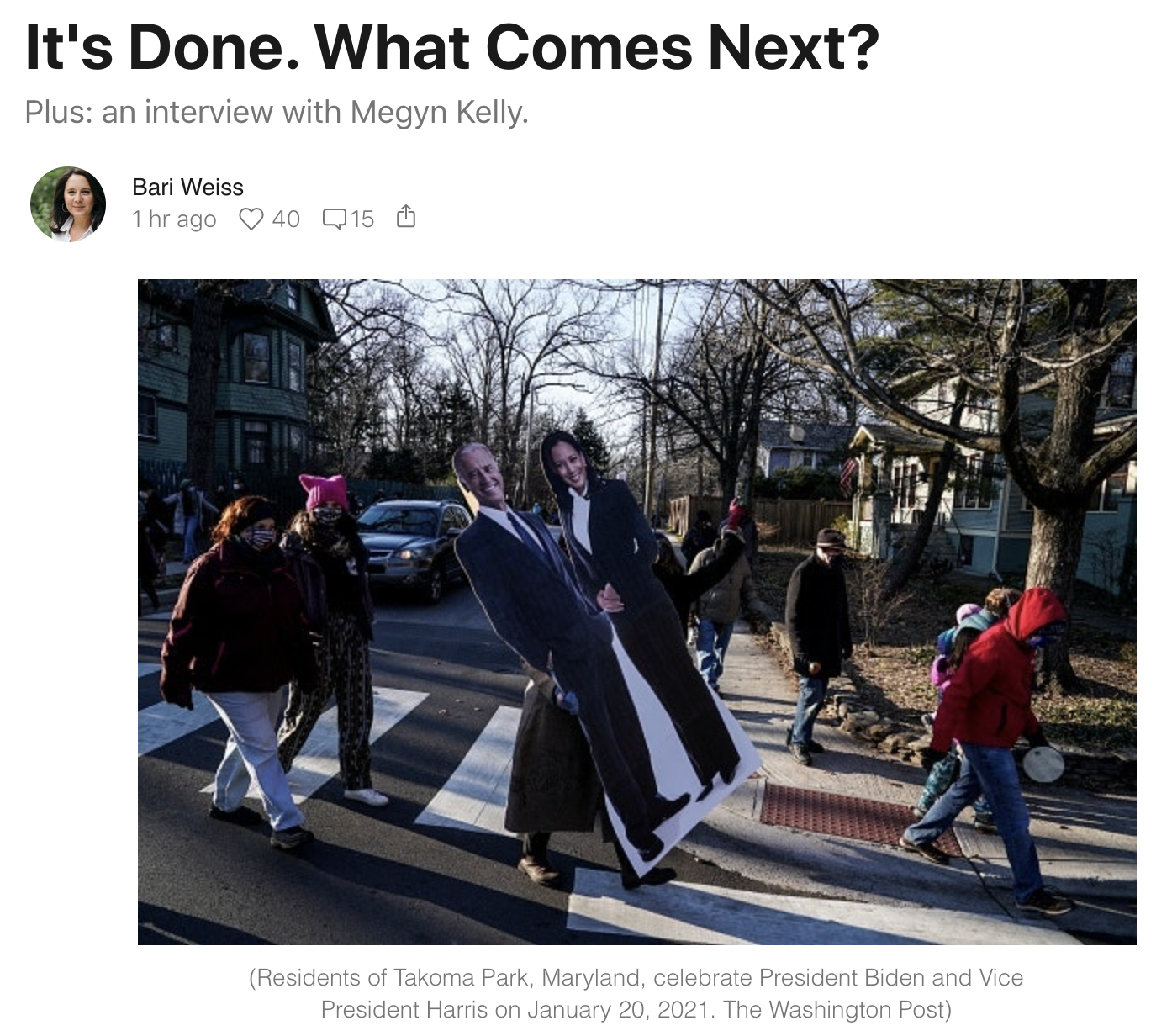 After the ritual (and necessary) statement that Weiss detested Trump and voted for Biden, she says a few words about her fractious experiences at the New York Times:

If I were still at a newspaper, I’d be compelled to write something about the inauguration — a riff about how it’s morning again (again) in America; the powerful symbolism of Eugene Goodman, the heroic police officer who faced down the rioters, escorting the vice president; Lil Wayne’s pardon.

But I am no longer at a newspaper. That’s because my politics — center-left on some issues, center-right on others, a centrism that most Americans still occupy — were unwelcome. I see the ideological capture and institutional transformation that occurred at The Times as a sign of what’s to come these next four years. Which leads me to the purpose of my newsletter and what I hope to cover in the Biden era.

I voted for Joe Biden. I think that he is past his prime. I also think he is an eminently decent and kind man. That fact that his decency seems positively refreshing is a tragic sign of where we are. But it does. And I welcome it.

I’ve said it many times, but I will say it here again: Trump was a malignant narcissist. Seeing that did not require a psychology degree. He coarsened everything and everyone he touched. He trashed all of our guardrails. He hastened our undoing.

. . . The truth is that Joe Biden is a fig leaf. He is a fig leaf for the deep problems that roil our country, for the totalizing ideologies spreading through the nation like wildfire, and for the dramatic political realignment that we are living through.

Weiss, properly, sees problems on both the Right and Left: the polarization that leads to the unrealistic expectations we’ve heaped on Biden, the Woke on the Left and the bigotry and fascism on the Right, with authoritarianism at both poles.

And so Weiss proposes “five litmus tests for the Biden era”. I’ll just give her headers and a few of her words (and my take) on each, as you should read her column (and consider subscribing).

Will the Biden administration make the case that America is good?

That’s not sarcastic or rhetorical. And it’s not a question about what’s in Joseph R. Biden’s heart.

I mean: Will his administration embrace the new re-understanding of America that shot through the streets this summer and issues forth daily from the mouths of our elites? That view goes like this: America was born for the purpose of upholding white supremacy and it remains irredeemably racist. Our founders were not primarily political geniuses but slaveholders who wanted to find a way to hoard their property. And while the rioters may have gotten a little out of hand, they weren’t wrong to target statues of men like Lincoln. . .

Yes, Biden will embrace that woke re-understanding. It’s already doing so. I didn’t realize that the power of the Woke rests in their ability to demonize others on the Left by calling them racists or bigots.

Will neo-racism be normalized?

A few months ago I spoke to a Trump administration official who confirmed that the president wouldn’t know what Critical Race Theory was if it smacked him in the face. Nevertheless, in September of 2020, Trump passed an executive order banning training for federal agencies and federal contractors that relies on this ideology. . . .

Biden just reversed this order, so CRT can be taught to our kids again. Not a good move, and another Biden order that worries me. It is not a conciliatory move, but a divisive one. Every white kid in America will now be taught that he/she/etc. carries a burden of guilt and is a racist whether they know it or not.

Will cancel culture become the culture?

Cancelling has become a normal part of American life. We are no longer surprised when someone is fired for a bad tweet, or when a publisher drops an author for an unpopular view, or when teenagers spy on one another like little Stasi and adults applaud.

But all of that could be child’s play compared to what will come from the strong alliance between the Democratic Party and the press, which are advocating that major tech companies crack down on “hate,” or “disinformation,” which has quickly become a synonym for “information I don’t like.”

Yes, expect more censorship and even more cancellation of those with the Wrong Opinons.

Can you make a living in the wealthiest country in the world?

One in five small American businesses will not make it through this pandemic. Dave Portnoy from Barstool Sports seems to care more about that number more than anyone in Congress.

We live in the wealthiest country in the world, yet the three jobs with the most projected growth all earn less than $28,000 a year. They are home health and personal care aides at $25,280; fast-food and counter workers at $22,740; and restaurant cooks at $27,790, according to the Bureau of Labor Statistics. . .

Economics is beyond my bailiwick, so I’ll just wait and see.

This is what I worry most about: the continuing division in America that Biden has promised to heal. But I think if you’ve kept your eyes and ears open over the last few years, you’ll know that while Biden’s words sound good and soothing, they’re malarkey. How will Biden bring together Democrats and Republicans, each party hating the other and thinking it’s the embodiment of Satan?

Is there a way to end our ongoing uncivil war?

When the 46th president said at the inauguration that “disagreement must not lead to disunion,” and that “we must end this uncivil war,” I nodded along. Then I thought about the fact that serious people are calling for enemies’ lists and the banning of Fox News, and I wondered how, really, we could put an end to our current uncivil war.

Half of Americans say that other Americans — not poverty; not China — pose the biggest threat to the country.

During one of the presidential debates, Marianne Williamson set off a thousand memes when she said: “If you think any of this wonkiness is going to deal with this dark psychic force of collectivized hatred that this president is bringing up in the country, then I’m afraid Democrats are going to see some very dark days.” People laughed. But she got it mostly right.

If you think stability and normalcy are about to return to America, ask yourself if you said that there was no way in hell that Donald Trump could win the White House.

That last sentence should make you stop and think.

There’s also a podcast interview in which Megyn Kelly, conservative former broadcaster for Fox News (and then NBC News) interviews Weiss. I listened to 40 minutes of the 100-minute interview, and it wasn’t bad—so long as Weiss was talking. I found Kelly’s take too conservative and predictable, and I still remember her cringeworthy statements at Fox.

I suspect I’ll wind up subscribing to either Weiss or Sullivan (I already subscribe to him) but not both. In the meantime, I’ll read their weekly columns.

35 thoughts on “Bari Weiss: Worries about Biden and the Dems”