Well, we have another cancellation by the Woke Left.

A new book by Edward Ball came out on August 4 (click screenshot below) about the author’s investigation of an ancestor who was a member of the Ku Klux Klan right after the Civil War. Highly praised, it apparently paints a sad and devastating picture of how white supremacy had a resurgence in New Orleans after the Civil War, when blacks gained equal rights in Louisiana. 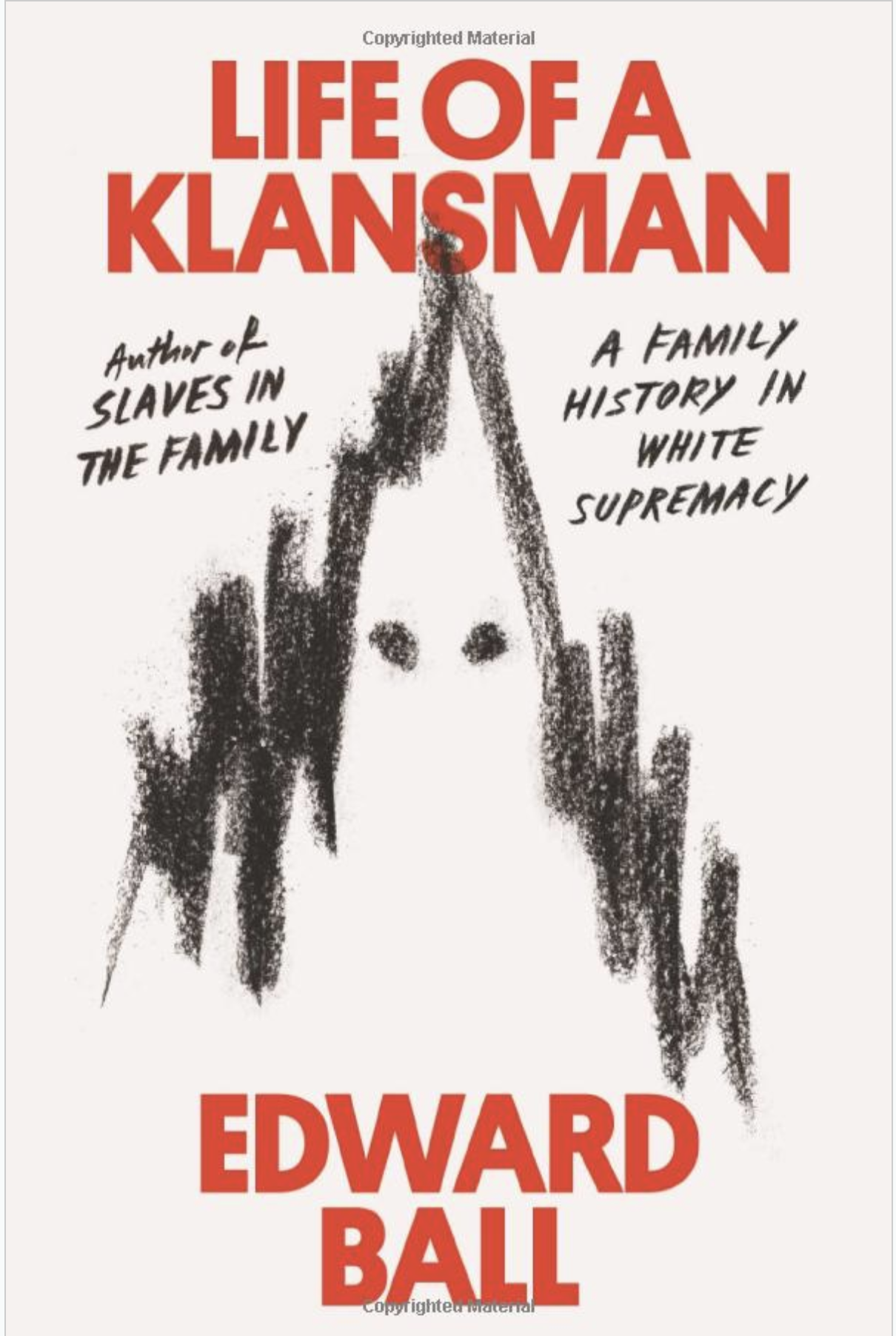 Here’s a precise and some of the praise for the book on its Amazon site (click on screenshot above; their emphasis):

Life of a Klansman tells the story of a warrior in the Ku Klux Klan, a carpenter in Louisiana who took up the cause of fanatical racism during the years after the Civil War. Edward Ball, a descendant of the Klansman, paints a portrait of his family’s anti-black militant that is part history, part memoir rich in personal detail.

Sifting through family lore about “our Klansman” as well as public and private records, Ball reconstructs the story of his great-great grandfather, Constant Lecorgne. A white French Creole, father of five, and working class ship carpenter, Lecorgne had a career in white terror of notable and bloody completeness: massacres, night riding, masked marches, street rampages―all part of a tireless effort that he and other Klansmen made to restore white power when it was threatened by the emancipation of four million enslaved African Americans. To offer a non-white view of the Ku-klux, Ball seeks out descendants of African Americans who were once victimized by “our Klansman” and his comrades, and shares their stories.

For whites, to have a Klansman in the family tree is no rare thing: Demographic estimates suggest that fifty percent of whites in the United States have at least one ancestor who belonged to the Ku Klux Klan at some point in its history. That is, one-half of white Americans could write a Klan family memoir, if they wished.

In an era when racist ideology and violence are again loose in the public square, Life of a Klansman offers a personal origin story of white supremacy. Ball’s family memoir traces the vines that have grown from militant roots in the Old South into the bitter fruit of the present, when whiteness is again a cause that can veer into hate and domestic terror.

Note that the book also deals with the blacks who were victimized by Lecorgne. In the NYT review below, Walter Isaacson, a well known writer and editor who’s a native of New Orleans, also praises the book (with one small cavil):

Ball had already written, in 1998, a deeply reported National Book Award-winning history, “Slaves in the Family,” for which he tracked down descendants of those who had once been enslaved by his South Carolina ancestors on his father’s side. In his new book, “Life of a Klansman,” he follows a similar course, taking the reader along with him on a journey of discovery as he teases out facts, engages in speculation and shares his emotions about the sad saga of Constant Lecorgne, an unsuccessful carpenter and embittered racist who was a great-great-grandfather on his mother’s side.

The result is a haunting tapestry of interwoven stories that inform us not just about our past but about the resentment-bred demons that are all too present in our society today. “This is a family story,” he writes. “Yet it is not a family story wrapped in sugar, the way some people like to serve them.” The family is not just his, it’s our nation’s.

. . . [Constant] Lecorgne [the author’s distant relative] was a minor player in this movement. But for that reason his tale is valuable, both for understanding his times and for understanding our own; he allows us a glimpse of who becomes one of the mass of followers of racist movements, and why.

. . . The interconnected strands of race and history give Ball’s entrancing stories a Faulknerian resonance. In Ball’s retelling of his family saga, the sins and stains of the past are still very much with us, not something we can dismiss by blaming them on misguided ancestors who died long ago. “It is not a distortion to say that Constant’s rampage 150 years ago helps, in some impossible-to-measure way, to clear space for the authority and comfort of whites living now — not just for me and for his 50 or 60 descendants, but for whites in general,” Ball writes. “I am an heir to Constant’s acts of terror. I do not deny it, and the bitter truth makes me sick at the stomach.”

As the last bit suggests, author Ball sees the story as a historical tale in which the Klan and other racists acted as “factories of White supremacy”. The student newspaper, the The Tulane Hullabaloo, reports the author’s take in an interview:

The book narrates his family history of racism and white supremacy with a focus on Ball’s grandfather, New Orleanian Polycarp Constant Lecorgne. Ball compiles stories from Civil War-era New Orleans and Lecorgne’s involvement in militant violence against Black communities. Geographer Lydia Pelot-Hobbs, who specializes in Black geographies and racial capitalism, among other subjects, was also slated to join in the discussion.

Ball said that the story is about white people feeling a loss of status during the Civil Rights Movement and how that “became the tinder for the violence that permeated this man’s life” in an interview with nola.com. His reckoning with his family’s Ku Klux Klan and White League involvement involved a critical look at New Orleans’ past of white supremacy. Ball writes a familial account from the oppressor’s perspective of systemic racism being tied directly together with United States history and national identity.

“New Orleans is a glorious city,” Ball said according to the article. “But it is also a place where some of the factories of White supremacy were housed and where the thing itself was perfected. Less well known is its reputation as a place where whiteness was developed into a refined substance that could be reinforced by violence.”

Indeed, it sounds as this is the very book that social-justice people, and liberals like me, would like to read, and also would want to attend a virtual discussion of the book. Such an event was, indeed, scheduled by Tulane University in New Orleans for August 6.  But for reasons I can’t completely fathom, black students protested the event vehemently, and it was postponed. The University also apologized for having dared to schedule an antiracist event (figure that one out!).

Here’s a report by the Hullabaloo (click on screenshot):

The newspaper report gives some of the pushback (some of the links below come from the conservative site Campus Reform, where I learned about this incident):

The Tulane School of Liberal Arts announced the event on their Instagram page, where it was met with backlash from many students who saw the event as inappropriate and offensive, noting that SLA had not publicly scheduled similar speaking events centering Black perspectives. Upwards of 500 comments, mostly by students voicing their anger towards the event, were generated under the picture.

Ingeborg Hyde and Amanda Krantz, the vice president for academic affairs of Tulane’s Undergraduate Student Government and the president of the SLA Student Government, respectively, wrote an open letter that called for the event’s cancellation and for a reassessment of which speakers the university sponsor. They assert that the university should seek to uplift “Black voices and amplify the experiences of Black, Indigenous, people of color.” Their letter also noted the list of demands released by the Tulane Black Student Union and urged the Tulane administration to apologize to Black students, faculty and staff.

. . .The BSU [Black Student Union] was among many organizations on campus that disapproved of the event.

“We did not think the event was appropriate,” President of BSU Raven Ancar, said. “Tulane needs to be centering Black voices at this time. There’s a national conversation that’s happening right now and it is shaping the future of race relations in our country. tBSU, through our 2020 Demands, is forcing Tulane to be apart of that conversation in order to dismantle white supremacist culture on campus. Compensating a white person who benefited from systemic racism is truly inappropriate, especially in the climate that we are in as a nation. Tulane SLA made the conscious choice to prioritize white voices by hosting this event, which allows the continuation of this KKK family history to be profitable, and that is very problematic.”

What this means is that any white person who writes about the rise of white supremacy, even in as disapproving and horrifying a way as Ball, is inappropriate as a speaker, because he was being “compensated” for his appearance and somehow that promotes the cause of white supremacy. (Does that mean that Robin DiAngelo would be inappropriate as a speaker because she profits from her anti-racist book White Fragility?) But in fact Ball is explaining the rise of “systematic racism”, and in a way that only a white person could who discovered a Klansman in his ancestry, so these objections appear ludicrous.

Here’s the Instagram link to the Tulane Student Government’s objection to the talk: 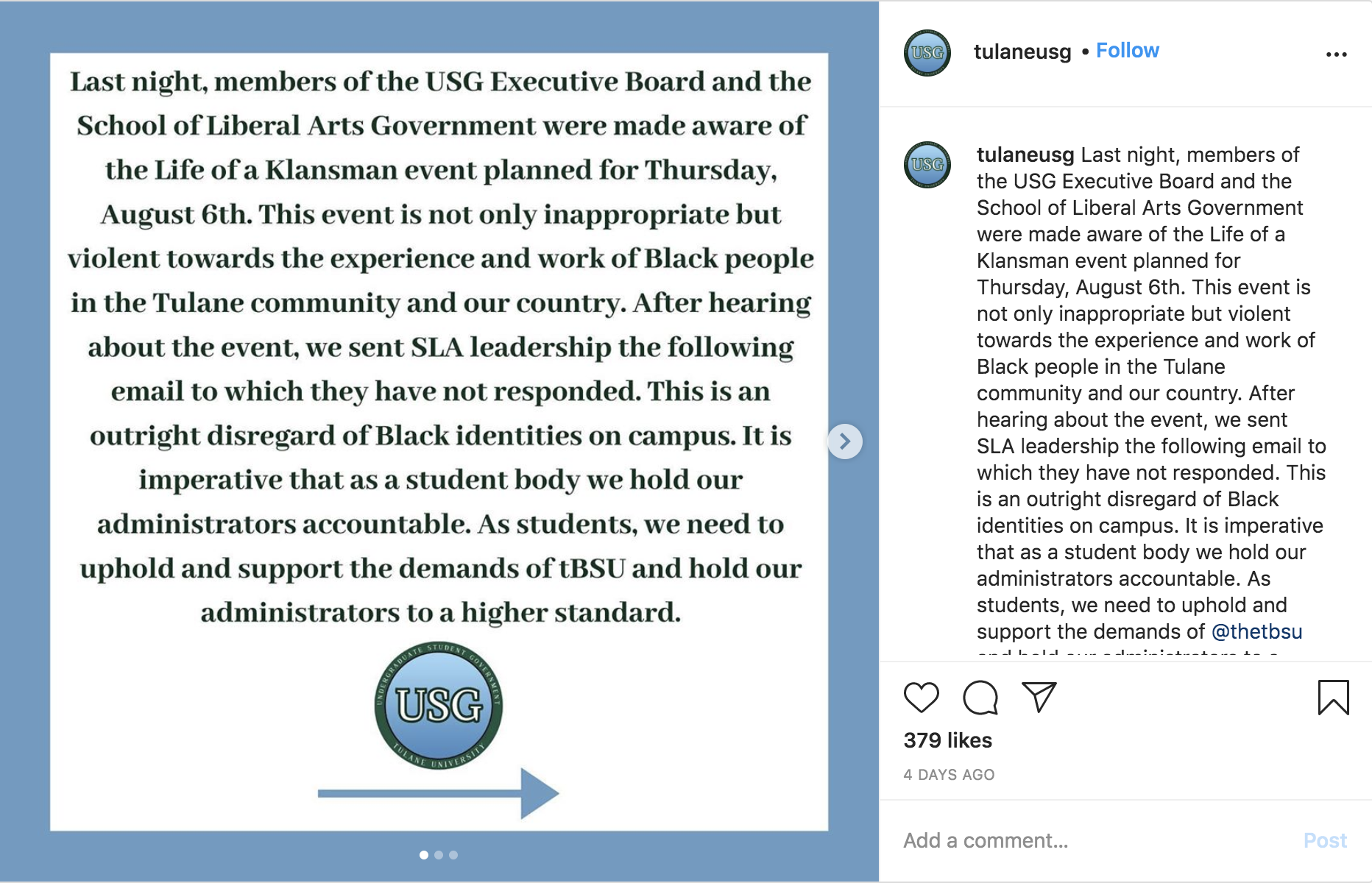 You can guess what happened. The University caved, postponing the event and not rescheduling it. And they apologized! I suspect that Ball’s discussion is dead, an ex-discussion that sings in the Choir Invisible.

Here’s the announcement from Tulane of the postponement, and note that the required apology is tendered. 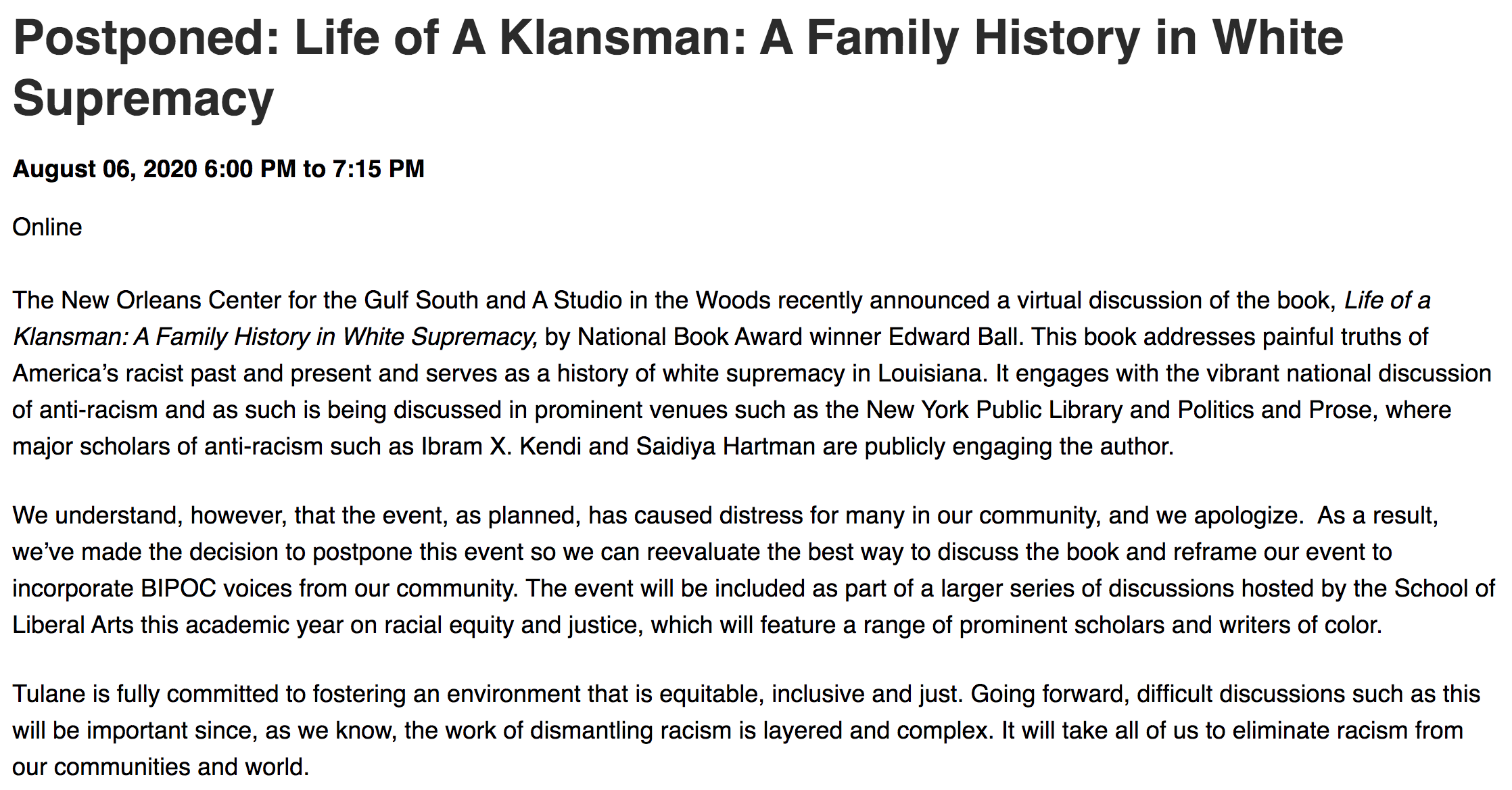 Let us be clear: Life of a Klansman is an anti-racist book, one that deals with and decries the white supremacy of the South after the Civil War.  A black person could not even have written it, for it deals with how a white man reacted when he found the Klan insinuated like Adam’s serpent in his family tree. In this way it is the literary equivalent of (though apparently not as distorted as) the NYT’s 1619 Project, which aims to show how racism arose and became a prominent pattern in the fabric of American history. To object to a book discussion because the author is profiting from his talk (I suspect that if there was any honorarium, it was small), or that somehow white supremacy is being promoted, is simply ridiculous. What we have here are people getting offended about something they should be praising, and confecting reasons to be offended. It is as if, digging through her family history, the relative of a Holocaust survivor, horrified, found a Nazi in her genealogy. Would writing about that somehow advance anti-Semitism or glorify the Nazis? I can’t imagine how.

This never would have happened at the University of Chicago, where the university would simply have responded by saying that Ball was invited and he’s going to speak. And that’s what Tulane should have done. Instead, they truckled to the Offended and even apologized. Shame on them!