As the media release says (links to all materials, including the project’s methods, goals, and the list of seven accepted papers, are here), “The study was cut short when popular Twitter account New Real Peer Review, a platform dedicated to exposing shoddy scholarship, ridiculed one of their published papers. The attention prompted an investigation by the Wall Street Journal (article here) and the group made the decision to go public.”

Areo Magazine has just published the author’s rational and methodology so you don’t have to go to the Google Drive link above to see this material.

The best introduction to the project is the Wall Street Journal article, “Fake news comes to academia“, as well as  the video prepared with the authors’ cooperation, which is below. Do watch it: it’s only 6½ minutes long and is both informative and fun. One of the quotes from Lindsay in the video:

“Since approximately June of 2017, I along with two other concerned academics, Peter Boghossian and Helen Pluckrose, have been writing intentionally broken academic papers and submitting them to highly respected journals in fields that studied race, gender, sexuality and similar topics. We did this to expose a political corruption that has taken hold in the university.”

The authors call their papers “grievance studies” because they play into the ethos of much of the humanities, which “puts social grievances ahead of objective truth.” We all know that’s true for many papers, as I’ve written posts about some of them in the past several years. Remember the unbearable whiteness of yoga, yogurt, and pumpkins, and the work on feminist glaciology? That’s only a small sample of the ludicrous papers that, by populating some humanities journals, waste trees and neuronal activity. (I emphasize that there are many good studies in the humanities, but that the fields targeted by the authors have become deeply corrupted by requiring scholars to produce papers with politically approved conclusions.) The “authoritarianism” involved here is the fields’ and journals’ insistence that only a few ideological and political attitudes are acceptable in the work and publications.

But on to the video:

Seven papers have been accepted, but more were submitted; the project was cut short when the press sniffed it out. Journals on feminist studies, queer studies, fat studies, race studies, and so on will now be frantically vetting submitted papers to be sure they aren’t hoaxes. (This is best done not by looking at the content, for satire is indistinguishable from “real” scholarship, but checking on the identity of the authors.)

One paper even recast 3600 words from Hitler’s Mein Kampf as feminist theory, and was accepted by the journal Afflilia: Journal of Women and Social Work (it was rejected by Feminist Studies, but have a look at the reviewer comments on the fact sheet). As the project’s fact sheet notes: 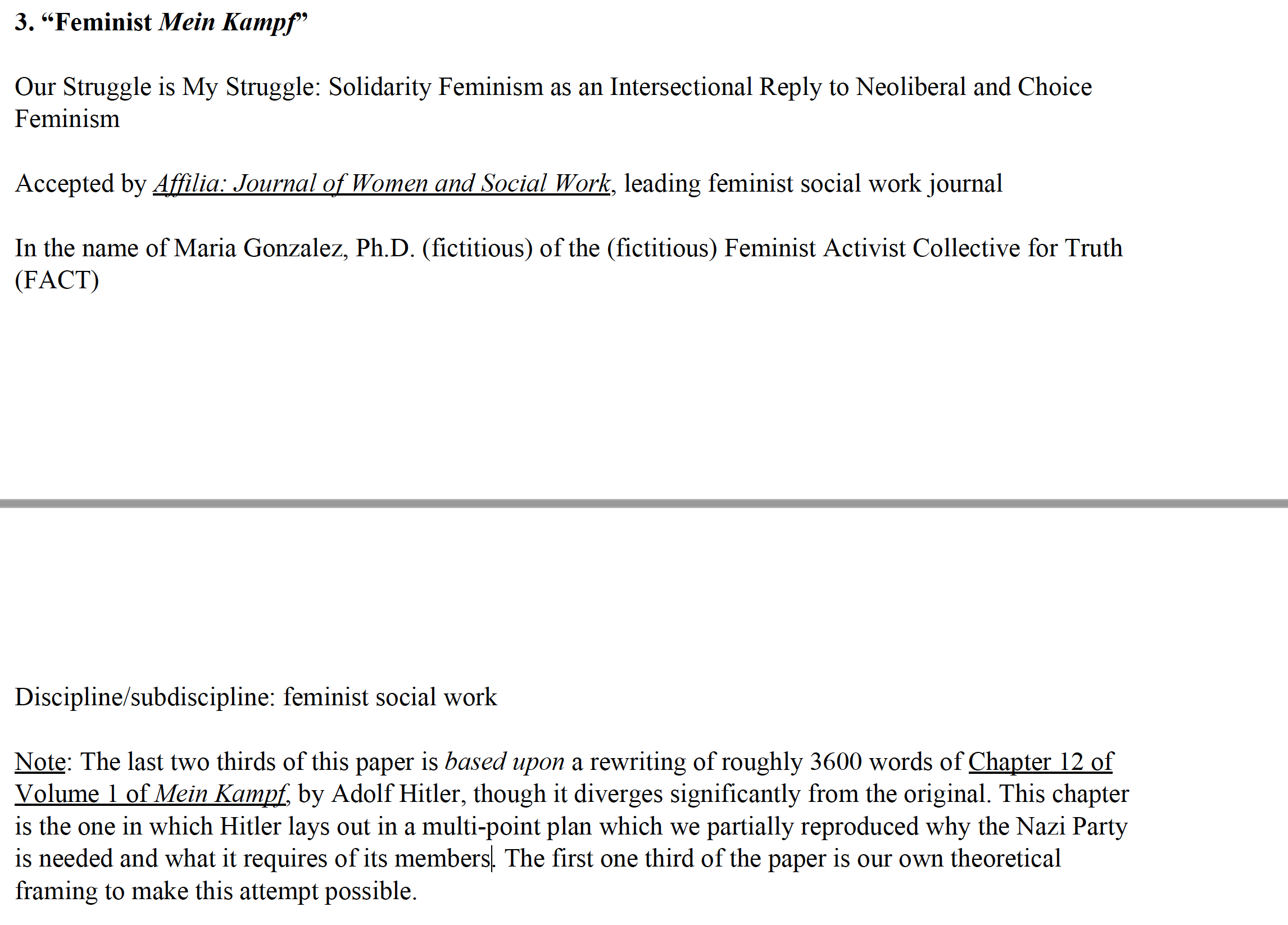 In fact, a while back I came upon one of the authors’ satirical papers in Gender, Place & Culture, assumed it was real, and was going to write a post calling attention to the travesty. It turned out that I, like the journal’s editors, couldn’t distinguish “scholarship” in this journal from complete dreck. Here’s the original paper (click on screenshot to go to the site): 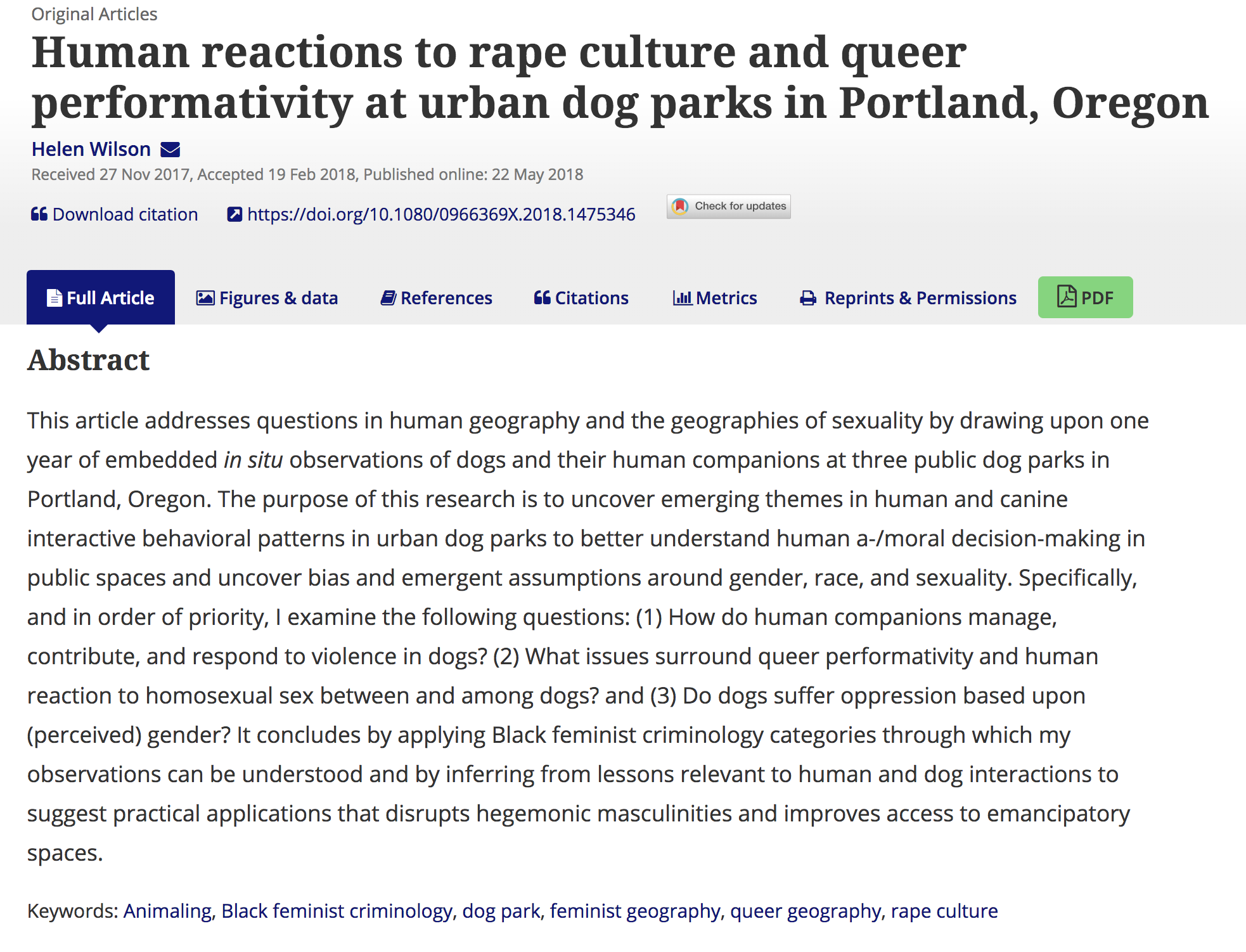 The paper has now been retracted, but on the grounds that the author used a disguised identity, not that the content was garbage. As the editors note:

We, the Editors and Publishers of Gender, Place & Culture, have retracted the following article:

This is due to a breach of the following Publishing Agreement clause, signed by the author during the publication process:

“You warrant that: i. All persons who have a reasonable claim to authorship are named in the article as co-authors including yourself, and you have not fabricated or misappropriated anyone’s identity, including your own.”

Following an investigation into this paper, triggered by the Publisher and Editor shortly after publication, we have undertaken a number of checks to confirm the author’s identity. These checks have shown this to be a hoax paper, submitted under false pretences, and as such we are retracting it from the scholarly record.

Quillette has already solicited five statements from academics about the Grievance Studies project, all of whom find the Project fascinating and strongly criticize the fields for the pollution and ideology revealed by the satirical papers. You can read their reactions by clicking on the screenshot below: 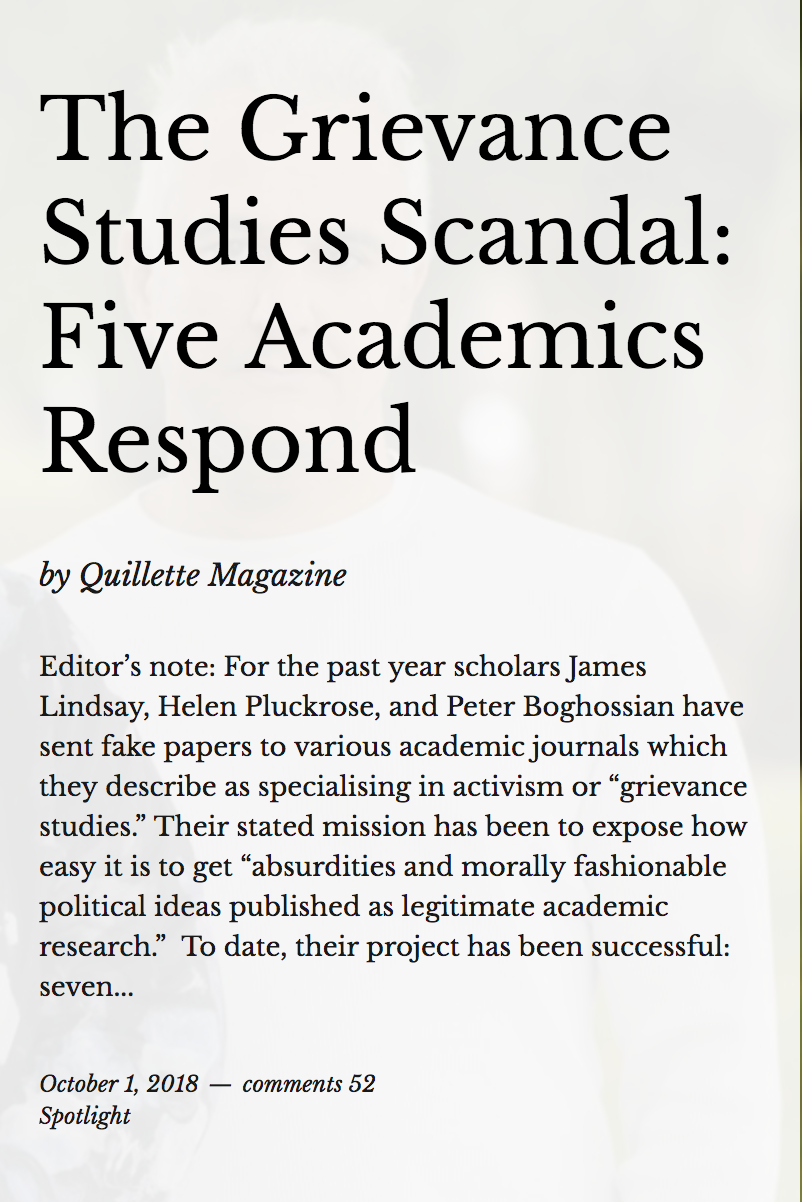 Here’s what one of the five, Nathan Cofnas, in philosophy, had to say about the standards of one “quality” journal:

The flagship feminist philosophy journal, Hypatia, accepted a paper (not yet published online) arguing that social justice advocates should be allowed to make fun of others, but no one should be permitted to make fun of them. The same journal invited resubmission of a paper arguing that “privileged students shouldn’t be allowed to speak in class at all and should just listen and learn in silence,” and that they would benefit from “experiential reparations” that include “sitting on the floor, wearing chains, or intentionally being spoken over.” The reviewers complained that this hoax paper took an overly compassionate stance toward the “privileged” students who would be subjected to this humiliation, and recommended that they be subjected to harsher treatment. Is asking people of a certain race to sit on the floor in chains better than asking them to wear a yellow star? What exactly is this leading to?

We know what will happen now. The journals will retract the papers (but not on grounds of scholarship!), and those defenders of the polluted fields will argue that the journals are not first-rate journals, but predatory ones that will publish anything. That, however, is not the case this time.

Further, those Authoritarian Leftist defenders of the rigor of feminist, queer, fat-studies, and other fields infected by postmodernism will call out Lindsay, Pluckrose, and Boghossian for duplicity. But that’s not the point, just as it wasn’t the point in the Sokal Affair. Yes, one needs to be deceptive in a case like this, but it’s deception of the kind that occurs when government officials test TSA screening methods by putting fake bombs and guns in luggage. It’s a necessary, blind-testing way to expose shoddiness and rot. Yes, we’ll hear a lot of screaming from the humanities and Authoritarian Leftists, but it will be at once obfuscatory and humorous. I’m looking forward to it. (Note: One defense of the journals has already appeared; it’s more or less what I expected, but including the charge that we Leftists should spend our time policing the Trump administration and the military-industrial complex than policing academia. It’s a great example of whataboutery.)

In the end, I don’t think the fields infiltrated by these papers will change much. The students want these kinds of studies, the classes are money-makers for universities, the papers are money-maker for the journals, and, in fact, I suspect that many professors already know that they churn out a lot of junk, but they don’t care. After all, it’s the way to get a secure job and get ahead in academia. But at least the rest of us will know how our tax money is being used, how our students are being propagandized, and how what could be respectable fields of scholarship are being eaten away by the twin termites of postmodern nonsense and the Authoritarian Left.

As the Wall Street Journal notes, there will likely be severe repercussions to all three researchers:

Mr. Boghossian doesn’t have tenure and expects the university will fire or otherwise punish him. Ms. Pluckrose predicts she’ll have a hard time getting accepted to a doctoral program. Mr. Lindsay said he expects to become “an academic pariah,” barred from professorships or publications.

Yet Mr. Lindsay says the project is worth it: “For us, the risk of letting biased research continue to influence education, media, policy and culture is far greater than anything that will happen to us for having done this.”

Kudos to them; they’ve done a good thing. Most of us know how bad the scholarship can be in these fields, but they have cast a big spotlight on it.