Bruce Lyon from UCSC has returned with the latest photos and details from his research trip to Argentina. His notes are indented:

Here is another batch of photos from my expedition to Argentina last December to begin a study of the horned coot (Fulica cornuta) in the high Andes (first post here). We started at a lower elevation site (3500 meters) and struck out on the coots but saw lots of flamingos. We then headed up to even higher elevation sites (4500 m; roughly 15,000 feet) near the Bolivian border to check several lakes, including Laguna Vilama and Pululos. We found coots and lots of other things as well. Here is the first batch of photos from the high-elevation site.

Below: We drove through a variety of interesting landscapes, including what is locally called painted mountain formations. 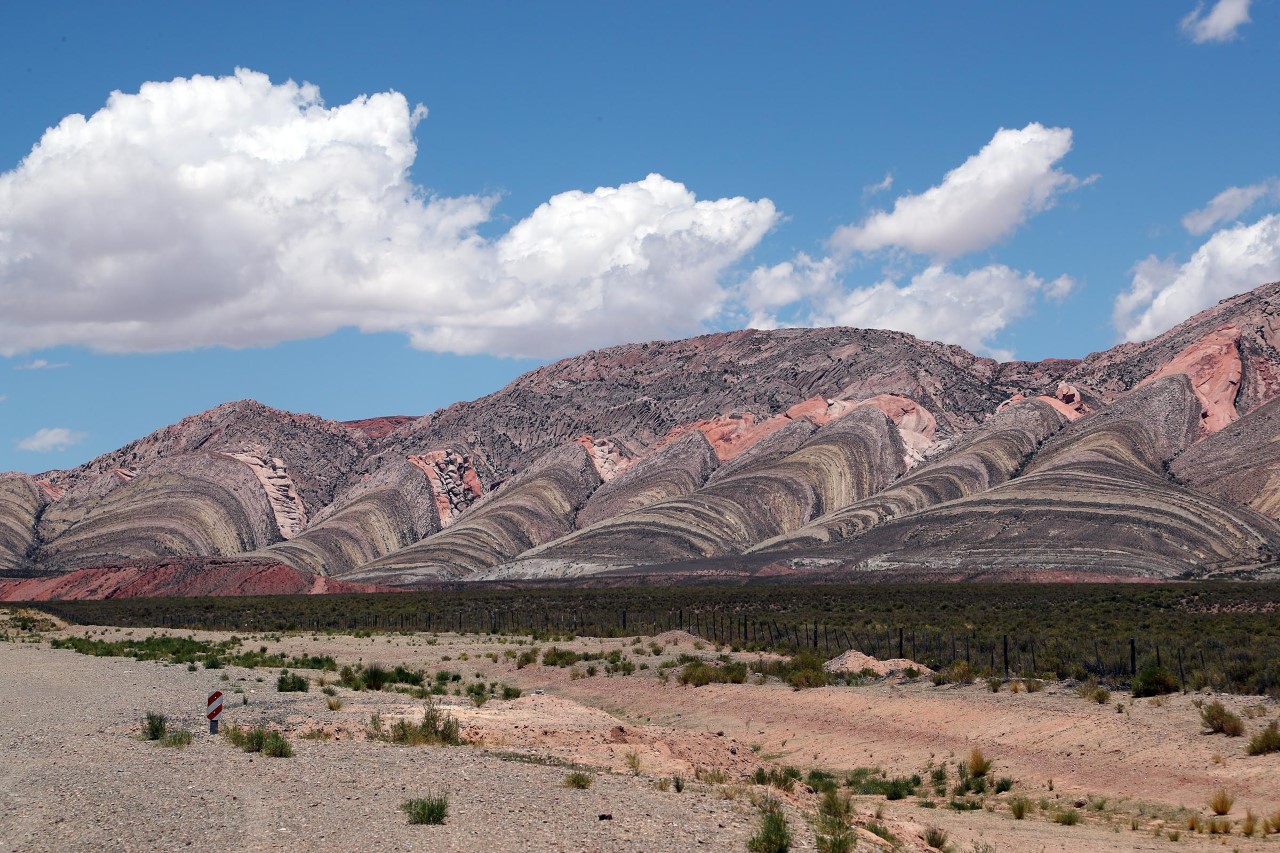 Below: Once we got to really high elevations we started seeing the charismatic plant Yareta (Azorella compacta) in the carrot family (Apiaceae). It looks like an alien being and adds an otherworldly atmosphere to the austere landscape. The plant creates a compact dense mat that apparently reduces water and heat loss. Some individual plants are estimated to be over 3000 years old. 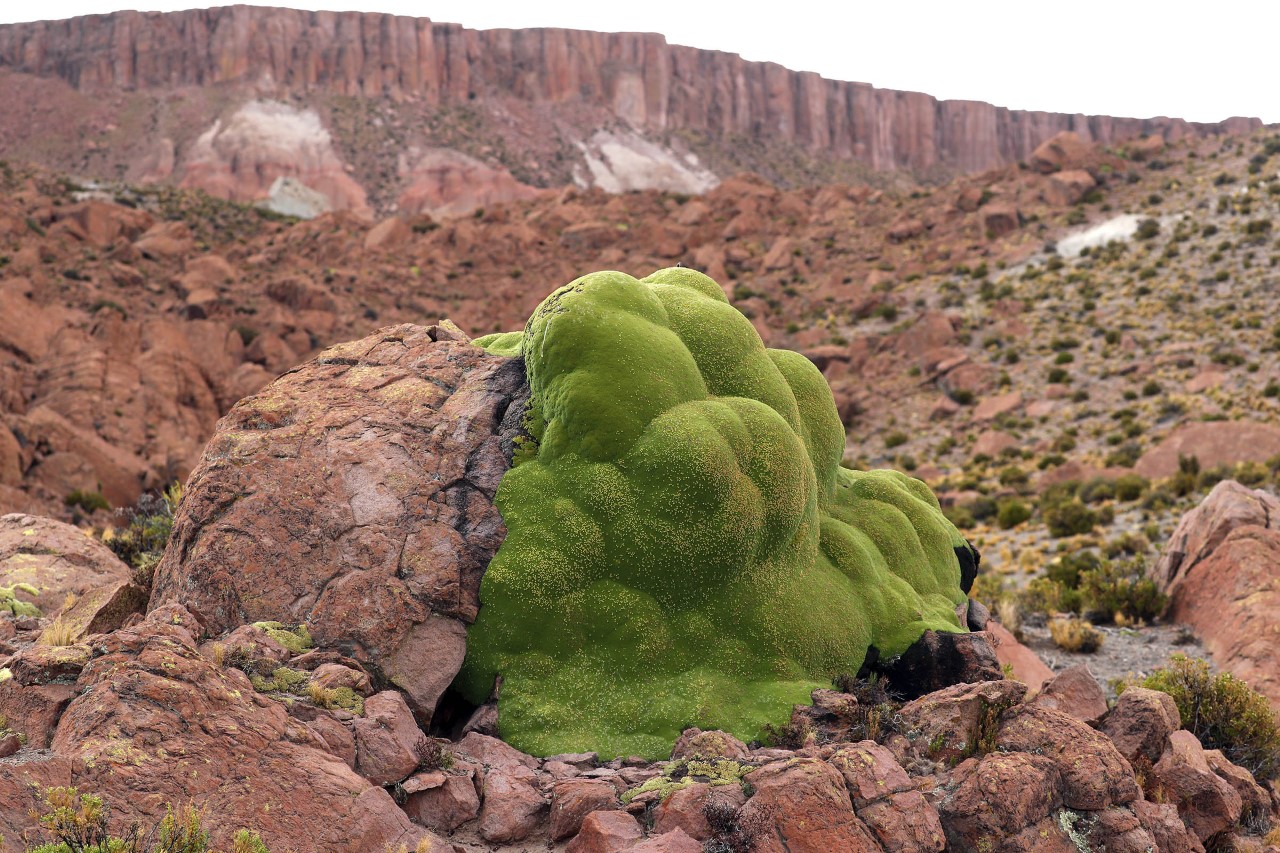 Below: Another Yareta plant. 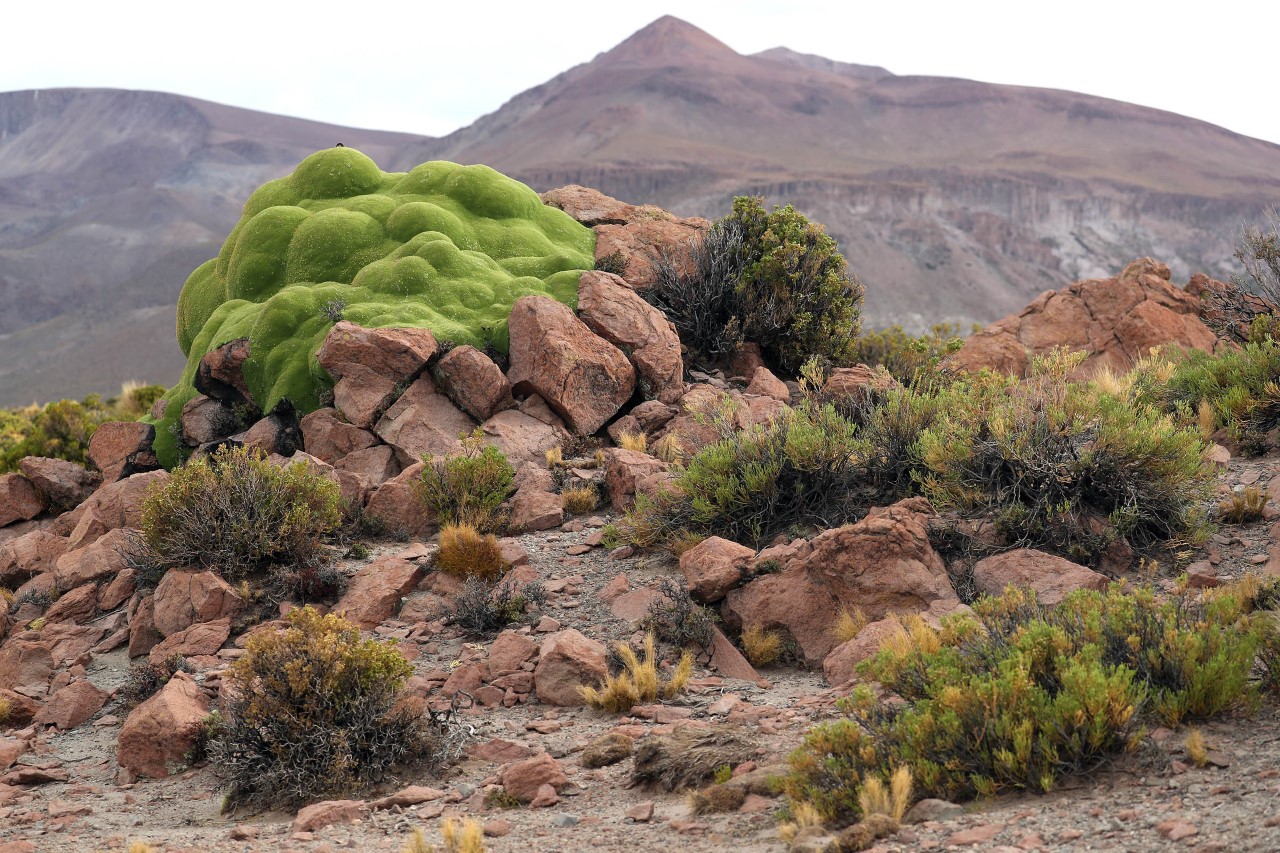 Below:  A lovely cat mural on the wall of the last small town we passed through (Lagunilla del Farallon) en route to our final destination ‘way beyond the middle of nowhere’, as my Argentinian colleagues referred to the study area. 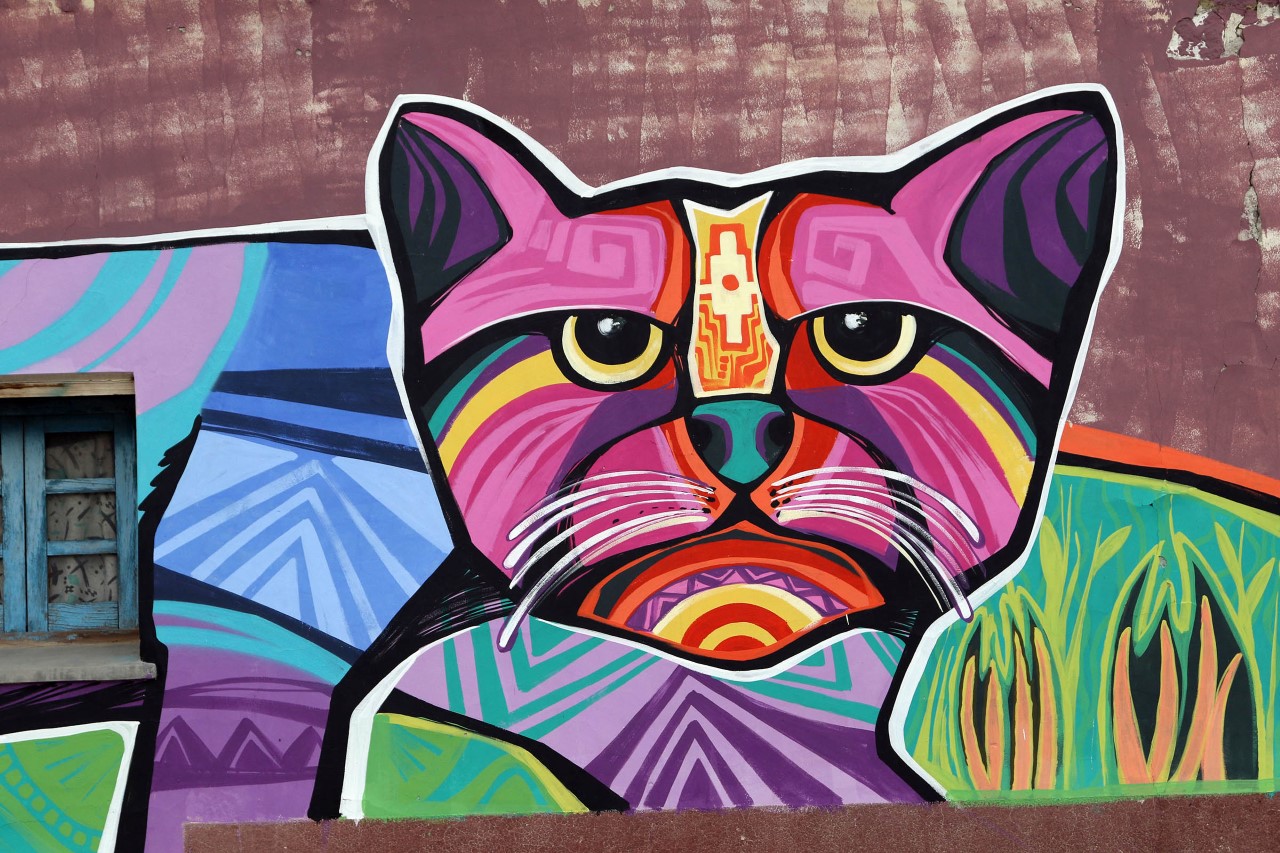 Below: A view of one of the lakes that had nesting horned coots. We found about 20 pairs on this lake and roughly 20 more on each of three other lakes.

Below: A horned coot with the weird ‘horn’ over the beak from which the name derives. The horn is a three-pronged wattle with a longer central wattle and two shorter outer wattles. The function of the horn is not known but based on my natural history insights from two decades of studying American coots (Fulica americana) I am willing to bet a bottle of single malt whisky that these horns are social signals used in social competition. Many coot species are territorial and fight a ton, and they use social signals on the beak like frontal shields to signal fighting ability and influence the outcome of competitive interactions. Note that I reserve whiskey bets for important bets where I am reasonably sure I will win. Beer bets are for things that don’t matter (basically for chumps). 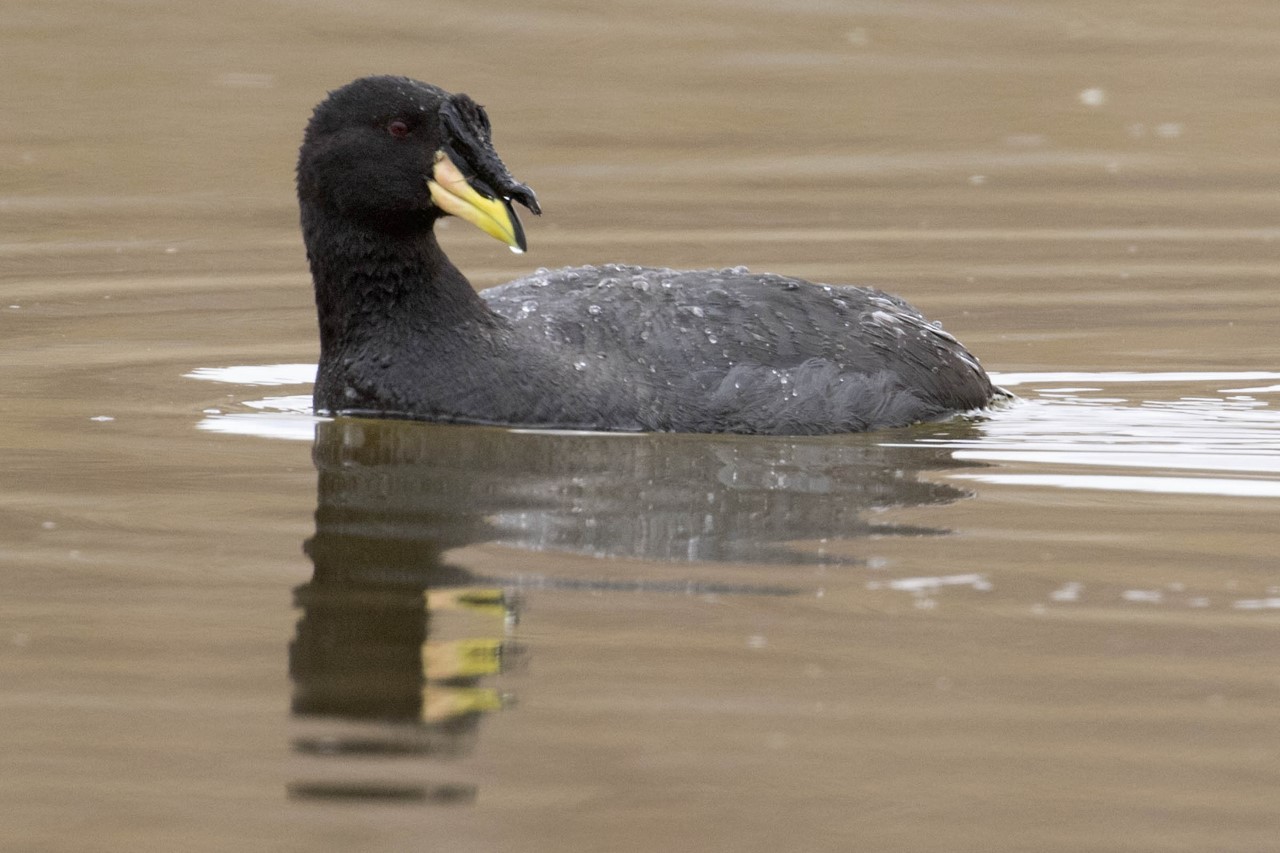 Below: A pair of horned coots on their territory. Horned coots are fairly rare (mostly due to a restricted distribution) and the IUCN red list has them as ‘near threatened’. Very little is known about these birds, including basic aspects of their breeding biology. We are particularly interested in seeing which aspects of their breeding biology is similar to American coots, and which aspects differ, and why.

Horned coots are considered ‘congregatory’ breeders, which means that the species sometimes gathers in globally significant numbers at one location. They sometimes breed in large numbers —1000 nests were reported on one modest-sized lake we visited. The birds can nest at very high densities, so before we started the study we wondered if they would even be territorial. We did observe several pairs fighting at territory borders so they are territorial around their nests. An important question we now need to resolve is whether they remain on their territories for the whole-chick rearing period, for that is when the food crunch typically kicks in with coots. In American coots, for example, chicks remain on the parental territory until full grown so that all food for the kids must come from the territory. I found that territory size was the best predictor of the number of chicks a pair of American coots produced in a breeding season. We shall see how things work with horned coots. 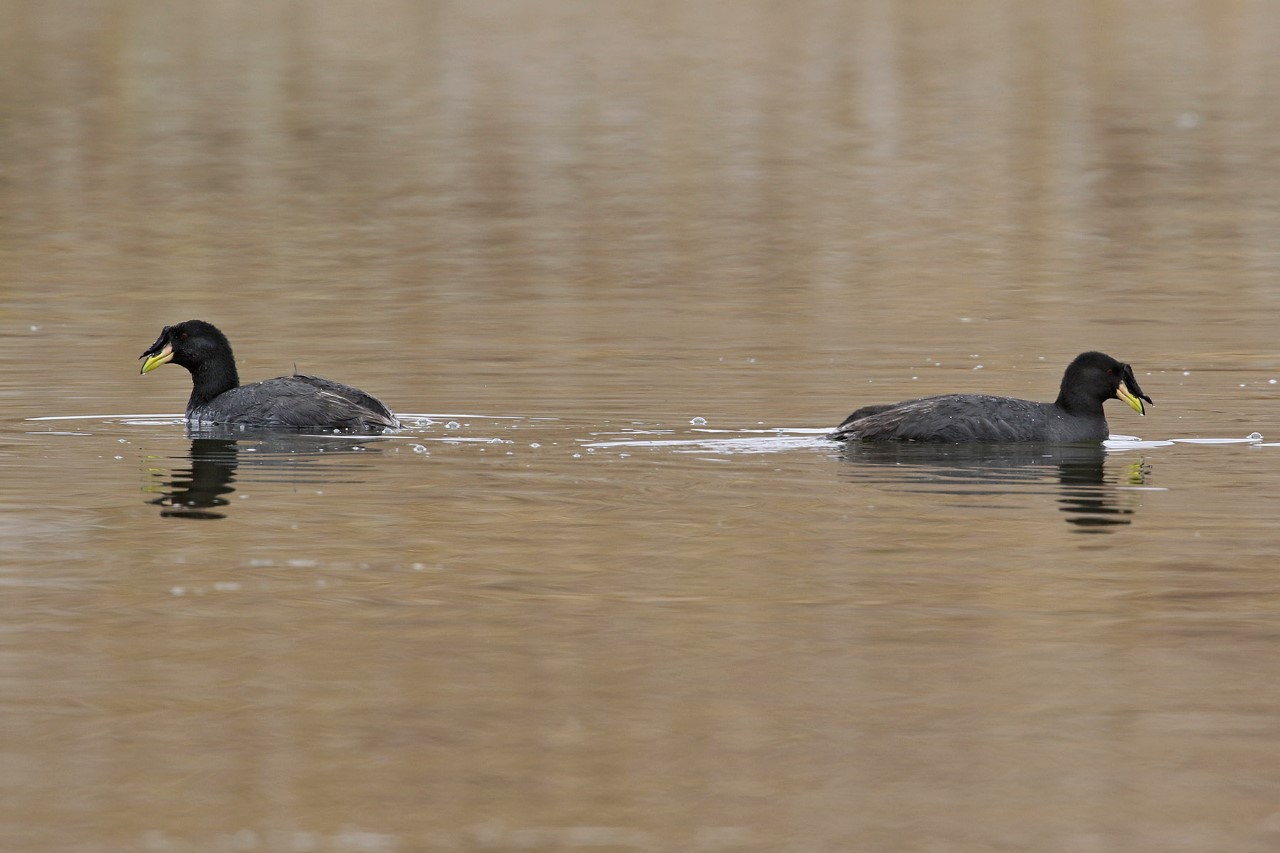 Below: Despite defending nesting territories, the nests can be ridiculously close to each other. The photo shows four nests in a row only about 10 meters apart (30 feet). 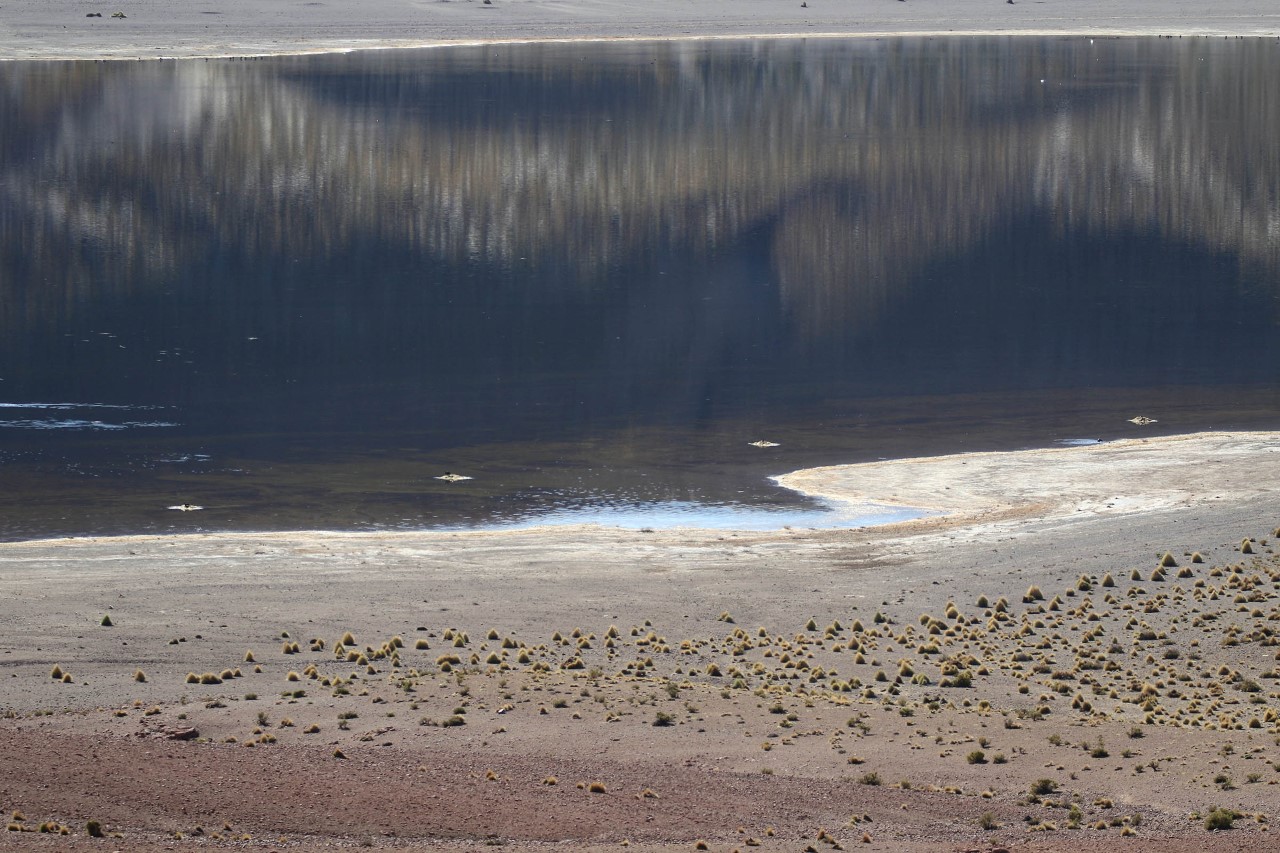 Below: Horned coots may be just as pugnacious (and obnoxious) as their American cousins—here a coot chases a crested duck (Lophonetta specularioides) out of its territory. 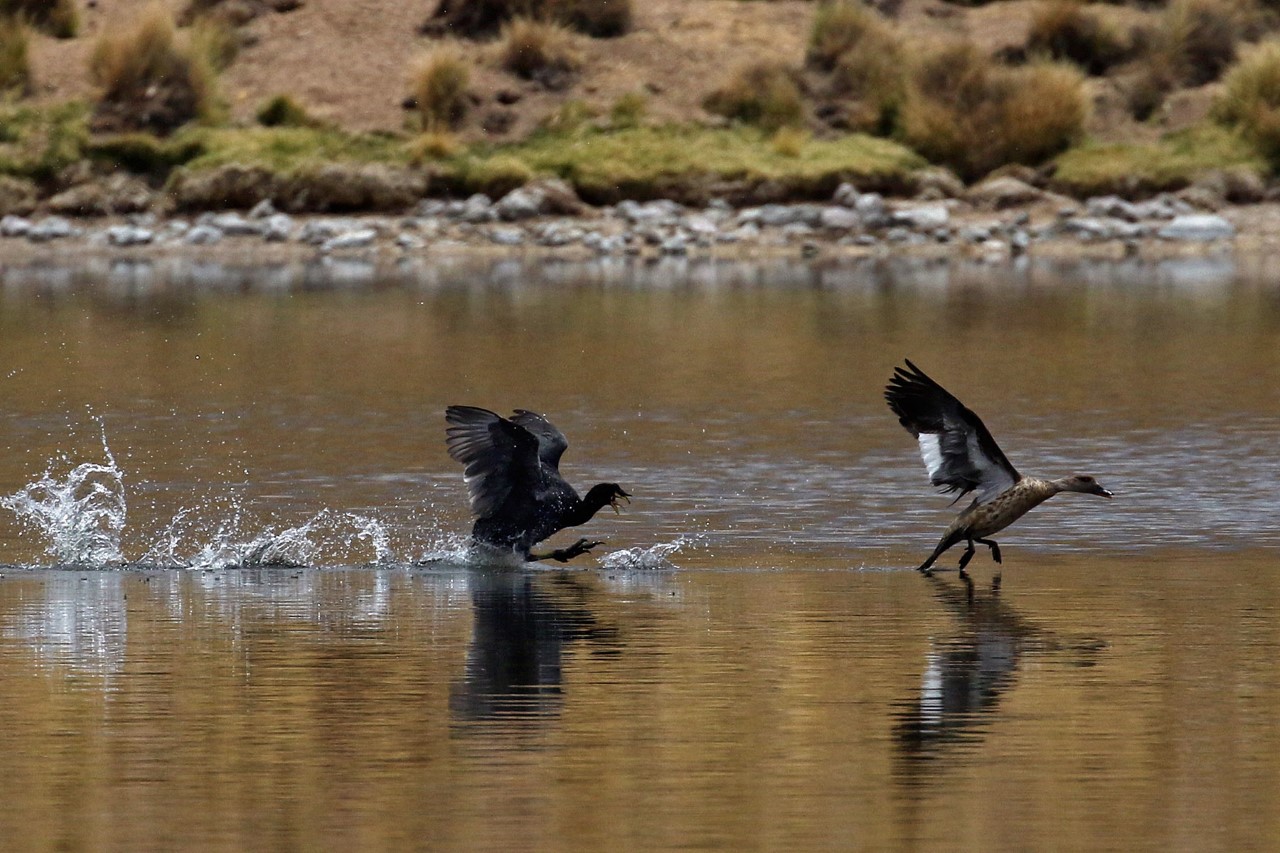 Below: A pair of coots at their nest. In many bird studies, finding nests is difficult and time consuming. Horned coots are easy—the nests are large and there is no emergent vegetation on the lakes to conceal them. Finding nests will be easy, getting enough oxygen while working will be the tough part. Of the 80 nests we found, most had eggs or were under construction and only two pairs had chicks. 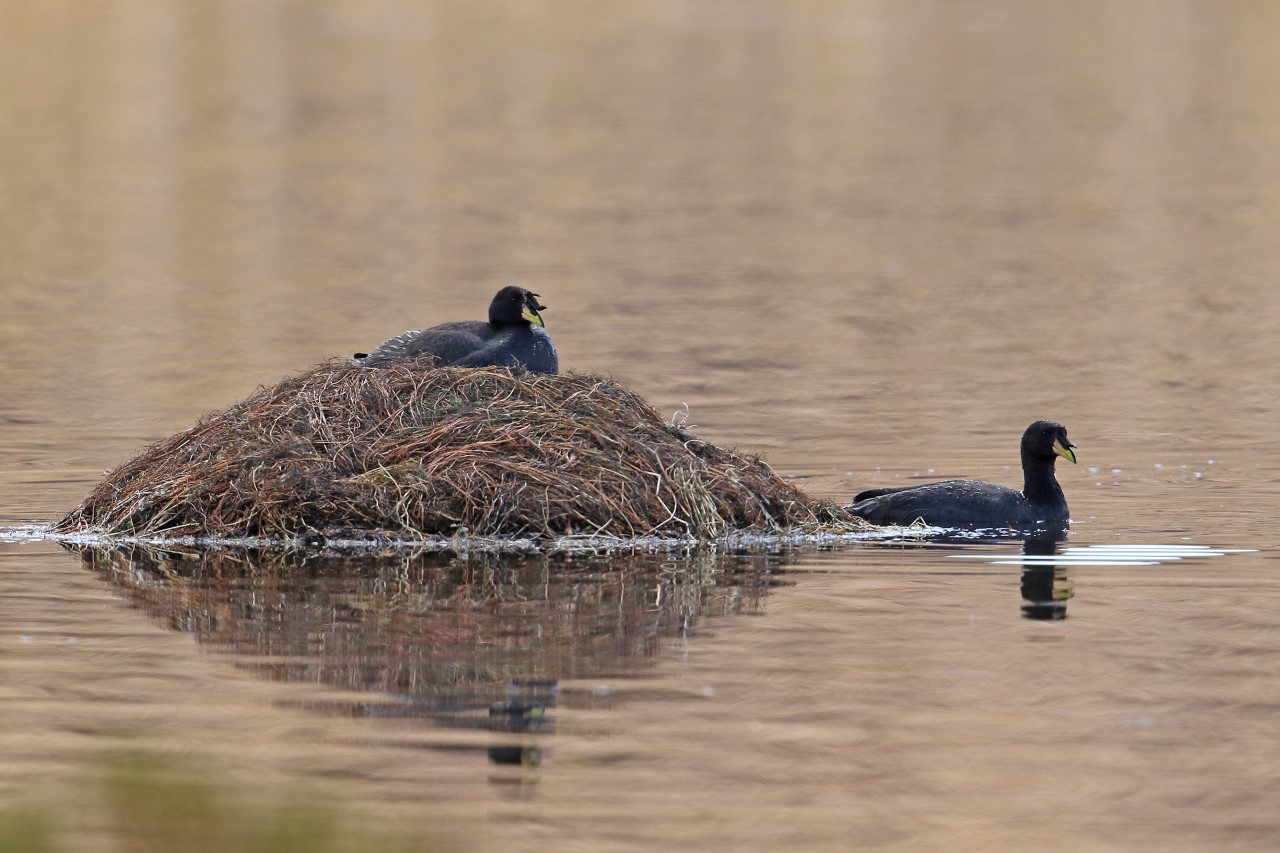 My colleague Alejandro Pietrek was thrilled to check his first coot nest. Checking coot nests is not rocket science—we collect basic information like number of eggs, and we measure each egg and give it a unique number with a Sharpie pen. In a future field season we will need to do a detailed study where nests are checked daily to see if horned coots lay eggs in each other’s nests. My previous work revealed that this conspecific brood parasitism is frequent in American coots, covered in earlier posts here and here. Checking nests daily detects cases of brood parasitism because female birds cannot lay more than one egg in 24 hours so two or more new eggs since yesterday means at least two females are laying eggs in same nest. 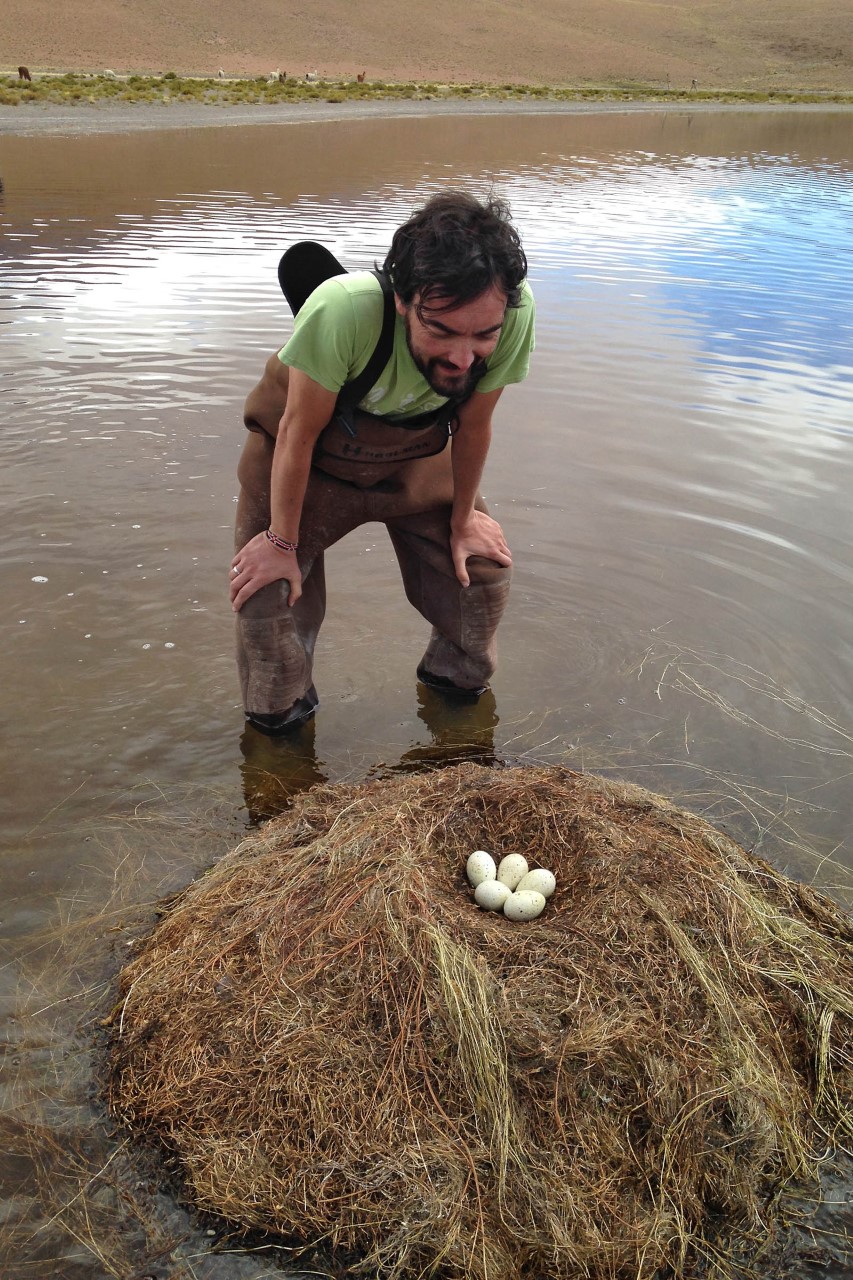 A clutch of five eggs. All the nests we found that were in the incubation stage had five eggs. This consistent clutch size differs dramatically from American coots, where clutch sizes range from 3 to 15 eggs. Based both on the very consistent clutch sizes and the fact that eggs in nests looked like they had been laid by the same female (based on similar marking patterns) we suspect that brood parasitism is likely to be uncommon in horned coots. 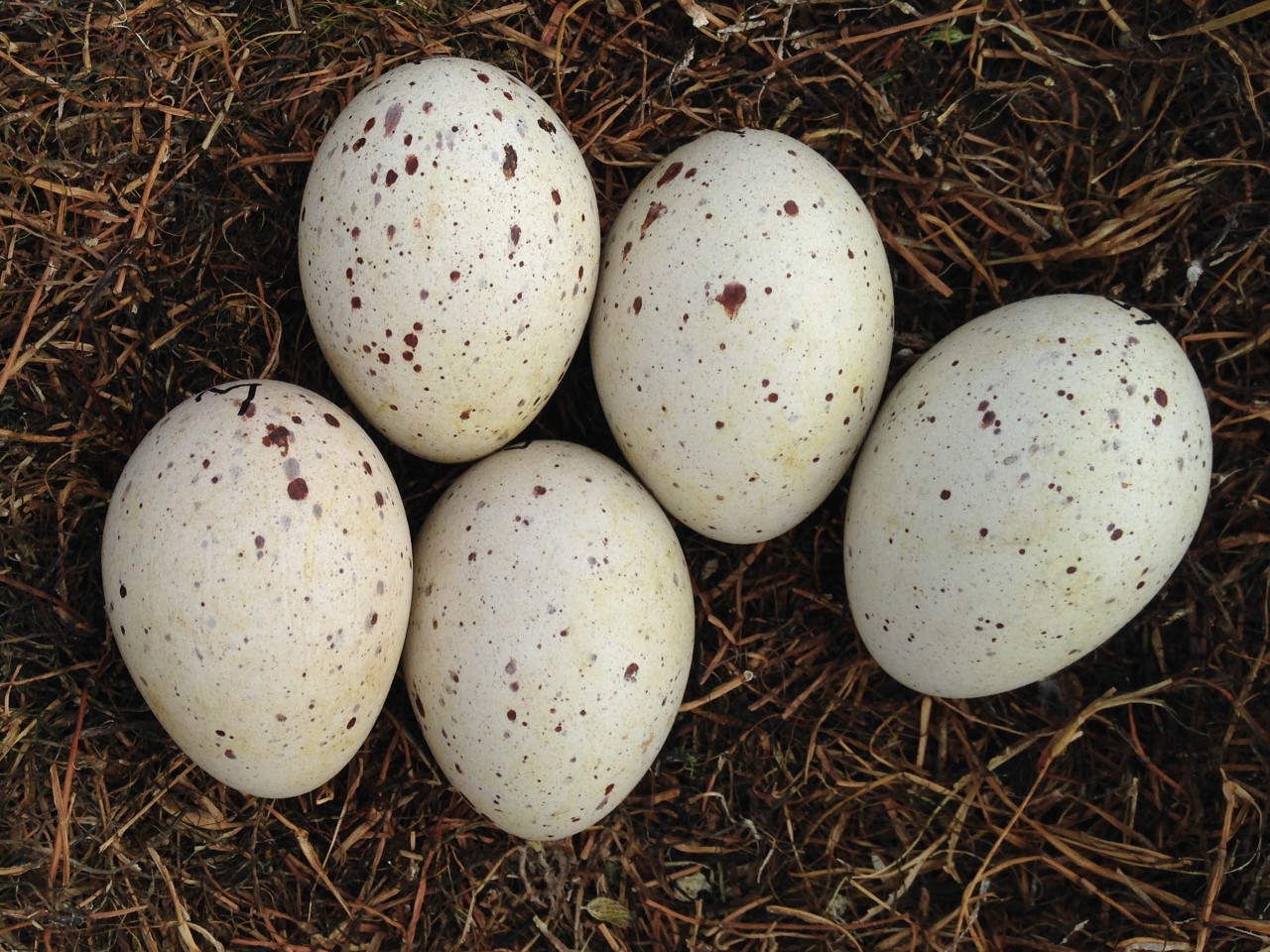 Below: Many of the coot pairs were building nests. They were all using the same abundant submergent plant species (not yet identified by us). The birds were also eating this same plant so the plant seems important for both food and building nests. 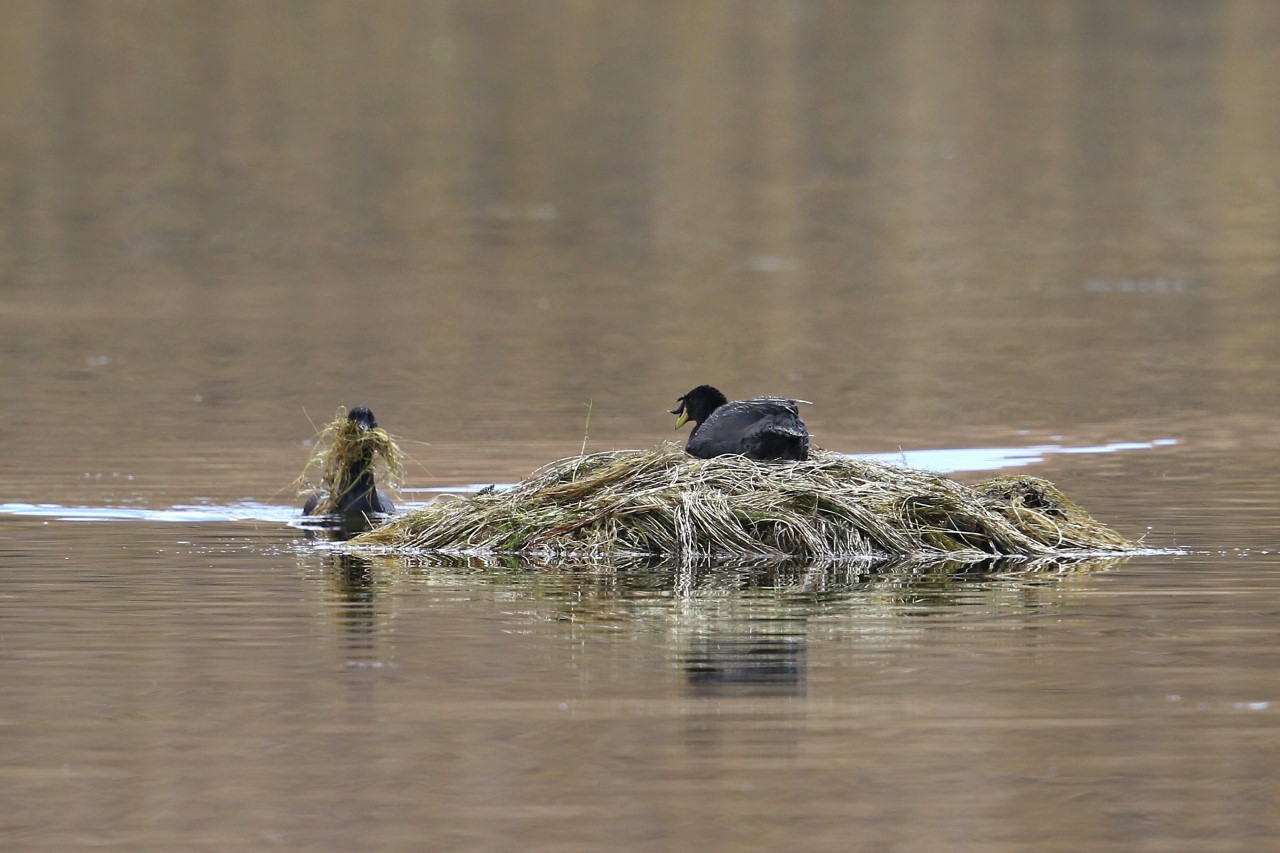 Below: The literature points out that horned coots build a mound of pebbles under the water that serves as the base of the nest and vegetation is then added on top of the mound of pebbles. Wikipedia suggests that in some cases over a ton of pebbles is amassed at a single nest. We watched some birds building nests where there was no apparent pebble base (confirmed when the wind promptly blew the floating vegetation away into the neighboring territory). Clearly, though, some birds in this population do use pebbles — below are old nest pebble mounds, now high and dry, from the past when this lake had more water and covered a larger area. 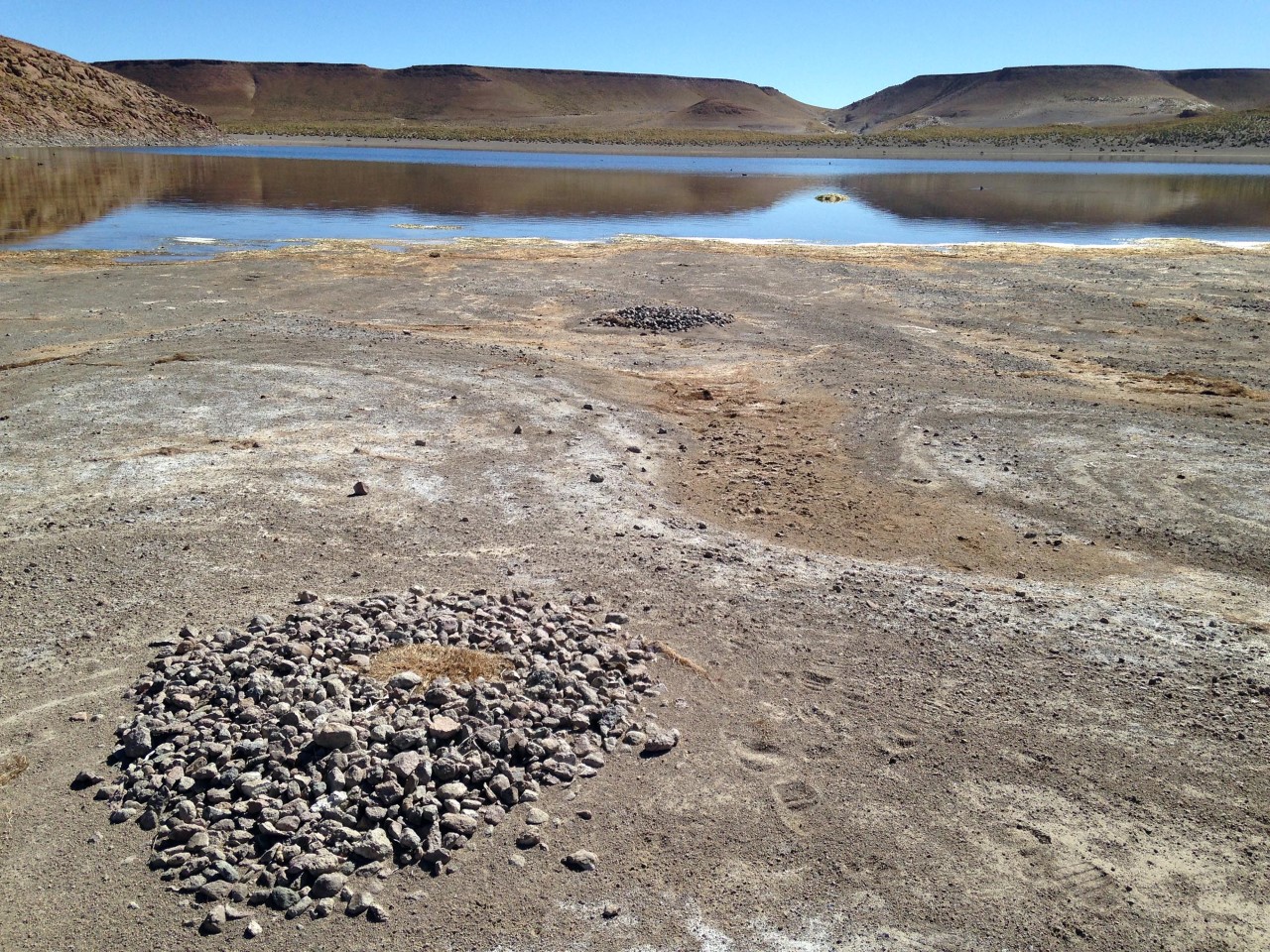 Below: This lake also had lots of llamas along the shore. The locals mark their llamas with decorative tags on the ears and chests so that they can distinguish their animals from those of other herders. There are no fences so it seems llamas from different herders can hang out together. 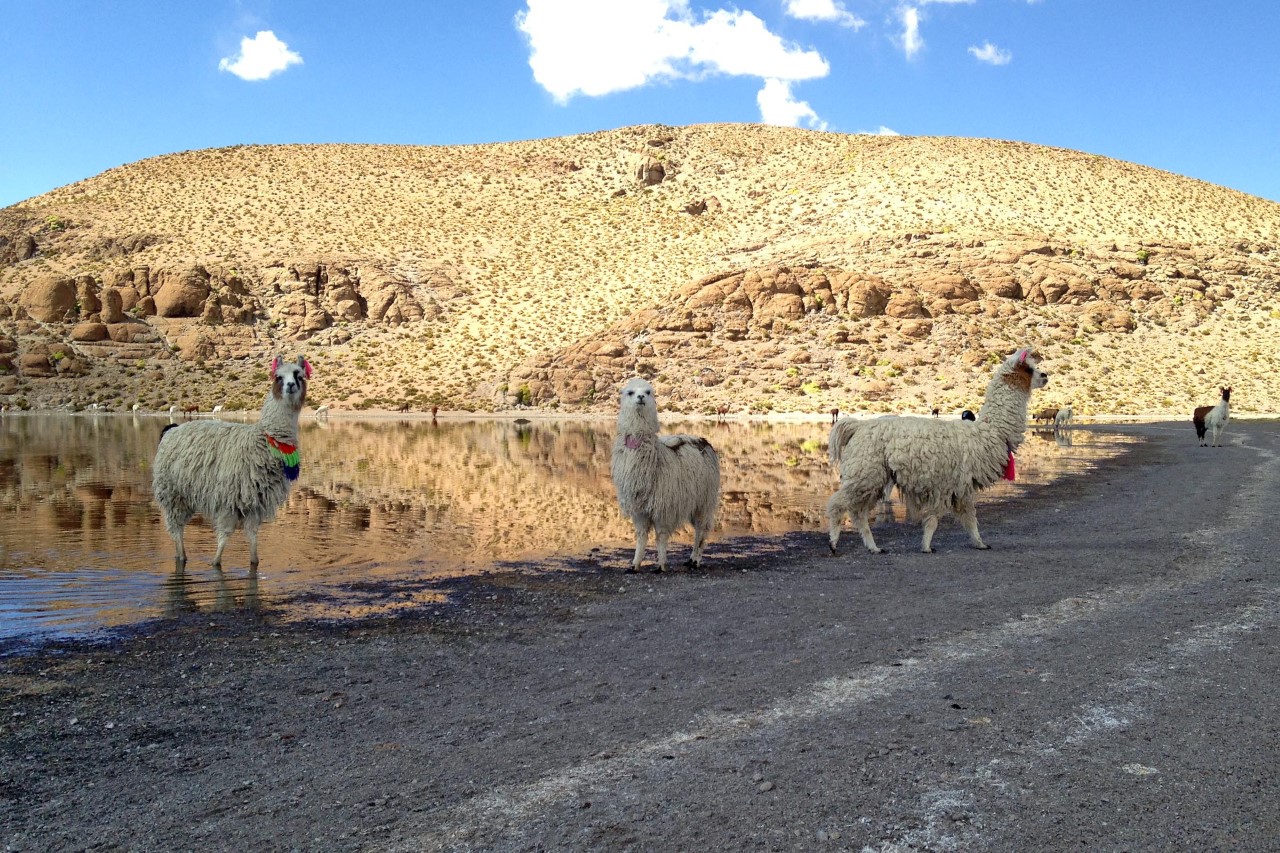 Below: We initially wondered why the llamas were milling around the shoreline but we then saw that they were eating the same plant that the coots were eating and using for nests. Llamas and coots competing for the same resource: who knew? 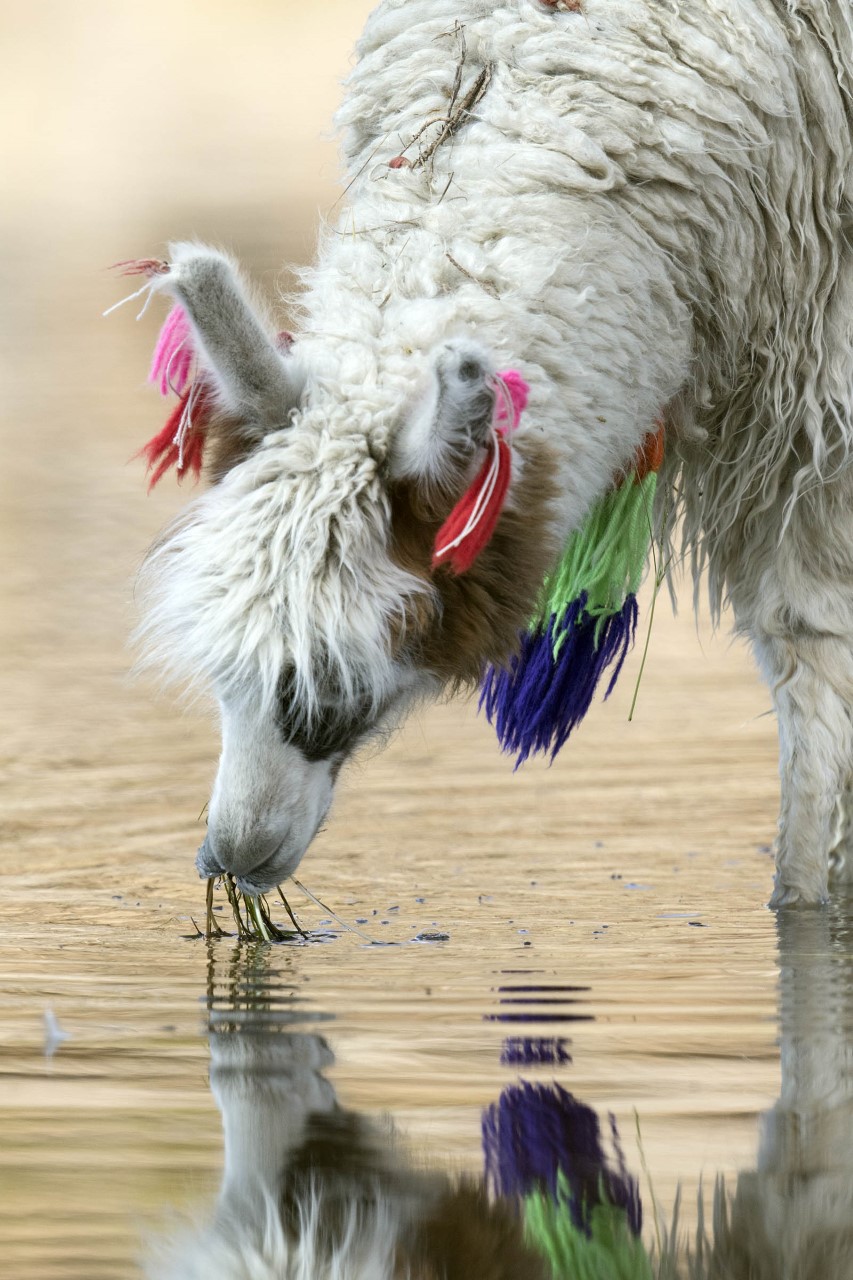 One added bonus is that Andean mountain cats (Leopardus jacobita) occur there . The flamingo guy actually saw one during one of his visits.

Everybody loves the big cats but I am kind of partial to the little guys. Here is a photo of one I found online. What a gorgeous creature! Very little is known about them.

JAC: I thought this was a photo of a stuffed toy cat, but other photos of Andean mountain cats show that they really look like this . 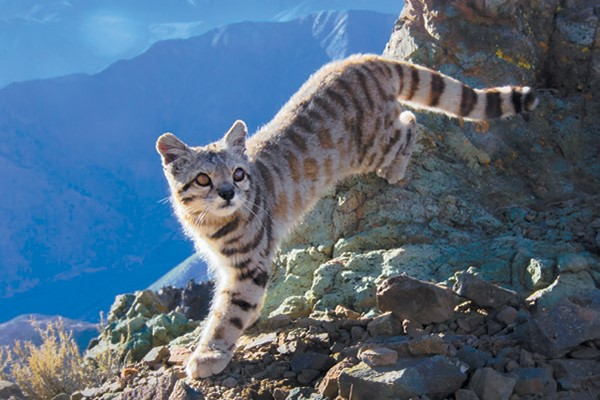