We celebrate the return to this site of evolutionary biologist and ornithologist Bruce Lyon from UC Santa Cruz, who has been busy in the field. Today he tells us about his field work in Argentina, and also about flamingos. Bruce’s emails are also science posts, so read and learn. His narrative is indented:

I spent two weeks in December in the high Andes of Argentina beginning a new project on the horned coot, a species I have wanted to study for 30 years. It large (the size of a small goose), nests in beautiful and very high elevation lakes, and it seems to differ in important ways from the American coots I have studied for so many years. 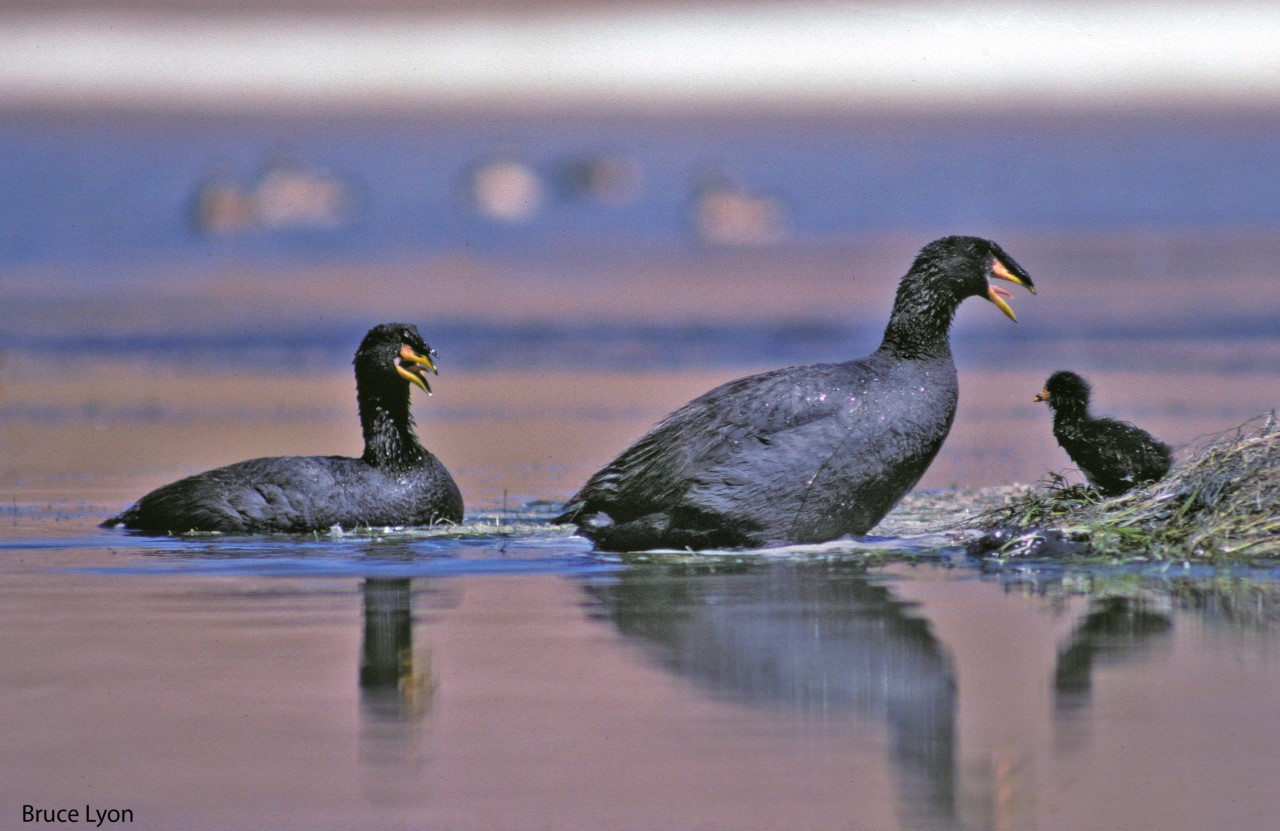 Below: An American coot chick—note the striking difference between the jet black chick of the horned coot shown above. 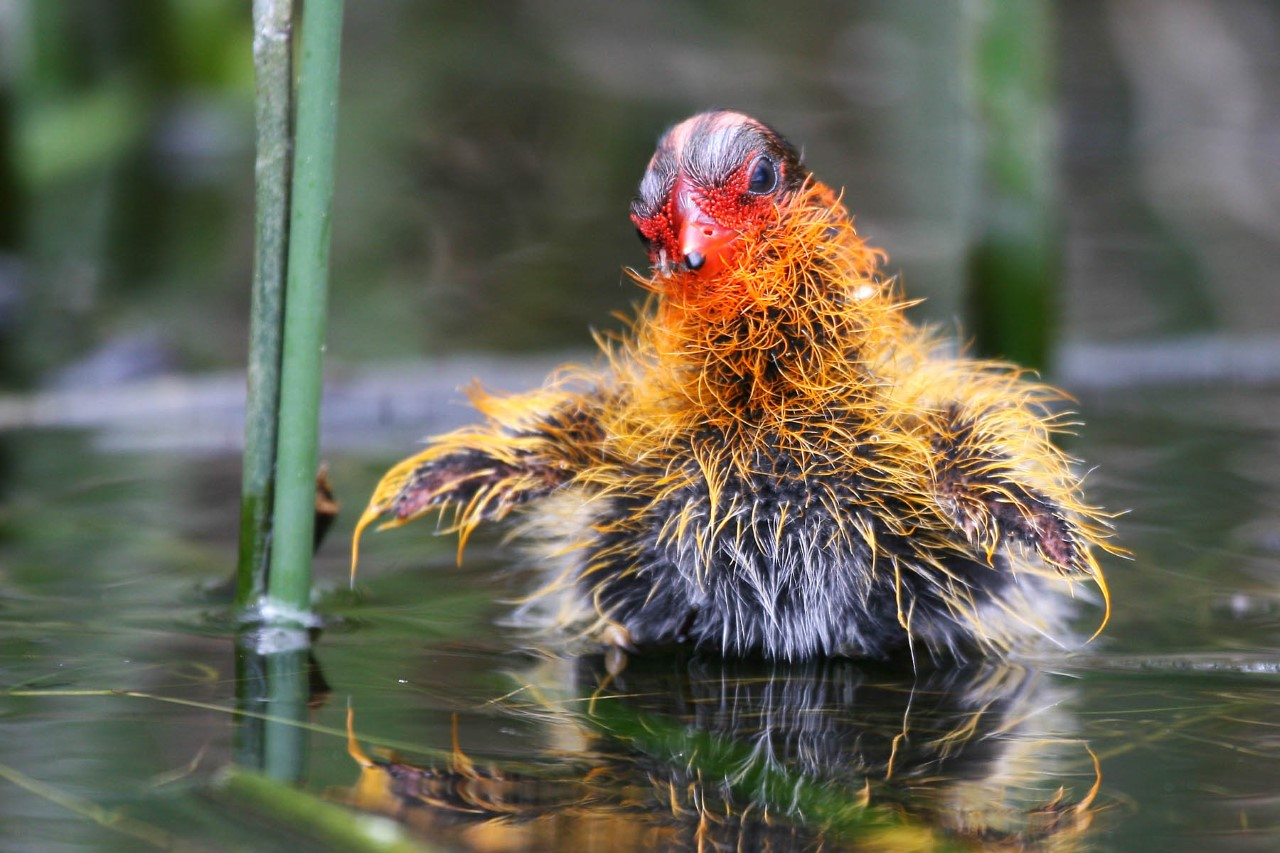 The impetus to finally commit to studying horned coots came when a Argentinian biologist contacted me about some of the methods I use to study American coots — he plans to study horned coots and will use some of the same field methods I have used. After several email exchanges, a collaboration was born and we went on an expedition to a few sites to look for coots and see if a project is feasible.

We visited two sites north of Salta, where my colleague Alejandro Pietrek is based: Laguna de los Pozuelos National Monument at 3500 meters and the Vilama series of wetlands, very close to the Bolivian border at 4500-5000 meters (15000-16000 feet).

Below: A map showing the location of Salta and the two wetlands areas we visited. 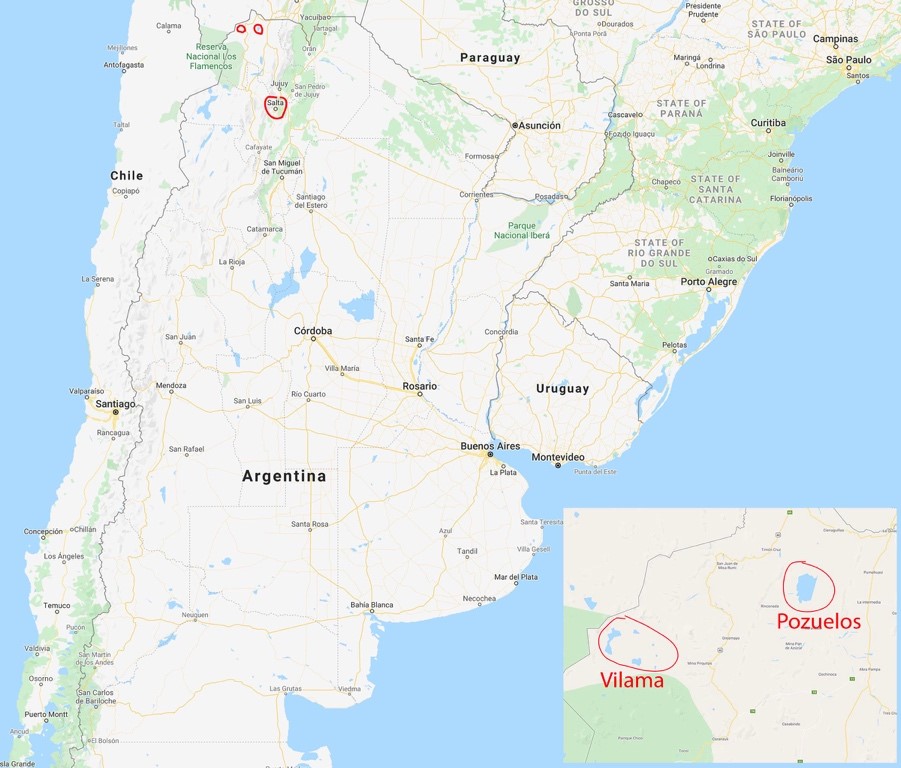 Below: Alejandro (right) bought his colleague Enrique Derlindati (left) along because he knows all of these high Andes wetlands very well from two decades of flamingo studies. Both of these guys were a fount of natural-history information and I felt like I was on a private tour. Enrique is holding a mummified horned coot we found at the high elevation site. 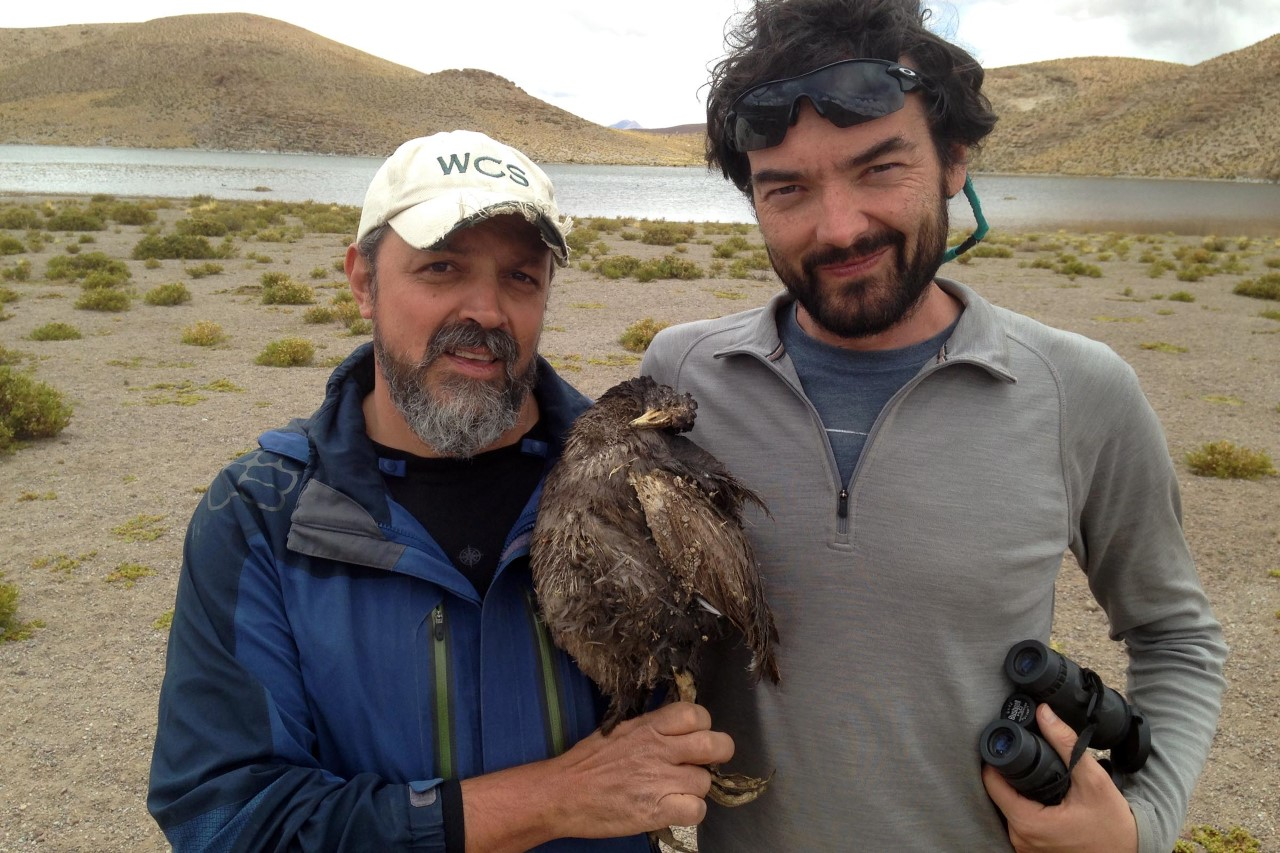 An interesting feature of horned coots, but one that makes them tough to study, is that their breeding sites are not always predictable—in some years a lake can have very dense nesting populations and then the next year none at all. It turned out that this was an off year for Pozuelos—no horned coots. However, Pozuelos is famous for flamingos—and waterbirds generally—and we saw lots of them, so I will focus on flamingos for this first post.

Below: South America is the only place in the world where one can see three species of flamingos on a single lake, and we saw all three species at Pozuelos. I initially found the species tough to distinguish until Enrique showed me what to look for. In addition to plumage differences (how much black shows on the folded wing) and leg color differences (yellow vs reddish), the faces are also quite different. Andean flamingos (Phoenicoparrus andinus)have dark eyes, yellow legs and show lots of black on the folded wing; Chilean flamingos (Phoenicopterus chilensis) have pale eyes, pink knees and lots of pink but no black on the folded wing; and Jame’s (Puna) flamingos (Phoenicoparrus jamesi) have dark eyes, a dark red patch between the eye and beak and red legs. NOT MY PHOTOS, PILFERED FROM THE WEB.

The reserve rangers at Pozuelos gave us permission to wade out into the lake to look for coots and coot nests. Out in the water we were often surrounded by feeding flamingos and there were also lots of flocks flying very close to us, giving us breath-taking views.

Below: In terms of species identification, here is a “Where’s Waldo” photo—see if you can spot all three species. Most of the birds are Andean flamingos, but there is a tiny part of the photo where all three species can be seen together. 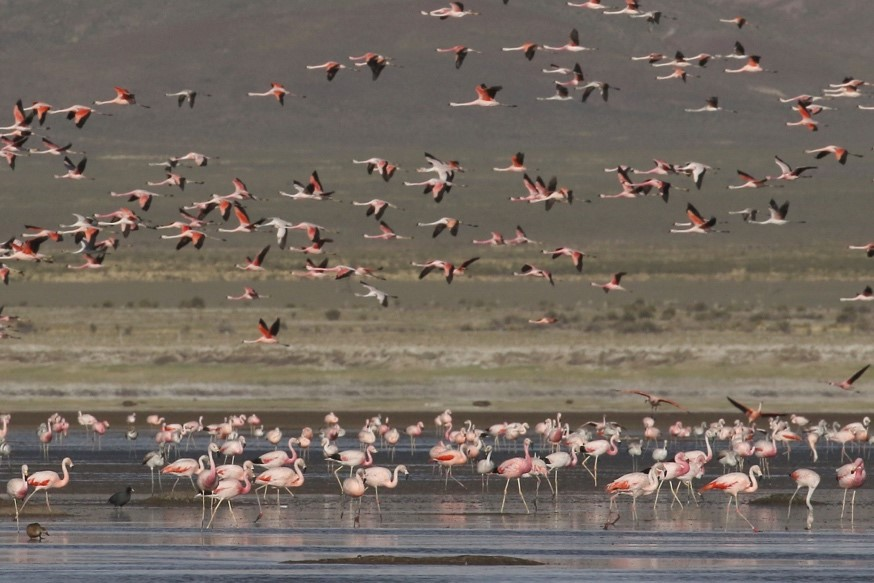 Below: An enlargement of the section with the three species. From right to left, the bird in front is an Andean (dark eyes, yellow knees, lots of black on wing), the bird to the left and behind it is a James’s (dark face, bird facing left) and its neighbor to the right is a Chilean (pale eye, no black on wing, pink knees). 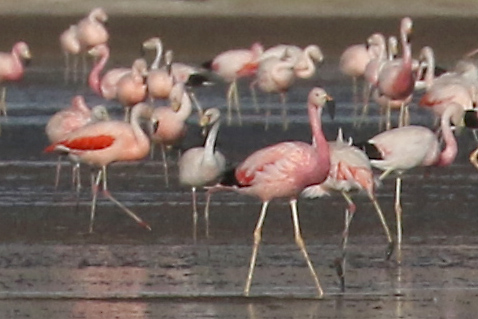 Below: An Andean flamingo in flight. 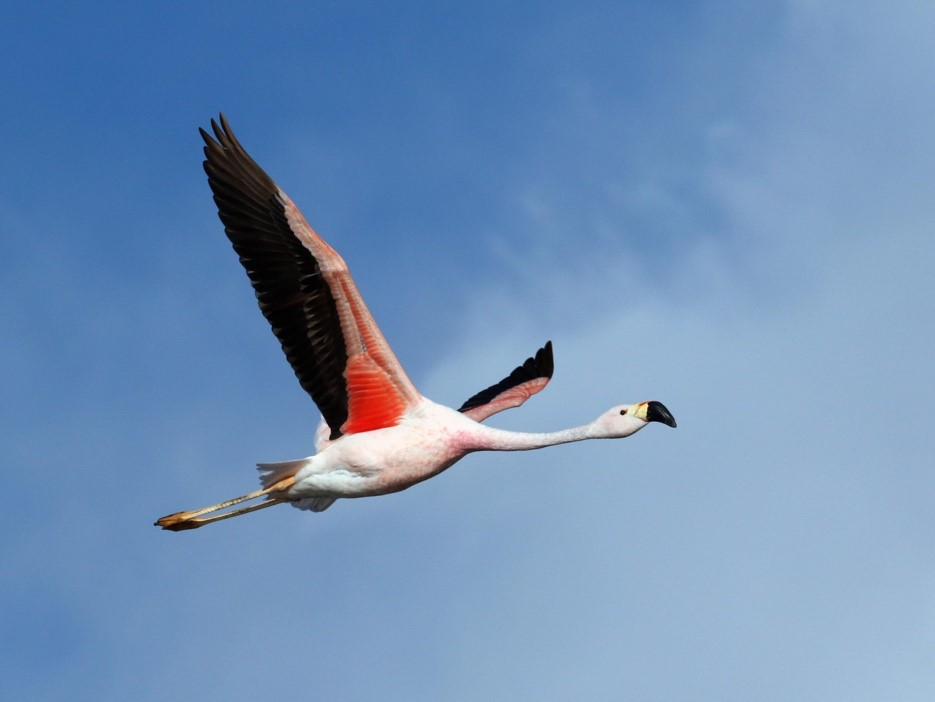 Below: Another view of the same bird. 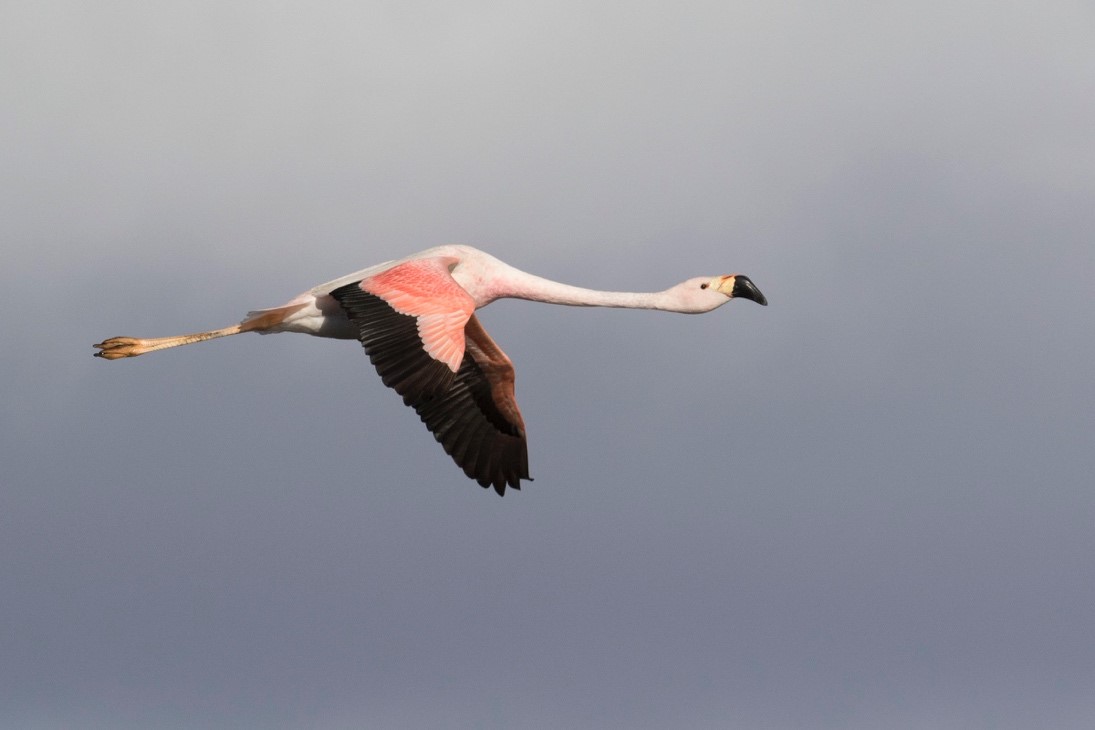 Below: A small flock of Andean flamingos. Note the variation in amount of pink on the neck. 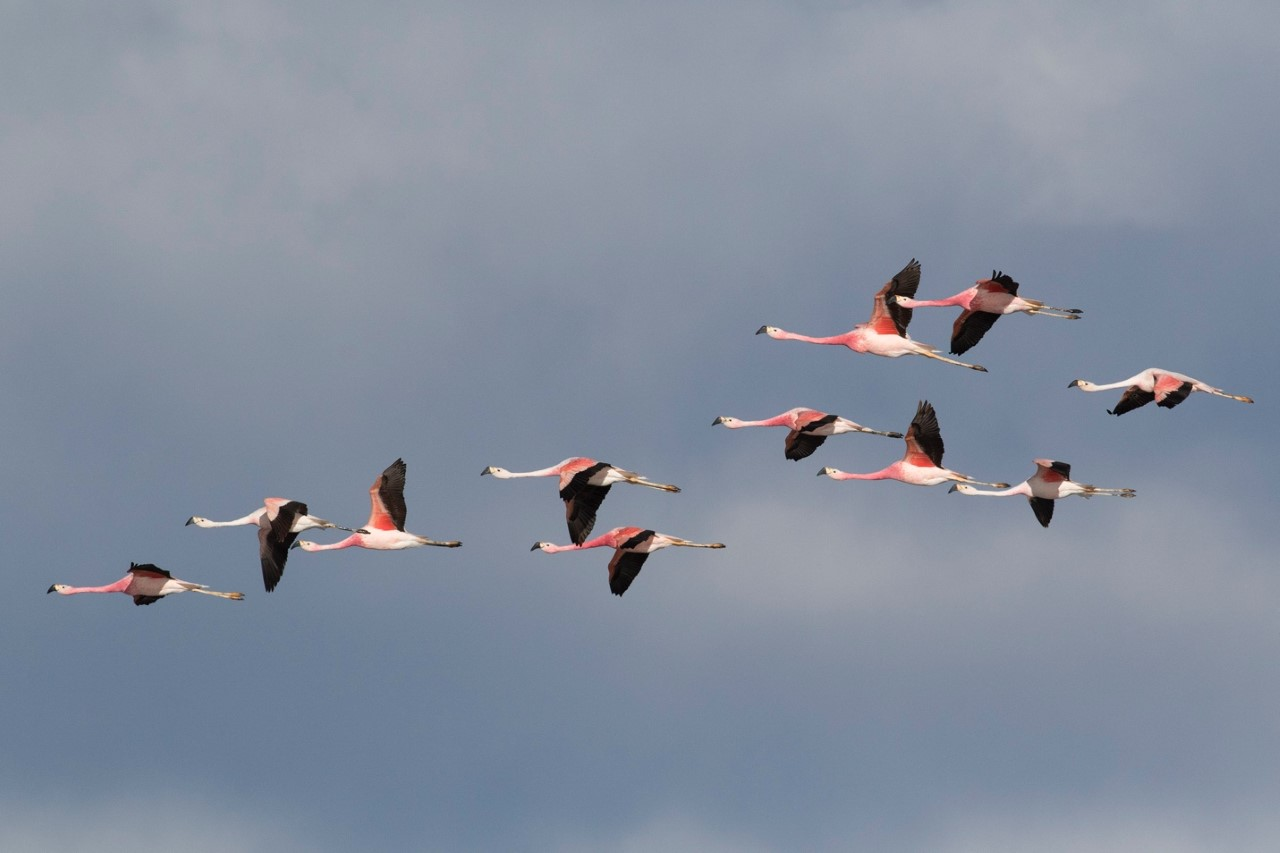 Below. A view of the lake with a small flock of Andean flamingos passing by. Note that there are lots of coots in the lake but the wrong kind: a mix of Giant and Andean coots. 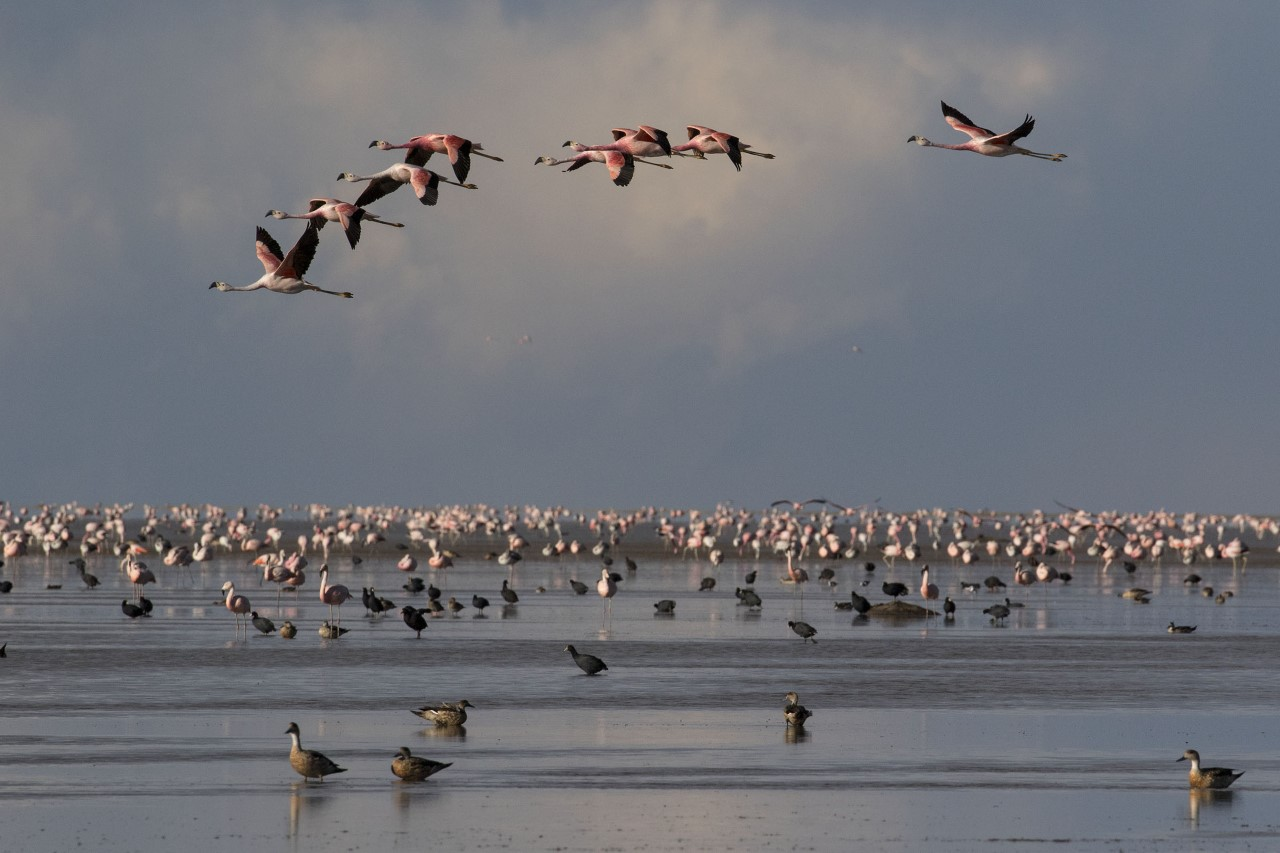 Below: Another view of the scene at the lake. 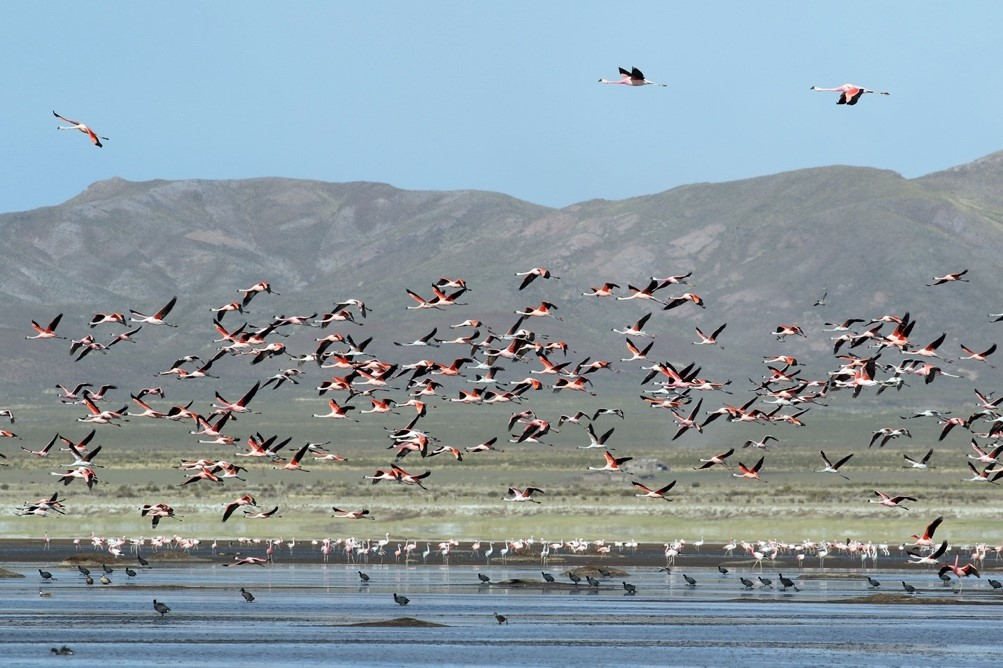 Below: We found a flamingo carcass with an intact skull. Enrique used the skull to explain the details of flamingo feeding to me. Most people know that flamingos are filter feeders who feed with their head upside down, pumping water through their beaks to keep in food particles while getting rid of stuff they do not want. However, I had no idea about the subtleties, specifically the degree of control the birds have over the size of food particles filtered and consumed. 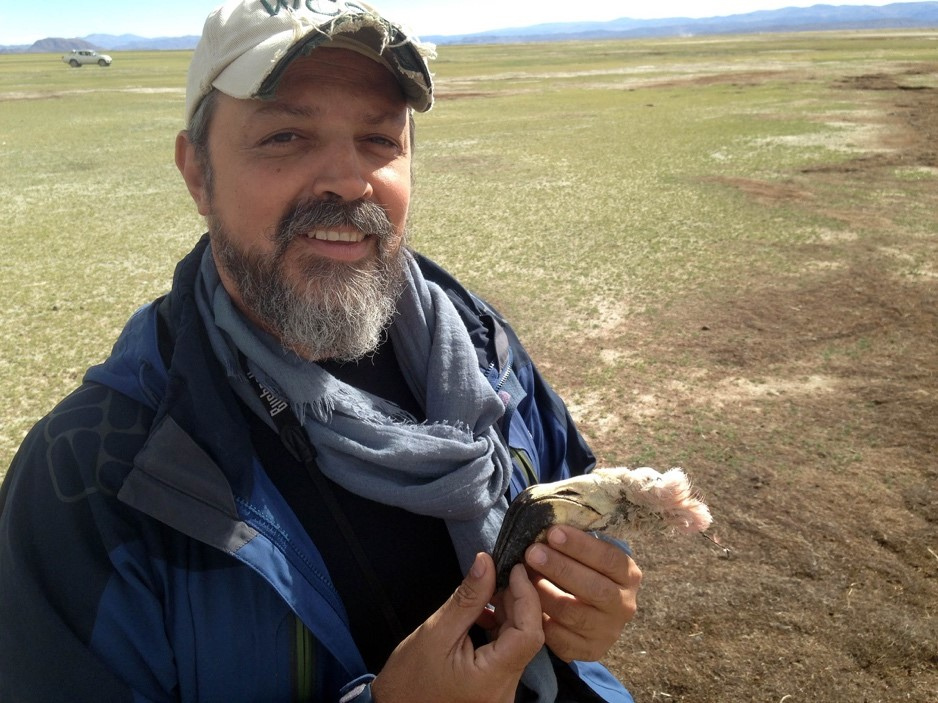 Below: I forgot to take a close p of the skull to show the morphological details, so I searched for a photo online that shows those details. This spectacular photo by Matt Soave of an American flamingo (Phoenicopterus ruber) at the San Diego Zoo nicely shows the beak details. Flamingo beaks have complex rows of hair-like lamellae that are used to strain particles from the water.

The control the birds have over the size of particles filtered out may be possible, in part, because the spacing between the lamellae varies along the length of the beak. One study fed captive birds mixtures of food particles of different sizes (peas, millet, etc) to study the degree of control—and selectivity—the birds have. They found that birds could be selective, within a millimeter accuracy, for particles ranging in size from 1 to 4 millimeters. This suggests that the birds could selectively feed on some prey items and exclude others based on prey size. Beak structure, including the spacing and distribution of the lamellae, also differs among the three South American species and stomach content analyses suggests that the three species may eat different sized prey items. 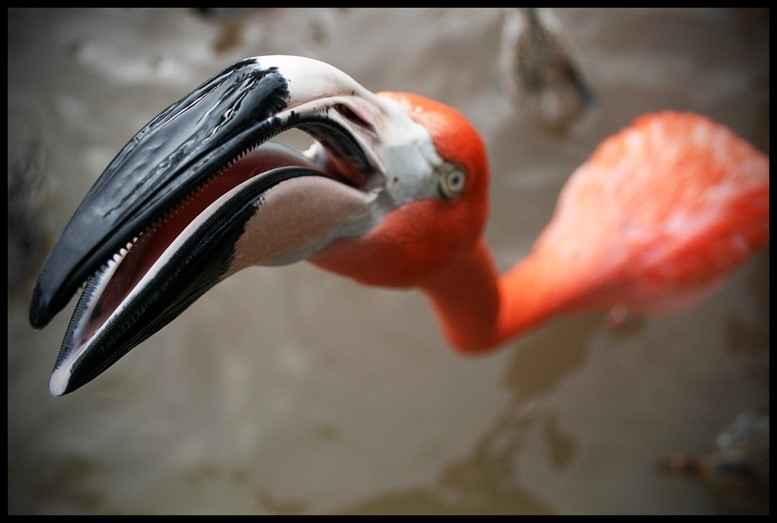 Below: I found an old paper with this interesting drawing comparing two filter feeders: a flamingo and a whale. The paper claims that the basic aspects of the filtering mechanism and structure are very similar—and hence convergent—in flamingos and baleen whales. One shared aspect of filter feeding is that both of these animals eat prey that are minuscule compared to their own body size. Andean flamingos apparently eat lots of tiny diatoms: microalgae with silica cell walls. 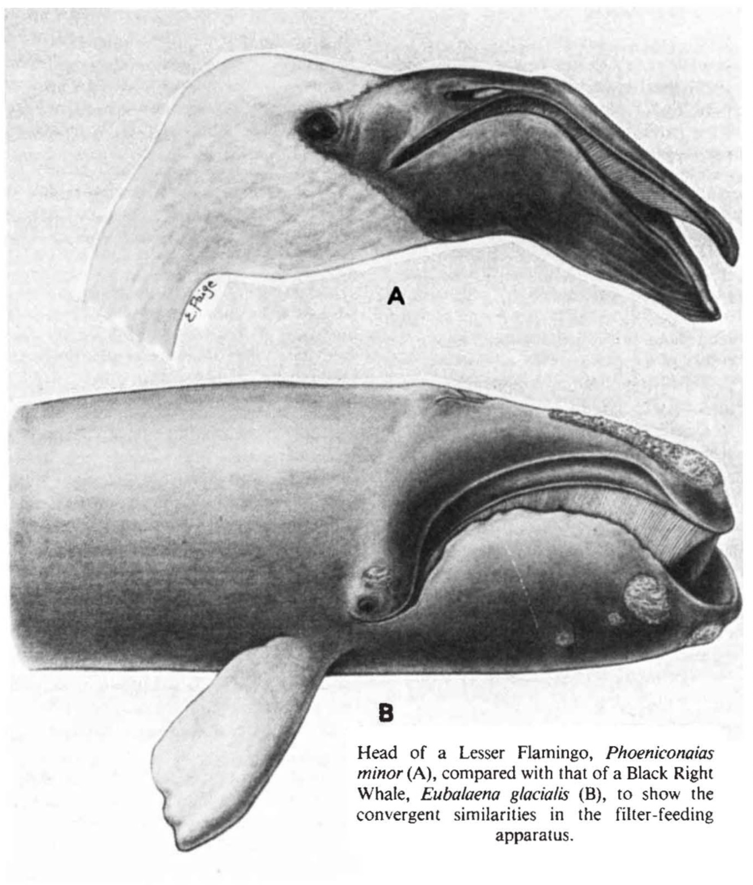 Below: A video I found online that shows filter feeding in captive Andean and Jame’s flamingos. Note the water that occasionally squirts out from the beak as the birds pump water our through the lamellae.

Below: The little pools of water in the foreground are apparently how Pozuelos gets its name. “Pozuelo” means well or little pool, and according to Enrique these particular little pools are made by flamingos. If I recall correctly, the flamingos sometimes stamp their feet (‘foot paddling’) while feeding, to stir up the soup of prey items they feed on, and the stamping causes the depressions shown here. Interestingly, a migratory species of shorebird, the Wilson’s phalarope, often forages in association with foot paddling Chilean flamingos and one study found that these phalaropes had double the foraging success compared to phalaropes that foraged without a flamingo buddy. 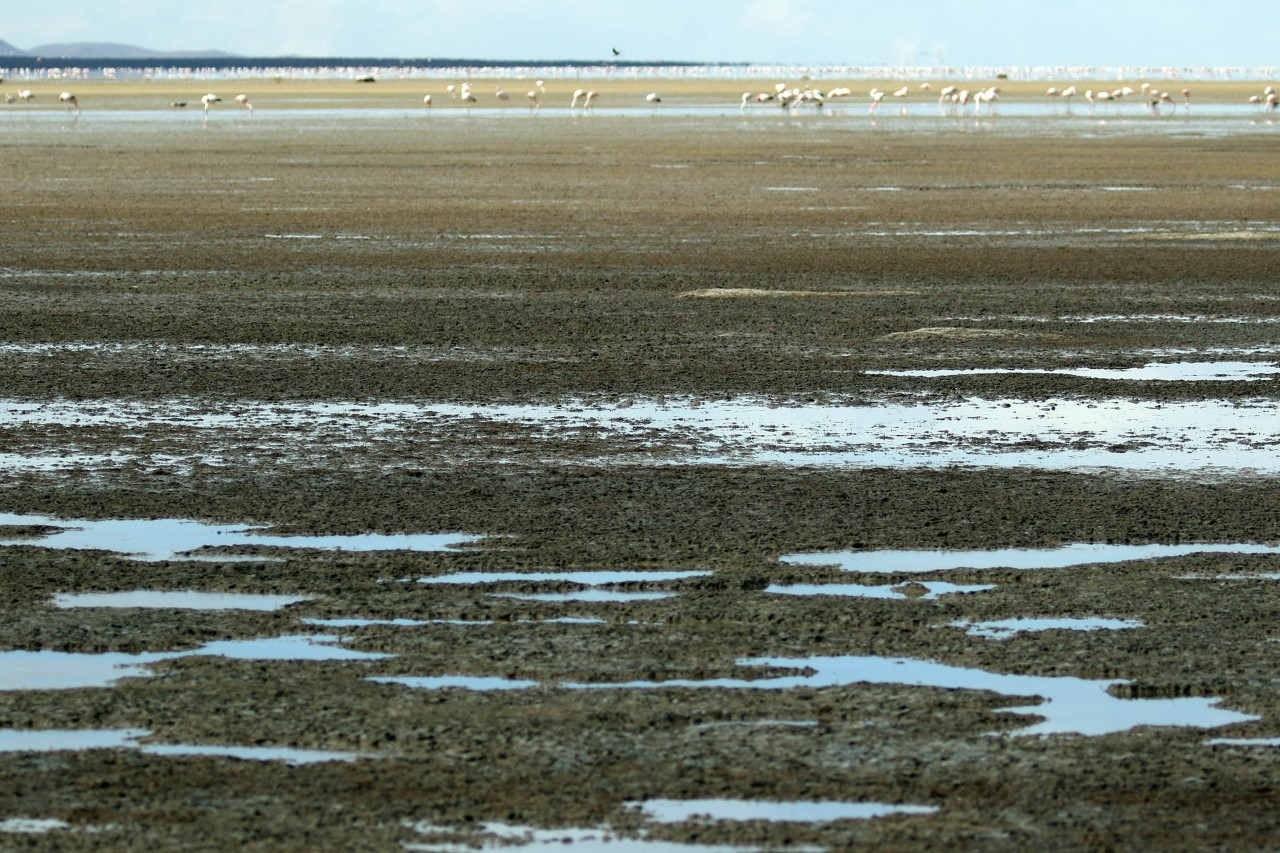