Bruce Lyon, our professor of ecology and evolution at the University of California at Santa Cruz, has sent another installment in his continuing and engrossing series on coots. This counts not only as a photography post, but as a science post, so be sure to read his text (indented), which describes experiments to figure out why the chicks look so damn weird!

The following scene should be familiar to anybody who watches nature shows on TV: a colorful highly ornamented bird bows and displays to some duller individuals watching intently. Typically this description would describe a mating display, where males display to attract females. However, the scene also describes family life in coots, where highly ornamented chicks display to their rather plain parents.

My first encounter with a baby chick was rather shocking because baby birds are not supposed to look like these do. Working on a duck research project in in central British Columbia near the town of 150 Mile House, I heard sounds I did not recognize coming from the reeds in a small wetland, so I waded in to find the source. The noise was coming from a baby American coot floating in the water—an orange monstrosity unlike any baby bird I had every seen. The chick, just out of the egg, was covered in fluorescent orange plumes, a naked orange top of the head, blue eye shadow and bright red nubbins around the eyes.

Below: a highly ornamented coot chick displays to its parent. 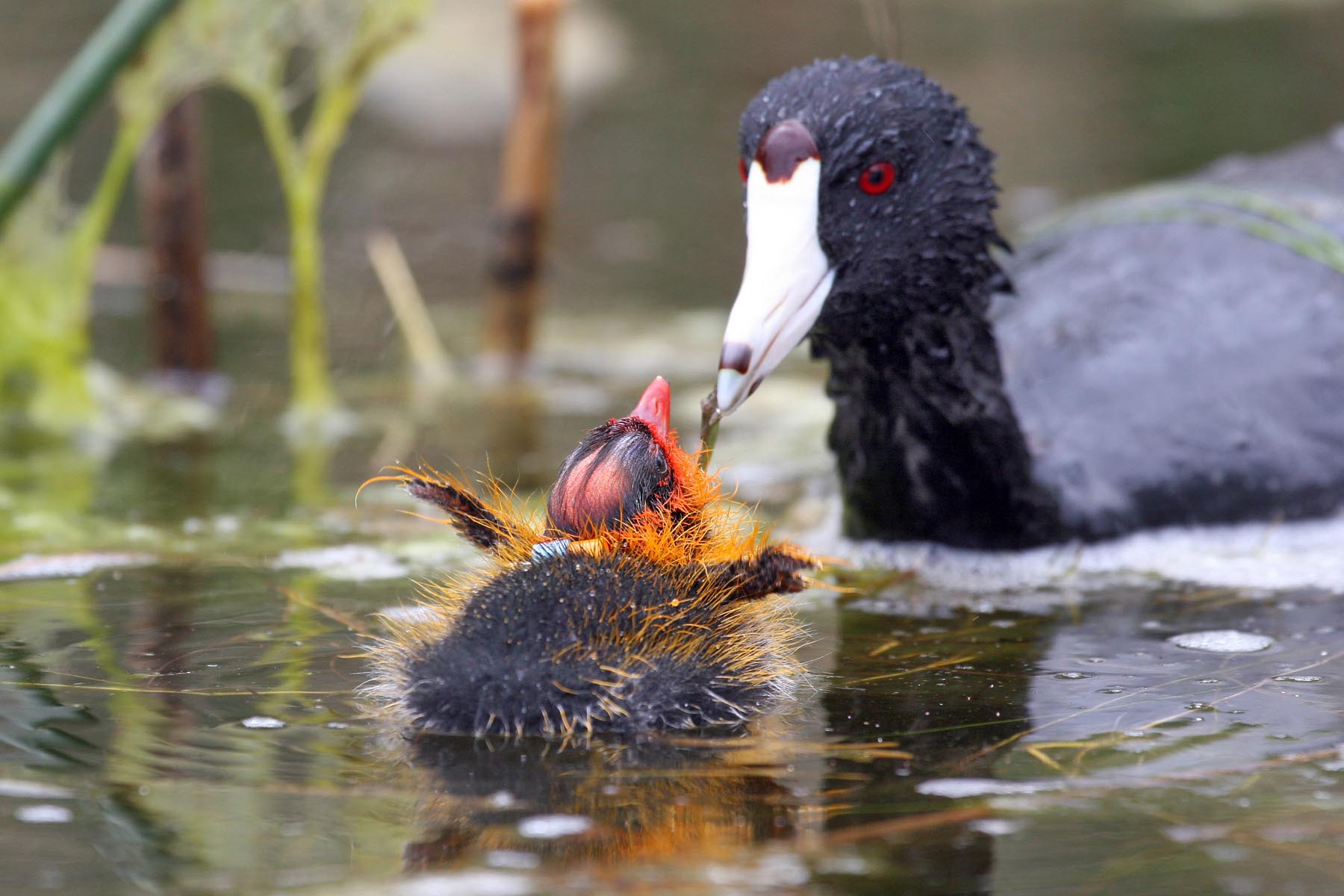 Below: A photo of three baby coots lined up on a rock waiting to be tagged. The word extraordinary is often overused, but I think it applies to these chicks. 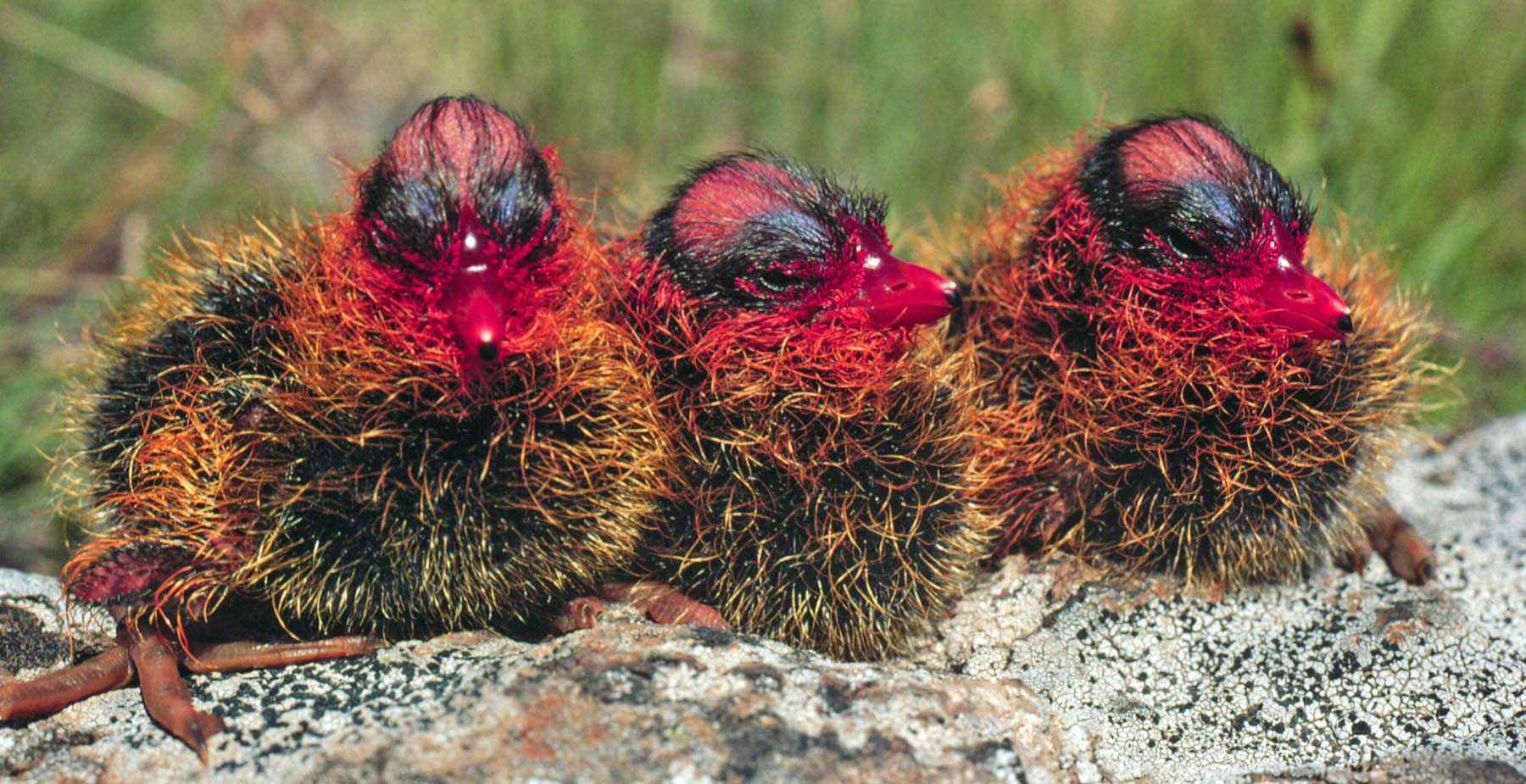 Below: Left. Close up of a baby coot’s face—note the funky red nubbins on the face near the beak. Right: Similar facial nubbins are found on male ruffs (Calidris pugnax), which is interesting because this sandpiper has a lek mating system. A lek is where groups of males gather in a mating arena and display to attract female. Lek mating systems often have extreme sexual selection and highly ornamented males, like ruffs or birds of paradise. We expect extreme ornaments on males in lekking species, not in baby birds.

Below: These two herring gull (Larus argentatus) chicks show what self-respecting baby birds are supposed to look like—these chicks are doing their best to resemble a rock. Baby birds are tasty and helpless, so camouflage makes sense. 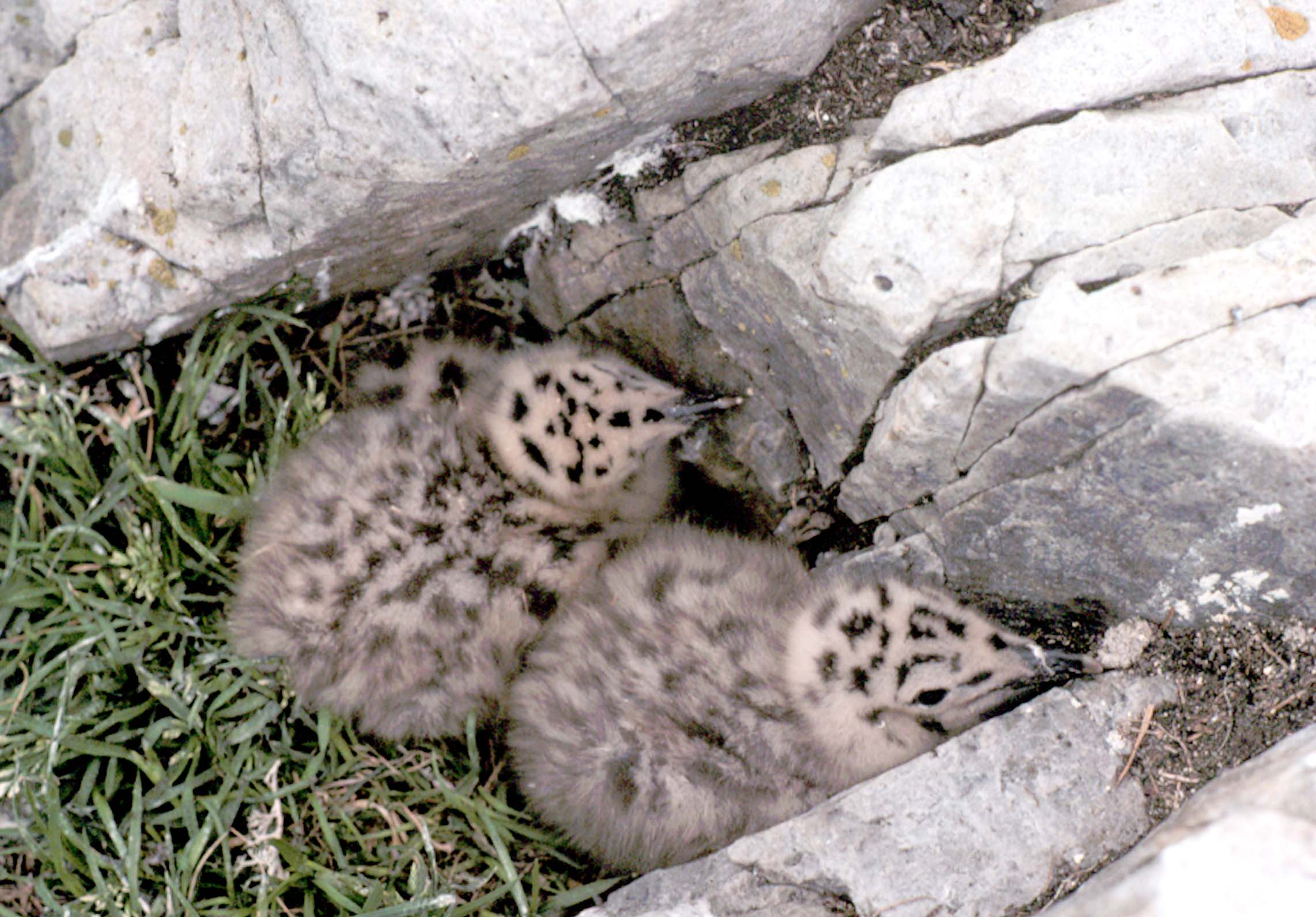 At least to the human eye, coot chicks are anything but cryptic with their crazy ornamentation and doodads. Ornamental plumage in birds is typically associated with sexual selection; in fact bird ornamentation played a key role in motivating Darwin’s sexual selection theory (three chapters of his sexual selection book were devoted to birds). He proposed that the ornamental traits are evolutionarily favored because they increase mating success (typically but not always in males), either because females prefer ornamented males or because the ornamentation helps males win fights over access to females or resources females like. Clearly this explanation does not apply to a baby coot fresh out of the egg.

Right after my first coot chick encounter, I described the bizarre chick to my friend John Eadie (now a professor at the University of California Davis) over dinner at the field house. As nerds often do, we couldn’t help brainstorming about possible explanations for the bizarre plumage. John suddenly remembered an idea by Mary Jane West-Eberhard that seemed like a perfect explanation: parental choice theory. This idea was part of West Eberhart’s broader social selection theory, theory that sought to expand aspects of Darwin’s sexual selection ideas to contexts beyond mating. West Eberhard, an evolutionary biologist who specializes on social insects, noted that mechanisms of choice and social competition occur in a variety of contexts beyond mating, and these mechanisms could in theory lead to the same types of traits produced by sexual selection. Her parental choice idea is analogous to mate choice, except that the choosy individuals are parents rather than individuals seeking mates, and the parents’ preference is for characteristics of offspring, not mates. The idea is simple: in species where parental food is essential for offspring survival, ornamented offspring might evolve if parents control food allocation among their offspring and happen to prefer to feed more ornamented offspring over less ornamented offspring. The assumptions of this theory apply to coots perfectly: as discussed in previous posts, parent coots use aggression to control which chicks are fed and food is so critical to chick survival that many chicks die because they are not fed enough. Eadie and I did not get around to testing these ideas until after I had done my PhD work on the coots, which was good because my PhD work allowed me to figure out the field methods needed for studying coot parental behavior.

Below: Ornamental coot chick feathers up close. The feather structure enabled an easy way to experimentally alter chick plumage: simply removes the orange feather tips. The ornamented body feathers have two parts: a black base with the normally downy feather structure that provides warmth to the chick and a naked orange shaft that extends beyond the down. Cutting the tip removes the color but not the fluff. The little red blobs in the upper left are the red facial nubbins—these are highly modified, have no down and are too small to be modified by trimming tips. 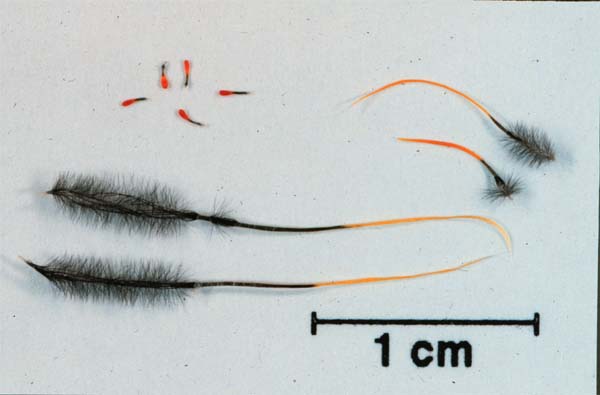 Below. It’s “haircut” time!  To test if parent coots have a preference for ornamented chicks we experimentally dulled half of the chicks in each brood by trimming the orange tips from their body feathers.  (In a later study we used electric trimmers, much faster than scissors.) The facial nubbins were left as is. 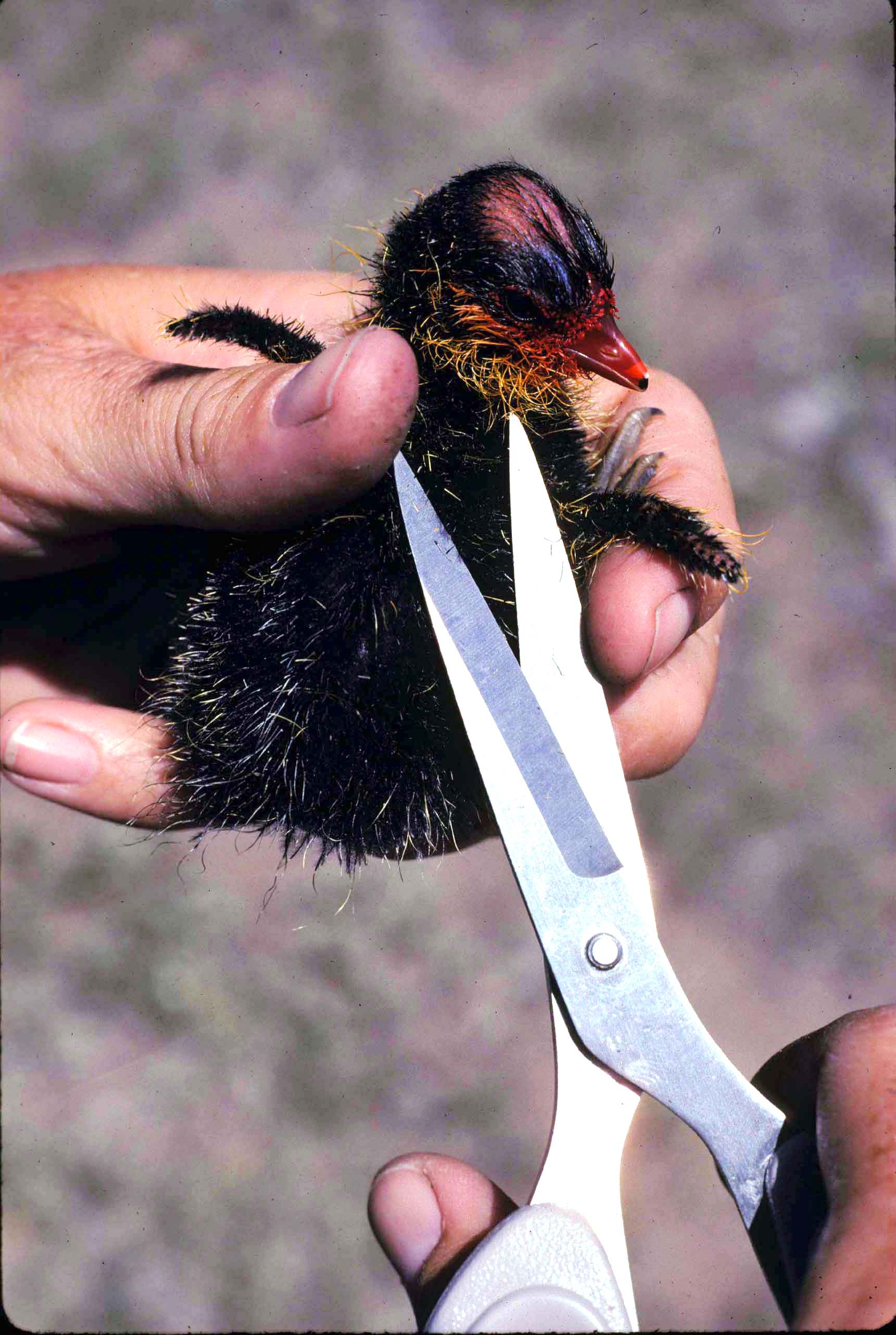 Below: In each brood, we alternated the trimmed and untrimmed chicks with hatching order because hatching order is such a strong determinant of survival within broods. A coin toss determined whether the first chick to hatch would be trimmed or not, and we then alternated the two treatments as the chicks hatched.  As this photo of an untrimmed and trimmed chick shows, trimming dramatically reduces the ornamentation and appearance of a  chick. Trimmed chicks are, however, still cute and fuzzy! 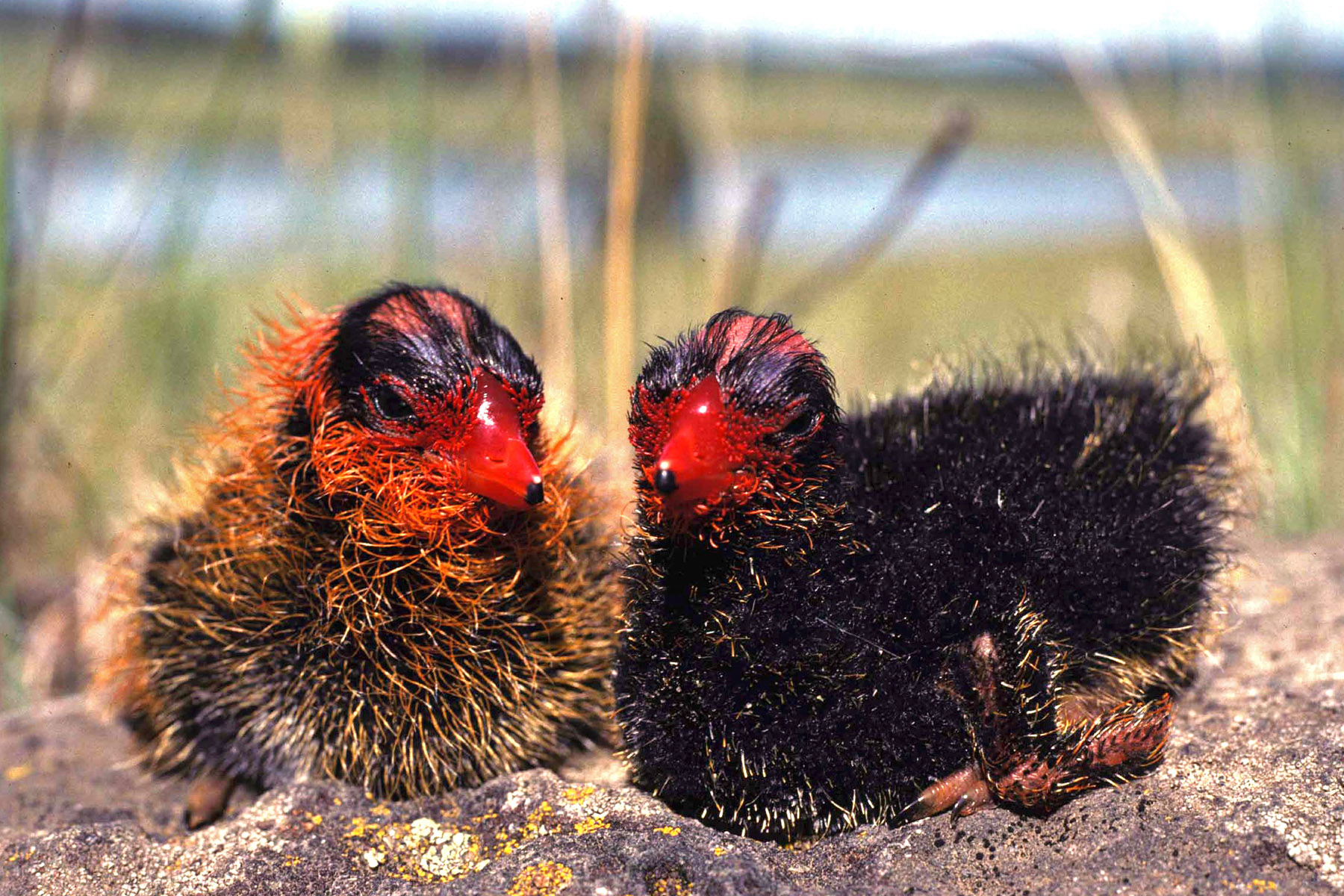 Below: Interestingly, most rails, including some species of coots, have plain black chicks so our experiments created an appearance that is not completely novel for coots and other rails generally. Moreover, a rail phylogeny shows that chick ornamentation is a derived trait (i.e., evolved more recently), so trimming chicks recreates an ancestral feature. Photo of a water rail (Rallus aquaticus) chick from Europe (photo Gunnar Pettersson): 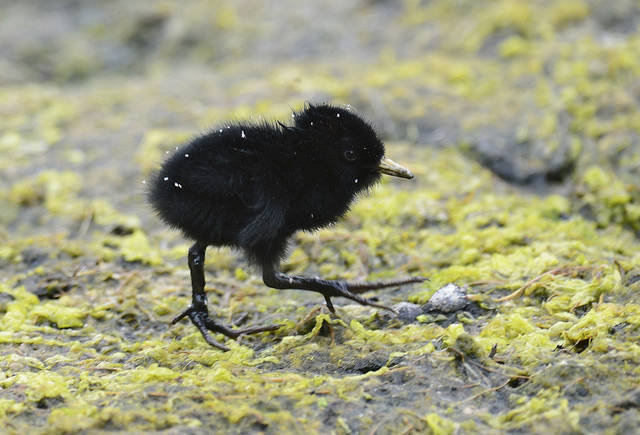 Below: A cartoon that I use in seminars shows the key results of the experiment. Within broods, the ornamented chicks were fed far more, grew more rapidly and had much higher survival than their non-ornamented siblings. Our experiment confirmed a key aspect of West-Eberhart’s idea: coot parents have a strong preference for highly ornamented chicks and, in an experimental setting at least, this preference has a big impact on the survival of the ornamented chicks. Ethical note: on average, 50% of the chicks in natural broods die of starvation and our experiments did not increase chick mortality but simply altered which chicks lived or died. 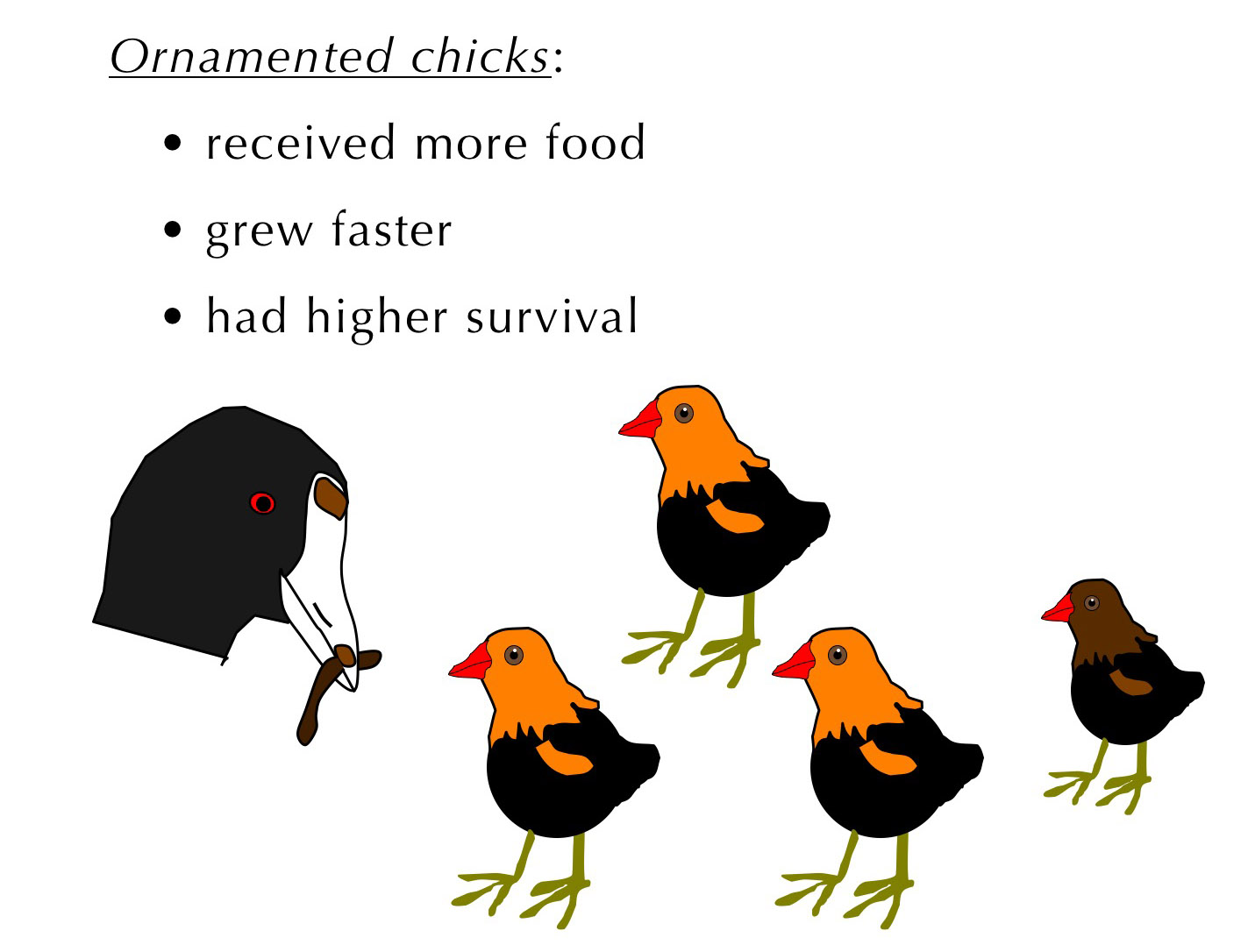 As an aside, ornithologists normally capture chicks to weigh for growth rate data. We could not do that because within a day of hatching coot chicks are too damn good at hiding and are almost impossible to catch. I therefore developed a method of photographing recognizable individual chicks (based on their tags) from a floating blind while at the same time accurately determining the distance between the chick and camera (I turned my telephoto lens into a range finder). When photo distance is known, one can convert an object’s relative size in a photo to its actual size, using conversion factors obtained from reference photographs of known sized objects photographed at known distances. I was able to test the accuracy of this method because I raised a bunch of coot chicks in captivity and photographed chicks of known mass while they swam in a kiddie pool. The photo method turns out to be very accurate and we use it in all of our coot studies.

Below: Astute readers may realize that our experimental results could be explained by something other that parental preference for chick ornamentation. Maybe parent coots did not recognize the trimmed chicks as their own chicks, or even as coot chicks at all. Or perhaps, counter to what I claimed above, maybe trimming does actually affect chick survival by reducing their ability to keep warm or dry. Fortunately, a chance discussion with a colleague highlighted this concern before we did the study and prompted me to think about a sham control treatment that could test for the effects of trimming itself. We created two types of control broods: broods where all chicks were trimmed and broods where none of the chicks were trimmed. We found that there were no differences between these two brood types in anything we measured: average feeding rates, chick growth or survival. This shows that trimming feathers per se does not affect chick success; it only matters when parents have both ornamented and unornamented chicks to choose between. The photo below shows an all-trimmed control brood: note that none of these chicks have much color, despite being very young. 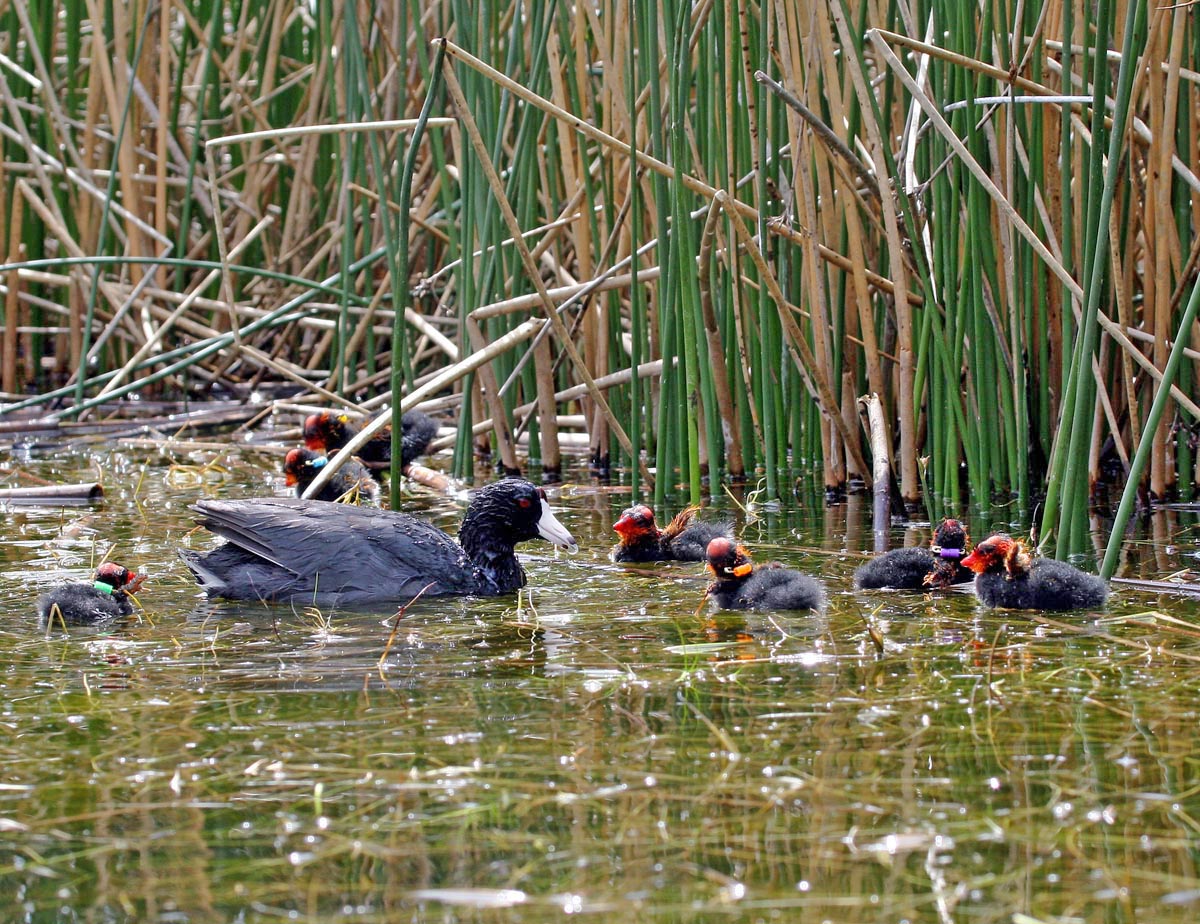 Our experiment showed that parent coots prefer ornamented chicks, but this then raises the question as to why parents have this preference in the first place. This question is much harder to answer than simply showing that they have a preference, but more recent studies I did on patterns of natural color variation suggest some possibilities (done with Dai Shizuka, my PhD student at the time). First, we looked at whether brood-parasitic chicks are more colorful than non-parasitic chicks—but in fact they are less colorful. Second, in addition to their colorful plumage, coots have bald heads that can change color fairly quickly from dull to bright and it may be that this skin color conveys useful information to the parents, for example reliable information about chick hunger or body temperature. If parents evolved a preference for feeding chicks with particularly colorful naked heads, this preference could then favor the evolution of chick traits that amplify the head signal: perhaps plumage color is a dazzle trait that mimics the brightest color of the naked head. Finally, another possibility is suggested by our discovery that within broods, later-hatched chicks tend to be more colorful (redder) than early-hatched ones. As I described in a previous post, when parents eventually take control of food allocation, they divide the brood and the parents specialize on feeding the youngest remaining chicks alive. Perhaps the orange coloration is an honest signal of chick age or size that helps the parents identify the smallest or youngest chicks still alive.

Below. A composite photo showing the plumage color and pattern of chicks of four different ages. The fluorescent orange plumage could be an honest signal of size (or age) because once the chicks hatch, they do not grow any new orange feathers. Given this, their coloration must dull as the chick grows and the orange feathers become more thinly spread over an increasingly larger surface area. Big chicks cannot lie about their size! It also seems that the feathers dull and fall out with age. 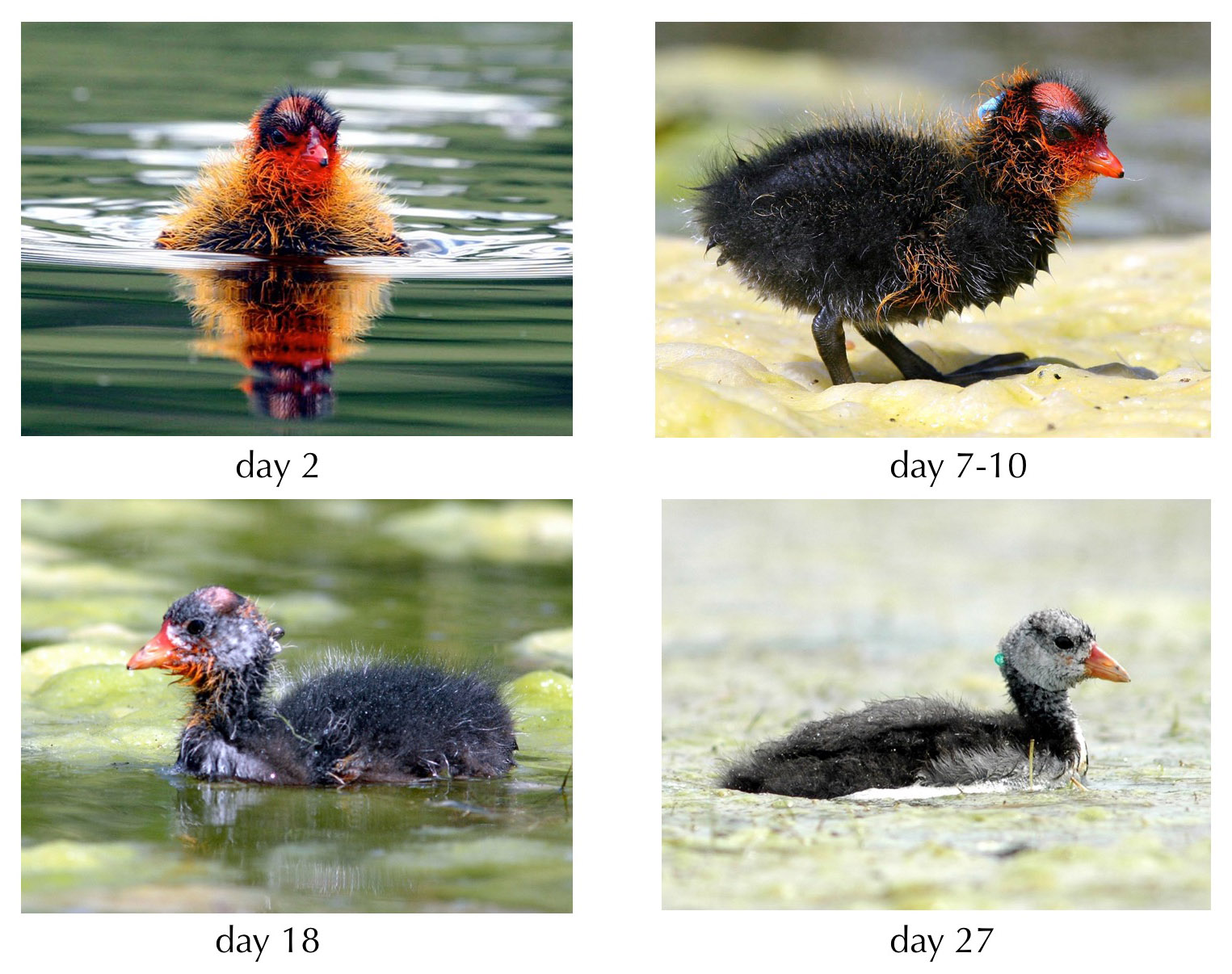