Reader Bruce Lyon, a professor of ecology and evolution at the University of Santa Cruz, has sent us another great photo-and-science post on coots, a wonderful and bizarre bird. I have to say that the phenomenon of brood parasitism, described below, is fascinating, and a great evolutionary tale.

Another installment of the American coot [Fulica americana] soap opera from studies my students and I have done on several wetlands in central British Columbia (previous posts here, here, and here). Soap operas are often spiced up with cheats and villains, and coots are no exception. When I went to BC in 1987 to start my PhD field research, I planned to study the various aspects of family life I described in previous posts. However, within a couple of weeks of starting the field work, systematic nest checks revealed fascinating cheaters in the system and I made a snap decision to focus on that aspect for my PhD research. Female coots were laying eggs in each other’s’ nests with wild abandon, and it was clear that coots provided a great study system for investigating these reproductive cheats. Many readers may be familiar with brood parasitism across species—like the cuckoos and cowbirds that lay their eggs in the nests of other species. There are actually more species of within-species parasites, but this form of brood parasitism is less well studied, partly because it is harder to detect.

When within-species parasitism was first observed, in ducks, it was called ‘dump nesting’. It was thought to be maladaptive (‘a breakdown of maternal instinct’), perhaps because it sometimes occurred at such high frequencies that it caused lots of nest desertion and reduced hatching success. At the time, there was also no conceptual framework for making adaptive sense of the behavior, but a few key papers in the 1980’s changed that by considering the behavior in an adaptive framework; and I stumbled into the phenomenon at just the right time.

Below: A photo of a coot nest with two eggs laid by a second female coot (the parasite eggs are the darker ones). 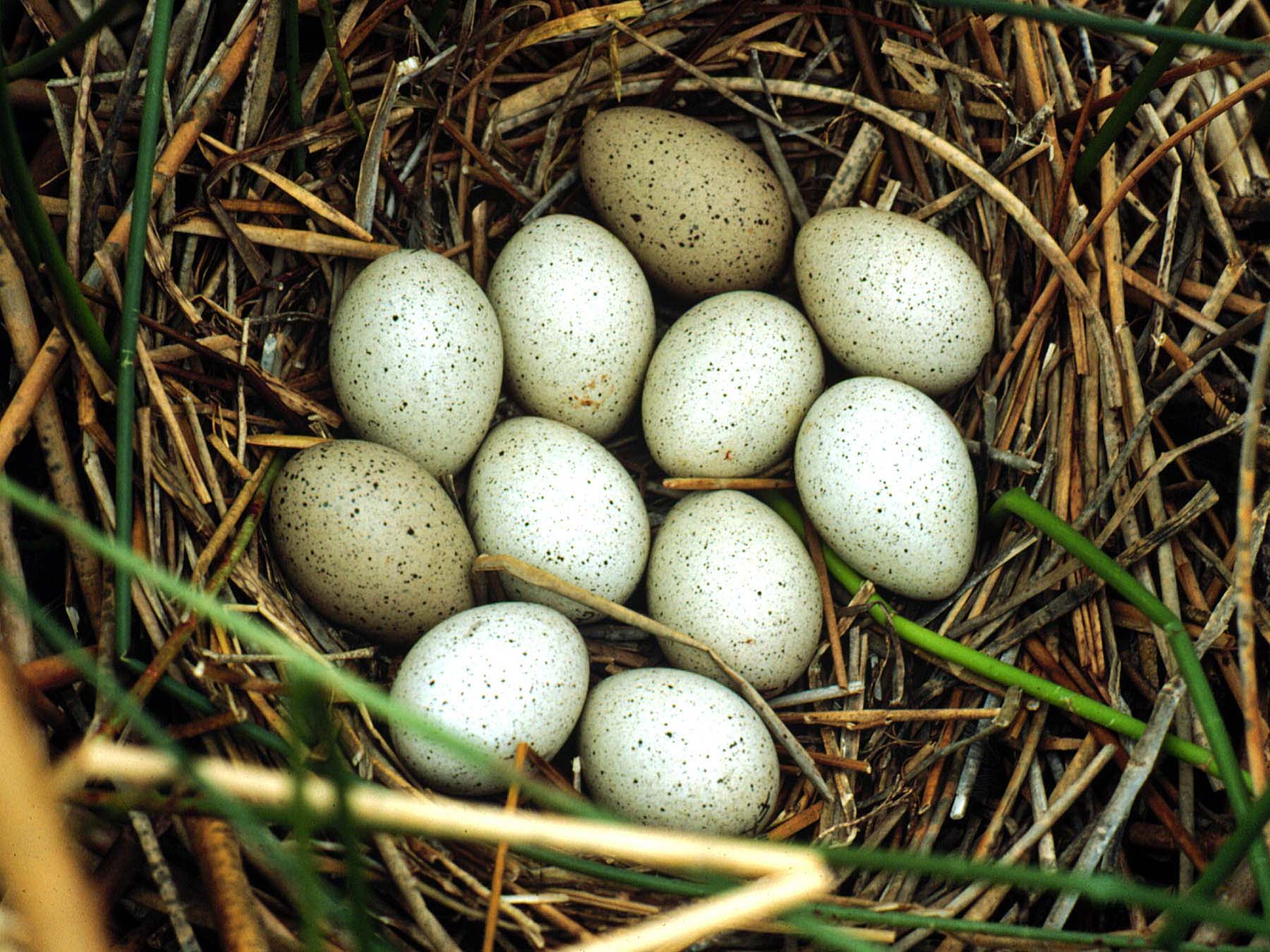 Below: An important first step was to make sure that these intriguing nests were not examples of cooperative group living coots—in several bird species multiple females share a territory and all lay eggs in the same nest. By marking coots with neck collars, it became clear that all territories had only one male and female, so I had discovered brood parasitism rather than cooperative breeding. Here is a photo of a territorial pair, sans collar. 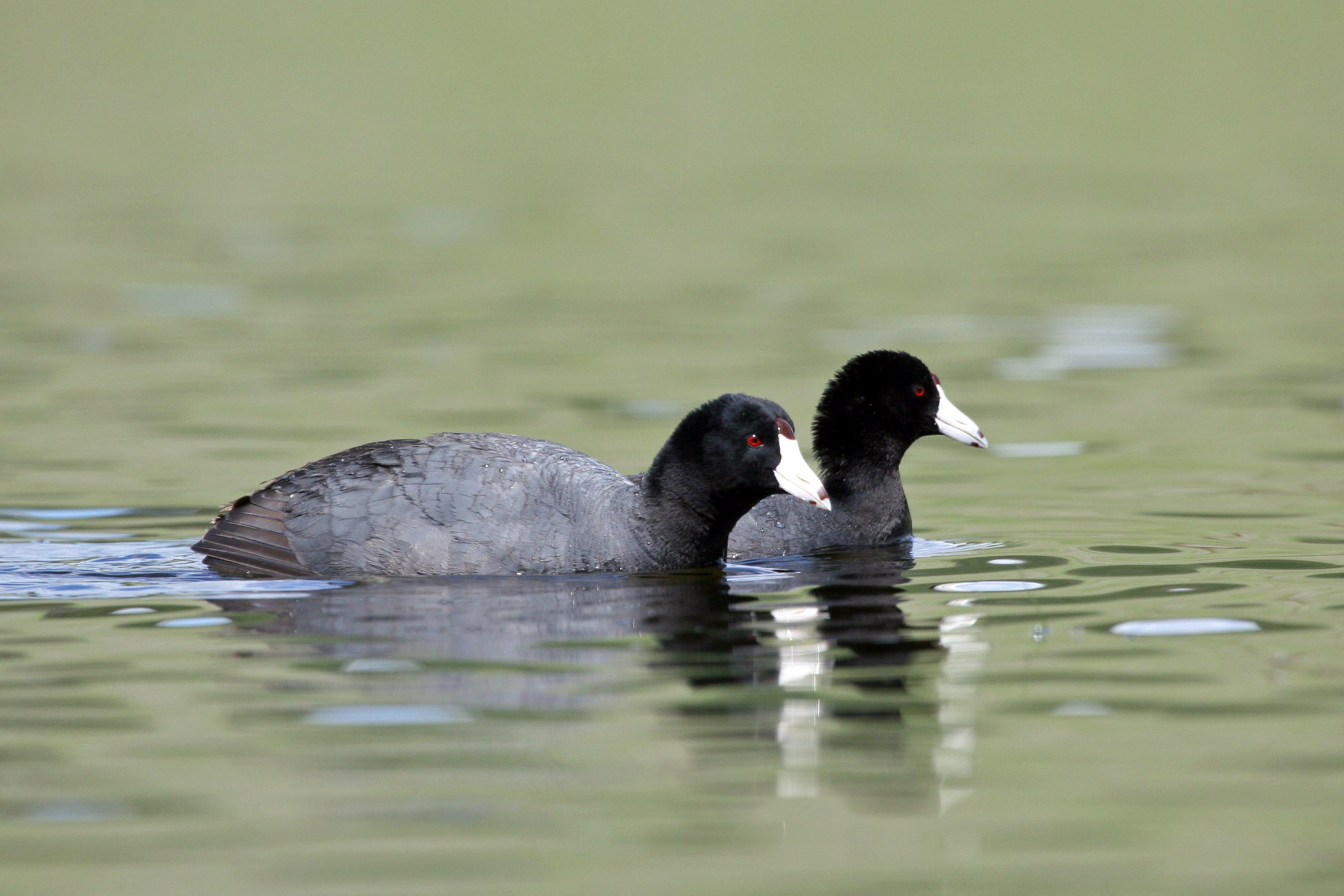 Below: Coot eggs vary a lot in color and markings, as this photo of eggs from several females shows. Eggs from different females differ in shape, background color and the pattern and color of the speckling. I find these eggs quite beautiful. 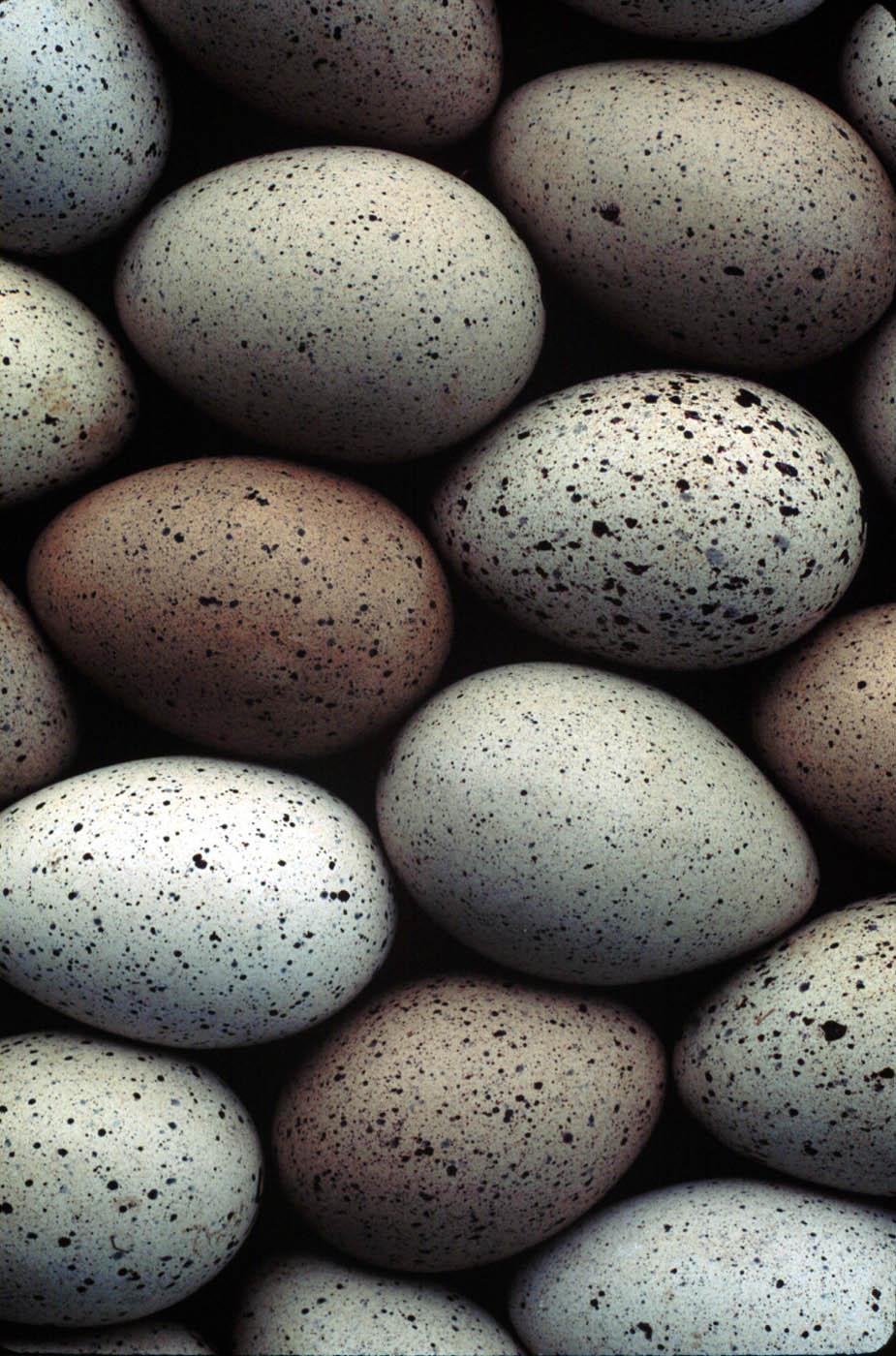 Below: Eggs from five females; each column has eggs from the same female. Note that eggs vary among females in features like shape, color and speckling pattern, but a given female lays very consistent eggs. This makes it possible match eggs laid by a given female. 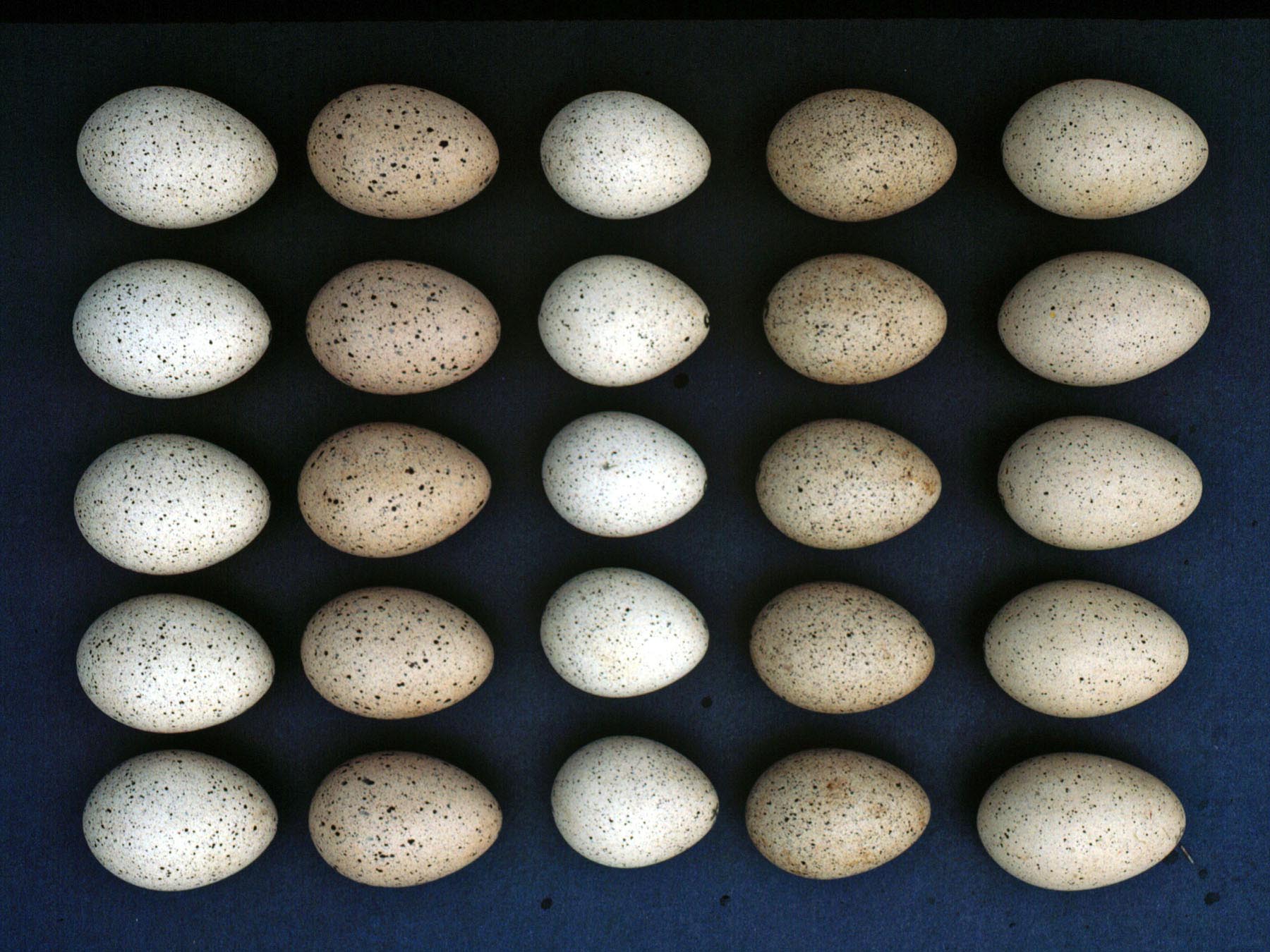 Below: Once a parasitized nest is detected by the unusual laying rate, we then identify which of the new eggs are the parasite’s and which are the host’s. Coots lay an egg every day, so when checking nests daily there should be at most one new host egg. Usually, one new egg looks just like the rest in the clutch (the new host egg) and the other new one(s) look different and are the new parasite egg(s). The photo below shows all of the eggs in one nest (7 host, 2 parasites) and illustrates that sometimes parasites differ strikingly from the host eggs (parasite egg P2), while at other times the difference is much more subtle (egg P1; speckles differ). Clearly two different parasites laid in this nest. A small-scale genetic study confirmed that our egg assignments were very accurate. 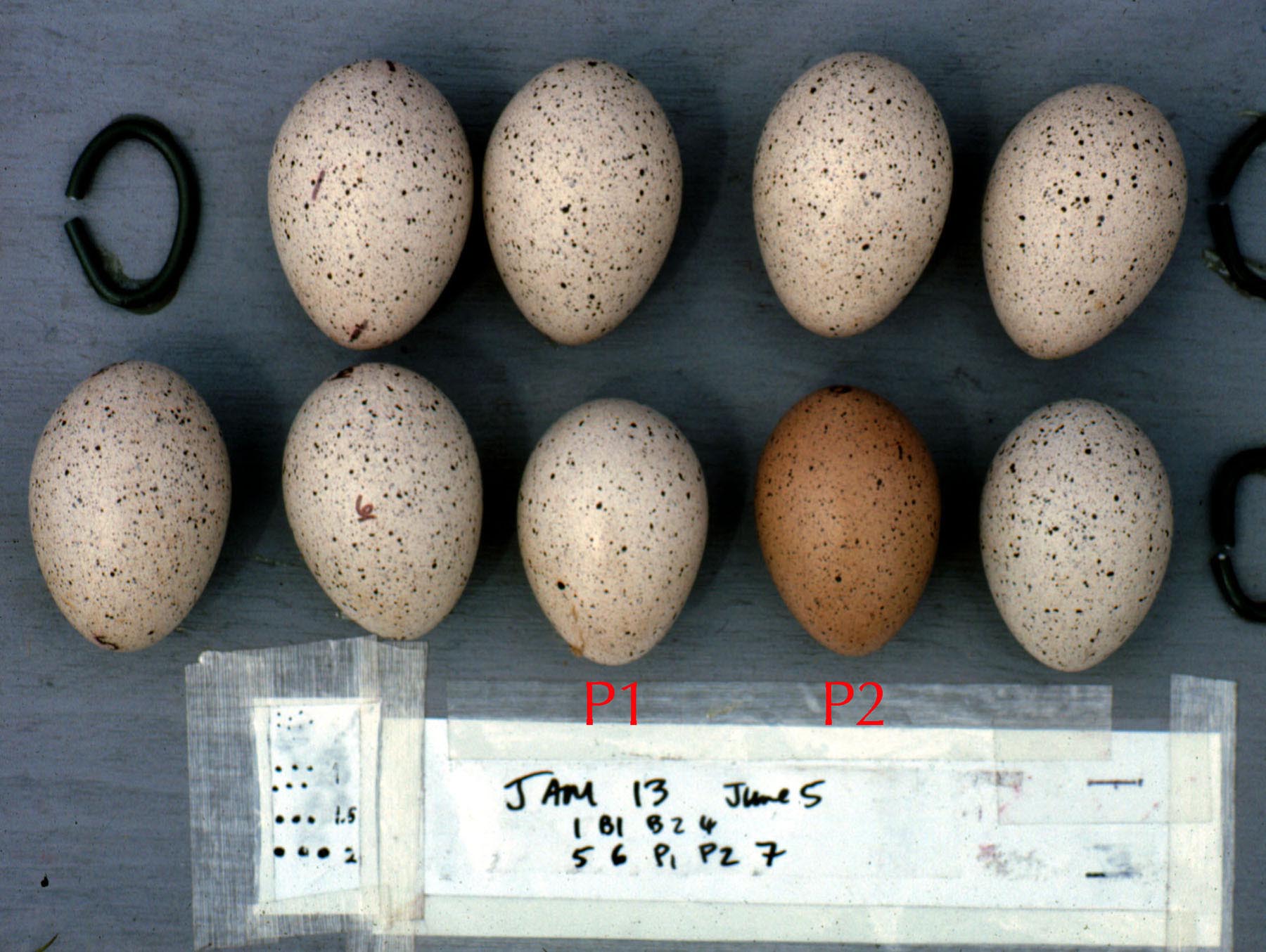 Below. We can also use egg features to figure out which females laid the parasitic eggs. We temporarily borrow parasitic eggs to compare them with eggs in other nests in the population. If a parasitic egg matches the owners’ own eggs in another nest it means we have found the parasite’s own nest. Most parasitism is in fact by nesting females, and these females typically parasitize a next-door neighbor. Below an intrepid field assistant risks an icy dunking (water over the top of the waders) to compare parasitic eggs (in the egg carton) to those in some nests in deep water. 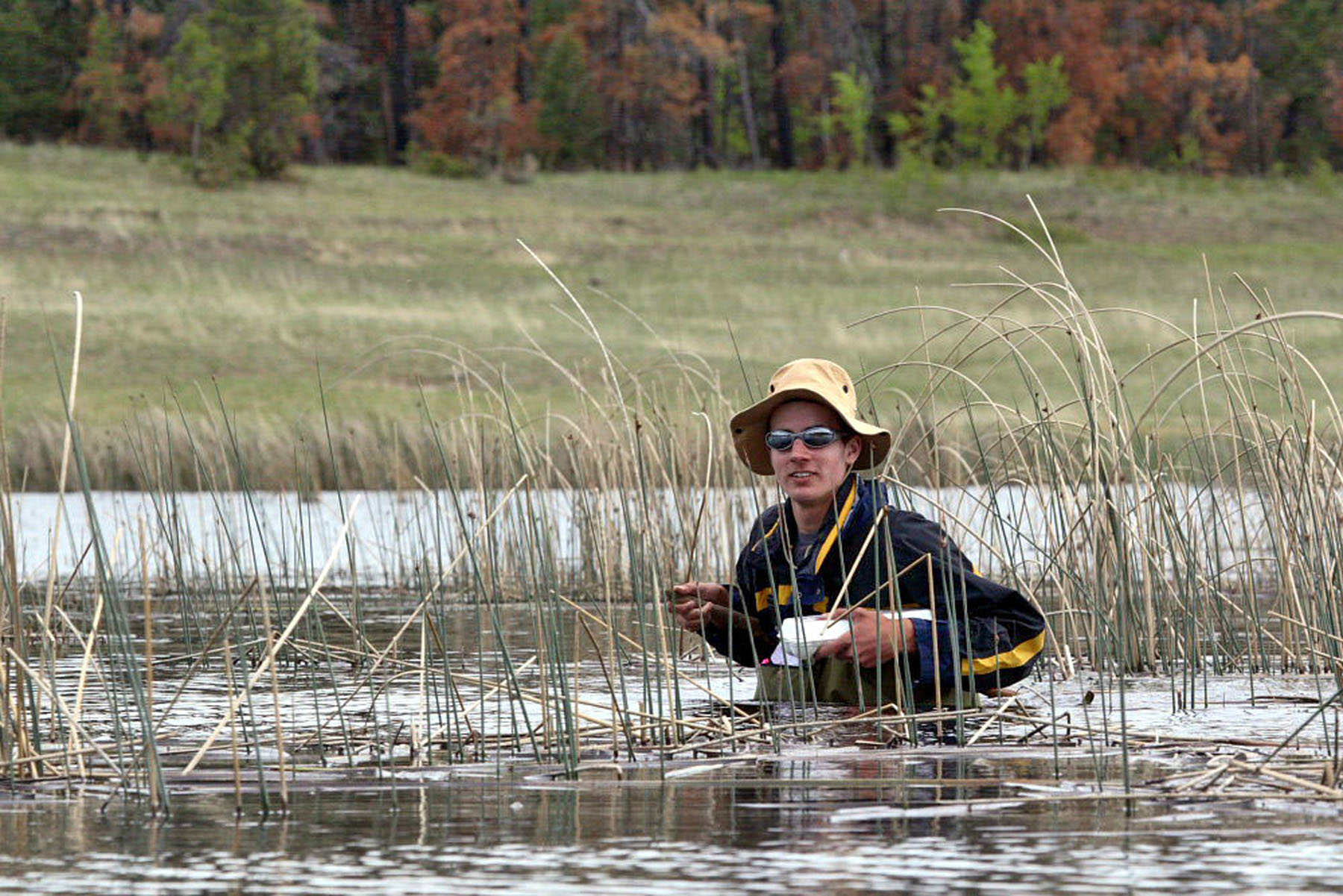 Below:  Nesting parasites typically laid their parasitic eggs before continuing to lay in their own nest—without skipping any days of laying. Brood parasitism by nesting females is particularly interesting because these females have their own nests: why not just lay the eggs in their own nest? Brood parasitism becomes a clutch-size problem, and I explored it in the context of David Lack’s clutch-size hypothesis. In coots, eggs are cheap but babies are expensive (because food for chicks limits family size), so most females can produce far more eggs than they can raise in their own nest. Parasitism allows them to produce extra eggs that can be fobbed off on the neighbors. Food is also limiting at the host nests, but if the parasites can lay the eggs early enough in the host’s laying cycle, they have a good chance of surviving—and it will be a host chick that starves instead. It’s basically a timing game—the early egg gets the worm. 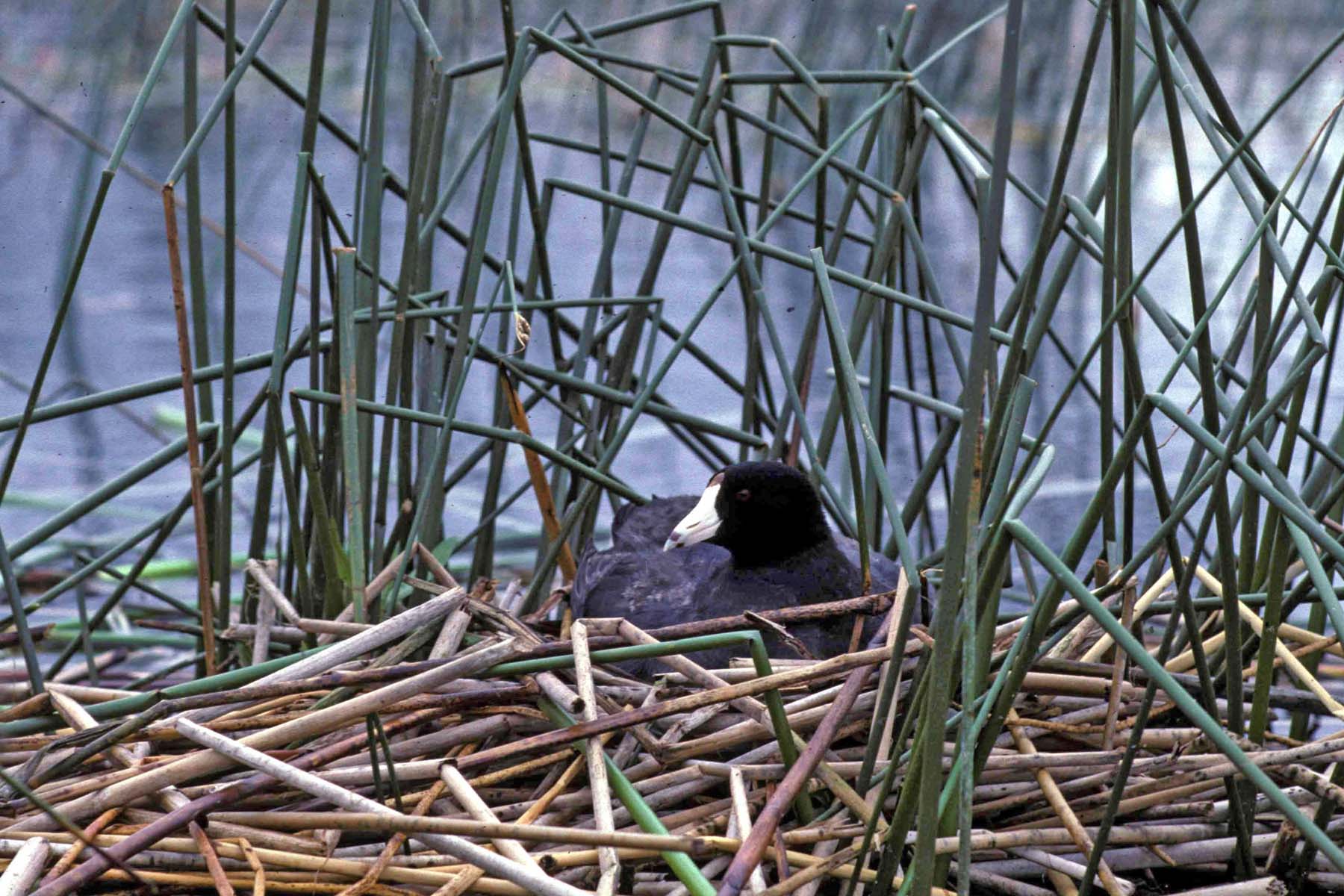 Below: There is a second flavor of brood parasite—females without nests or territories in a given year. About a quarter of the parasitic eggs could not be matched to any nesting female in the population, and I concluded that these eggs were laid by non-nesting females. These non-breeders are apparent on some wetlands where little gangs hang out in areas that lack vegetation and therefore are not suitable as nesting habitat (as photo below shows). At our wetlands, nesting densities are very high and occupy all suitable breeding habitat, so not everybody gets to have a territory. It seems that non-nesting parasites resort to parasitism as an alternative to not reproducing at all. Richard Dawkins coined the term ‘making the best of a bad job’ to explain this type of reproductive tactic—these parasites would establish a nest if given the chance but parasitism is better than nothing. 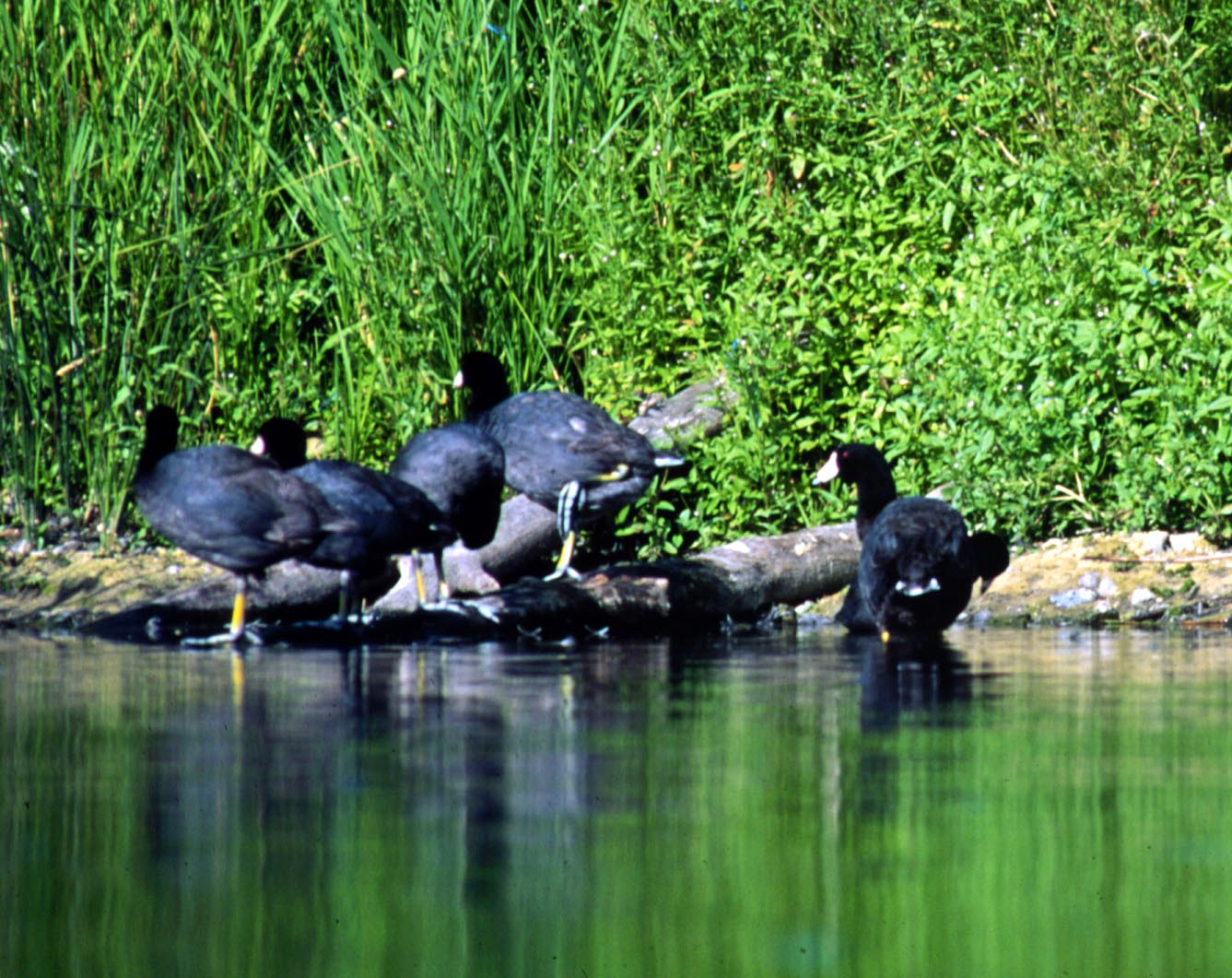 Below: Parasitism is good for the parasite but bad for the hosts. Given the chick starvation at most nests, raising somebody else’s chicks is very costly—each successful parasite chick costs the hosts one of their own chicks. Coots have evolved some clever mechanisms to reduce the costs of parasitism. Many coots recognize and reject parasitic eggs from their nest by burying the eggs down in the nest material (where the leeches get them!). About a third of parasitic eggs are rejected. The photo below shows two eggs in the process of being rejected (the pale ones at the edge). 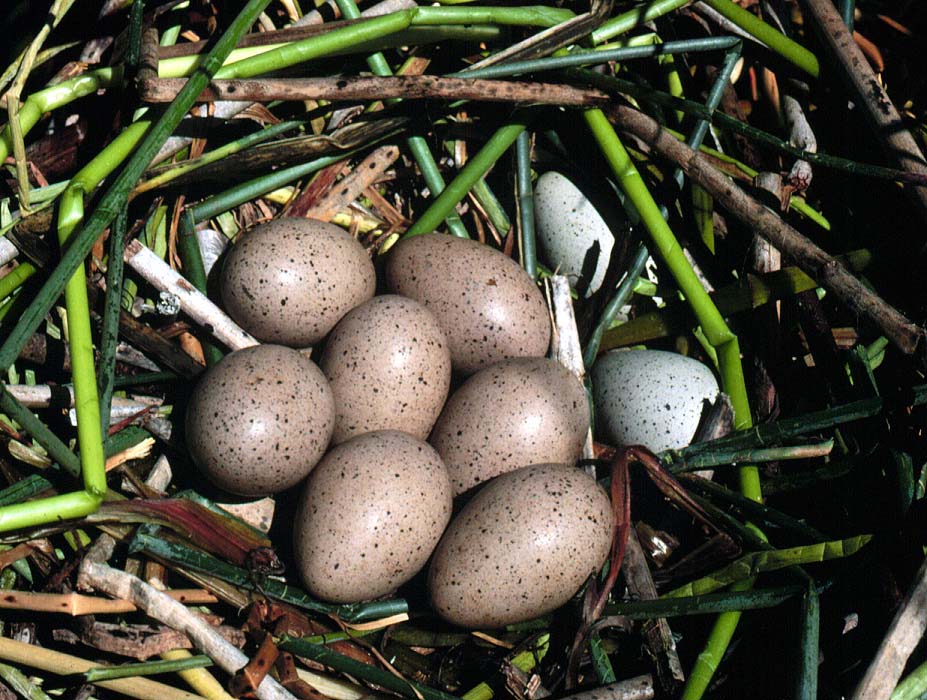 Whether parasite eggs are rejected depends, in part, on how similar they are to the host’s eggs in background color. I suspect that speckling pattern may also be important but I have not yet shown this. Coots also know what their own eggs look like and are not just using the simple rule of getting rid of the rare egg type that differs from the majority. When I swapped eggs among nests to make the host’s own eggs the rare type in their nest, they were not fooled and still knew their own eggs.

Within-species brood parasitism has been observed in quite a diversity of birds; I show a couple of examples below.

Below: Parasitism is common cliff swallows (Petrochelidon pyrrhonota), a colonial nesting songbird. Remarkably, a parasite swallow sometimes lays a parasitic egg in her own nest and then transfers it to a host nest in its beak! (study by Charles and Mary Brown). In the photo below (not far from my house) I wondered if the bird in flight was a brood parasite. It kept entering different nests and getting chased away by the nest owners. 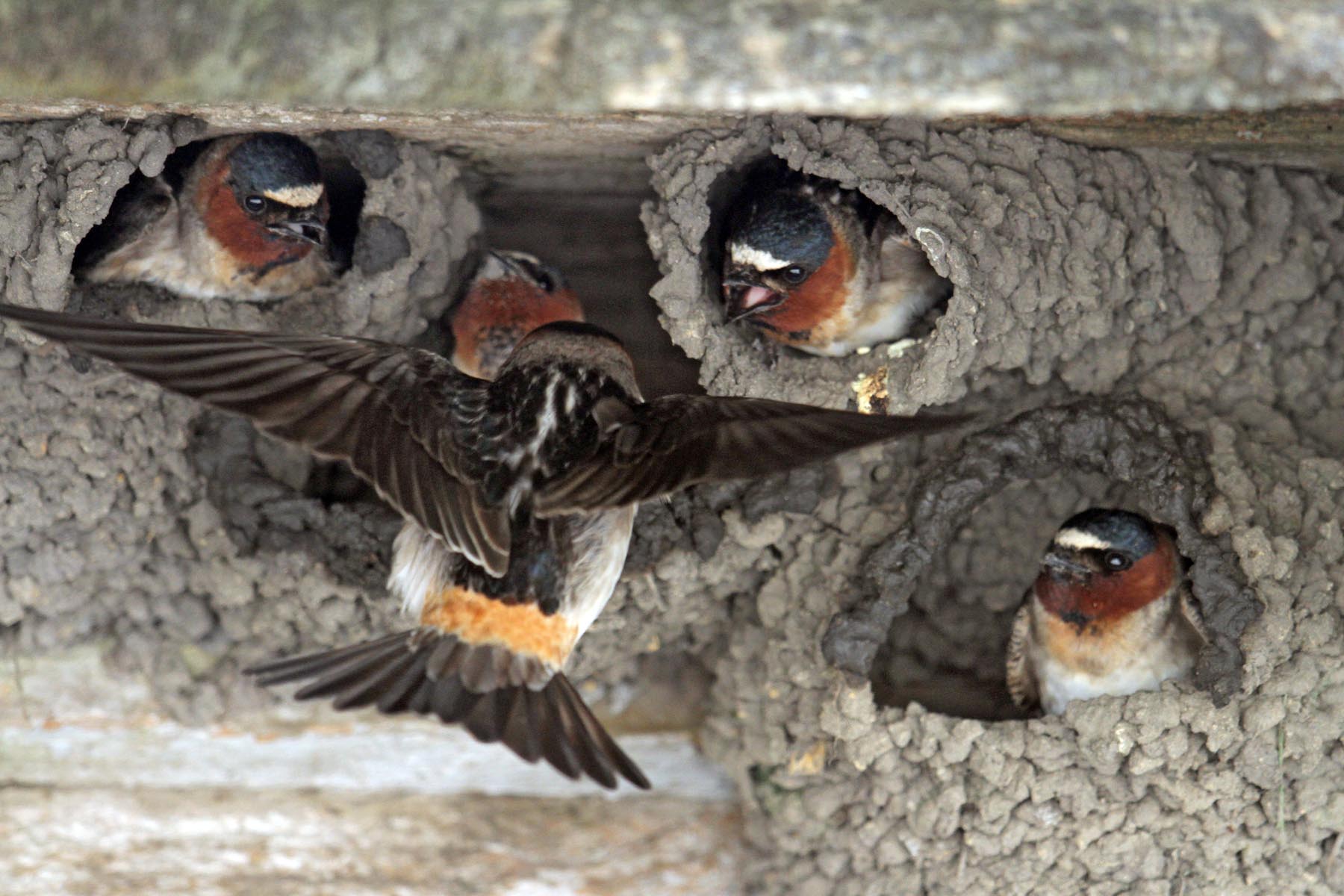 Below: Brood parasitism is very common in waterfowl, including these Barrow’s goldeneyes (Bucephala islandica) at my BC site. In ducks, unlike most other birds, females return to their birth site. This can lead to cases where hosts and parasites are related, and some have suggested that kin selection may play a role in favoring brood parasitism in some species. This aspect has been studied in some detail in goldeneyes. 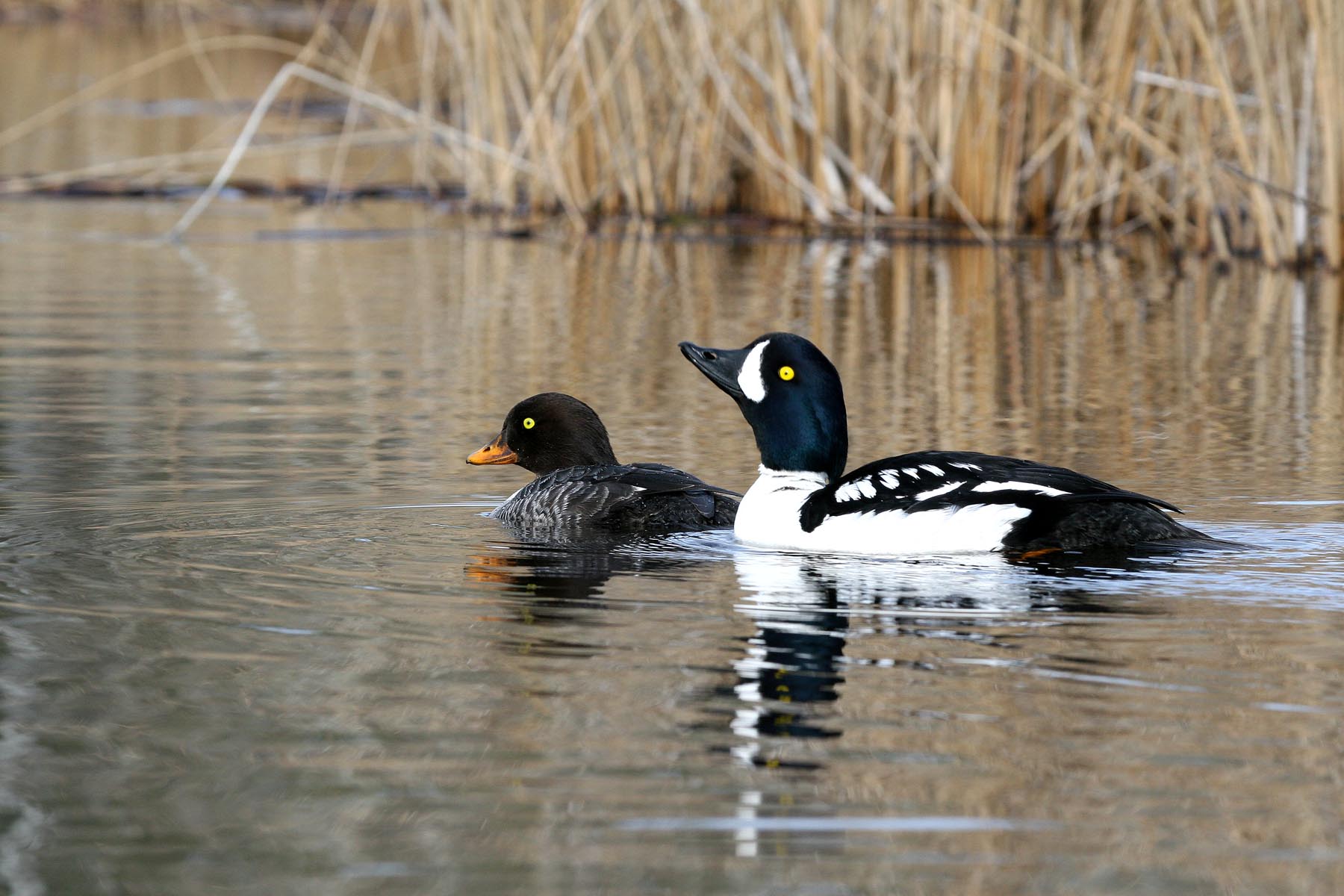 Below: Parasitism has also been particularly well studied in the common moorhen (Gallinula chloropus) a relative of the coots in Europe. I never observed coots in the act of parasitism but Sue McRae captured several brood parasitism events by moorhens on video camera. To lay an egg, the parasite female climbs onto the nest, usually occupied by the sitting host male, sidles up beside the male and squeezes out an egg, all while the male pecks her continuously. 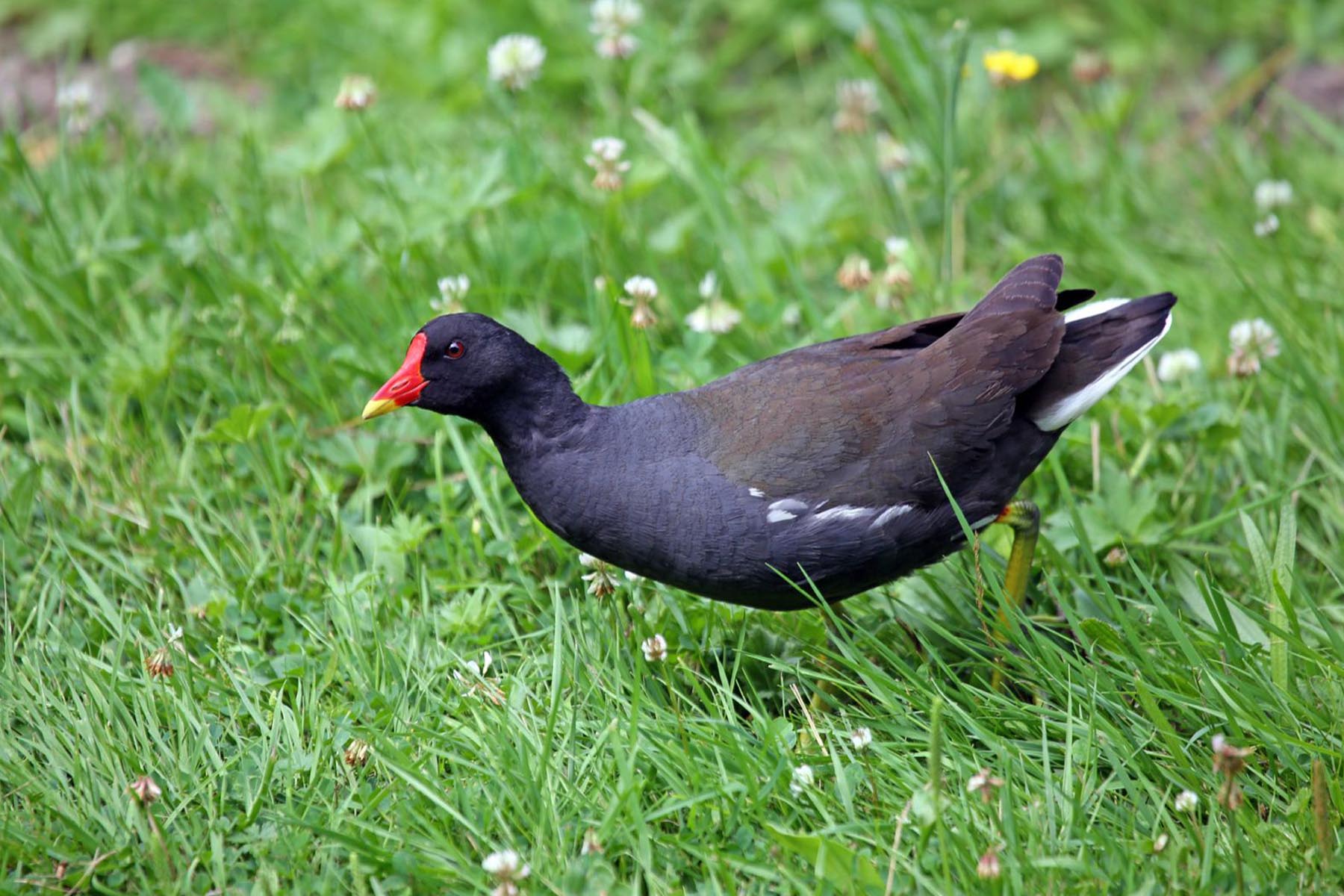