Bad weather has forced the postponement of today’s manned SpaceX mission until Saturday. The scheduled launch then is at 3:22 Eastern Daylight Time.

Presumably the links that I put up this morning will still work then.

As you surely know, SpaceX is about to launch two “mature” astronauts up to the International Space Station today. The launch was set for earlier this morning, but apparently has been delayed. It’s still a “go” at this writing, though, with the liftoff scheduled for later this afternoon. The NASA broadcast begins in about an hour.

You can get the latest details at Space.com, which at the time of publication are given below. But check back later to be sure, as the weather can be dicey.

The mission, called Demo-2, will launch NASA astronauts Bob Behnken and Doug Hurley into orbit on a Crew Dragon spacecraft atop a Falcon 9 rocket. Liftoff is set for 4:33 p.m. EDT (2033 GMT) from NASA’s Kennedy Space Center in Cape Canaveral, Florida.

One place to watch the show is at the link below (which has a continual “warmup” broadcast), or at the several sites listed at the bottom. Click on this one to watch:

Other places to watch (the first link goes to the NASA site above):

Reader Jon called my attention to a SpaceX launch today at 10 a.m. EST (it was originally scheduled for 9 a.m.), or exactly two hours after this post goes up at 7 a.m. Chicago time. I’ll let Jon give the details and sites where you can watch it (his words are indented):

Today SpaceX will attempt the final, major test before astronauts fly aboard the Crew Dragon spacecraft and Falcon 9 rocket to the International Space Station as part of NASA’s Commercial Crew Program.

For this test, Crew Dragon will intentionally trigger a launch escape at about 1 min. 30 seconds into flight to demonstrate Crew Dragon’s capability to safely separate from the Falcon 9 rocket in the unlikely event of an in-flight emergency.

You can watch live coverage here starting 20 minutes before the six-hour launch window opens at 9:00 a.m. ET. Teams are currently targeting a T-0 of 9:00 a.m. ET, one hour into the six-hour test window. However, the exact launch time will depend on weather conditions at both Cape Canaveral Florida and downrange at the recovery site in the Atlantic. There may be fireworks.

Shortly after separation, the Falcon 9 booster is expected to aerodynamically break up or explode offshore over the Atlantic. Here’s an animation of the inflight abort test. If successful, SpaceX should be certified by NASA to fly astronauts to the International Space Station sometime later this year.

I’ve put the animation below.

There’s a six-hour launch window, and the flight may be scrubbed today. In that case, it’s rescheduled for tomorrow at the same time.

Here’s a live feed of the two astronauts working outside the ISS. As the YouTube video notes:

On Friday, Oct. 18 starting at about 7:50 a.m. EDT, NASA astronauts Christina Koch and Jessica Meir will venture outside the International Space Station for a spacewalk. The duo will exit the station’s Quest airlock in their U.S. spacesuits to replace a power controller that failed over the weekend.

One big step for womankind!

This new video, narrated by former NASA astronaut (and Columbia professor) Mike Massimino, answers a lot of your pressing questions about how astronauts keep clean in space. His answers apply to the Space Shuttle and to the International Space Station, though procedures sometimes differ between them.  Here are some of the important issues addressed in the video.

How do you shower?
How do you pee and poo? And what happens to the feces and urine?
Can you shave in space?
How do you wash your hair or brush your teeth?
Can you wear contact lenses?
How can you do laundry?
What if you have to go to the bathroom during a space walk?
And does it get stinky up there? (Answer: yes indeed!)

In the end, Massimino speculates about future hygiene problems as we travel farther and longer from Earth.

Here’s an almost real-time view of Hurricane Dorian (just an hour from before I posted this) from the International Space Station. The storm, now a Category 5, is battering the hell out of the Bahamas. It looks peaceful from up there, but on the ground the winds are fierce. Here’s part of the YouTube summary of the NASA video:

Cameras outside the International Space Station captured views September 1 of Hurricane Dorian from 260 miles in altitude at 12:16 p.m. Eastern time as it churned over the Atlantic Ocean over the northern Bahamas. The storm, which is moving in a westerly direction with sustained winds of 180 miles an hour, is a dangerous Category 5 hurricane, carrying the strongest winds in recorded history for the northwestern Bahamas.

Reader Jon sent me the link to this NASA video of “Earthrise”, first seen on this day in 1968. I’ll just put up Jon’s comment and the reconstructed video, based on both photos and analyses of where the spacecraft was when Earthrise was seen. In fact, I’m posting this at the exact time when Earthrise began on December 24.

In a video entitled “Earthrise in 4K” NASA recreated the moment when the Apollo 8 astronauts first saw and photographed the Earth rising from behind the Moon on December 24, 1968. They used current photo mosaics and elevation data from the Lunar Reconnaissance Orbiter (LRO) to determine the exact location and orientation of the capsule. “Narrator Andrew Chaikin, author of “A Man on the Moon,” sets the scene for a three-minute visualization of the view from both inside and outside the spacecraft accompanied by the onboard audio of the astronauts.”

As Chaikin points out at the end of the video, this year the International Astronomical Union commemorated the event by renaming a twenty-five mile diameter crater visible in the Earthrise photograph “Anders’ Earthrise.”

This rocket will resupply the International Space Station. Watch NOW! If you missed the launch (successful so far), the booster is going to do the patented Space-X vertical recovery at Cape Canaveral.

Dragon will be filled with more than 5,600 pounds of supplies and payloads, including critical materials to directly support more than 250 science and research investigations that will occur onboard the orbiting laboratory. The Dragon spacecraft that will support the CRS-16 mission previously supported the CRS-10 mission in February 2017.

It looks as if the booster fell into the sea instead of landing neatly and recover-ably, but they cut off the cameras right before that happened. Not fair!

It’s time to watch the InSight probe land–NOW!  A live video from NASA is below. Seven minutes until separation. and about 22 minutes till touchdown! Remember that it takes light (and radio signals) three minutes to get from Mars to Earth, so we won’t know whether the landing is successful until 182 seconds after it occurs (if it does).

. . . so far so good. It’s fricking amazing that our species can take the temperature of another planet.

Reader Jon kindly reminded me this morning (after letting me know last week) that NASA’s InSight “stationary lander”,  launched from Earth on May 5, will—if all goes well—touch down today at about 20:00 UTC (3 p.m. Eastern time in the U.S.). The distance of the journey: over 301 million miles!

The lander is basically a probe that drills down 16 feet to take Mars’s temperature, but it will take 2-3 months to put that probe in place after landing.

Jon added more information and some links; I’ll remind you about 15 minutes before the lander touches down.

Live landing commentary on NASA TV will run from 19:00-20:30 UTC (1-2:30 p.m. CEN). InSight, short for Interior Exploration using Seismic Investigations, Geodesy and Heat Transport, will conduct an in-depth study of the interior of Mars: its crust, mantle, and core.

Here’s a NASA Jet Propulsion Laboratory description of the InSight landing (similar to the Curiosity rover touch down) and an animation of the landing from Lockheed Martin who designed and built InSight. (has a silly ending with Insight “speaking” with an alluring female voice?).

I’ve embedded the video here; the landing is a masterpiece of engineering, but it’s fully automated so that NASA has no control. Those in charge have described the landing process as “seven minutes of terror.”

Matthew Inman at The Oatmeal has a lovely cartoon description of the landing and the probe’s mission; click on the screenshot to go to the comic: 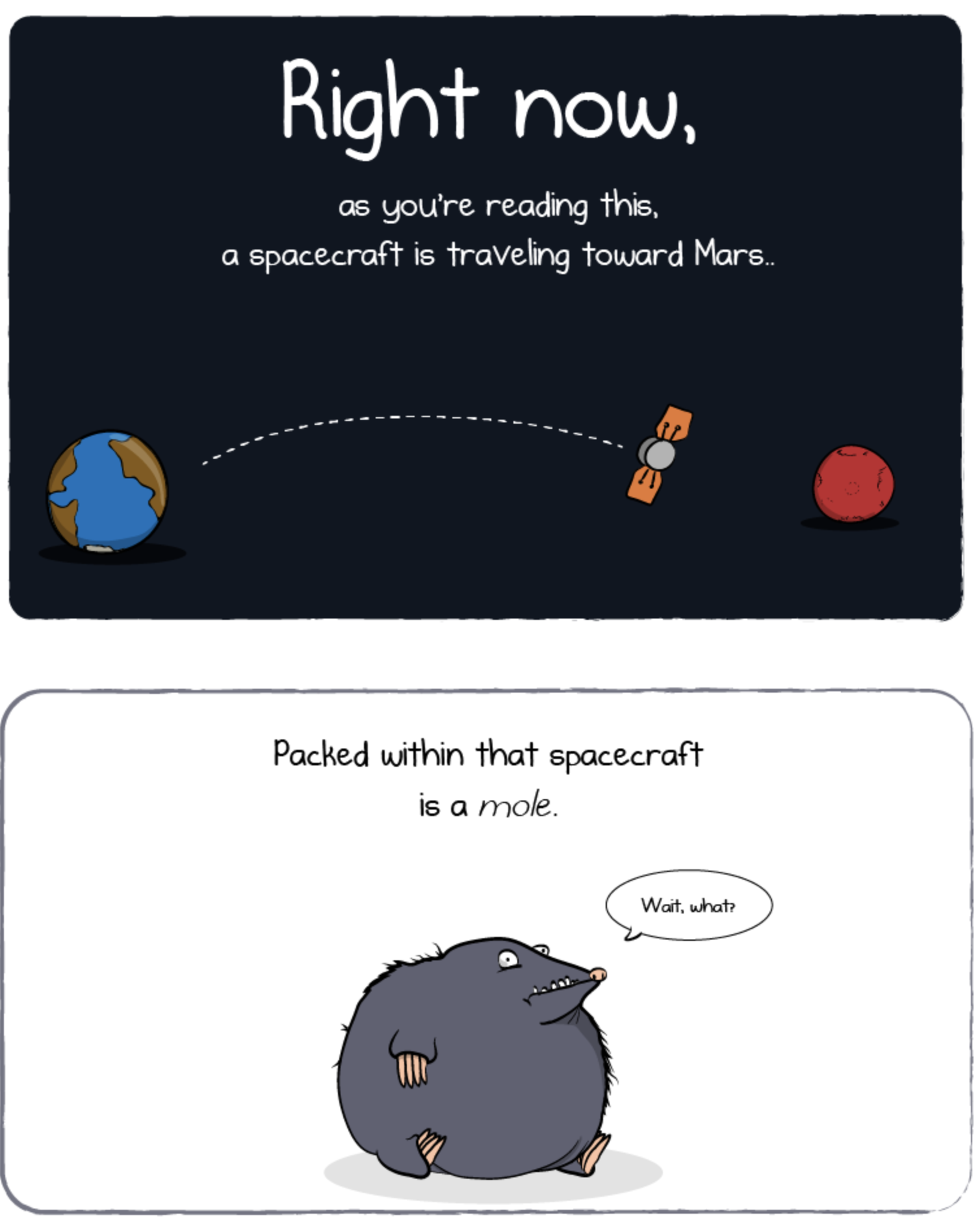 (Unrelated but pretty amazing, European Space Agency astronaut Alexander Gerst made a time-lapse video from the cupola on the ISS of the Russian Progress MS-10 cargo ship as it launched from the Baikonur cosmodrome in Kazakhstan on 16 November.)

Finally, here’s a New York Times article describing what we’ve learned about Mars in the last year (click on article):