This announcement comes from Jim “Bat” Batterson, and if you’re interested in seeing the splashdown, you can start watching below at 11 a.m. Eastern Standard Time.  If you just want to see the final action, I’d suggest starting to watch about half an hour in advance: roughly noon EST.

Here’s a bit of info and some photos of practice rescue using a mock Orion capsule:

Concluding its 25½-day mission, Artemis’ Orion capsule will slow from a dizzying 25,000 mph – roughly a dozen times faster than a rifle bullet – to 300 mph after entering the Earth’s atmosphere. The capsule’s heat shield should reach a roasting 5,000 degrees, or twice the temperature of molten lava.

After a series of parachutes deploy, NASA engineers predict the 11-by-16½-foot capsule should slow to about 20 mph before gliding earthward and striking the sea’s surface within eyesight of the recovery ship’s crew, 50 to 60 nautical miles off the San Diego coast. [According to Bat, bad weather at the site off San Diego has forced the entry 300 nautical miles away—off Mexico.] 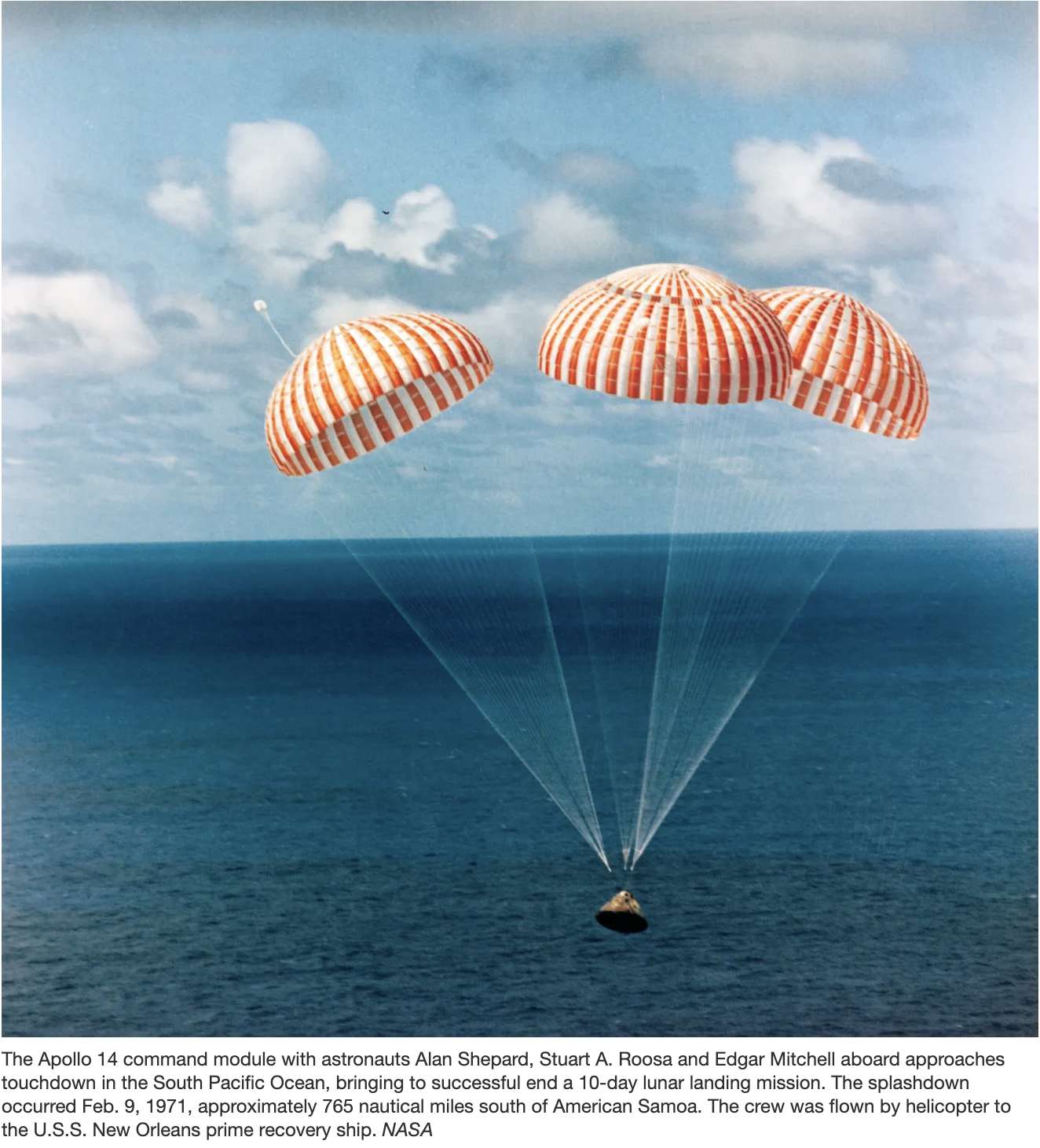 The Portland will approach the bobbing Orion, and divers will use sensors to conduct “sniff checks” for leaking hydrazine or ammonia from the capsule, Jones said. Then Navy personnel will attach tending lines to Orion and flood the ship’s well deck with about 6 feet of seawater, and a cable will tow the floating spacecraft through the ship’s lowered stern gate into a specially designed cradle.

Afterward, the Portland will transport the capsule to a pier at Naval Base San Diego. 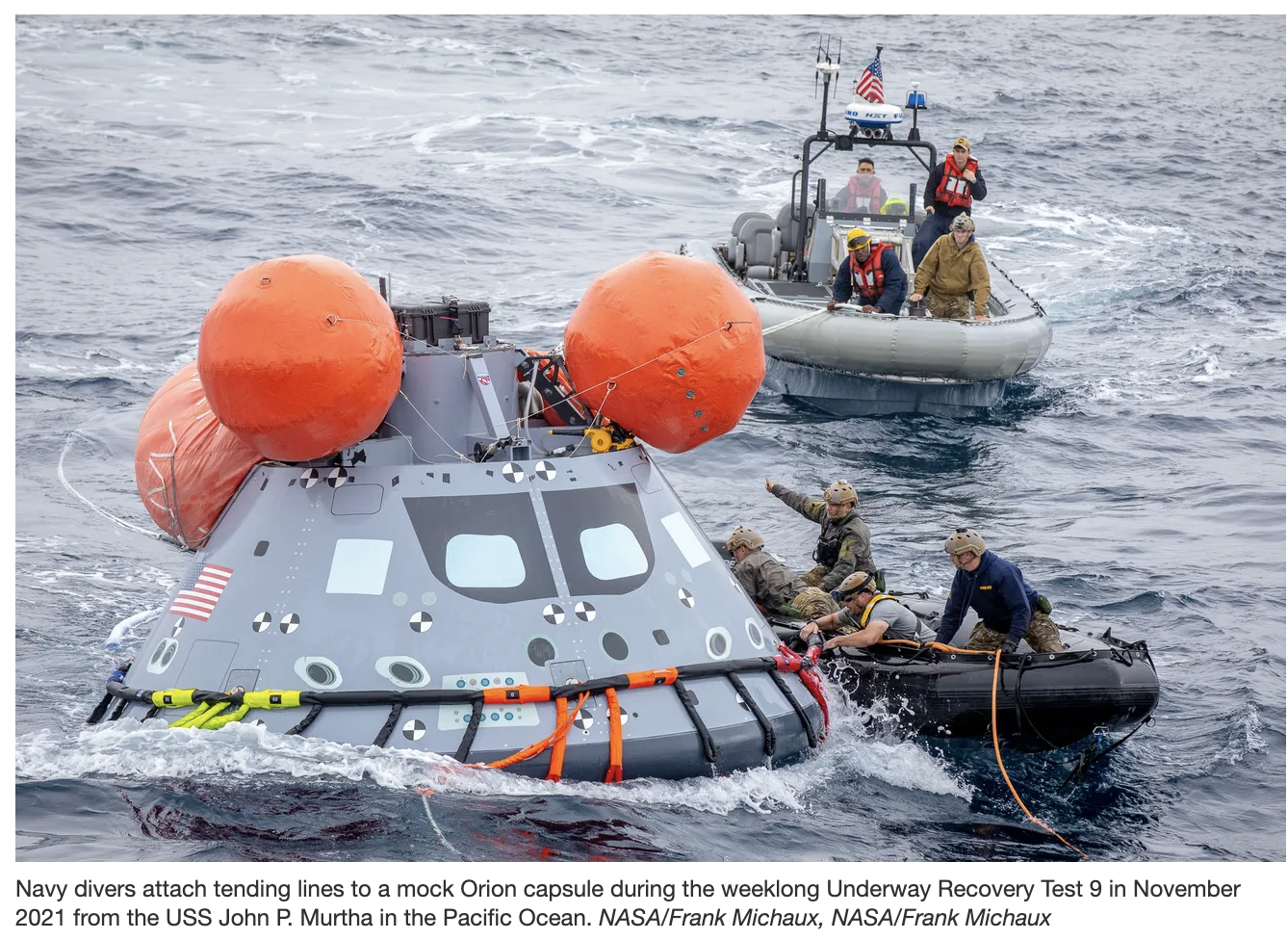 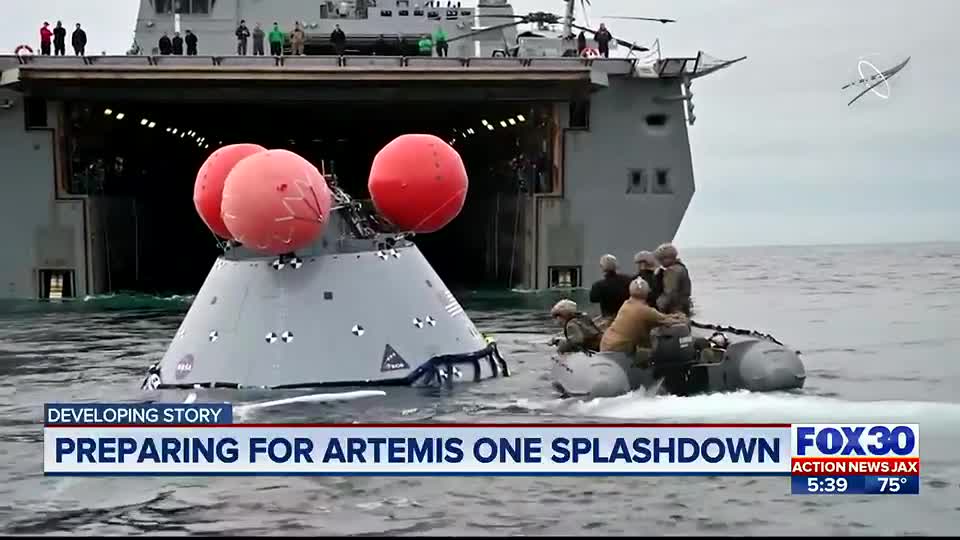 The unique aspect of the re-entry, not previously used, is the “skip” maneuver, in which the capsule will bounce off the Earth’s atmosphere before plunging through it again. This allows the capsule to reduce speed (therefore reducing the heat the capsule experiences) as well as to permit a more precise landing:

After discarding its unneeded service module, which supplied electricity and power for nearly a month, Orion will do a daring skip maneuver off the edge of Earth’s atmosphere. The capsule will use a bit of our protective envelope, along with associated lift, to skip just like a rock across the surface of a lake. This maneuver wasn’t possible during the Apollo program, but advances in spacecraft navigation make that possible today.

“The skip entry will help Orion land closer to the coast of the United States, where recovery crews will be waiting to bring the spacecraft back to land,” Chris Madsen, Orion guidance, navigation and control subsystem manager, said in a NASA statement(opens in new tab).

“When we fly crew in Orion beginning with Artemis 2, landing accuracy will really help make sure we can retrieve the crew quickly and reduces the number of resources we will need to have stationed in the Pacific Ocean to assist in recovery.”

The maneuver will also reduce the g-forces future Artemis program astronauts will experience once the Orion capsule is crewed. “Instead of a single event of high acceleration, there will be two events of a lower acceleration of about four g’s each,” NASA wrote in the same statement. “The skip entry will reduce the acceleration load for the astronauts so they have a safer, smoother ride.”

Here’s a diagram of a “skip” re-entry from Wikipedia: