The quote below is one of the sanest things I’ve seen on Facebook lately, though I can’t remember who posted it. Dag Søras is a Norwegian comedian: 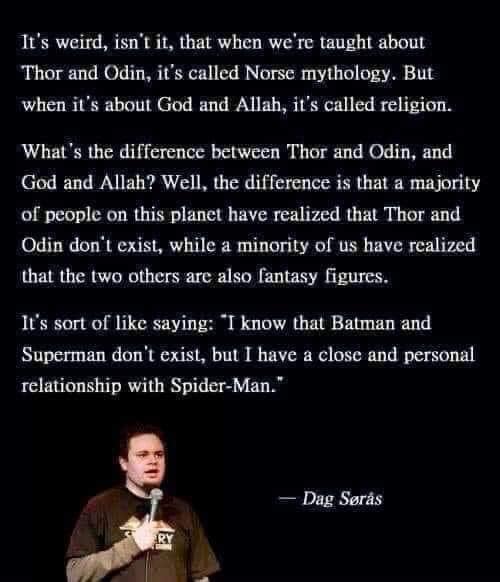 Why I bring this up is because every Sunday, like today, the New York Times pretends that God and Jesus exist, and they do so by giving op-ed space to Anglican priest Tish Harrison Warren. Every week Warren produces a page of bromides (usually along the lines of “why can’t we all love each other, even if we’re different?), all of which take for granted that her Christian beliefs are correct.

This week Reverend Warren interviews another Anglican priest who happens to be a poet, Malcolm Guite, described by Wikipedia this way:

. . . an English poet, singer-songwriter, Anglican priest, and academic. Born in Nigeria to British expatriate parents, Guite earned degrees from Cambridge and Durham universities. His research interests include the intersection of religion and the arts, and the examination of the works of J. R. R. Tolkien, C. S. Lewis, Owen Barfield, and British poets such as Samuel Taylor Coleridge. He was a Bye-Fellow and chaplain of Girton College, Cambridge and associate chaplain of St Edward King and Martyr in Cambridge. On several occasions, he has taught as visiting faculty at several colleges and universities in England and North America.

It always puzzles me when somebody with brains and academic training is also deeply religious, and I’ve started seeing that as a character flaw: an inability to accept that you’re staking your life and much of your time on stuff for which there’s no evidence. That is, you’re believing in the modern equivalent of Thor and Allah. In this column—and I’ll try to be brief—we have one Anglican priest (Warren) interviewing another (Guite), and together they manage to fob off a bunch of hooey on the readers of the NYT.

The subject is both poetry and Advent: the month of preparation for celebrating the birth of a baby who may or may not have existed, but is thought, wrongly, to be both God and the Son of God.  Guite explains its significance. In all that follows I’ve put the hooey in bold except for Warren’s questions, which the NYT put in bold.  Excerpts are indented.

I think the first thing to understand is the wisdom that is embedded in the liturgical calendar and that way of sacralizing time. Advent is meant to be to Christmas what Lent is to Easter. It’s always been the wisdom of the church to have a fast before a feast, to have this time of holding back and restraint so that you really appreciate and understand the reasons for the joy and the feasting when it comes.

The word Advent means “arrival” or “coming.” The church saw that preparing for the coming of Christ at Christmas could also be a way of looking to that larger hope, which is the final coming of Jesus, the day when, at last, the earth will be filled with the glory of God. And in my book I said, well, I think there’s a third “coming,” a kind of continuous coming. We all experience a series of Advents. My prayer life and spirituality is very much focused on the Eucharist. So for me, every time I hold out my hands and the wafer is placed there and I receive him, that’s an advent. And in fact, that’s actually also Christmas. It’s an incarnation. He chooses the humble form of the bread as he chose the humble form of the baby to be his body.

Guite bangs on about the commercialization of Christmas and how we really have to avoid pre-Christmas parties and shopping, for it’s a time to reflect on the coming of baby Jesus.

Instead of being quieter and more reflective, then finally experiencing what G.K. Chesterton called the “submerged sunrise of wonder” at the birth of the Christ Child, we were suddenly assailed on all sides by commercial pressures.

There’s a tedious discussion of antiphons, but then Guite gets onto my territory: “ways of knowing”. And religion is one of them.

WARREN: You have said that imagination is “a truth-bearing faculty.” What do you mean by that?

GUITE: There’s a hierarchy between information, knowledge and wisdom. And reason is very good at finding and categorizing information. But reason has almost no access to wisdom at all. Counter to that are much earlier insights probably best expressed by Shakespeare in “A Midsummer Night’s Dream.” He says: “The poet’s eye, in a fine frenzy rolling, doth glance from heaven to Earth, from Earth to heaven; And as imagination bodies forth the forms of things unknown, the poet’s pen turns them to shapes, and gives to airy nothing a local habitation and a name.”

That suggests that imagination is a way of knowing. And it’s a way of knowing and intuiting and feeling we might have missed entirely if the poet or the artist or the painter or the musician hadn’t bodied it forth.

Imagination came to be considered, strictly speaking, made up. The presupposition was that all the things that we care about that have now been relegated to so-called subjectivity, like love and passion and beauty, somehow don’t exist in the same way that the atoms in a cup exist.

The first quote from Shakespeare sounds good, but really proves nothing. All it says is that when a poet imagines something, it somehow becomes “knowledge.”  Well, knowledge only in the sense that Shakespeare—or any poet—made stuff up.  Note how Guite conflates imagination and knowledge to somehow prove that what we can imagine to be true really is true. If that is the case, then when Guite and Warren imagine that Baby Jesus was born as God in human form, and performed many miracles before he was died and resurrected (he’ll be back!), why is that “knowledge”, while those who imagine that Allah, or John Frum, or Zeus, or Thor, or Shiva are real gods are wrong? When different people believe in different divinities, who, if anyone, is right?

There’s no way of knowing, and that’s why we have to choose between science and religion. Science has a way of distinguishing between competing explanations, although sometimes it’s hard to do (e.g. is string theory right?), but religion has no way of knowing whether its “knowledge” is real, genuine, true knowledge. (I’m taking “knowledge” to mean “truth that is nearly universally accepted” by those qualified to judge, but don’t hold me to a definition I made up on the fly.)

I won’t reprise Faith Versus Fact: Why Science and Religion are Incompatible; let’s just say that Guite needs to read that book. Religion is not “enfolded” in science, nor is faith a “primal way of knowing” (note the word “primal”, which serves only to sound good but doesn’t move Guite’s argument forward).

That’s about it. One more exchange in which, I think, Warren is turning into the Anglican Krista Tippett:

WARREN: There is something about truth that is paradoxical. And poets — in a way that I don’t see with theologians or scientists sometimes — are very comfortable in that tension. Can you talk about the paradox of Advent?

GUITE: Advent is paradoxical in itself. It’s a season of waiting and anticipation in which the waiting is strangely rich and fulfilling. And it’s a season that looks back to the first coming, but only in order to look now at the other comings and also forward at the last coming.

What, exactly, is paradoxical about truth? Given that Advent is celebrating something that we don’t think really happened, is she referring to the “tension” of a celebrating something thatis likely a fiction? I don’t think so. The only truths I know that are paradoxical are the provisional truths of quantum mechanics, since they defy our ability to imagine what’s happening to particles on the physical level.

But enough. I am starting to wonder if the NYT continues to publish the numinous lucubrations of Pastor Warren because the paper in fact supports them—or at least supports the view, often pushed by The New Yorker, that science is only one of several “ways of knowing.” (As evidenced by my dialogue with Adam Gopnik, and other articles, the NYer apparently thinks that literature is also a “way of knowing”.) Since the sophisticated readers of the New York Times want to have their science and also their faith, this kind of twaddle with Guite and Warren buttresses the readers in their dissonance.

28 thoughts on “More fiction and superstition fed to NYT readers”