In lieu of readers’ wildlife today (the tank is quite low), and because we pay attention to space exploration, take note that the rescheduled Artemis-1 mission is scheduled for this afternoon.  That doesn’t mean it will take off, but it means they’ll try.

My friend James “Bat” Batterson, a now-retired physicist who worked for NASA, has patiently answered my inquiries about the Artemis mission, the mechanics of rockets, and so on. So I asked him to write a bit about the launch, which is below. You can watch it from the NASA site, though I prefer Space.com, which you can watch right here.  Tune in about 2 pm Eastern time.

After reviewing sensor data and a full physical inspection of the Artemis-1 Space Launch System (SLS) rocket and components, NASA has rescheduled this past Monday’s canceled test flight. The new proposed launch of of this un-crewed vehicle occupies a two-hour window that begins at 2:17 EDT this afternoon.

In a nutshell, after looking at redundant data from other sensors and their experience base, the managers believe that a temperature-sensor reading —one that told them that one of the rocket engines had not cooled to a proper temperature of approximately -420F for launch (it was reading -370F)—was wrong.  They’ve also fixed a coupling that leaked on Monday and decided that an insulation crack on the main cryogenic fuel tank did not pose a danger.

Followers of the Shuttle program may recall that a piece of foam insulation that tore loose from Shuttle Columbia’s fuel tank on launch and impacted the Shuttle wing causing a large hole that allowed hot gas into the wing during re-entry into the Earth’s atmosphere a week later. That, of course, led to destruction of Columbia and the loss of all astronauts onboard.  The SLS is a safer design with the crew module configured above the tank.

While not as tall as the Saturn-5 that powered Apollo astronauts to the Moon, this rocket is more powerful, allowing for a significantly heavier payload to be delivered into lunar orbit.  Its main stage propulsion system uses four RS-25 Space Shuttle engines (the shuttle used three), in tandem with two solid rocket booster engines. Together these provide over eight million pounds of thrust.  The solid boosters last for two minutes before being jettisoned. As with the shuttles, the boosters then fall into the Atlantic. The four RS-25’s burn for eight minutes, putting the payload into a 17,500mph low-Earth orbit.

Later, a second-stage rocket burn will accelerate the payload to more than 22,000 mph to send it into a lunar trajectory, a trip that takes several days.  [The orbiting of the Moon begins September 8, with the module coming back to Earth on October 11.]  CBS News has an excellent write-up here. If you want to know more about the mission details and the ultimate goal of getting people to live on the Moon, go to the Astronomy article here.

And an important note:

This is an engineering test flight, not a demonstration flight. They have tested all the parts in isolation and in partial configurations, but this is a test of the whole system designed to carry out a mission to the Moon and back, ending with a safe splashdown. As I emphasized last week, a whole lot of things need to go extraordinarily right, and those that don’t have been designed in what is known as a “fail/operate” mode* so that the entire vehicle and thus the mission does not fail.

Here’s the best place to watch it: the NASA live site at space.com:

* “Fail/safe” refers to the eponymous book and movie on nuclear war.  It refers to a design that, if the booster rocket were to fail, the crew would be rocketed away in their own capsule and splash down safely.  The space shuttles obviously were not designed that way, but the space launch system is.

Here’s a diagram of the planned itinerary (from the Astronomy article), with the outbound leg in green and the return leg in blue. Click to enlarge: 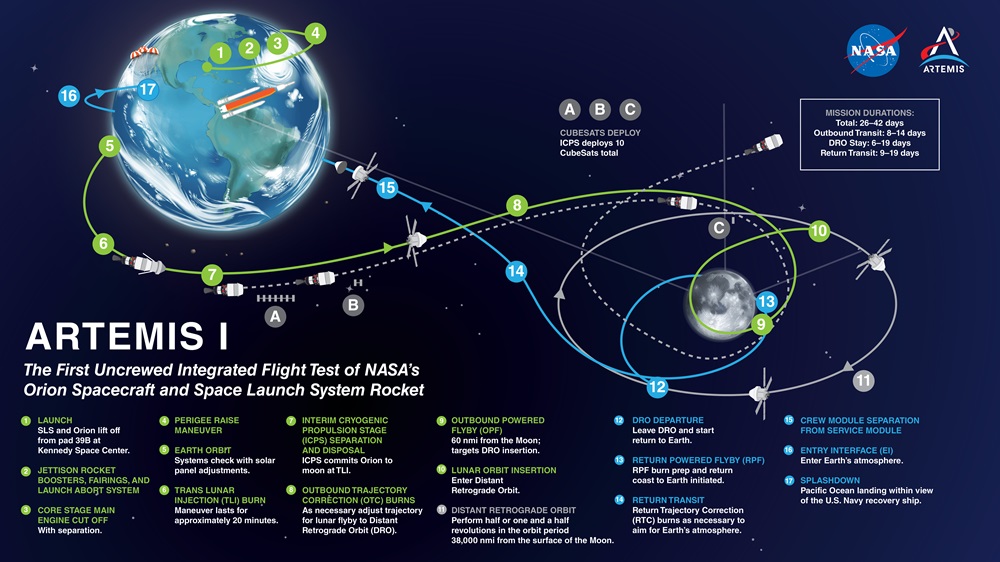