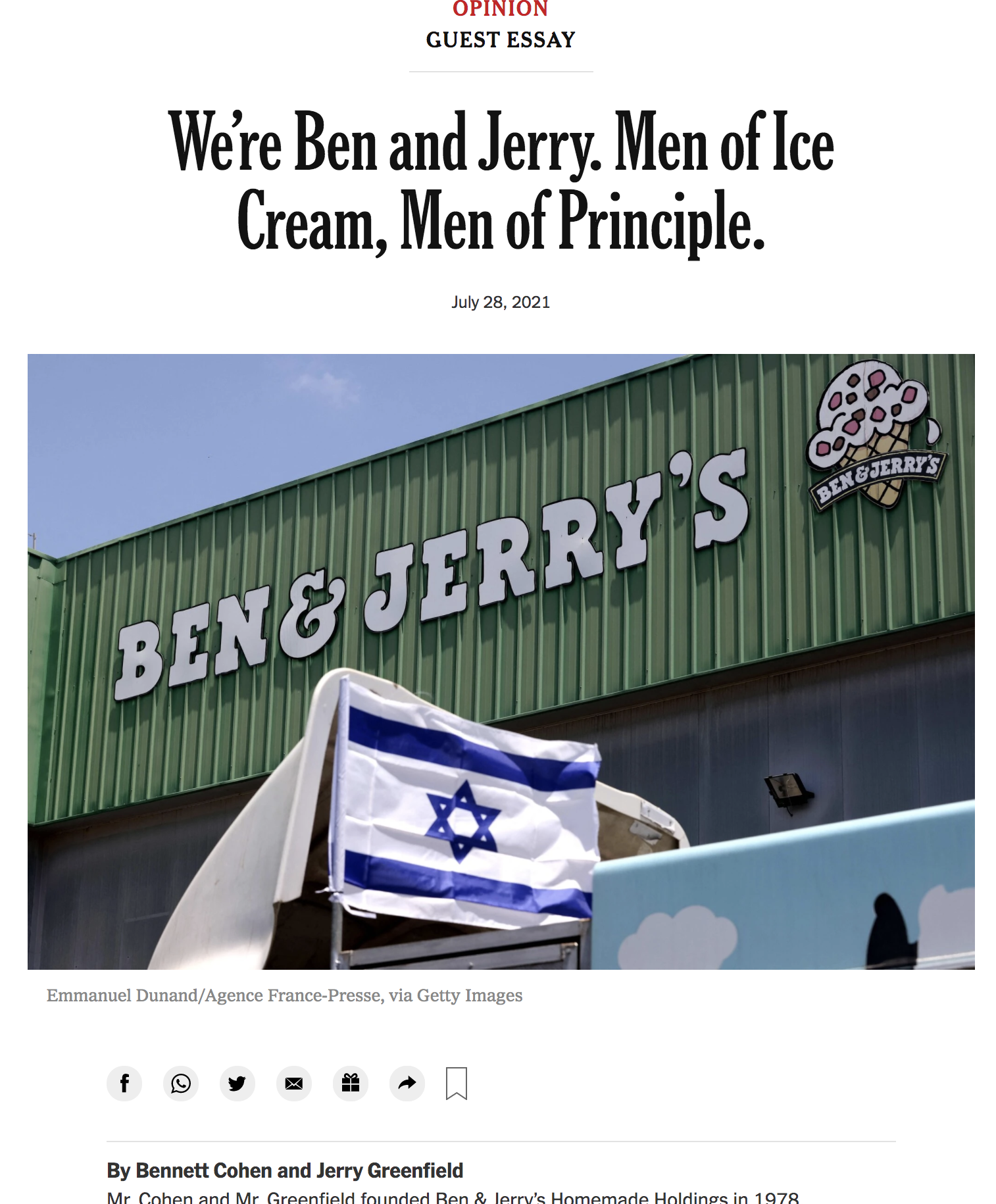 The first headline below (h/t: cesar) appeared in the National Review. Don’t like the site or trust it because it’s a conservative website? Well, do you think you’d see this in the mainstream of Leftist media? Actually, the New York Times has a very small article on it, which at least notes that “Homosexuality is taboo in Arab countries, many of which criminalize it.”

But don’t worry—there’s more! (Click on screenshots to read the articles).

How about Haaretz, a left-wing Israeli paper often critical of the Israeli government?:

From the left-leaning Times of Israel: 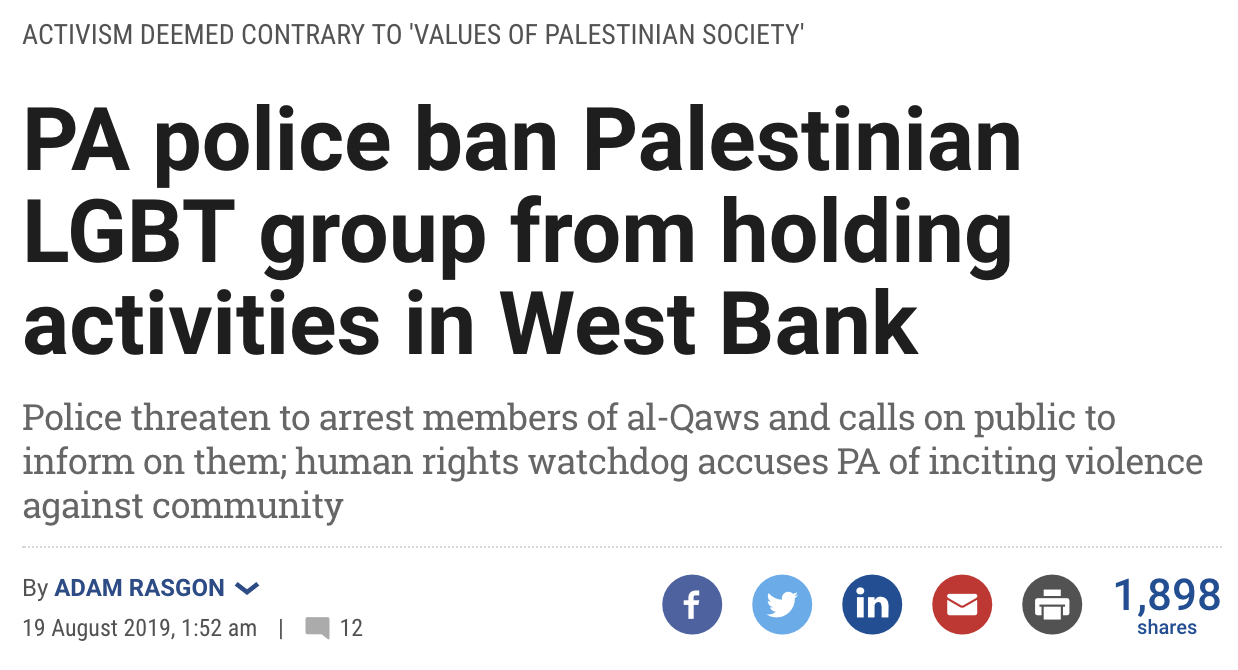 Or how about PinkNews, a pro-gay website in the UK? (It’s woke, and even accuses Israel of “pinkwashing“.)

Here’s part of the story from Haaretz:

Palestinian Authority police targeted the Palestinian LGBTQ community last week, calling on citizens to report “suspicious” activity and vowing to break off community events, even though same-sex relations are not illegal in the West Bank.

The statement the Palestinian police released specifically targeted the al-Qaws organization for Sexual and Gender Diversity in Palestinian Society, after it announced it will hold a “queer camp” at the end of August near the West Bank city of Nablus. According to the organization, the event was to provide an opportunity for young Palestinians to discuss their sexuality and experiences.

The police spokesman said such an event hurts the values of Palestinian society and is organized by “suspicious figures attempting to provoke and harm the Palestinian social fabric.” The spokesman added that the police will pursue the organizers, although it does not have concrete information regarding the place of the event.

. . . Al-Qaws claims that the backlash is a “direct response to the dismantling of societal denial regarding the existence of LGBTQ Palestinians.” Last month, the organization held a demonstration in Haifa, following the attempted murder of a gay teen from Tamra by his brother.

Note that the demonstration was in Israel, not in the Palestinian Territories. It would have been suicidal to demonstrate anywhere where Hamas or the PA has control.  From PinkNews:

The gathering, which was supposed to be held in Nablus, a city in the northern West Bank, was a “queer camp”.

According to the Times of Israel, it would’ve provided “a place for gay, lesbian, bisexual and transgender youth from Palestine to meet, learn about the basic concepts of gender pluralism and explore the different sides of our human sexuality”.

Al-Qaws operates in the West Bank and among Arab-Israelis. It was founded in 2001 with a stated goal of “fighting for vibrant Palestinian cultural and social change, building LGBTQ communities and promoting new ideas about the role of gender and sexual diversity in political activism, civil society institutions, media, and everyday life”.

The PA also said it is investigating those involved in organising with Al-Qaws and will arrest those who are caught violating the law.

It urged Palestinians to report to the police any violation of the law they witness.

As for the Arab stabbed for being gay? Here’s from the Jewish Press on July 28:

An Arab man who stabbed and severely wounded his homosexual teenage brother on Friday afternoon outside an LGBT youth hostel in Tel Aviv is still at large and the police are still searching for him.

The attacker stabbed the 16-year-old boy in the chest and legs and fled the scene, in an apparent attempt at a family honor killing. The victim told the paramedics that the attacker was his brother

The stabbing took place outside of the Beit Dror center, where the victim was living. The center is a temporary shelter providing home conditions for LGBT members who are endangered in their homes.

Paramedics rushed the victim to Ichilov hospital in serious condition, where he underwent surgery that stabilized his condition.

The victim is from the Arab town of Tamra and has been under attack by his family for being gay. The conservative Arab society often does not accept gay people and often hounds them.

You should have gotten my point already, if you haven’t grasped it before. First, homosexuality is demonized and punished in Palestine, and gay organizing or being openly gay subjects you to to arrest or even honor killing by your family—killing that can even target Israeli Arabs.  This, of course, is part of the general Muslim sentiment that homosexual behavior is immoral (in most Muslim-majority countries surveyed by Pew, more than 80% of people surveyed say homosexuality is “morally wrong”). Further, it is the Palestinian Authority, which rules the Arab West Bank, that is cracking down, and they’re seen as a more liberal and tolerant organization than Hamas, which runs Gaza.

I won’t belabor the hypocrisy of saying that Israel is an “apartheid state” when gays aren’t demonized there, but celebrated, while giving Palestine a pass despite its execrable treatment of both gays and women. (Israeli treatment of women, of course, is far more enlightened than in Palestine). As Amnesty International’s 2018 report on Palestine reports:

Women in both the West Bank and Gaza faced discrimination and violence. Courts in Gaza continued to hand down death sentences. Lesbian, gay, bisexual, transgender and intersex (LGBTI) people were subjected to arbitrary arrest and ill-treatment.

If Israel did this (they’ve imposed capital punishment exactly once since the state was founded: on Adolf Eichmann), it would make headlines in the New York Times, the Washington Post, New York Magazine, and, of course HuffPost. But when Palestine practices “apartheid” against gays and women, well, as they say, “crickets”.

It would be nice to see an article by a paper like the NYT about how the mainstream press has a policy of demonizing Israel while promoting Palestine, but it will be a cold day in July when that happens. Such an article has, however, been written. It’s by Matti Friedman, a former correspondent for the Associated Press, it’s in Tablet, and it would behoove you to read it (click on the screenshot).

Perhaps someone should ask Rashida Tlaib and Ilhan Omar to compare and contrast the treatment of LGBTQ people in Palestine versus Israel.

UPDATE: I’ve been informed that Omar has in fact tweeted twice about this. In the first one, she simply ignores the LGBTQ issue and brings up Israel’s transgressions again:

Pretending that this act somehow balances or mitigates Israel violating the dignity & rights of Palestinians – or undermines case for defending Palestinian rights – is deplorable! https://t.co/ISzkNXT3eL

In the second, she says that suppressing LGBTQ organizing activity is an infringement of human rights, but doesn’t condemn Palestine, even though she’s already condemned Israel.

Omar is a master of this kind of doublespeak: pretending to criticize actions of Muslims or of Palestine while at the same time managing to double down on Israel. This is exactly how she acted when the anti-Semitic resolution of the House came up. Why are people taken in by this?