I’ve written before about the Palestinian Territory’s policy of “Pay for Slay”, one of the most odious policies I know of. The program consists of the Palestinian Authority giving generous payments (often for a lifetime) to those Palestinians who get caught committing terrorism against Israel and are either killed or put in Israeli prisons. (They often justify it as reward for fighting the enemy, but the “enemy” often consists of Israeli citizens, including women and children.

If a Palestinian kills or injures an Israeli in an act of terrorism, or simply commits a non-murderous act like terrorist arson, he or she get a comfortable wage, and, if you get out of prison, a good job and other benefits in Palestine. (The amount you get goes up with the heinous nature of the crime; murder is the most compensated act.)

This is, of course, financing and encouraging terrorism, including the murder of many Israeli civilians. One of those civilians is highlighted in the article below: Dafna Meir, a nurse and a premarital counselor, who had four children and two foster children. For no reason beyond her being Israeli, she was stabbed to death by a 15 year old Palestinian terrorist in 2016, who was jailed in a children’s facility (now transferred to an adult prison). That adolescent, a killer, is now 20, and his monthly wage is $401 for life, along with a one-time “martyr” payment of $1719.  In a few years he’ll be making more than the average Palestinian citizen.

It’s even worse, for many countries, including much of the European Union, finances this “pay for slay” program by giving aid money directly to Palestine. A few countries (including Australia, Norway, and the U.S.) have cut down their contributions to Palestine because of this program, but much of the EU simply gives aid to Palestine that can be used to pay terrorist’s “martyr pensions”. Those pensions constitute  about 7% of the total Palestinian budget: or about $355 million per year (in 2017).

It is unconscionable that Europe finances terrorism this way, and doesn’t seem overly concerned with how the money is used. They could, as the U.S. did during the Trump administration—the Obama administration, unfortunately, helped underwrite Pay for Slay by giving direct aid to Palestine on the order of $300-400 million per year—cut back on the amount of money they give to Palestine, and ensure that all that aid money is used for constructive projects, not terrorism. This is what the U.S. does now, and I hope Biden doesn’t reverse that policy.

Even so, the money that the U.S. gives to Palestine to, say, build schools, still frees up money that the Palestinian government might have used for such projects, making more money available for Pay for Slay.

I emphasize again how immoral it is to finance terrorists to kill civilians like Dafna Meir. This is most likely a war crime.

Click to read the story, and realize that if you’re in a country that gives unrestricted aid to Palestine, your government is underwriting this kind of murder. 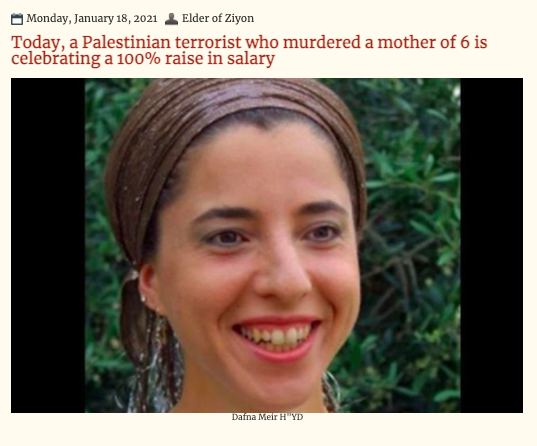 Below is a graphs showing how much money you get as an incarcerated Palestinian for committing acts of terrorism against Israel (“regular” crimes like robbery are not rewarded). If you’re killed during your terrorist act, your family gets paid, too.

I’m not sure why terrorists who are Jerusalem and Israeli residents get a bonus, but it’s amazing that Israel allows its own citizens to collect “pay for slay” money. You get the salary for life, even if released, if you serve at least five years in prison as a man or two as a woman. And you don’t have to kill Israelis, either. You can get the dosh if you commit terrorist attacks on anybody visiting Israel, including Americans like U.S. Army veteran Taylor Force, stabbed to death at age 28 by a terrorist while Force was on a visit. Also killed, with their murders getting Palestinian payments, are citizens of the UK, France, the Netherlands, Australia, and Russia.

Here’s what you get if you’re jailed for terrorism. Note the supplements if you have a wife and child (70% of those convicted, though, are single). You can even receive the money in prison, put in a bank account, or have it given to your family. 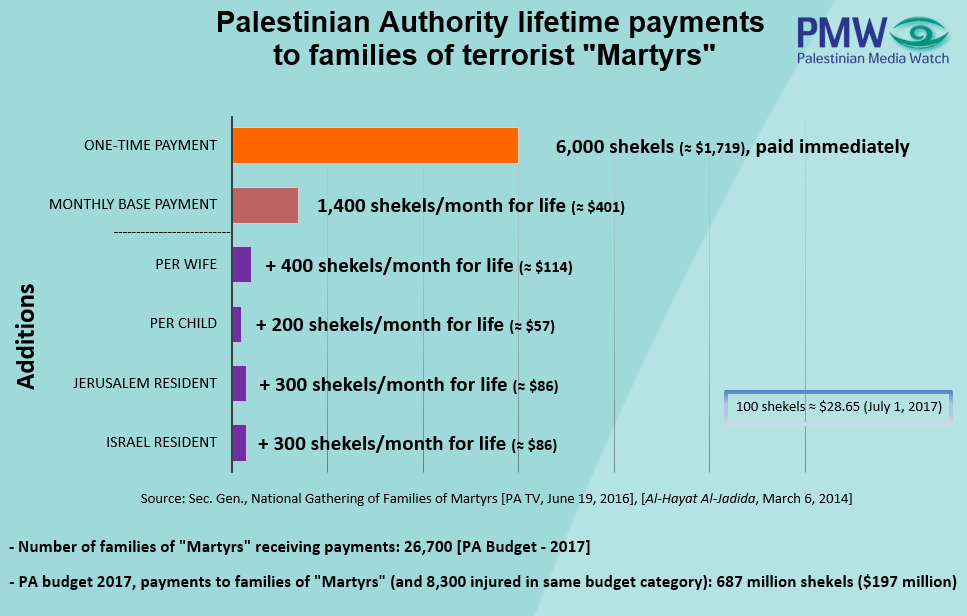 As the graph below shows, the amount you get above the “base payment” increases with time served. The killer of Dafna Meir, having passed his five-year stint, now has his stipend doubled and also gets his stipend for life.  The average salary of a Palestinian worker is $765 a month, or $9180 per year, so after you’re in prison for five years, besides getting free room and board, you’re making more than your average Palestinian. And that doesn’t include the one-time payments or supplements for children and wives. The payments are also higher the more odious the crime. 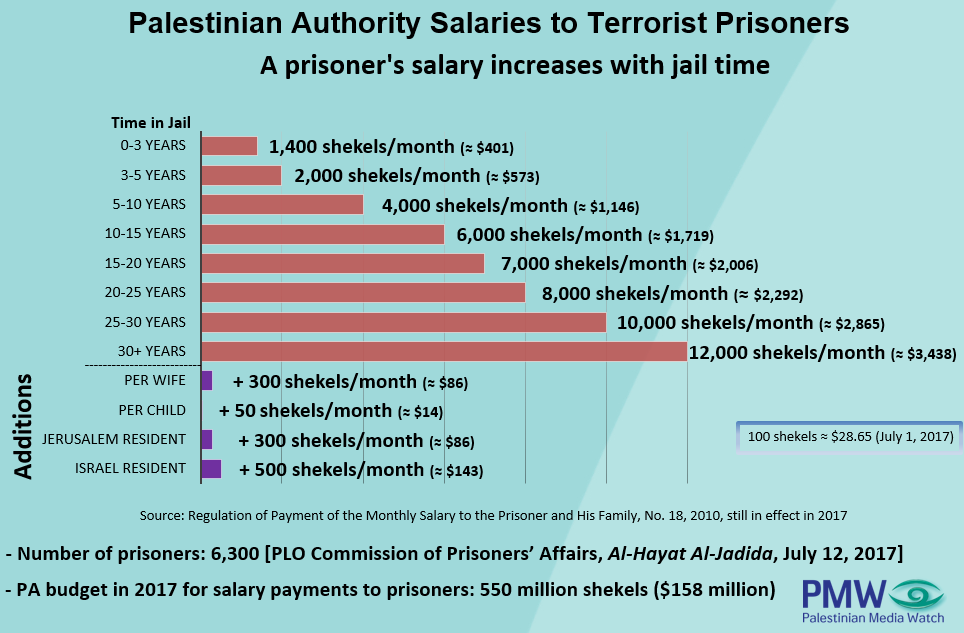 Finally, as I noted, released terrorists are given priority for employment. As one source reports:

Once released, prisoners are given priority for employment. Any male ex-prisoner incarcerated for 10 or more years, and female who served five years, is entitled to a position in the PA [Palestinian Authority]. All former prisoners’ social security and pension fees are paid according to the number of years they spent in jail. If their salary is lower than what they received in prison, the PA makes up the difference and, if a prisoner cannot be employed, they are still entitled to a monthly salary, disability payments and death benefits payable to their families (Douglas J. Feith & Sander Gerber, “The Department of Pay-for-Slay,” Commentary, March 15, 2017; Thane Rosenbaum, “Palestinians are rewarding terrorists. The U.S. should stop enabling them,” Washington Post, April 30, 2017).

According to the Director of the ‎Commission of Prisoners and Released Prisoners’ Affairs, Qadri Abu Bakr, a prisoner can receive a prisoner’s ‎salary after their release and do nothing. He said, “We have 7,000-8,000 ‎released prisoners who are receiving a salary like this.”‎

Though idle, they still qualify for benefits. ‎“Every prisoner who is released after a year is eligible to study at university ‎and also carpentry, metalworking, and the like,” said Abu Bakr. “Any profession that we can ‎cover for him. We are also covering dental treatment up to 5,000 [Israeli] ‎shekels. We cover implants.”

Implants! I just got paid big bucks for one. But you get them free if you commit terrorism against Israel!

Every American, especially those who see Palestine as a virtuous land of the oppressed, should know about this program, which violates every tenet of human decency. I hope Biden doesn’t resume unrestricted payments to Palestine, and I have to say that restricting those payments so they don’t finance terrorism was one of the few good things accomplished by the Trump administration.

Sources for the data in this post come from here, here, here, here, here, and here.  It need hardly be added that the U.S. mainstream media, which tilts towards Palestine, does not often report on this travesty. The New York Times did publish a heartening article in November saying that, to court Biden, the Palestinians are considering cutting back on these payments (there will still be payments), for Democrats are not all that keen on “pay for slay”. (I’m betting, though, that the Squad isn’t opposed to the program.)