You already know that it galls me when people extol the “oppressed” Palestinians—whose government has refused generous Israeli offers of peace time after time—and decry the “war crimes” committed against them by Israel. They never mention, of course, the three big war crimes regularly committed by Palestinians, which are far more odious than the accusations of “occupation” which are arguably questionable.

But one of the most odious and reprehensible acts that the Palestinian government commits towards Israel is to pay terrorists for killing Israelis, often civilians. If the terrorist dies as a “martyr”, his or her family gets money—often a substantial sum. This is called “pay for slay,” and is highlighted in the video below. That video also shows the disgusting anti-Semitic depictions of Jews on Palestinian state media (something repeated throughout the Arab world), things that the Woke Left also ignores when going after Israel.

There have been odious acts of murder by Israelis, too,like Baruch Goldstein‘s 1994 murder of 29 Palestinians, and the 2014 kidnapping and killing of a Palestinian boy by three Israelis. Goldstein was beaten to death on the spot. The Israelis were given long prison sentences, not rewarded, and that alone shows the moral difference between the Palestinian and Israeli governments.

It takes a special kind of brainwashed hatred to make a mother experience joy when her son kills himself along with a bunch of Jewish civilians, or to make a small kid hate Jews so much.

Do note the words of Mahmoud Abbas in this video; he’s the President for Life (apparently) of the state of Palestine and head of the Palestinian Authority:

How much do you get for killing a Jewish civilian or soldier (in the latter case, a violation of international law if the killer isn’t uniformed)? You can read about “pay for slay” here and here. From the first source:

In the Palestinian Authority’s 2018 budget, funding levels for “pay-for-slay” programs and the Palestinian Authority’s social welfare programs are disclosed. Terror payment programs include salaries to prisoners set at nearly $150 million. Allocations to those killed or injured in “wars” with Israel is budgeted at over $180 million, together more than $330 million overall — consuming over 7 percent of the annual Palestinian budget. These payments go to approximately 10,500 imprisoned and released prisoners and some 37,500 families of martyrs and injured. In contrast, the entire 2018 budget for the Palestinian Athority’s social welfare system is about $214 million dollars, and supports 118,000 households: a much larger group subsisting on a much smaller budget.

Enshrined in Palestinian law, imprisoned terrorist payments are almost entirely dependent on length of incarceration, and not on personal financial circumstances. Prisoners receive 1,400-12,000 shekels, paid monthly [$1 US = 3.6 shekels], regardless of any need-based qualifications. Families of those killed perpetuating terror attacks receive 6,000 shekels immediately, then a minimum of 1,400 shekels monthly, for life.

True social welfare recipients, in contrast, are only eligible based on need, and they do not get automatic payments. Once approved, they receive benefits of only 250-600 shekels per month, paid quarterly. The maximum welfare payment is 57 percent less than the minimum pay-for-slay salary.

From the second source (Palestinian Media Watch), we get a list of the money paid by the Palestinian Authority to those in jail for terrorism. (Families get additional payments; see below.)

Using information obtained from the Israeli Prison Service (IPS), PMW has calculated that the Palestinian Authority paid at least 230 million shekels in salary payments to terrorist prisoners in 2018.

For example, based on the information provided by the IPS that appears in the 2 left hand columns in the chart below (“time served” and “number of prisoners”) and the PA’s own terrorist prisoner pay scale (“salary” column), PMW has calculated that in the month of January 2018 alone the PA paid almost 20 million shekels in salaries to the terrorist prisoners.

. . . Finally, it should be stressed, that these PMW calculations refer only to the PA payments to terrorist prisoners and released terrorist prisoners, and do not include the PA payments to the families of dead terrorists, the “Martyrs.” The PA budget for the terrorist “Martyrs” is listed under the same budget category as the wounded and those civilians who have been killed but were not involved in terror. The 2018 PA budget allocated 687 million shekels for all these. Under Israeli law, the amount the PA spent on the terrorist “Martyrs” and wounded involved in terror must also be deducted from the money Israel collects and transfers to the PA. At this point, PMW does not have a comprehensive report on the amounts paid by the PA to the families of the terrorist Martyrs or to the wounded terrorists.

(The figures are in Israeli New Shekels, with $1 US being about 3.6 shekels.) 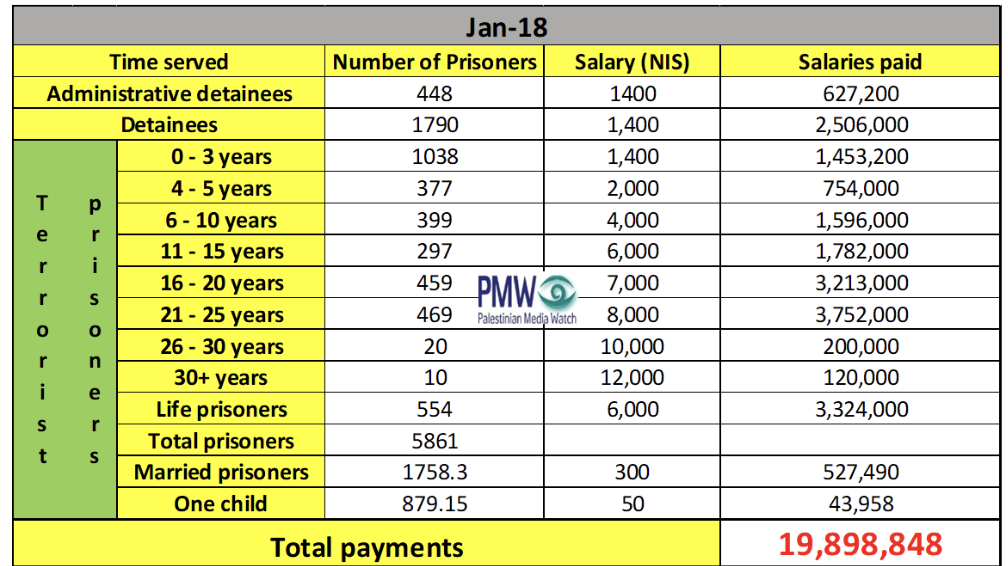 If you’re going to impugn these sources—and remember that Western liberal media doesn’t talk about this stuff—then show why the figures are wrong. But there’s simply no questioning, since the Palestinian government admita it, that terrorists or their families (in the case of “martyrs”) reap substantial benefits from attacking and killing Israelis. You can explain to me why that’s justified.

It is infuriating to see the Left, much of the West, and the United Nations demonize Israel, with the UN passing resolution after resolution against it, while completely ignoring the transgressions of Palestine and Palestine’s clear violations of international law. It makes no sense unless you bring in the notion of anti-semitism.

41 thoughts on “Palestinian “pay for slay”, an odious practice ignored by the Western press”