Imagine what the world would say if every Israeli—soldier, or civilian—who killed a Palestinian in a deliberate act of terrorism, and was killed during or jailed after the act, got monetary rewards for life! Imagine if every IDF soldier who killed a Palestinian civilian got several hundred dollars a month, with the amount increasing with the number of civilians killed.

Well, you can imagine what the world would say on top of the opprobrium it already heaps on Israel. Such payments would be deemed immoral, unconscionable, and a war crime.

But in fact, such a fund exists—but to reward Palestinian terrorists who go after Israelis. It’s called the Palestinian Authority Martyr’s Fund, known more gruesomely (but accurately) as the “Pay for Slay” fund. I’ve written about it in detail here and here. About 7% of the annual budget of the Palestinian Authority (PA), which amounts to millions of dollars for the Fund, goes to pay off “martyrs” and their families. Nor do the emoluments stop when the terrorist is released: he or she gets continued payments and often a cushy job with the PA.

Here’s what I wrote about it a while back.

The program consists of the Palestinian Authority giving generous payments (often for a lifetime) to those Palestinians who get caught committing terrorism against Israel and are either killed or put in Israeli prisons. (They often justify it as reward for fighting the enemy, but the “enemy” often consists of Israeli citizens, including women and children.

If a Palestinian kills or injures an Israeli in an act of terrorism, or simply commits a non-murderous act like terrorist arson, he or she get a comfortable wage, and, if you get out of prison, a good job and other benefits in Palestine. (The amount you get goes up with the heinous nature of the crime; murder is the most compensated act.)

. . . . It’s even worse, for many countries, including much of the European Union, finances this “pay for slay” program by giving aid money directly to Palestine. A few countries (including Australia, Norway, and the U.S.) have cut down their contributions to Palestine because of this program, but much of the EU simply gives aid to Palestine that can be used to pay terrorist’s “martyr pensions”. Those pensions constitute  about 7% of the total Palestinian budget: or about $355 million per year (in 2017).

The Israeli government has the option of allowing the “Pay for Slay” money to go through, and last year, during the pandemic, it intermittently stopped withholding the murder payments, but the amount that the Palestinian Authority gave to terrorists still amounted to nearly $200 million. And, according to an article in the Washington Post (click on screenshot below), taken word from an article in The Associated Press., Israel froze that money on Sunday: an amount of nearly $200 million.

But, as an article in Honest Reporting notes (see second screenshot below), both the AP report and the Washington Post‘s article are full of distortions and lies, implying not only that the money mostly doesn’t go to terrorists, but these journalists also use a “conflicting narrative” attitude towards the Martyr’s Fund, attempting to “balance” what Israel says about it, which happens to be true, with Palestinian retorts, which happen to be false.

This is one example of what’s supposed to be real news reporting is tainted by ideology.

Click on the screenshot below to see the Washington Post‘s article:

I’ll go through the first half of the article bit by bit, showing where the Washington Post distorts the truth. The paper’s reporting is indented; my own comments are flush left.

Israel’s Security Cabinet on Sunday froze nearly $200 million in tax transfers to the Palestinians that it said represented the amount of money the Palestinians transferred to the families of alleged attackers last year.

First of all, these are not “alleged” attackers. Some are killed during acts of terrorism, and many others are in Israeli prisons—after a trial in which their rights are guaranteed. The “alleged” terrorists are sometimes found not guilty and are often represented for free by Israeli lawyers. Once they are convicted, and the money from Palestine starts rolling in to them or their families, they are no longer “alleged” attackers. They are “convicted attackers”, which is the paper’s euphemism for terrorists.

Under interim peace agreements, Israel collects hundreds of millions of dollars in taxes for the internationally recognized Palestinian Authority. The tax transfers are a key source of funding for the cash-strapped Palestinians.

Israel has long objected to the Palestinian “martyrs fund,” which provides stipends to thousands of families that have had relatives killed, wounded or imprisoned in the conflict with Israel.

The claims that the martyr’s fund “provides stipends to thousands of families that have had relatives killed, wounded or imprisoned in the conflict with Israel” is false. The stipends only go to those who are killed, wounded, or imprisoned while committing acts of terrorism against Israel, most of them aimed at killing Israeli civilians. This is a gross distortion of the facts.

The Palestinians say the payments are a type of welfare system meant to assist families affected by the conflict. But Israel says such payments serve as rewards and incentives for violence.

This is a bogus “dueling narrative” approach to the conflict. The money is meant to incentivize terrorism, not to “assist families afflicted by the conflict”, for which there is a separate PA social welfare fund.  The crime is paying terrorists for killing civilians.

. . . For the Palestinians, the families of attackers are widely seen as victims of a half century of Israeli occupation. The Palestinians say that many Palestinians are unfairly held by Israel and that the number of prisoners involved in deadly attacks is a small percentage of those aided by the fund.

This is another bit of the dueling narrative; the first sentence is misleading while the second is an arrant lie. The first sentence implies that Palestinian terrorists who go after Israeli citizens are justified in their actions because they are “victims of a half century of Israeli occupation.” Leaving aside the question of whether Palestine is “occupied,” there is no moral justification for killing innocent people because of another government’s actions.

Further, the statement that “the number of prisoners involved in deadly attacks is a small percentage of those aided by the fund” is another bald-faced lie. 100% of the Martyr’s Fund money goes to reward terrorists and their families. The paper is conflating the Martyr’s Fund with other funds that the PA uses to help the destitute or those in need of social welfare. By referring to “the fund”—the fund from which Israel withheld $200 million, the Post implies that the Martyr’s Fund is mostly for social welfare.

There you have it: a news report slanted to cover up and defang the horrible thing that the PA is doing by incentivizing terrorism. It’s an example of what Orwell, in his famous essay “Politics and the English Language“, calls euphemisms designed to blur the truth:

The inflated style is itself a kind of euphemism. A mass of Latin words falls upon the facts like soft snow, blurring the outlines and covering up all the details.

You can read a longer analysis in this article from Honest Reporting (click on screenshot): 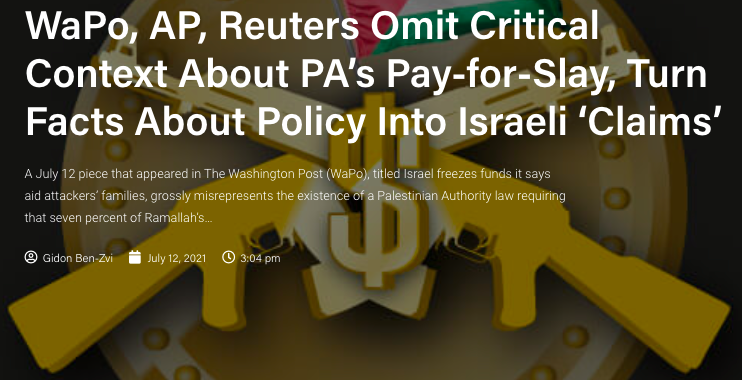 This article also mentions a Reuters report which does the same thing. Here’s a quote from Reuters:

Qadri Abu Baker, head of prisoners affairs in the Palestine Liberation Organization, called the Israeli measure a crime of “terror and piracy.”

There’s not even a counter-quote from an Israeli official! In such ways do the mainstream media demonize Israel and valorize the Palestinians. The worst part is that this is straight news, not an op-ed. After reading both the NYT and WaPo for a while, I’ve concluded that the WaPo is worse on “social justice” issues like this. But the AP and Reuters, the Big Sources, are also responsible. Is nobody checking the facts?

It is part of the hypocrisy of the Left that, while ignoring the perfidies of Palestine while concentrating solely on Israel’s deeds, they completely “forget” to mention the Martyr’s Fund.