I’m not going to go into detail about this issue, which was described on Bari Weiss’s site (I think her article is free). Suffice it to say that it tells the tale of how a progressive Democrat, who worked in the trenches for the Legal Aid Society, providing legal help to the indigent (largely black people), can still get harassed and bullied because she doesn’t adhere to the au courant version of critical race theory.

Click on the screenshot to read about Maud Maron, a liberal lawyer trained by Kathleen Cleaver (look her up), and an employee of the Legal Aid Society of New York since 1998.  By all accounts of her close colleagues, she’s a terrific lawyer. But none of those who praised her dared give their names. Why? Because she’s in the process of being canceled for writing a letter to the New York Post denouncing the racial tribalism promoted by Critical Race Theory and its everyday interpretations and tenets. 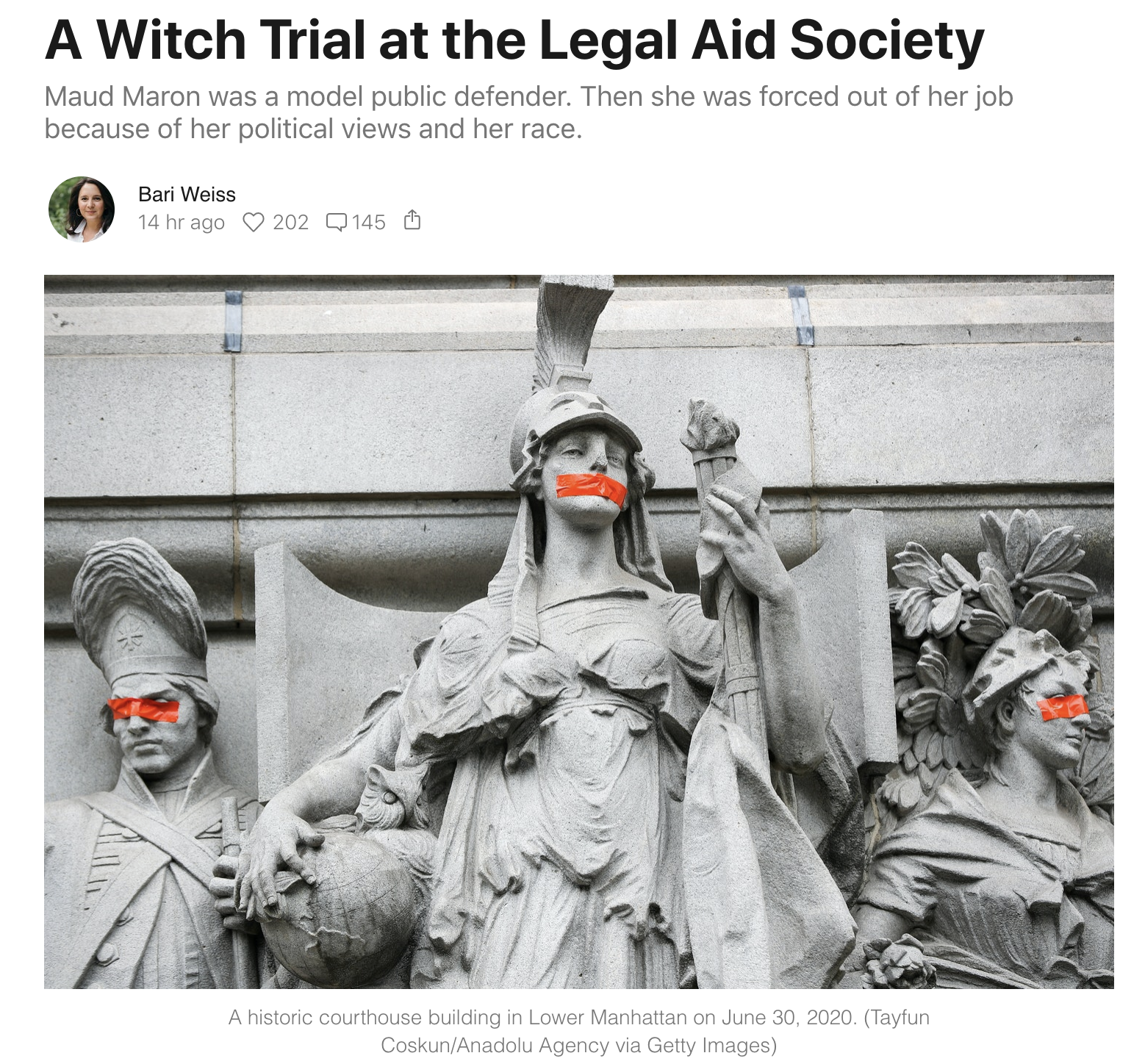 Here’s the letter that Maron, who has the best social-justice bona fides of any white person I know, wrote to the New York Post (click on the screenshot): 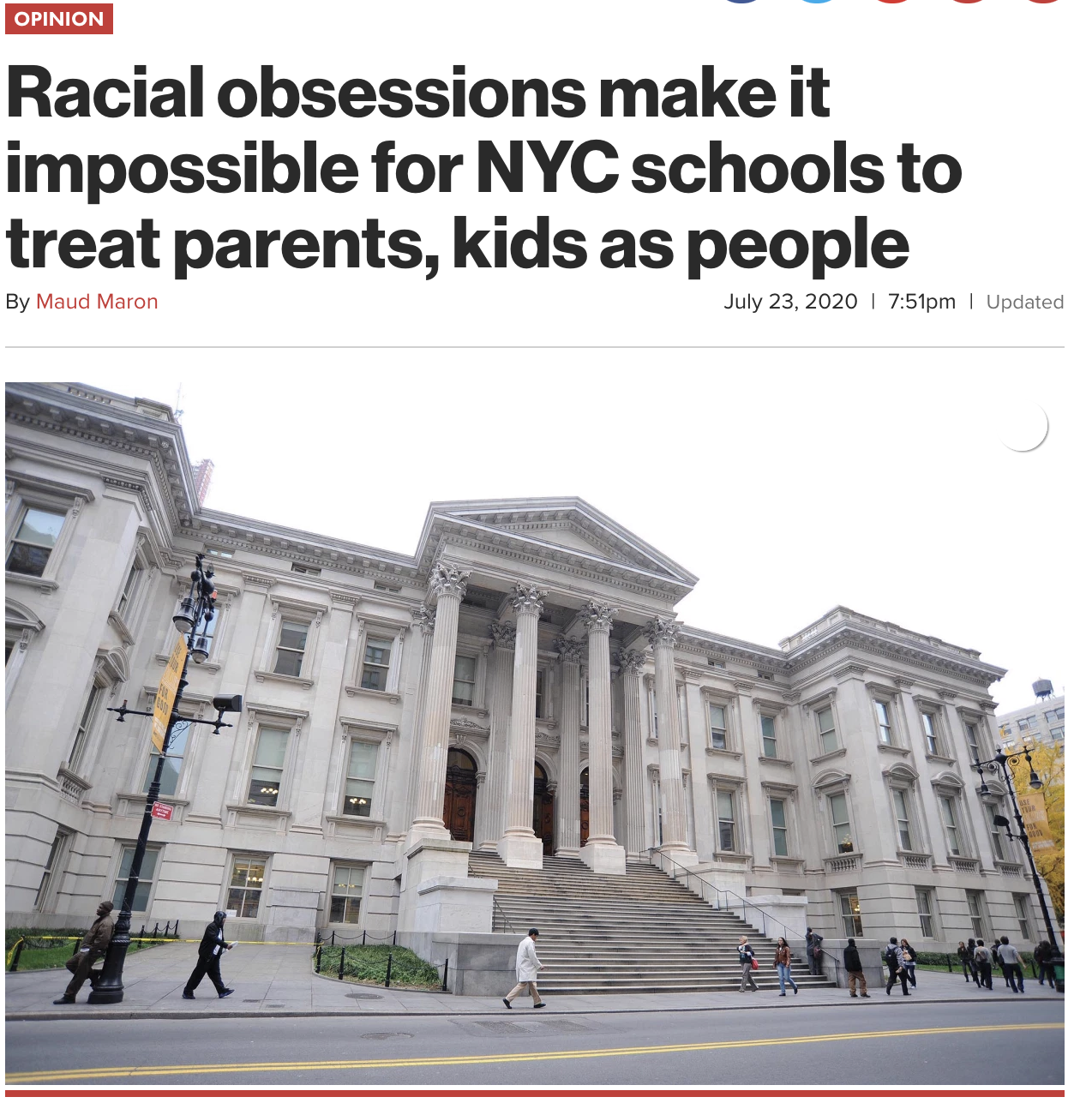 Quotes from the letter:

I am a mom, a public defender, an elected public-school council member and a City Council candidate. But at a city Department of Education anti-bias training, I was instructed to refer to myself as a “white woman” — as if my whole life reduces to my race.

Those who oppose this ideology are shunned and humiliated, even as it does nothing to actually improve our broken schools.

Though facing severe budget cuts, the DOE has spent more than $6 million for the training, which defines qualities such as “worship of the written word,” “individualism” and “objectivity” as “white-supremacy culture.”

The administration, and many local politicians, buy into a benign-sounding but chilling doctrine called anti-racism, which ­insists on defining everyone by race, invites discrimination and divides all thought and behavior along a racial axis.

Many of the theories trace to “White Fragility,” a small-minded book which relentlessly insists all white people are racist and need to think about race all the time. Conveniently for its author, who charges $6,000 an hour to discuss this conundrum, there is no way to fix the situation … except with more of her expensive workshops.

. . .We all want a well-integrated, high-quality public-school system. Parents have the right to demand an education that prepares their children to meet or exceed grade-level expectations, which in America often lag other countries.

Those who yell the loudest about integration should stop the accusations against those who think or speak differently than they do about the shared goal of integrated, quality schools — and find ways to work together.

Well, you can imagine the result. Maron was attacked by the Black Attorneys of Legal Aid Caucus, who said she wasn’t qualified to be a public defender, and called “a classic example of what 21st century racism looks like.” Her commitment to representing people of color in court (which she had done very well) was questioned, and the social-media mob went after her on Twitter. One example:

The result? She filed a Title VII lawsuit for workplace harassment, and is having trouble finding not only lawyers to defend her, but also people to defend her using their names. Bunch of cowards! Nor did the Legal Aid Society come to her defense before the lawsuit was filed. 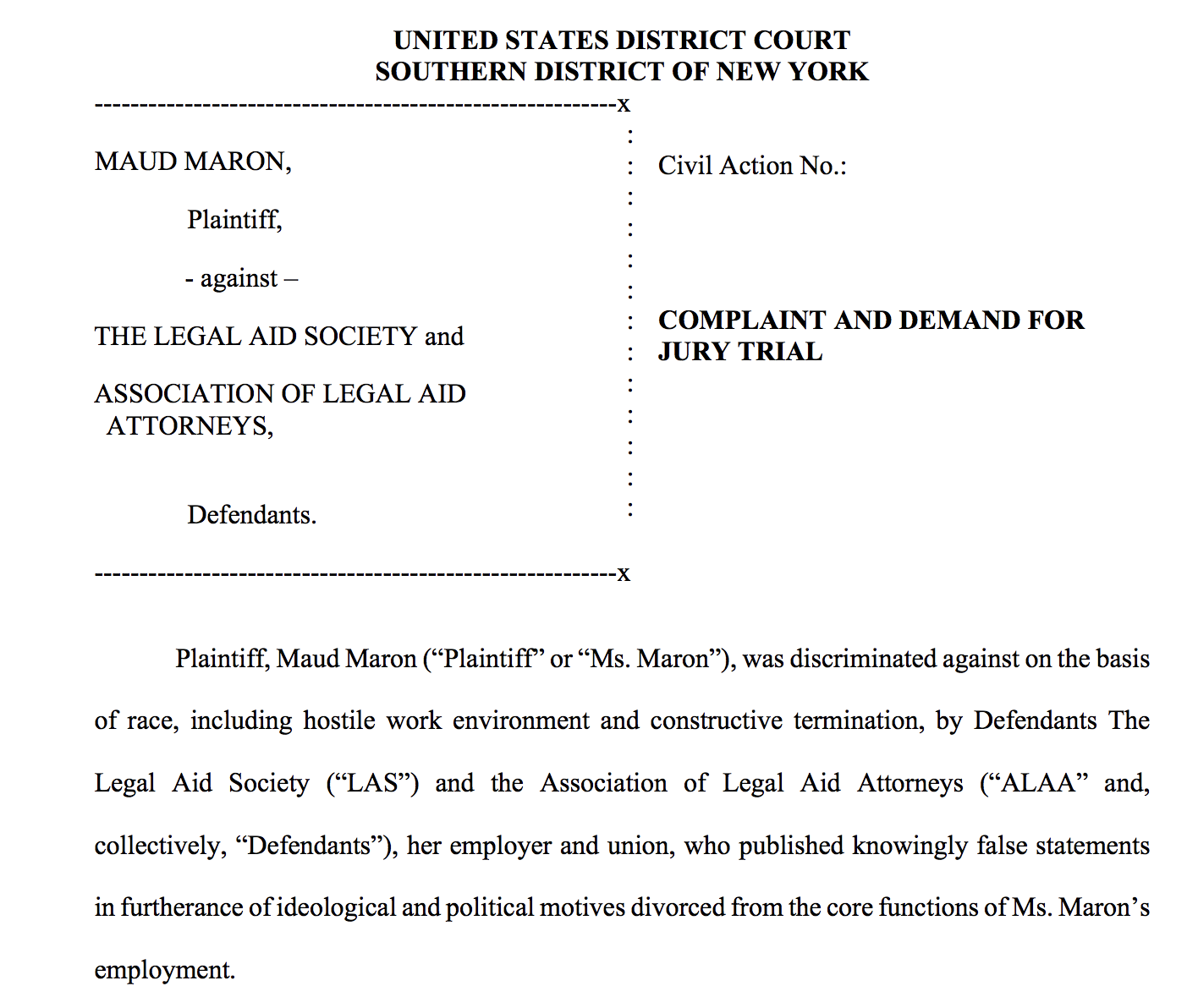 This is a prime example of what Sam Harris referred to yesterday in his interview with Helen Pluckrose when he said these things:

“Grownups should be able to talk about more or less everything with a cool head and not endlessly castigate one another for merely thinking out loud.”

“One of the things that’s so pernicious about this silencing effect is that it creates an illusion of consensus where you have the most voluble and hysterical activists taking up most of the oxygen and successfully cowing other people into silence for fear of the reputational damage that awaits them if they open their big mouths on any number of topics, race being only one.”

. . . “Racism exists in some places, but doesn’t exist everywhere, and it is being claimed to exist everywhere and is being found everywhere in what is clearly a mass hallucination. And this hallucination is being defended by people who are highly incentivized to defend it; and the level of dishonesty and callousness that surrounds this whole enterprise is just appalling. Genuinely good people, who everybody knows are not racist or sexist or transphobic, are being sacrificed to this new religion.”

Maud Maron is one of the genuinely good people who is becoming a human sacrifice. Ceiling Cat help us all!