More about the COVID-19 booster shots. Will we need them? After the CDC and the FDA conferred with Pfizer officials yesterday, the government agencies say that we need more data on what infections occur in already-vaccinated people. In the meantime, Israel is already giving third shots of the Pfizer vaccine to immunocompromised people. If history is any guide, though, the U.S. will eventually follow Israel’s lead, and for everyone, not just the compromised.

After Democrats in the Texas House of Representatives fled the state to deny the GOP a quorum for voting on the new bill tightening voter registration, House Republicans voted to track down the fleeing Dems and arrest them. But of course Texas law enforcement doesn’t reach into Washington, D.C., so it’s an empty threat. And, ultimately, the GOP will win this one, as the Democrats can’t prevent a “yes” vote forever. I’m not sure what’s been accomplished by this theater of the absurd except to call attention to what Texas is trying to do, which we already knew. I thought it was amusing, though, that on the news a Texas Republican referred to the fleeing Democrats as “critters.”

Now that consumers are out and about with money, the expected outcome has occurred: big inflation. According to the New York Times, the inflation rate from last June to this June rose to 5.4%, the highest yearly rate since August, 2008. But don’t worry; I predict, knowing nothing about economics, that inflation will cool down after people have had their buying spree. Here’s the NYT’s graph of yearly inflation rates per month (inflation rates for each month reflect inflation for the entire year preceding that month). Pro-tip: don’t buy a house or car now. 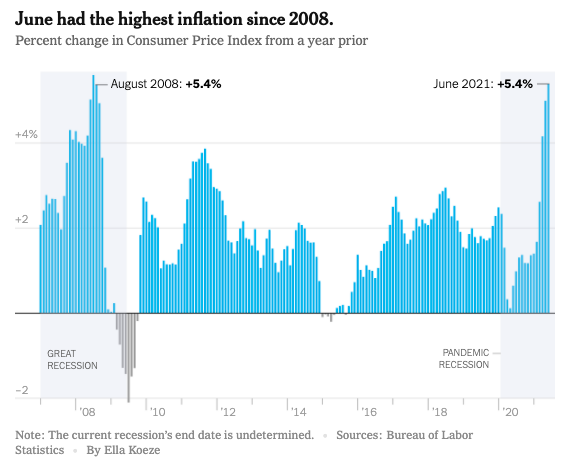 For the first time in 400 years, a beaver kit has been born in Britain’s national park of Exmoor (h/t Jez). This is a big deal:

Beavers were hunted to extinction in Britain in the 16th century for their meat, fur and scent glands but have been reintroduced at several sites since early 2000s. The project is part of the National Trust’s Riverlands programme, which aims to increase biodiversity in UK rivers and tackle the effects of climate change.

As desired, the single pair of beavers introduced in January 2020 have already turned a substantial part of the forest/river complex into wetlands, allowing an ecosystem with lots more species. And now there’s a kit! (A baby beaver is called a “kit”.)

Camera footage shows the six-week-old kit swimming to the family lodge with its mother in a large enclosure on the Holnicote Estate in Somerset, where two Eurasian beavers were released for the first time in the trust’s 125-year history.

There’s a short video of parent + baby at the Guardian site. Here’s a screen capture: 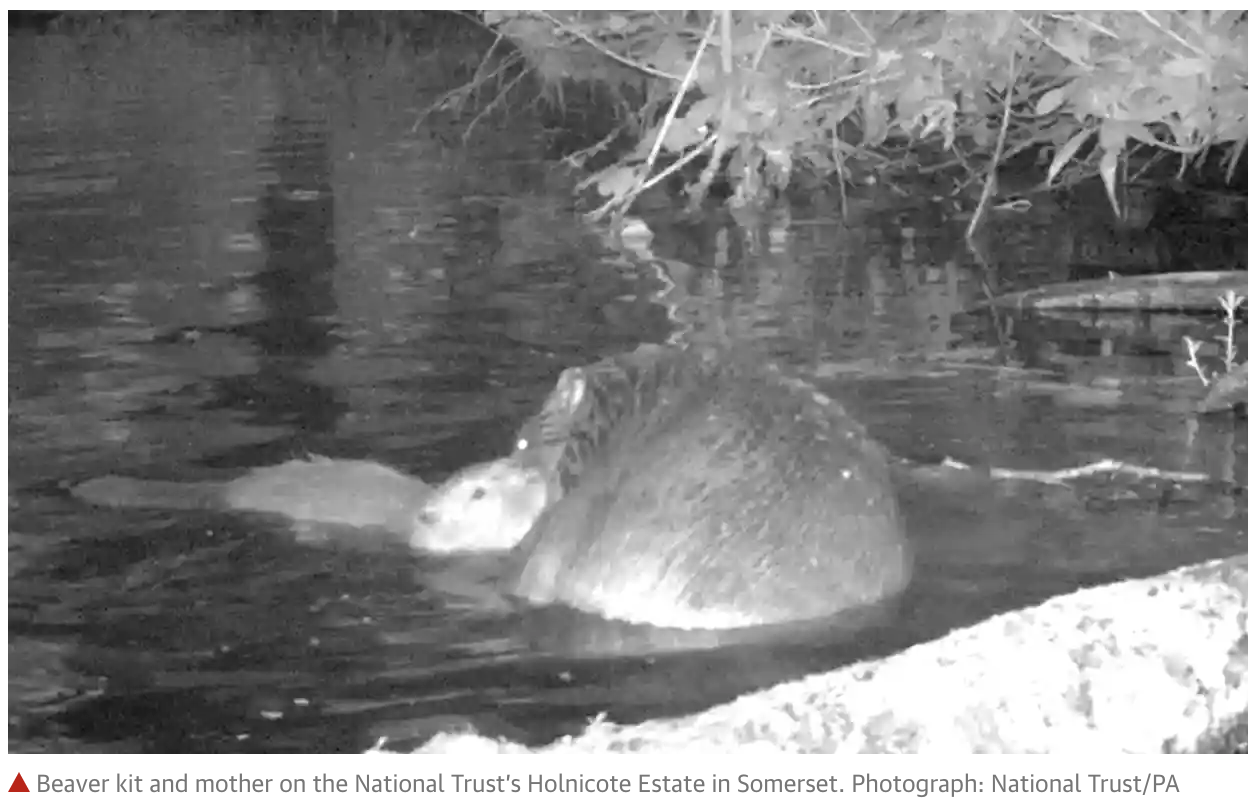 The Church of England is set to apologize for expelling Jews from medieval England.  (h/t: Ginger K):

In written questions submitted to the General Synod, the Church’s legislative body which finished sitting on Monday, church leaders revealed plans to offer an “act of repentance” in a move welcomed by Jewish groups who say the action is “better late than never”.

The Church was instrumental in endorsing historic legislation restricting Jews in the county, such as forcing them to wear identifying badges and banning them from certain professions, which ultimately led to the nationwide expulsion of Jews in the 13th century.

The weird thing is that the Church of England didn’t exist until Henry VIII created it in 1534. So why are the Anglicans apologizing for something they didn’t do?

Food tip: Reader Paul informs us, citing an Eater.com article, that Van Leeuwen, a famed American ice cream maker, is collaborating with Kraft to produce—what else?—Mac and Cheese flavored ice cream. Not only that, but the Eater reviewer said it was good! Look:

Upon taking the first bite, I was hooked. Half of the pint had disappeared by the time I looked up, and I have no regrets. The cheese powder combines with Van Leeuwen’s rich base, made with milk, cream, and sugar, to produce a buttery flavor that’s only slightly cheesy. It doesn’t exactly evoke a bowl of macaroni and cheese in terms of texture, thankfully, but the flavor is strikingly similar. It’s lightly funky, and more complex than the classic blue-box dinner. It’s one of those foods that’s so uniquely compelling that you’re going to be confused while eating it, but definitely won’t want to stop.

Well, I expect one of our more adventurous readers to try this stuff, which was released today. Unfortunately, it’s $12 a pint! Here’s a photo: 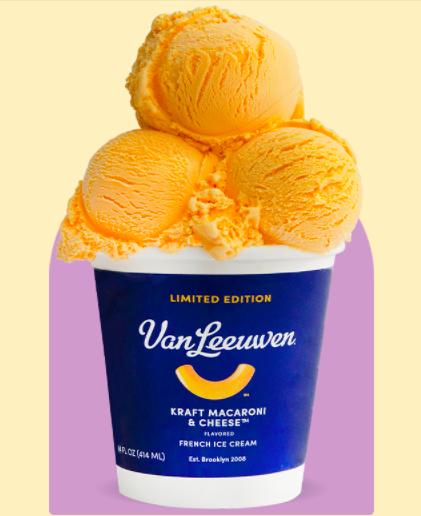 Stuff that happened on July 14 includes:

A version of this act, the Alien Enemies Act, allowing the President to deport those deemed dangerous to America, remains in force today.

Here’s the famous Gustave Doré print of that mountaineering disaster: 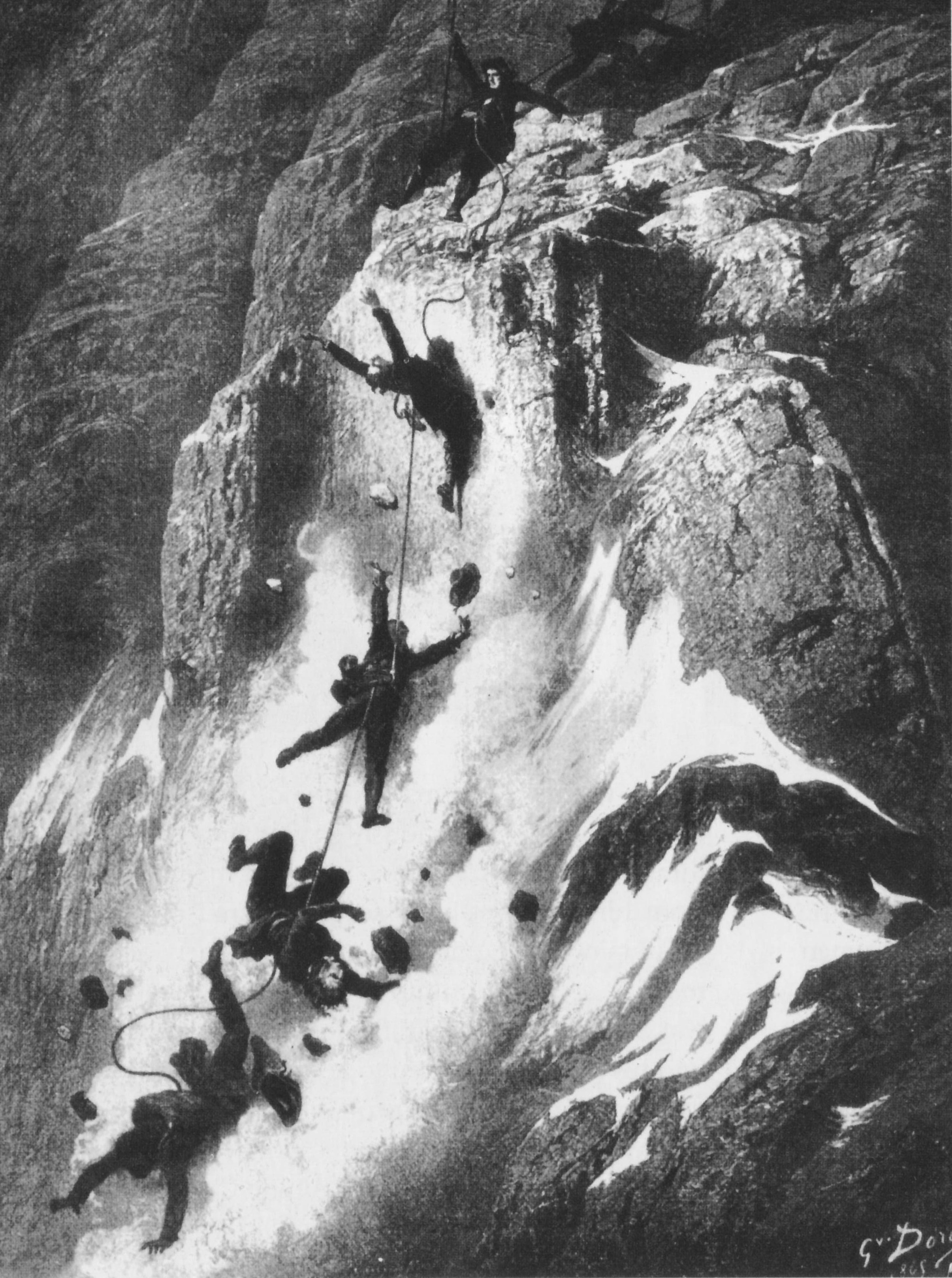 This was after the Great Chicago Fire of 1871. We couldn’t get a break.

Here’s the only existing authenticated (and “upgraded”) image of Billy the Kid, who died at 21 after having escaped from prison. He was a serial murderer and a cattle rustler. The gun: “a Winchester Model 1873 lever action rifle”, and The Kid also has a Colt revolver strapped to his waist. 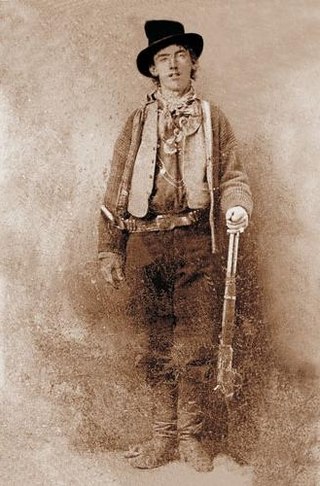 The law is shown below.  Unfortunately, some of the disorders weren’t necessarily genetic, since the “Genetic Health Courts” mandating sterilization often lacked information about the ancestral history of the disorder, and some, like “congenital mental deficiency”, could be caused by many things other than bad genes. 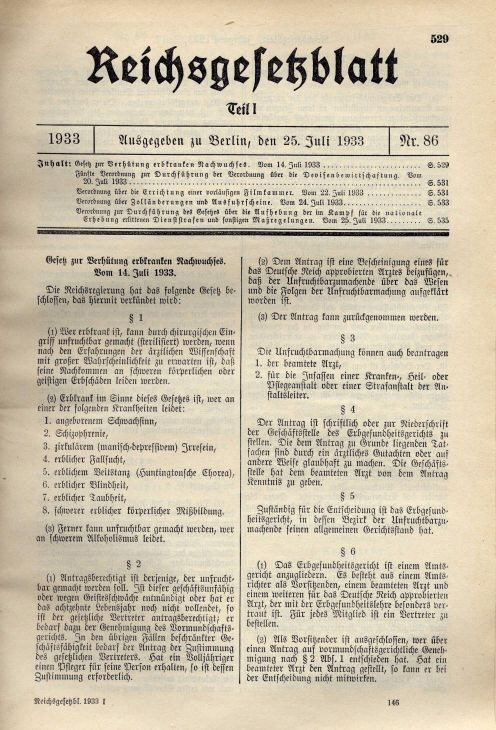 The Monument includes a visitor’s center and the remnant’s of Carver’s boyhood home—a one-room cabin. Here’s all that’s left: 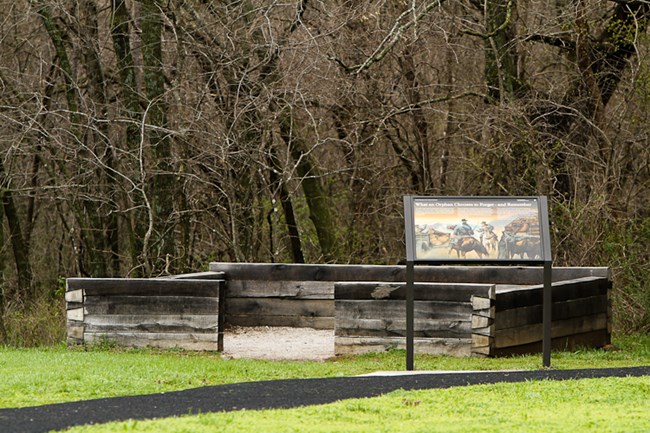 Here’s Goodall in those early days in a photo from the Sierra Club Magazine:

Klimt was a cat lover, and here’s a photo of him with his cat, named “Katze” (“cat” in German):

Woody with his guitar bearing its famous motto: 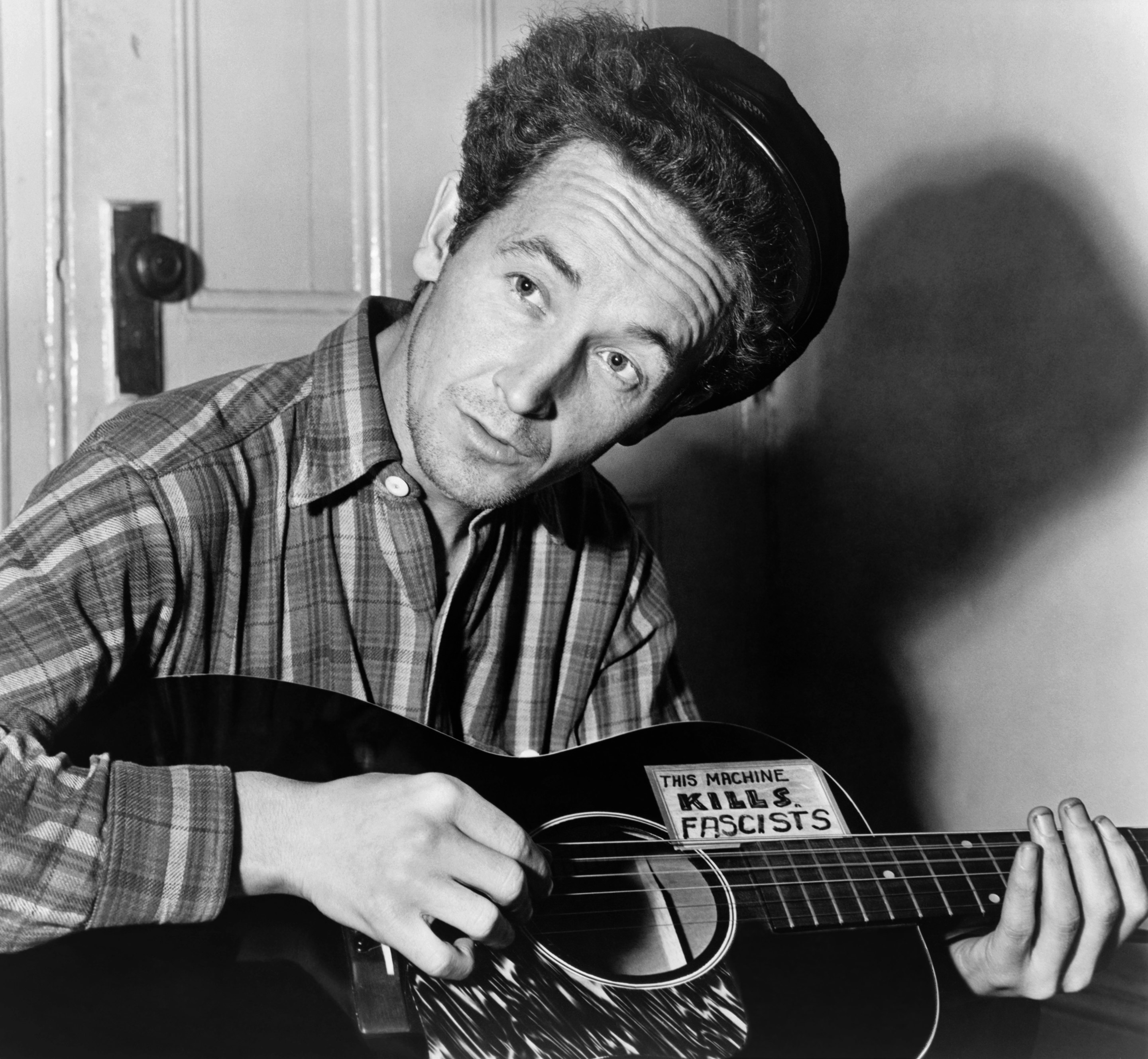 Those who became ex-hominins on July 14 were few, and include:

I would love to have an original Mucha poster on my wall. Here’s a beaut advertising champagne:

Meanwhile in Dobrzyn, Hili is keeping track of the time. But since she doesn’t have a clock or a watch, I asked Malgorzata how she knew what time it was. The response: “I thought Hili was looking at the sun and judging time. To be on the safe side I asked my husband. His answer was: ‘She is looking at the time coming from behind her and getting closer’.” Just let your poor readers decipher it the best they can.

A: What are you looking at?
Hili: Whether it’s time to eat something. 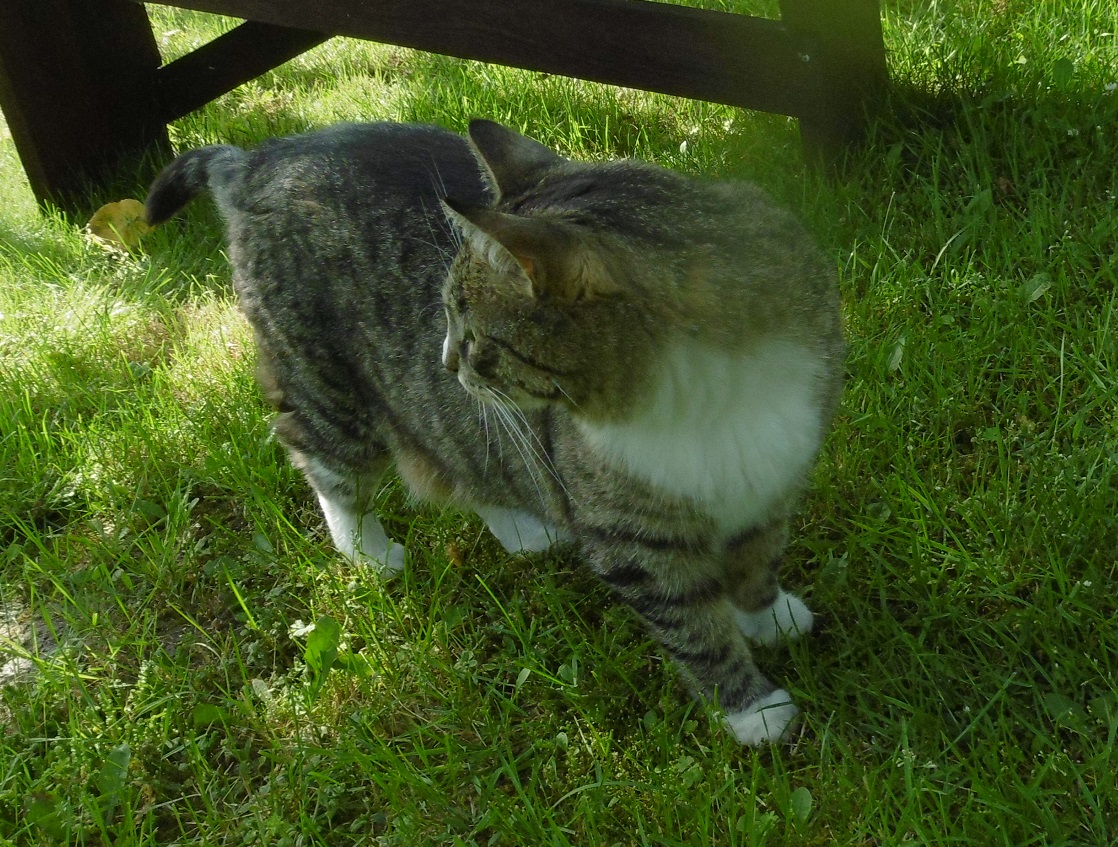 And here is “Ceiling Cat” (or “Floor Cat”), aka Boris, whose staff are my friends Avis and Bill in New Mexico. The explanation:

Bill was under the house doing plumbing for a bathroom remodel (that hole is our future toilet drain!).  Boris was curious what was going on. 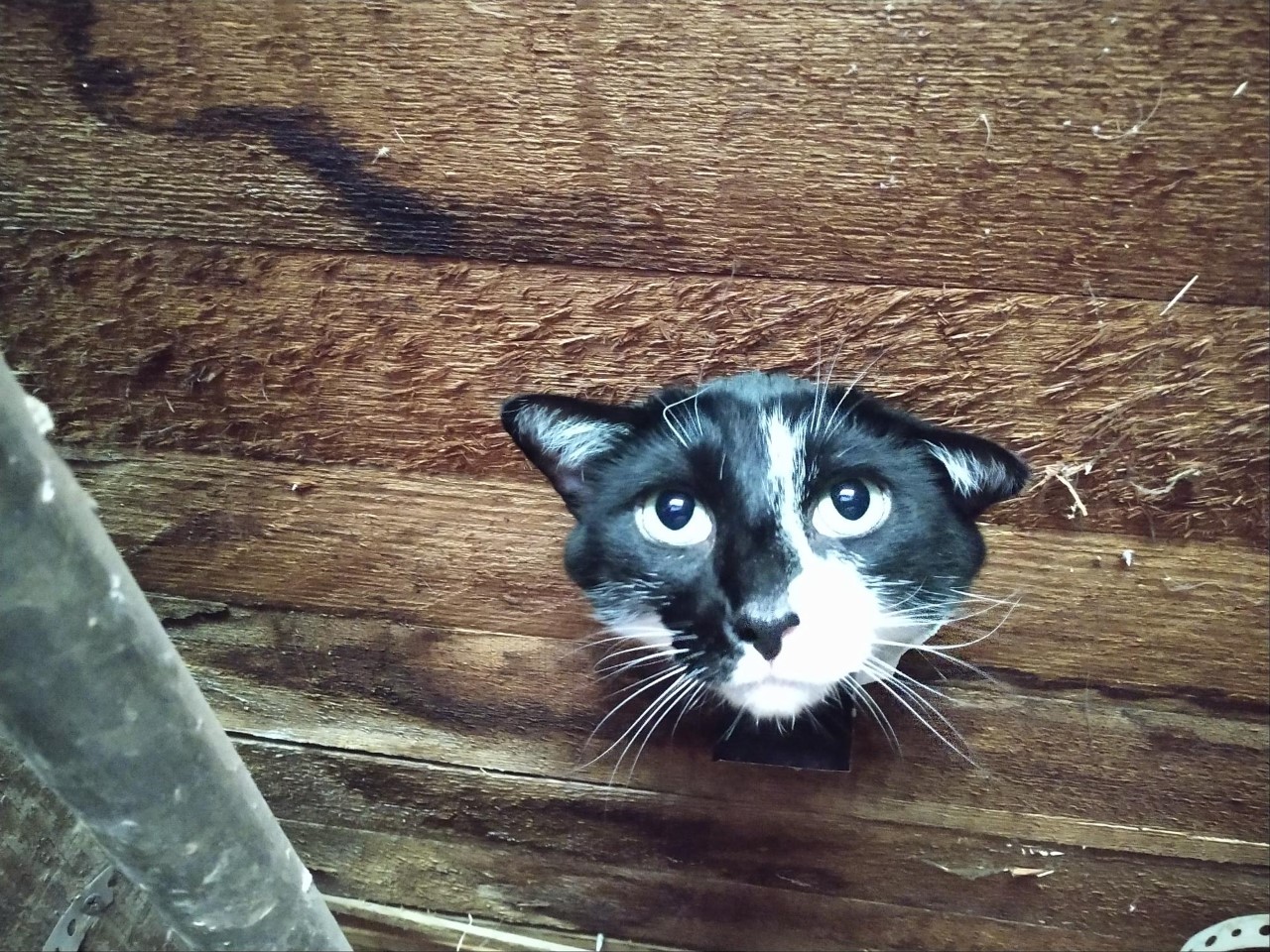 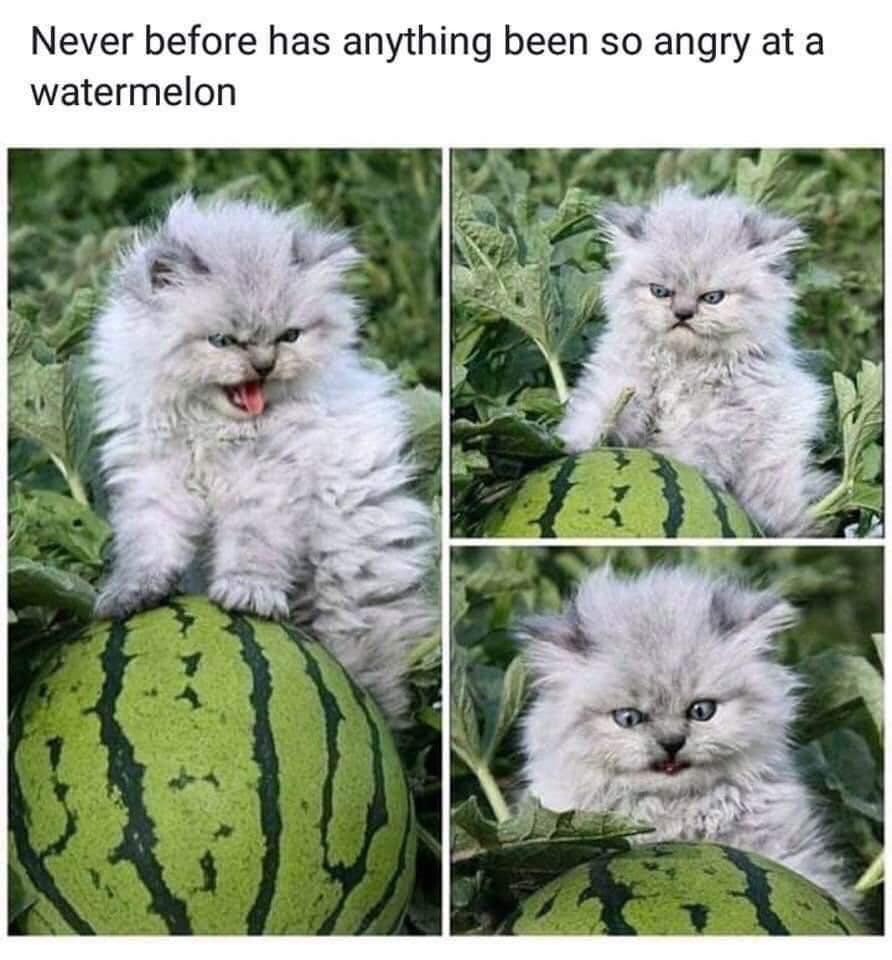 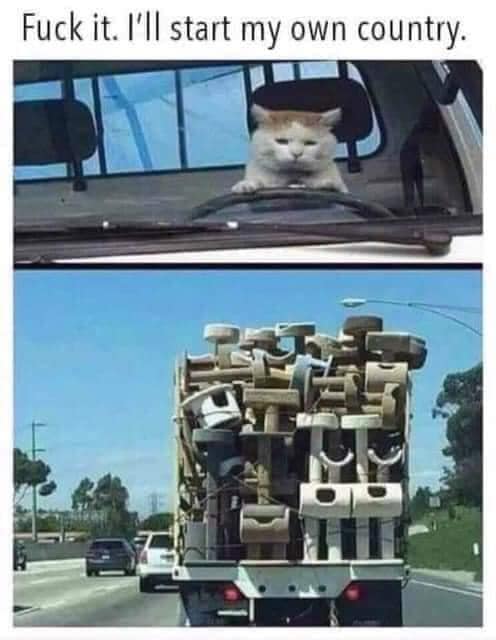 A tweet from Simon. Don’t some of the fish get hurt? Or don’t they care?

Not how I imagined the apocalypse pic.twitter.com/jdY8OujLhB

From Gethyn, who calls this “cats against entropy”:

IKEA sell a storage solution for that. Provided with a suitable KALLAX, cats tend to be self-organising. pic.twitter.com/FtEBLxOaa2

From Luana. This happens to be a true story.

If my @TheBabylonBee writers had pitched this headline I would have rejected it for being too far-fetched pic.twitter.com/wPK2AoAk1Q

Proof of the above, and a sign of the ideological apocalypse:

“This idiot (aka Texas Gov. Greg Abbott) has his eye on the next Republican presidential nomination (assuming Donald Trump doesn’t reclaim it). He’s called the Texas Legislature into special session to address all manner of pressing subjects. Know what’s not on for consideration during the special session? The failure of the Texas electrical grid — the one that left over 150 Texans dead and 4 million without power during the storm last winter. Abbott claims that whole thing was just a clerical error.”

Texas Gov. Greg Abbott tells Chris Wallace that power grid problems in Texas are mainly a paperwork issue that has already been solved by the legislature (there were over 1,000 unplanned outages in Texas last month) pic.twitter.com/JJocH5GZTP

This duck has a beautiful sky-blue bill:

This is a map of UFO sightings and there is a whole god damn PhD thesis in this. pic.twitter.com/mag09umIPS

Mars methane mystery. @MarsCuriosity's Tunable Laser Spectrometer has repeatedly detected methane in Gale Crater, but other instruments haven't. One idea is that gas seeps from the ground & builds up detectable levels at night when Mars’ atmosphere is calm https://t.co/ofY8Uy5axb pic.twitter.com/Aiz5jzMwlA