Today we have travel photos from Richard Bond, whose captions are indented. Click on the photos to enlarge them.

The seven-headed cobra is a common motif in Cambodia, and the first photo shows an example that I liked very much in the balustrade of steps leading to a temple near our hotel in Phnom Penh. 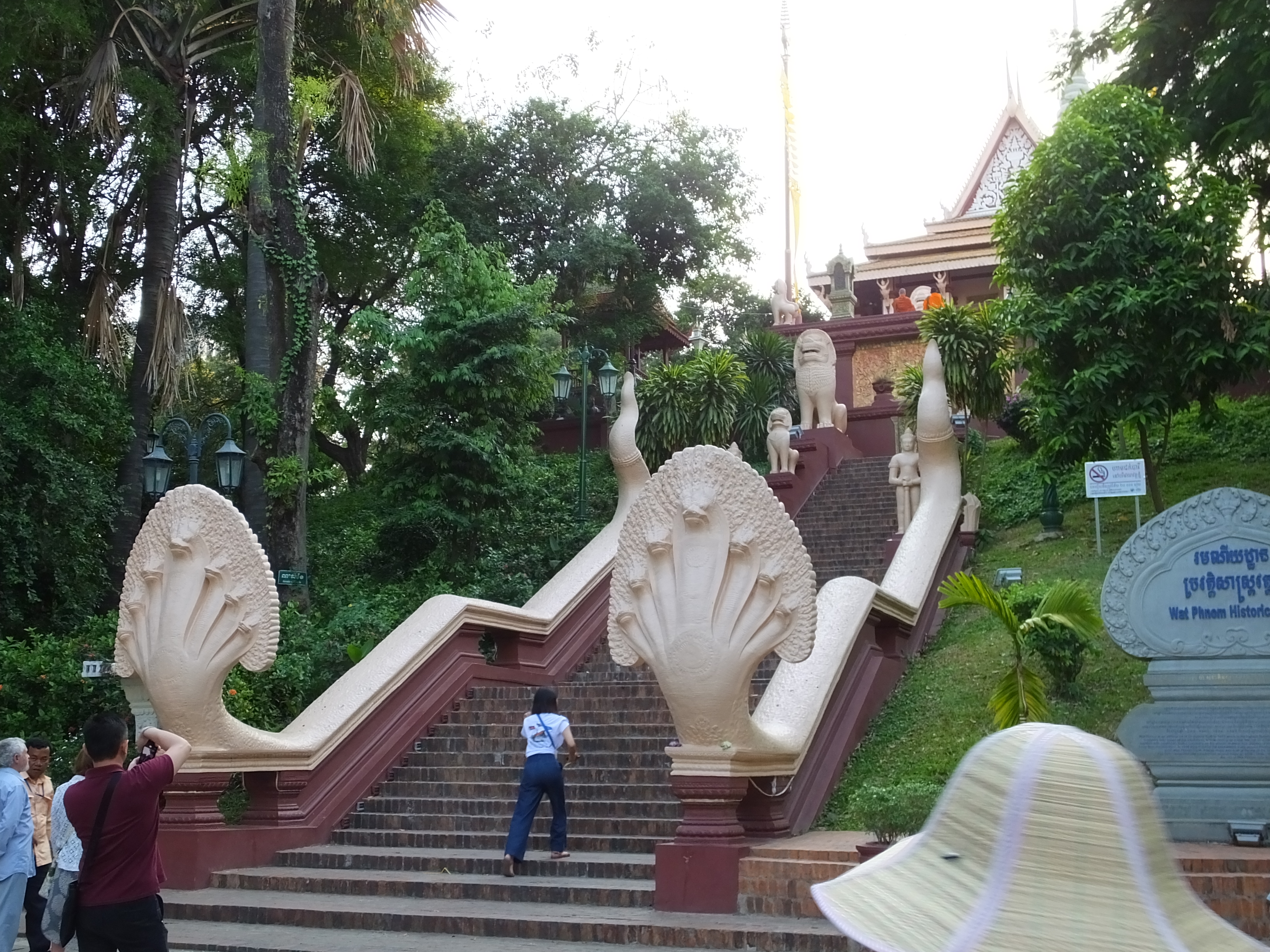 Phnom Penh lies mostly on the west bank of the Tonle Sap river and the much larger Mekong. Unsurprisingly, river traffic is important. This photo shows boats at the southern tip of the peninsula formed by the confluence of the rivers. I believe that people live on these boats. 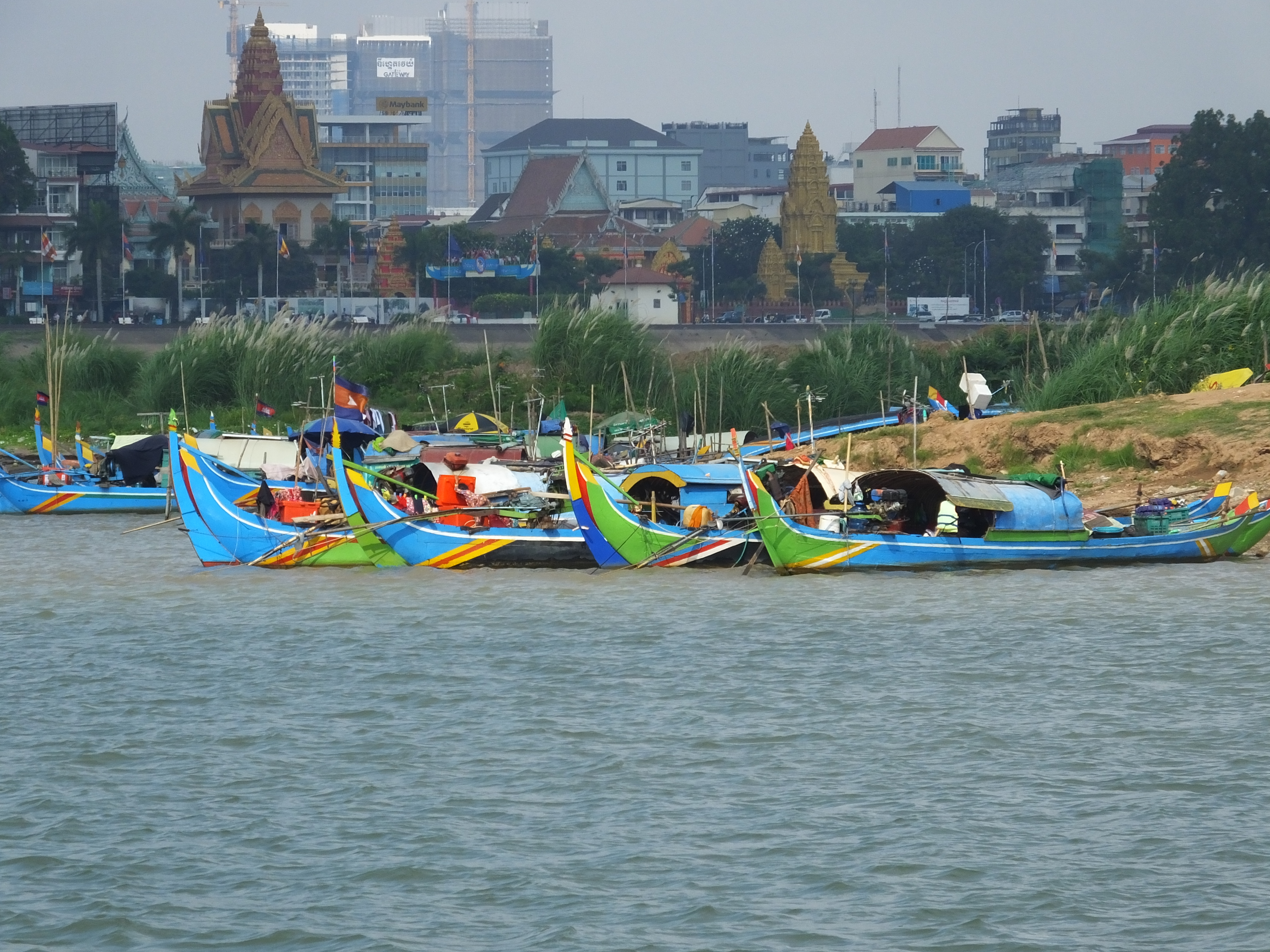 Ferries are a necessity: 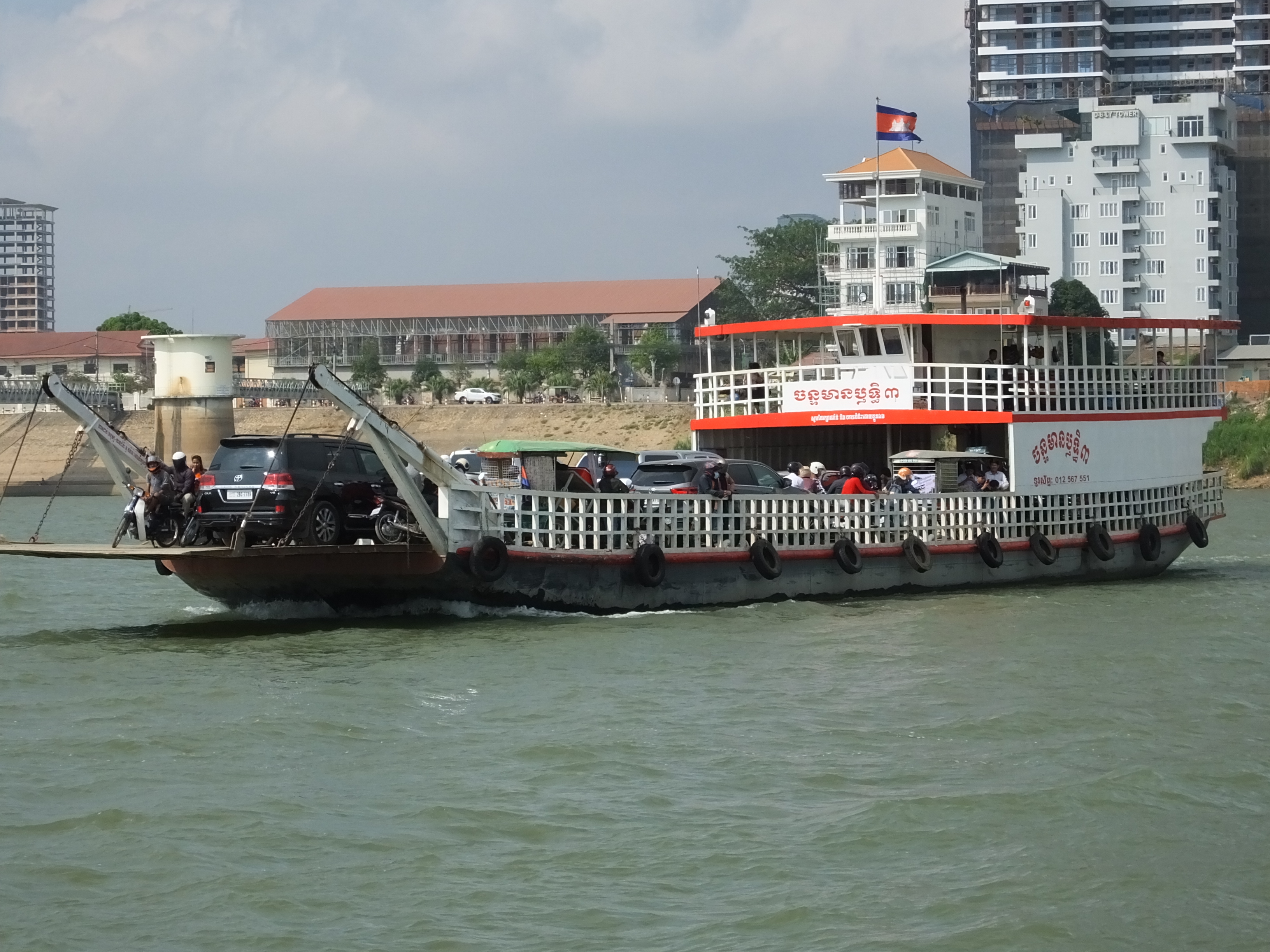 Between Phnom Penh and Siem Reap we stopped at a market. The foods for sale included many stir-fried invertebrates. The first photo shows scorpions and the next a much larger variety; the pale things in the right foreground are silkworm grubs. 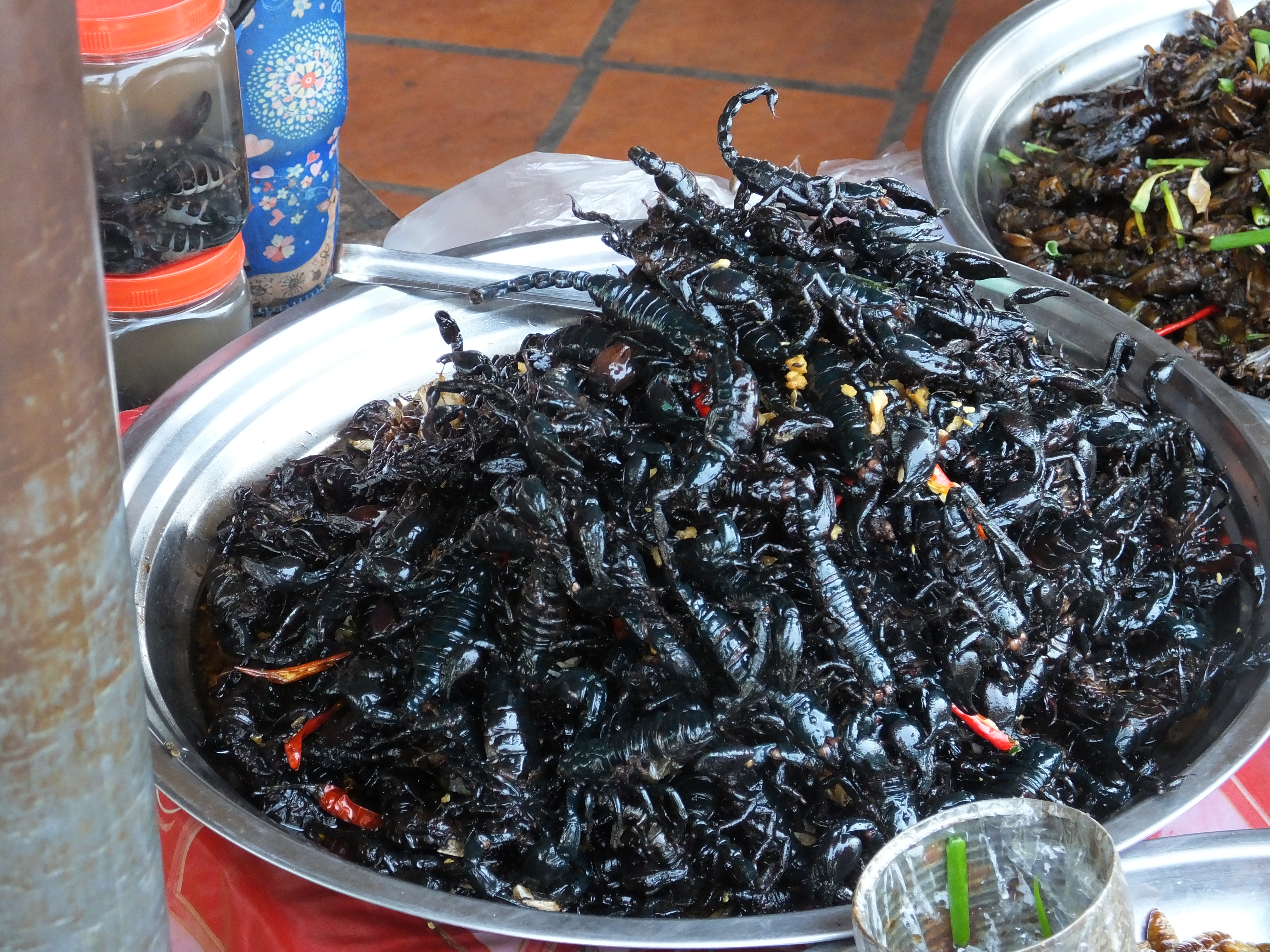 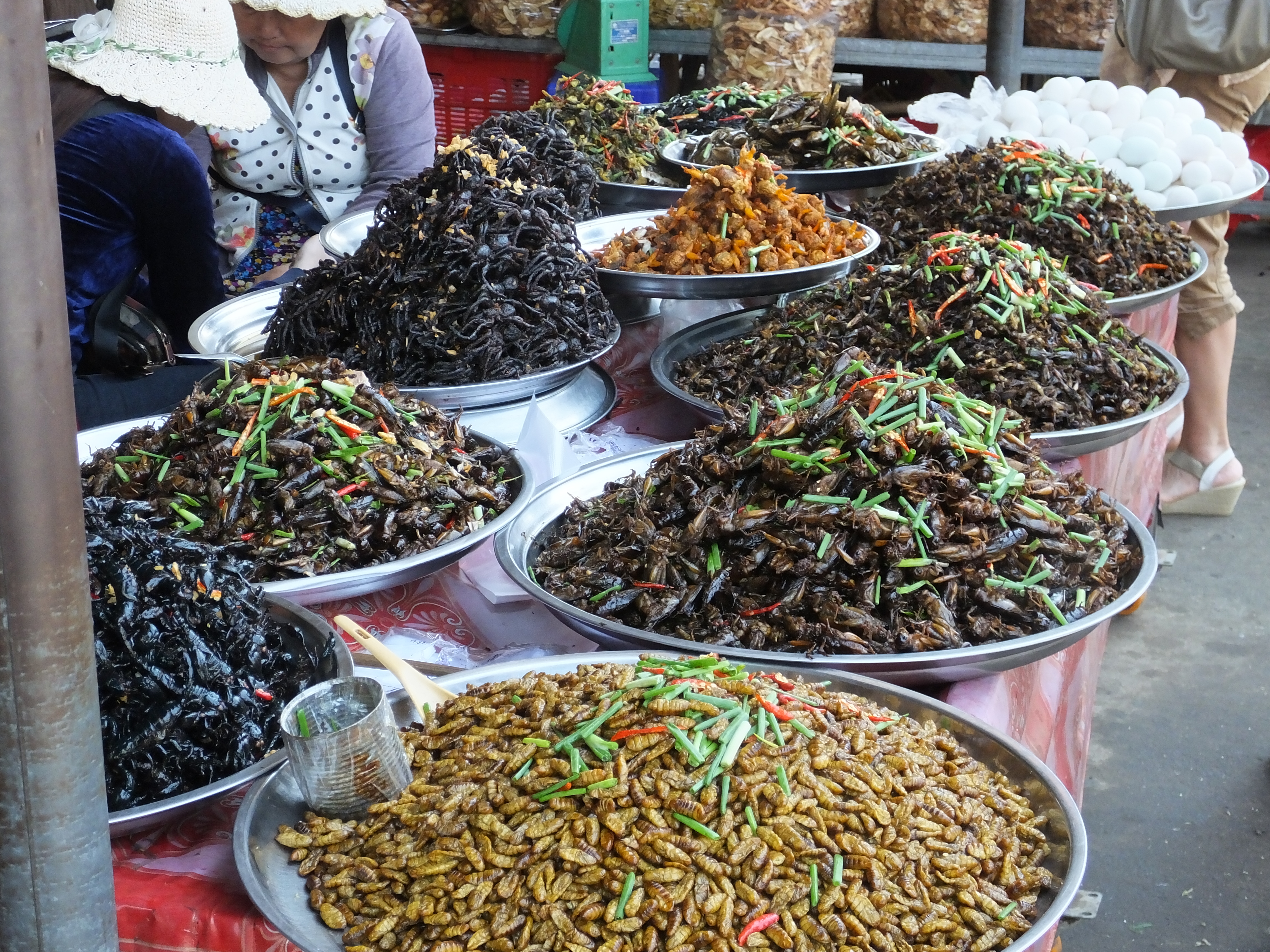 I really liked Siem Reap. It is most noted for the Angkor Wat complex of temples, but there are many more features of interest. The photo below shows a home on the nearest of the many floating villages on the Tonle Sap lake. This lake was filled annually when the Mekong floods caused the Tonle Sap river to flow backwards. Today China diverts so much of the Mekong for its own use that this no longer happens as formerly, and it might be that the lake will become so polluted that the floating villages will no longer be viable. 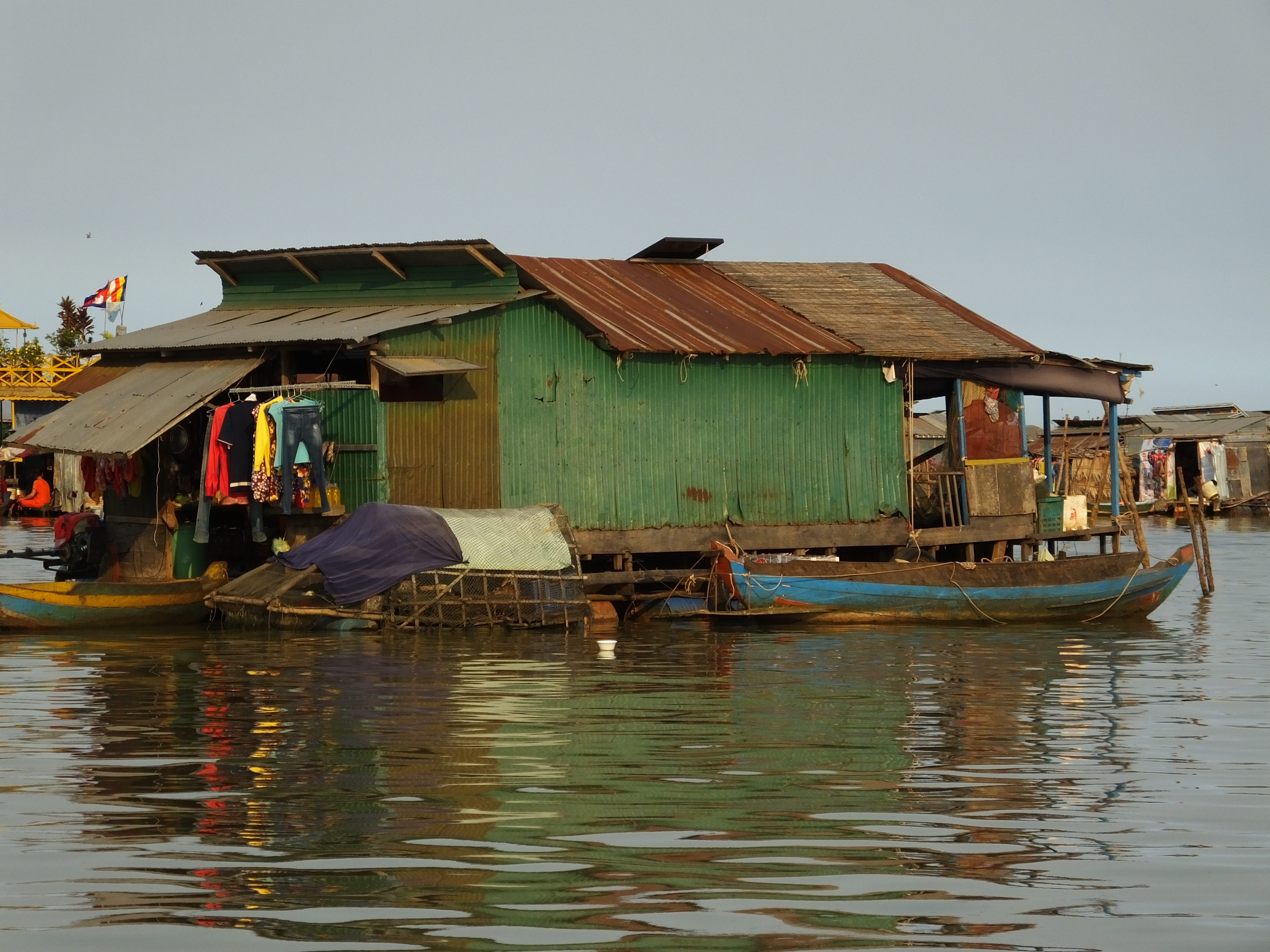 The photo below shows a man in a workshop that produces examples of typical Cambodian art. This is not tourist tat: these people are real artists who take great pride in their work. I preferred this photo to some that I took that showed faces because it exemplifies the total concentration of these fine craftsman. 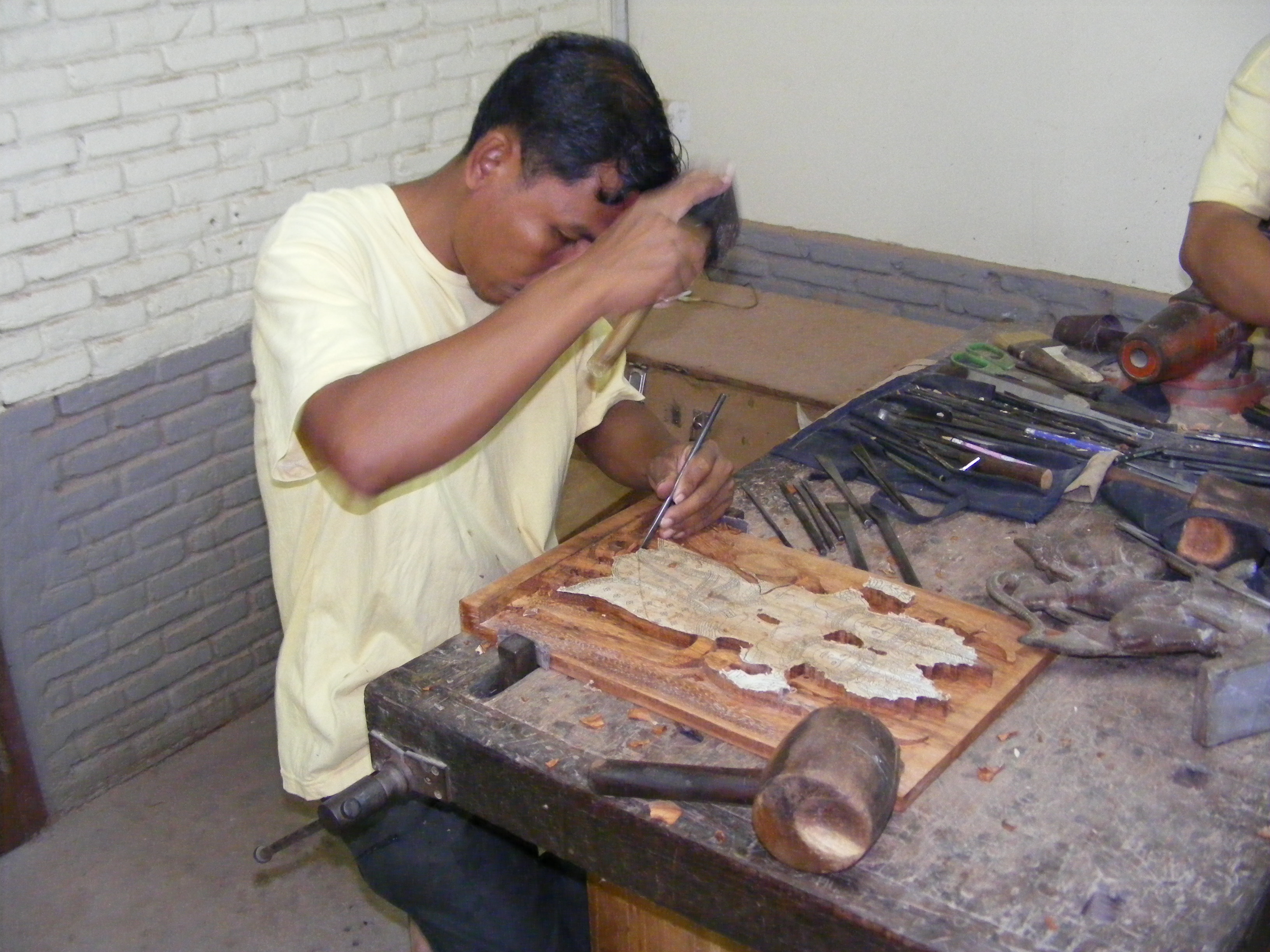 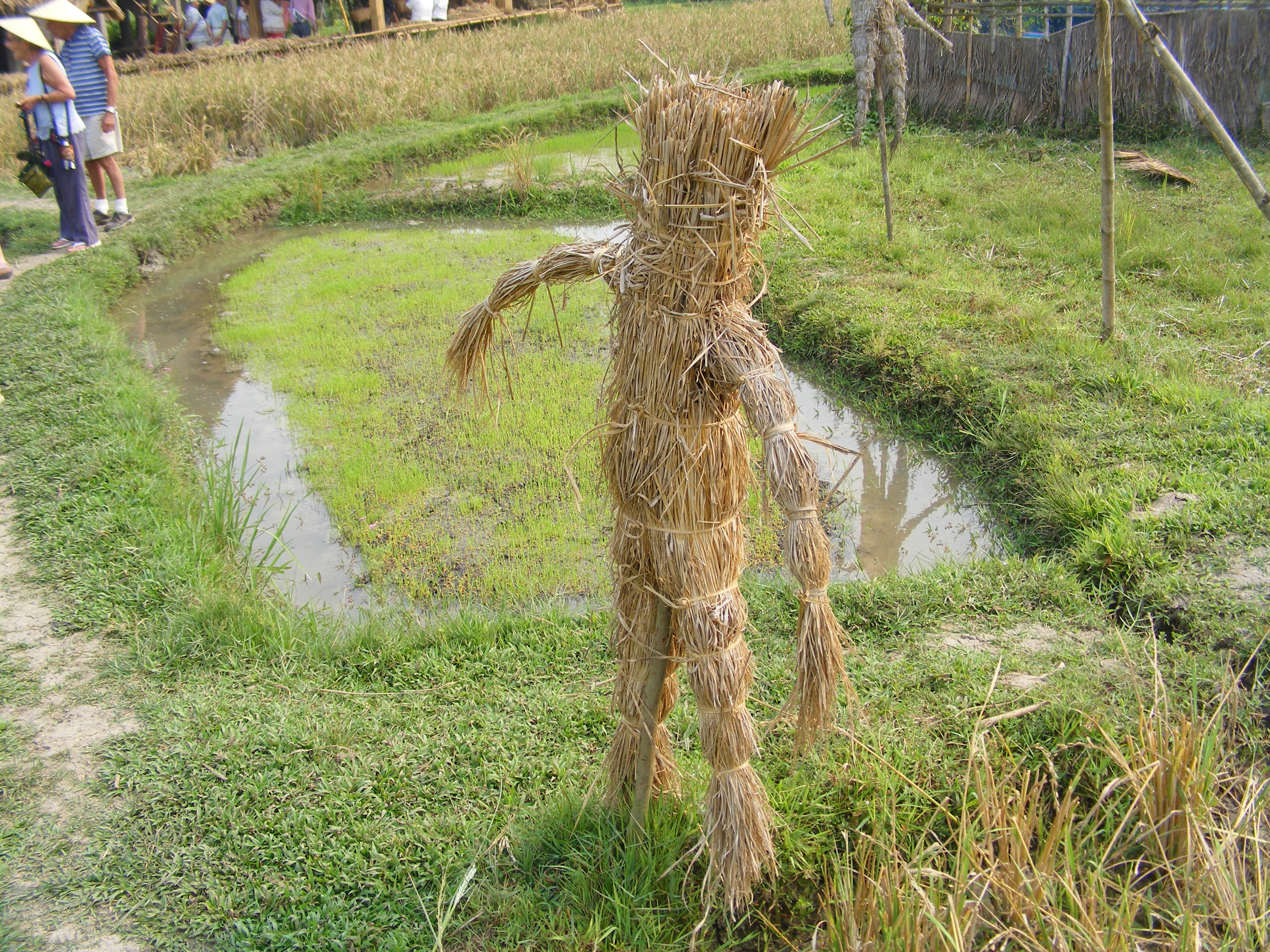 The photo below shows a water buffalo dragging a rake with huge tines to churn the paddy into mud for planting. As it shows, we were invited to take part in the fun. The man in the green shirt was our guide here, and he was outstanding: totally expert and spoke fluent English with almost no accent.(All of our local guides in all three countries were excellent.) 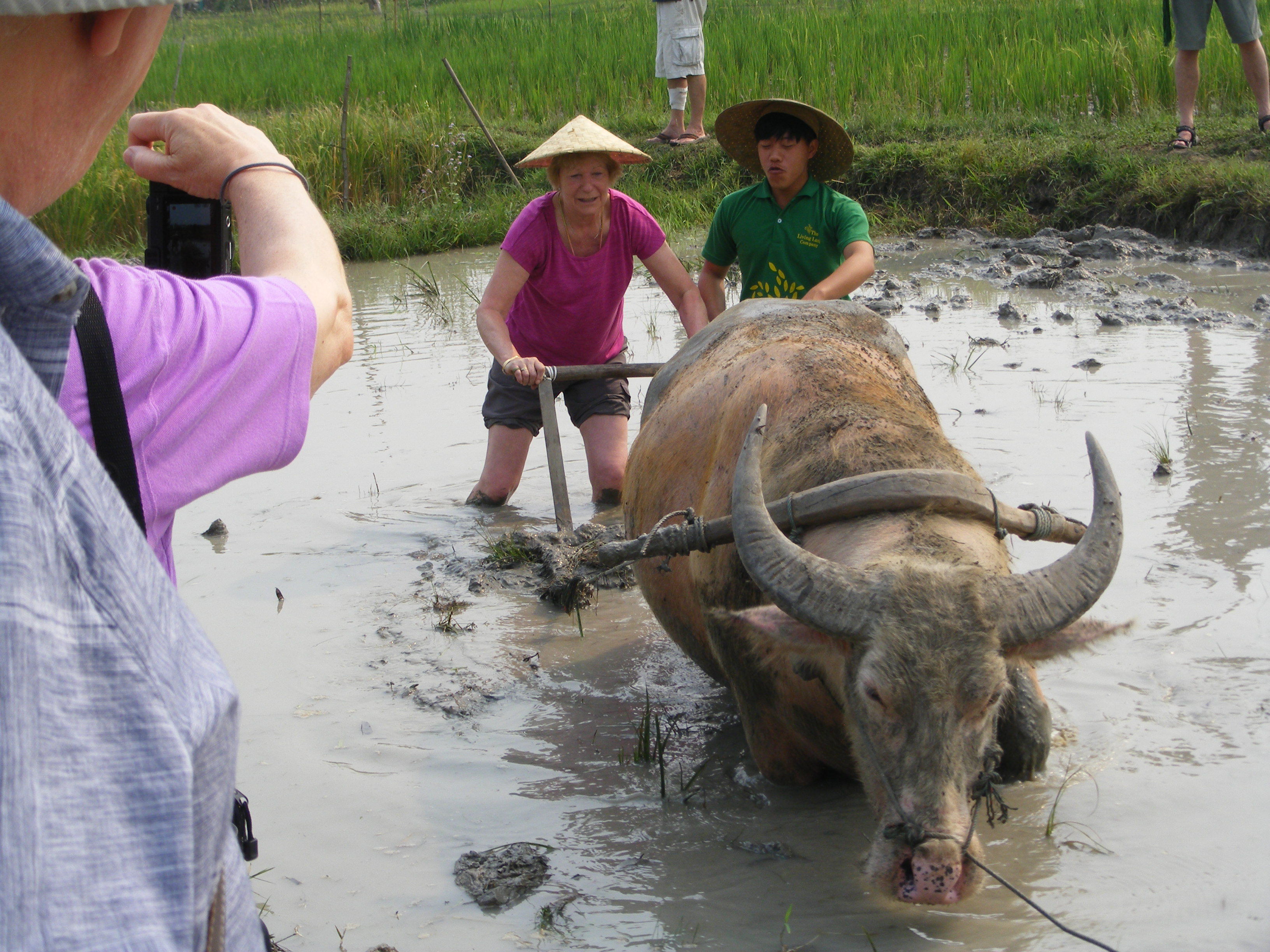 The Kuang Si waterfall comprises a series of cascades through tropical forest. Thought not particularly high or of large volume, it really is very beautiful. My photo does not do it justice. 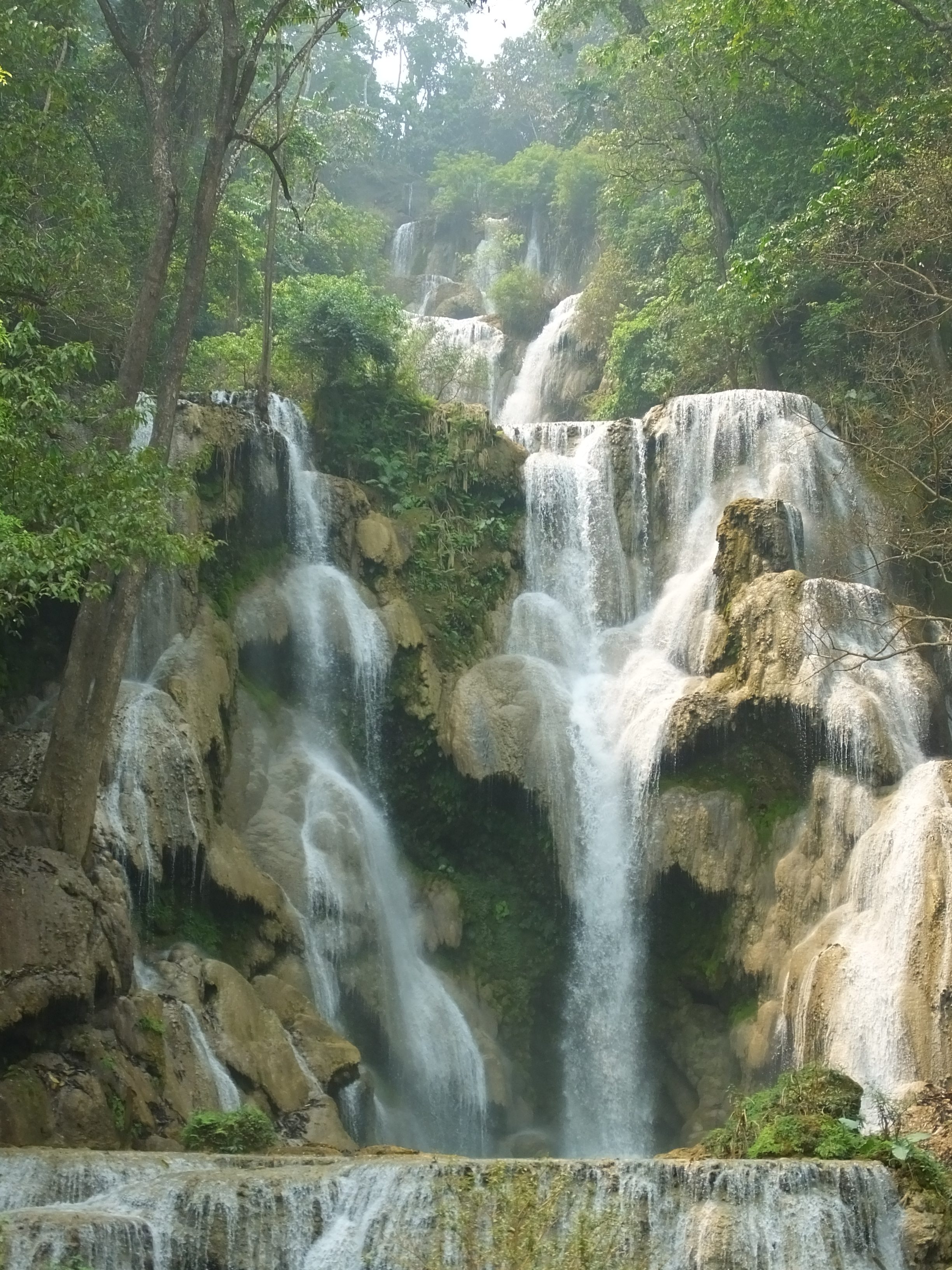 The photo below was taken in an enclosure near the bottom of the falls that houses Asiatic Black Bears (Ursus thibetanus) rescued from tiny cages where they are “milked” for their bile for use in traditional “medicine”. Many of them were captured when young, so would not thrive if released into the wild. In any case, they are extinct in the area and for hundreds of kilometres around, so there is no wild population that they could join. The enclosure is large and packed with trees and wooden structures to give full scope for their arboreal habits, so it was quite difficult to get a good photo. This was the best that I could manage. 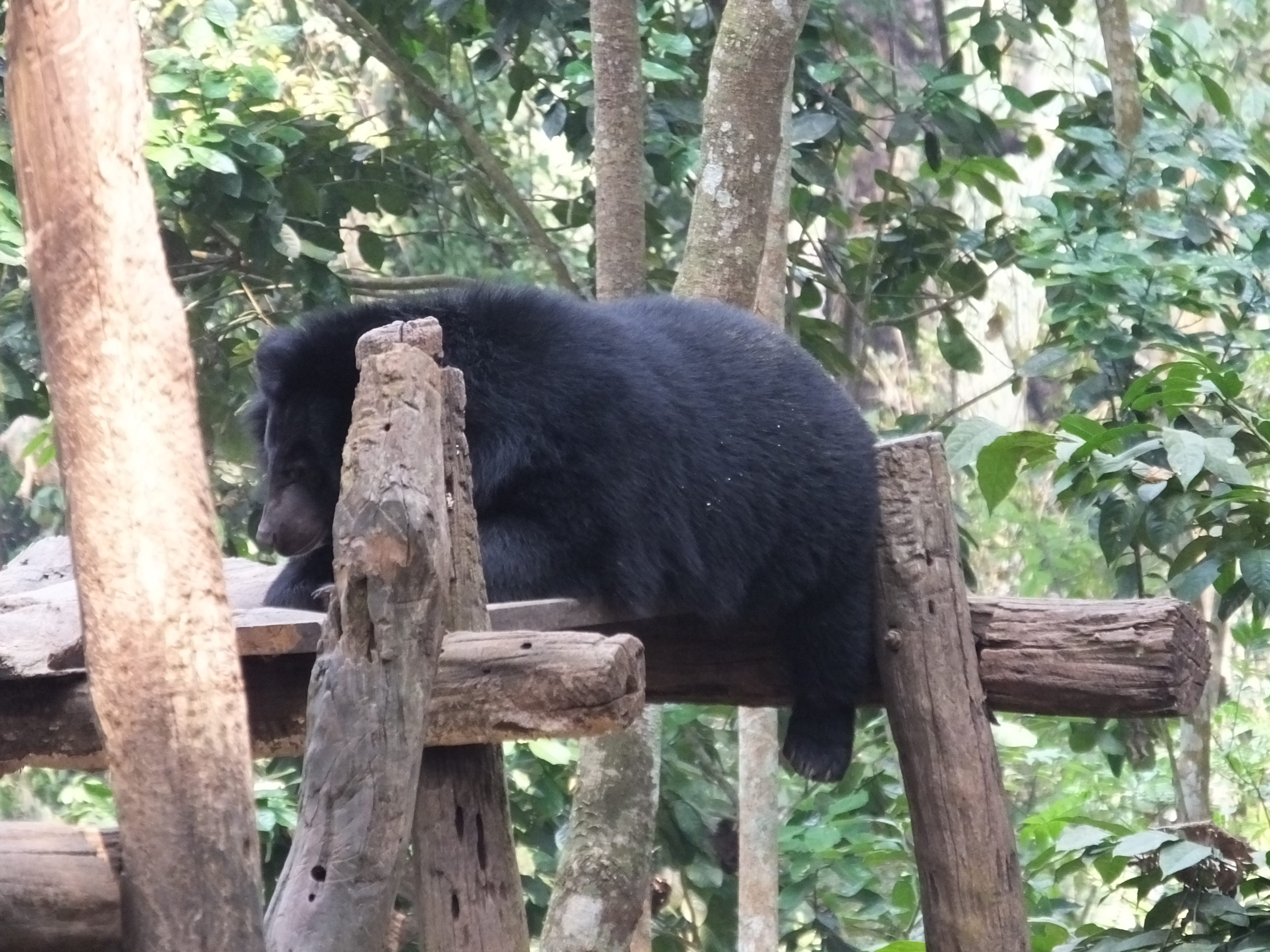 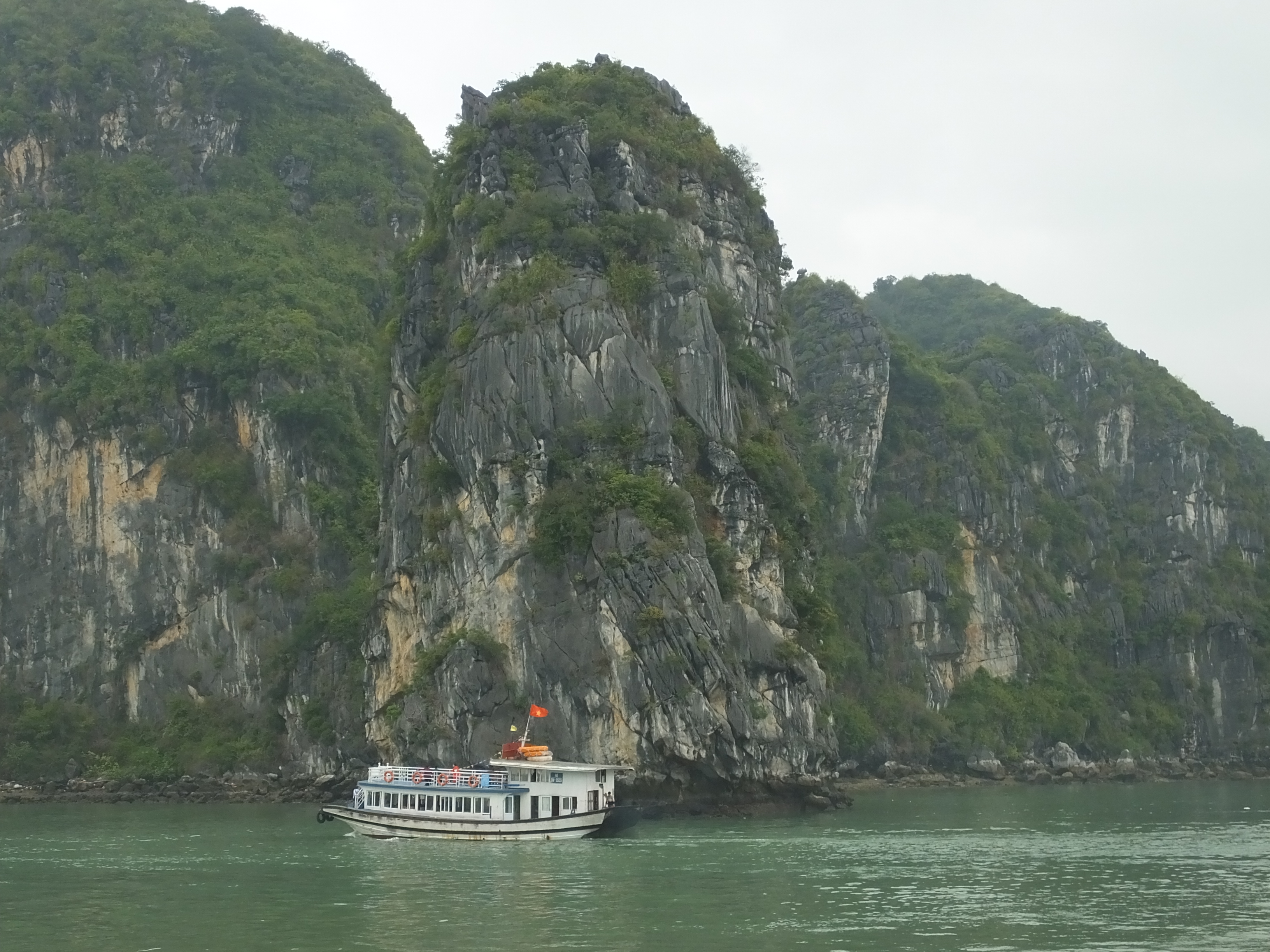 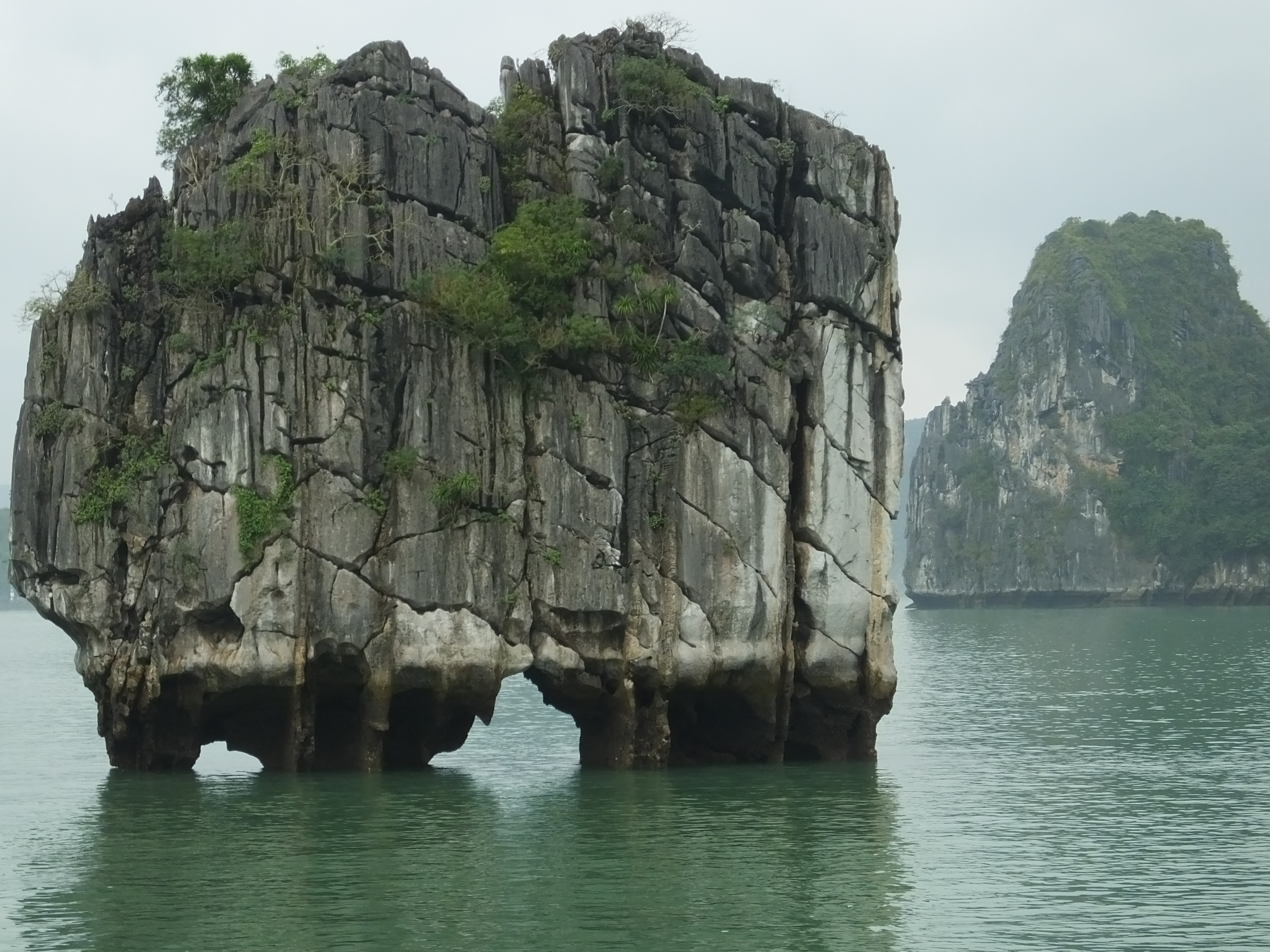 Below you see a local fishing boat. Some fishing areas are in dispute between Vietnam and China, with Chinese gunboats armed with water cannon disrupting the Vietnamese boats (according to the Vietnamese). 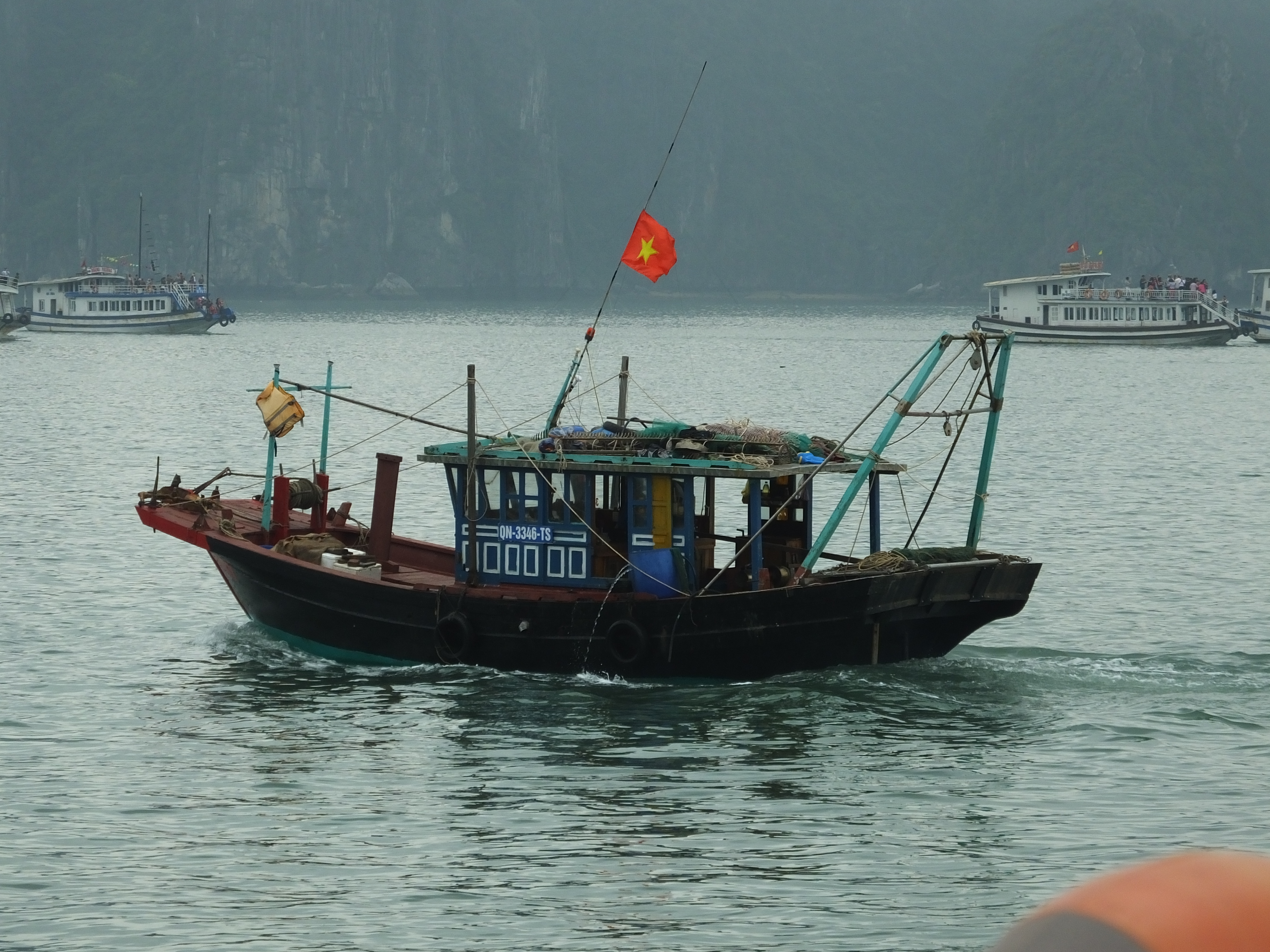 The islands are limestone, and one has a cave complex. I did not feel well enough to tackle what looked like an intimidating flight of steps, and anyway I am claustrophobic, so I stayed on the quay while the rest of the party went to the caves. After a while I noticed the boat below that turned out to be fishing litter out of the water. I suppose that anywhere popular suffers from people dropping litter (probably Chinese tourists) but such an effort to clean it up is commendable. 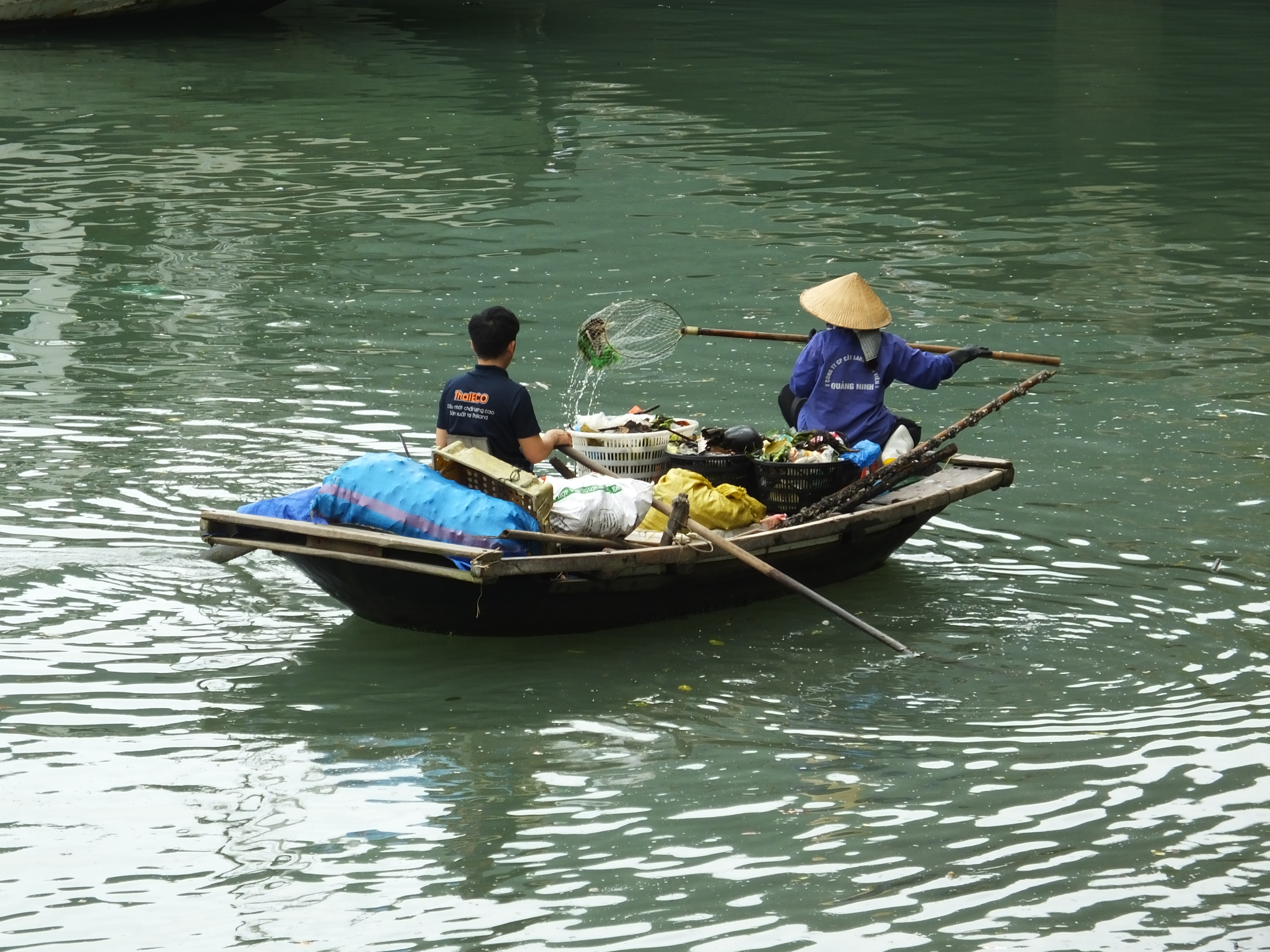