The “new” Jesus and Mo strip, called “fifth2”, is apparently a resurrection from 2008, and the website has this note:

The quote is the best bit from a very long 2006 essay by Martin Amis. You can read the first part of the essay by clicking on the screenshot below, which will take you to part two:

The entire paragraph quoted, which is Martin Amis writing from Pakistan.

Religion is sensitive ground, as well it might be. Here we walk on eggshells. Because religion is itself an eggshell. Today, in the West, there are no good excuses for religious belief – unless we think that ignorance, reaction and sentimentality are good excuses. This is of course not so in the East, where, we acknowledge, almost every living citizen in many huge and populous countries is intimately defined by religious belief. The excuses, here, are very persuasive; and we duly accept that ‘faith’ – recently and almost endearingly defined as ‘the desire for the approval of supernatural beings’ – is a world-historical force and a world-historical actor. All religions, unsurprisingly, have their terrorists, Christian, Jewish, Hindu, even Buddhist. But we are not hearing from those religions. We are hearing from Islam.

And in the cartoon, Jesus and Mo manage to disparage each other: 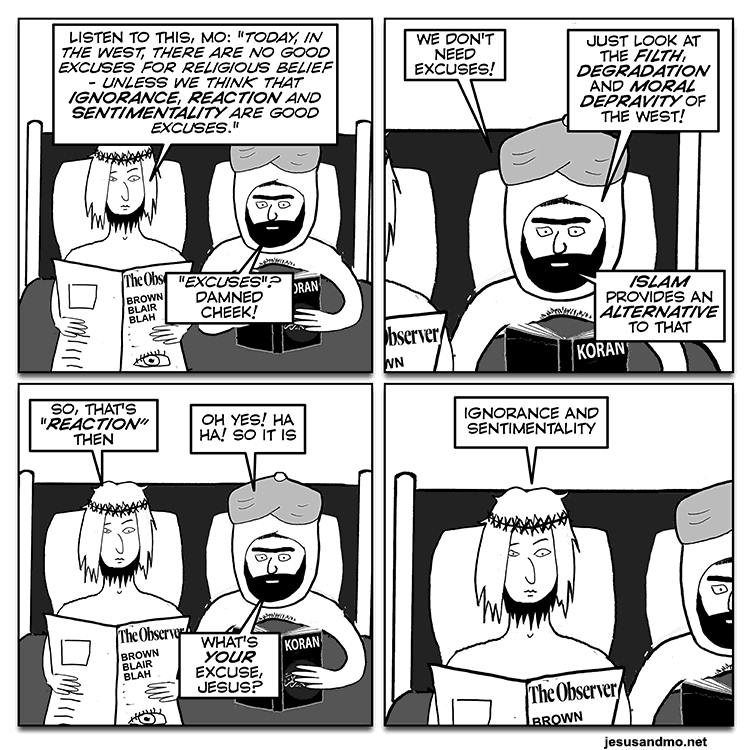