About a week ago, I posted a piece about Critical Race Theory (CRT) called “Should teaching CRT be banned?” As you know, and will see below, legislatures, all of them Republican, are in process of banning what they see as critical tenets of CRT.

My own view was that it shouldn’t be banned as I was wary about government mandating what should or should not be taught in schools. (Creationism and its variant of intelligent design are exceptions; the courts have interpreted both as forms of religion, and teaching them in public schools is thus violates the First Amendment.)  In saying that teaching CRT shouldn’t be banned but that teaching it, at least in its divisive form, was still bad, I agreed with Andrew Sullivan. There were, I thought, legal recourses against the most divisive aspects of CRT—the bits that set races against each other.  Lawsuits, I thought, could eliminate that kind of pedagogy.

I’ve had to rethink all this after I read the new article below by Richard Hanania on his Substack site (click on screenshot). In particular, I didn’t realize that governments have a perfect right to dictate what and what cannot be taught (so long as it doesn’t violate the Constitution), that they do this all the time, that mandating what can be taught also tells you what cannot be taught, and, adds Hanania, it doesn’t matter anyway because teachers, who are mostly liberals, will manage to teach what they want regardless of the law.

I can’t find much about Hanania’s politics. He seems to be a conservative but it’s not obvious, and at any rate it doesn’t matter when we’re weighing his arguments:

First Hanania presents a map showing where anti-CRT-teaching bills have been passed or are in the legislature (some states apparently are labeled for bills “with other discussions about racism”): 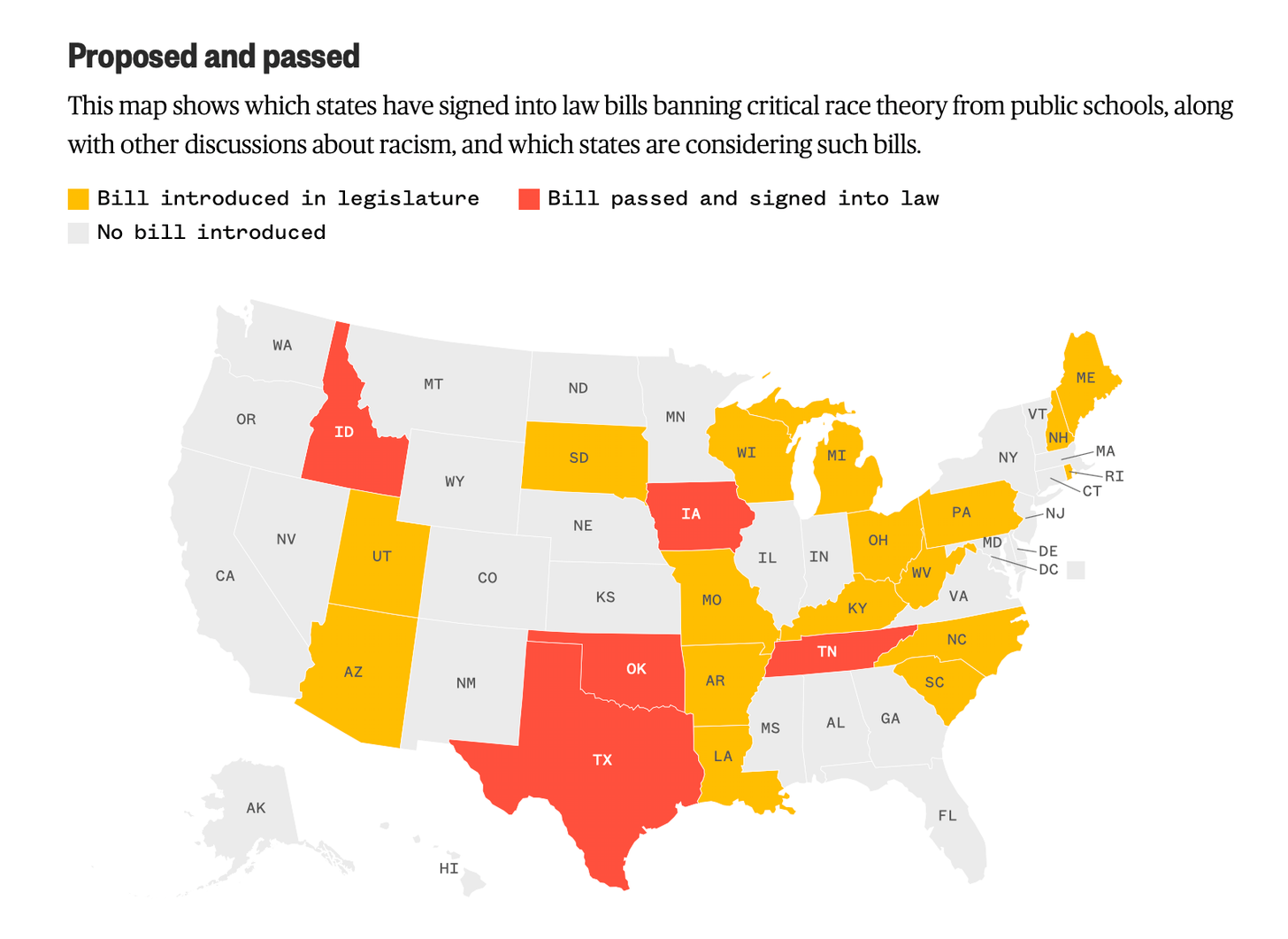 Then he makes his points, which I’ve characterized in bold (Hanania’s quotes are indented; mine are flush left):

Legislatures have a right to tell schools what and what not to teach, and they do it constantly:

Legislators tell schools what to teach and not to teach all the time. It’s sort of a basic function of government. Illinois just mandated “Asian American History” and California requires teaching of “LGBT History,” cementing the idea that American history should be understood through the lens of groups of people defined by their sexual preferences or racial characteristics (or, in the case of “Asian American History,” a made-up census category). As of 2019, California mandated “LGBTQ+ inclusive sex ed,” which includes teaching kids about newly discovered genders and sexual identities. A Vox article tells the story.

Andrew Sullivan and I are thus confused in saying that CRT shouldn’t be banned but is still wrong to teach.

Some, like Andrew Sullivan, take the position that CRT is a pernicious and false doctrine, but that legislators should nonetheless do nothing about it. I’m struck by the discrepancy between his discussion of what’s being taught and his ultimate recommendations. Here’s how Sullivan describes CRT, implying that it is psychologically damaging to children and even potentially abusive.

The goal of education of children this young is to cement the notion at the most formative age that America is at its core an oppressive racist system uniquely designed to exploit, harm, abuse, and even kill the non-white. This can be conveyed in easy terms, by training kids to see themselves first and foremost as racial avatars, and by inculcating in them a sense of their destiny as members of the oppressed or oppressor classes in the zero-sum struggle for power that is American society in 2021.

Liberals want to teach Critical Race Theory because they think it is true, while others want to ban teaching it because they think it’s false. I can understand both positions. In contrast, the position “this is all pernicious lies but nobody should do anything about it” is puzzling to me.

Okay, I’ll accept that. Decisions by legislatures or school boards about whether to teach CRT should be made on the basis of whether it’s imparting facts that are right or wrong. But there’s the rub, for classic academic CRT is not what’s being taught in these schools, but interpretations of CRT filtered through the likes of Ibram Kendi and Robin Di Angelo. Anything racially divisive I see as wrong, but to call attention to the odious history of bigotry in our country should surely be done. Both are parts of “garden variety” school CRT.

Mandating teaching a subject or viewpoint explicitly prohibits teaching the other viewpoint.

Notice that by mandating one thing, you ban another. A classroom that is required to teach gender is fluid and homosexuality should be accepted is banning traditional sexual morality. One that teaches that every major racial census category has its own history decides which groups are singled out for official identities (“Hispanic” and “AAPI,” but not “Jewish” or “Italian”), and denigrates the idea that American history should be taught from a more unified perspective.

The idea that government schools teach some things, but not others, and that a government school curriculum is set by government, has never been controversial. It’s only causing such debate now because instead of Democrats mandating that you teach identity politics and gender fluidity, it’s Republicans wanting to teach their own ideas.

Now maybe you think Critical Race Theory is true. In which case, you should oppose these bans. If you think it’s a false and harmful doctrine, then banning it is pretty much the job of government.

But of course this all depends on what aspect of CRT is being taught, and you’ll never know unless someone monitors the classroom.

This highlights what is so strange about David French and other writers arguing that if CRT discriminates against whites, that’s already illegal under the Civil Rights Act, and people can just sue. As I have pointed out, the Civil Rights Act has been interpreted to not only allow anti-white discrimination, but actually mandate it in the form of affirmative action. As it turns out, people interested in enforcing civil rights law think discrimination against blacks is a major problem society has to constantly be on guard against, while discrimination against whites isn’t really a thing.

And of course to stop CRT teaching with lawsuits is a piecemeal effort, state by state, that may ultimately wind up in the Supreme Court; and you know what that means.

A 2017 survey of school teachers and education bureaucrats showed that they voted for Hillary over Trump, 50% to 29%. That’s actually not as lopsided as I would have guessed, but there’s evidence that Democratic teachers are more committed to politics than Republican teachers, just as liberals care more about politics more generally. In 2020, educators who donated money to a presidential campaign were six times more likely to support Biden than Trump. So while Democrats may have “only” a 21-point lead in voting preferences among educators, when it comes to those who care more about politics, it’s more like an 85%-15% advantage. And teachers are probably conservative compared to the kinds of people who write textbooks, design curriculums, and work in education departments.

With those kinds of numbers, there’s really nothing conservatives can do to make the schools friendlier to their ideas and values. A CRT ban might mean a teacher won’t say “Ok, kids, today we’re going to learn about Critical Race Theory!,” but they’ll still teach variations of the same ideas.

The solution? Send your kid to private schools, or homeschool them, as such schooling is either generally more conservative or, at home, you can teach your kids what you want. It’s this solution that makes me think that Hanania is a conservative. He notes, though that private school enrollment has dropped in grades 1-8 and 9-12, as it’s expensive, but homeschooling has nearly doubled in the last two decades: 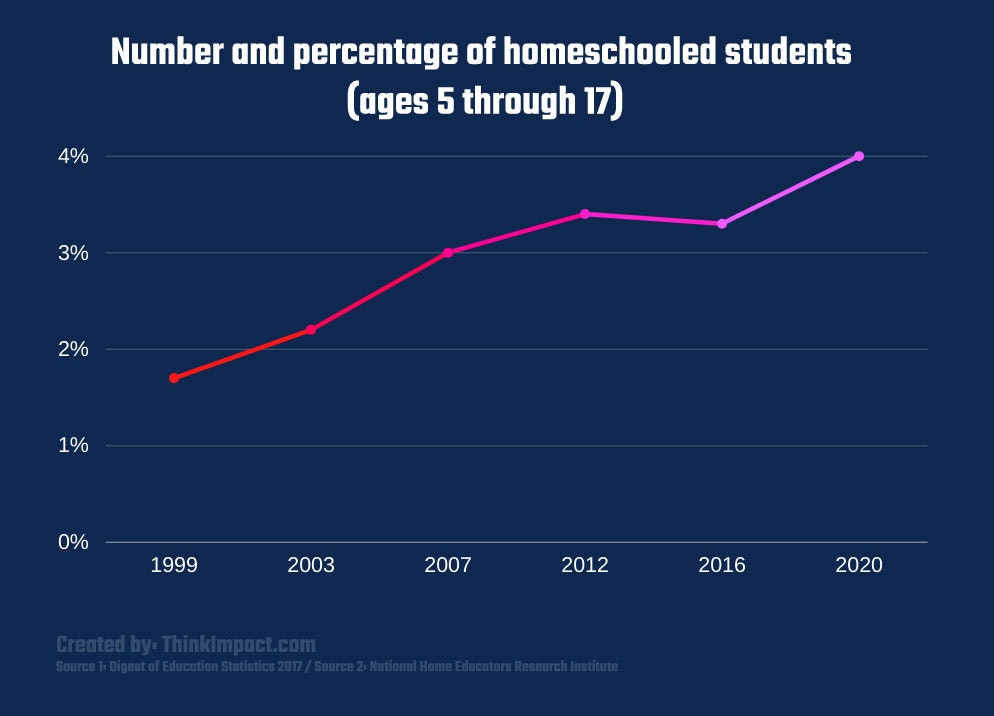 On the conservatism of private schools:

In the end, Hanania’s solution, if you’re worried about CRT being taught more widely, is to put private schools on a more equal footing with public ones, perhaps using school vouchers to avoid the expense. That, of course, is not a solution I recommend, as I’m a big fan of public schools. And his solution is sure to sicken other liberals. But at least, says Hanania, it is a kind of solution, and nobody has offered any thing else that’s likely to stem the teaching of CRT. Hanania ends this way:

But those who hope to change the public schools have no plan to make an overwhelmingly left-wing, and increasingly radicalized, profession reflect their preferences and values.

Trust me, I like finding new and original ideas to promote, and hate to come out for such a conventional and boring suggestion like “more school choice,” although I at least take comfort in the fact that I took an unconventional path to get to that conclusion. Nonetheless, please try not to judge the idea based on how edgy it sounds, but based on a clear understanding of how the world actually works.

My solution? Oppose the teaching on the grounds that much of it is false and it also has a pernicious effect on schoolchildren

54 thoughts on “Once again, should teaching CRT be banned? Richard Hanania says it won’t work, but offers another solution that liberals won’t like”