There are as many interpretations of Critical Race Theory (CRT) as there are interpreters, and while I agree with its motivation (equality of opportunity), and with some of the tenets I see in it (e.g., the pressing need to fix inequalities that began with slavery and bigotry centuries ago, or the need to call out clear instances of racism), I disagree with others (e.g., the ideas that all whites are infused with subconscious bias and the Kendi-an notion that inequality of proportions automatically implies bigotry). But it’s one thing to disagree with some aspects of a theory, and another to ban its teaching altogether.

And that’s what many states are doing now: banning the teaching of CRT or of their interpretations of what it says. These initiatives are nearly all, as far as I can see, from Republicans, though some liberal parents are opposed to teaching the more divisive aspects of CRT in secondary schools. The New York Times op-ed below asserts (correctly, I think) that banning the teaching of CRT or its perceived principles in secondary schools is “un-American”. The authors identify themselves as a libertarian (Kmele Foster), a progressive (Thomas Chatterton Williams, I think), a moderate (Jason Stanley, I think), and a conservative (David French).

And they agree, as do I, that these laws are, in effect, censorship, for they ban the promulgation of ideas because those ideas could make students uncomfortable. Read on, and click on the screenshot: 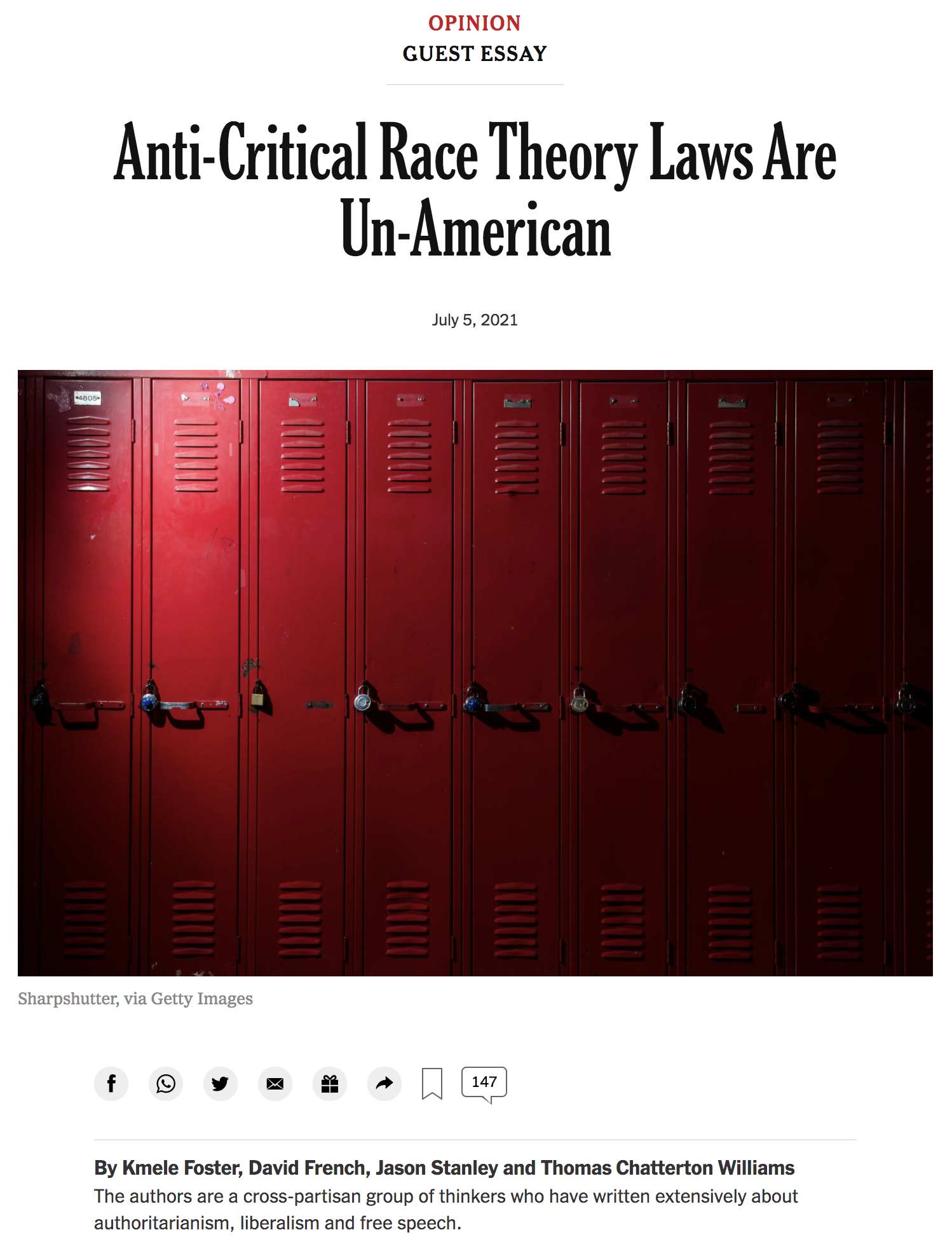 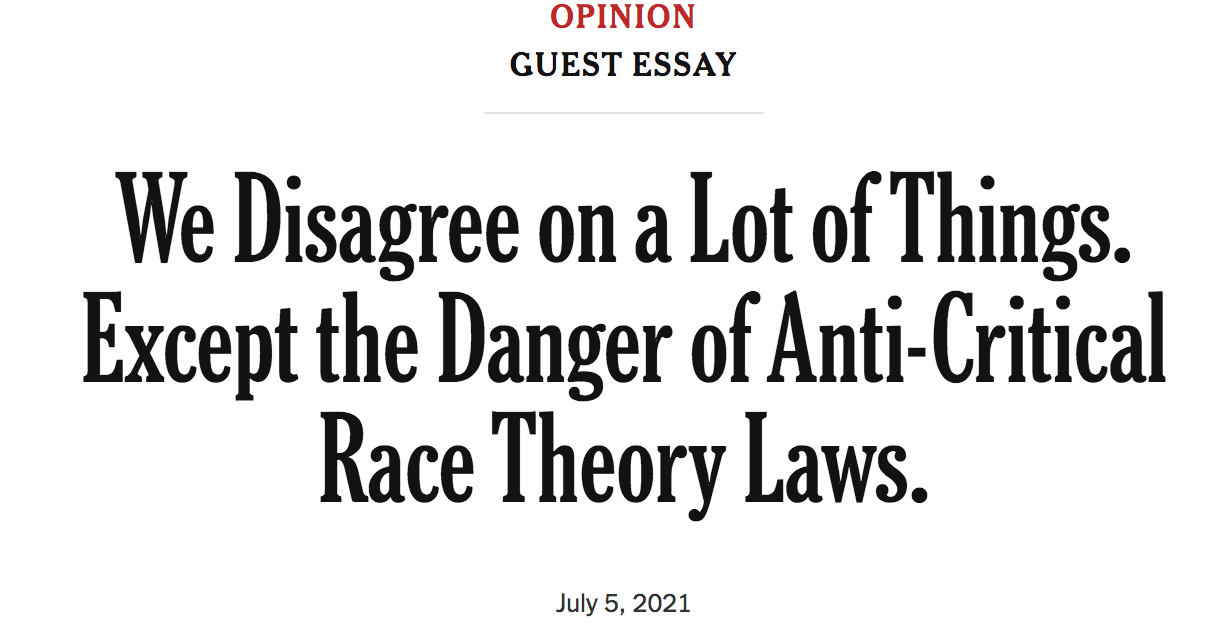 Here’s how the authors describe some of the new laws:

In recent weeks, Tennessee, Oklahoma, Iowa, Idaho and Texas have all passed legislation that places significant restrictions on what can be taught in public school classrooms, and in some cases, public universities, too.

Tennessee House Bill SB 0623, for example, bans any teaching that could lead an individual to “feel discomfort, guilt, anguish or another form of psychological distress solely because of the individual’s race or sex.” In addition to this vague proscription, it restricts teaching that leads to “division between, or resentment of, a race, sex, religion, creed, nonviolent political affiliation, social class or class of people.”

Texas House Bill 3979 goes further, forbidding teaching that “slavery and racism are anything other than deviations from, betrayals of, or failures to live up to, the authentic founding principles of the United States.” It also bars any classroom from requiring “an understanding of the 1619 Project” — The New York Times Magazine’s special issue devoted to a reframing of the nation’s founding — and hence prohibits assigning any part of it as required reading.

Right off the bat you can see problems with the laws. Teaching evolution, geology, Western medicine, or any fact that contradicts the Bible or Qur’an, for instance, could cause resentment by religious people (but see below). Emphasizing the degree of economic inequality among Americans could make those in the upper classes uncomfortable.

As for Texas’s law, what the “authentic founding principles” of the United States are could be seen as racist in part. Even at the Constitutional Convention the “founders” determined that each slave would count as only 3/5 of a person for purposes of taxation and representatives.  The Constitution and Declaration of Independence do not condemn slavery, and tacitly accept it (Constitutional amendments and later legal clarifications fixed that.) The ringing words of Jefferson’s Declaration of Independence, “We hold these truths to be self-evident, that all men are created equal, that they are endowed by their Creator with certain unalienable Rights, that among these are Life, Liberty and the Pursuit of Happiness,” could be said to have been violated right off the bat.

No, not all men were seen as “created equal” nor endowed with even the same basic rights. These things should be taught in American history classes. I would not, of course, go so far as the 1619’s projects assertion that slavery was intentionally baked into the founding documents from the outset, nor would I want an ideologically slanted newspaper like the NYT determining how our children are taught history.

As the authors note, any teaching of American history in an honest way will make people uncomfortable. How can you teach about slavery, about the ripping apart of African families and forced servitude under horrible conditions, without making people uncomfortable? How can you teach about the extirpation of Native Americans without making people uncomfortable? As our former University President Hannah Gray said, “Education should not be intended to make people comfortable, it is meant to make them think.” That was intended for college students, but should also apply, in a more diluted form, in secondary schools.

Of course there are things that I wouldn’t want taught in classrooms: divisive practices like demonizing white children or telling them that they’re all racists, or accepting the 1619 Project’s claim that the Revolutionary War was fought to preserve slavery. But I prefer to leave these matters to the judgments of school districts and teachers than to legislatures.

The authors point out the necessarily fraught nature of teaching history in America, but object to the new laws on two further grounds, and with these I also agree:

a.) The laws are imprecise. I quote:

Because these laws often aim to protecting the feelings of hypothetical children, they are dangerously imprecise. State governments exercise a high degree of lawful control over K-12 curriculum. But broad, vague laws violate due process and fundamental fairness because they don’t give the teachers fair warning of what’s prohibited. For example, the Tennessee statute prohibits a public school from including in a course of instruction any “concept” that promotes “division between, or resentment of” a “creed.” Would a teacher be violating the law if they express the opinion that the creeds of Stalinism or Nazism were evil?

Other laws appear to potentially ban even expression as benign as support for affirmative action, but it’s far from clear. In fact, shortly after Texas passed its purported ban on critical race theory, the Texas Public Policy Foundation, a conservative think tank, published a list of words and concepts that help “identify critical race theory in the classroom.” The list included terms such as “social justice,” “colonialism” and “identity.” Applying these same standards to colleges or private institutions would be flatly unconstitutional.

b.) The laws amount to censorship. By banning the teaching of ideas or even the use of specific words (see the Texas think tank’s recommendations above), these laws violate the First Amendment, which applies to all public schools. To quote again:

These laws threaten the basic purpose of a historical education in a liberal democracy. But censorship is the wrong approach even to the concepts that are the intended targets of these laws.

. . . . Let’s not mince words about these laws. They are speech codes. They seek to change public education by banning the expression of ideas. Even if this censorship is legal in the narrow context of public primary and secondary education, it is antithetical to educating students in the culture of American free expression.

With such politically motivated control of school curricula, American education is at the mercy of the ideologies and political view of those in power. And those powers will change over time. We cannot allow this to happen.

So why can’t legislatures ban the teaching of evolution because it makes religious children uncomfortable as well?  Well, the government does retain certain rights to ensure that subjects are taught “properly”. That’s why both federal appellate courts and the Supreme Courts have declared the teaching of creationism and intelligent design illegal, for they are considered religious doctrine: teaching them violates the First Amendment.

CRT does not do that. Certain aspects of CRT violate principles of fair and objective teaching, but not the Constitution itself.

So what do the authors propose to do, then, given that CRT is already being taught, and, as we know, often in invidious and divisive ways that even liberal parents find objectionable?  And this is where the authors offer weak tea as a solution:

A wiser response to problematic elements of what is being labeled critical race theory would be twofold: propose better curriculums and enforce existing civil rights laws. Title VI and Title VII of the Civil Rights Act both prohibit discrimination on the basis of race, and they are rooted in a considerable body of case law that provides administrators with far more concrete guidance on how to proceed. In fact, there is already an Education Department Office of Civil Rights complaint and federal lawsuit aimed at programs that allegedly attempt to place students or teachers into racial “affinity groups.”

But “proposing better curriculums” won’t solve the problem unless you specify what you mean by “better”. Even liberal high schools have constructed curriculums (curricula?) that I consider propagandistic and divisive. People are not going to unite behind any one curriculum, as each group has its own agenda.

As for enforcing civil rights laws, that’s already being done, and perhaps will solve some of the problems associated with teaching about ethnic groups, like creating “affinity groups” that, as the authors imply, could be construed as illegal. But in the end, it will be hard for people to agree, given the Zeitgeist, how our kids should be taught history.

I have no solutions, but I know that no solution should involve government mandates about what can and cannot be taught if such matters don’t violate the Constitution. I’d rather trust teachers, school boards, and parents than to trust the government. In that way the process at least becomes a bit more democratic.

But perhaps you feel differently, and this is the place to discuss the new anti-CRT laws.

65 thoughts on “Should teaching CRT be banned?”