In this week’s installment of The Weekly Dish, Andrew Sullivan has a very good piece on Critical Race Theory (CRT; click on screenshot below, though you may have to be a subscriber to read it). I’d urge you to subscribe, as it’s only $50 a year—less than a dollar a week. 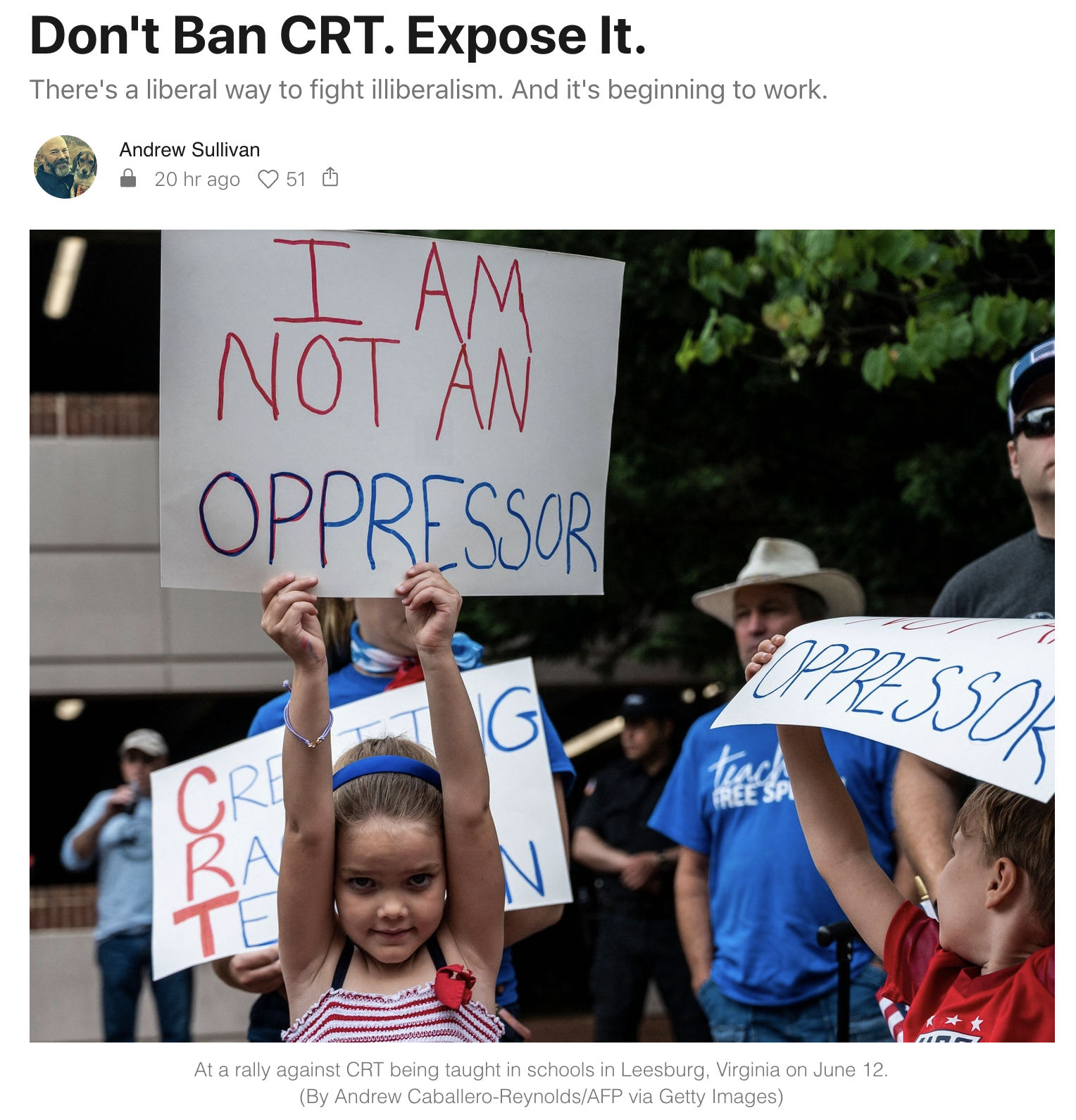 In the piece, Sullivan has a number of theses (direct quotes are indented):

1.) The media’s characterization of opposition to CRT (and laws against it) as a Republican plot to discredit Democrats is partly wrong. Yes, the “laws” being passed to ban the teaching of CRT are mostly a Republican initiative, but opposition to teaching CRT goes across the political spectrum, including many liberals.

I’m sure the MSM will continue to push this narrative indefinitely. They are still insisting, after all, that “white supremacy” is behind hateful attacks on Asian-Americans, and that soaring murder rates are purely a function of Covid19. And you can see why: this dismissive take is extremely helpful in avoiding what is actually happening. It diverts attention from the stories and leaks and documents that keep popping up all over the place about extraordinary indoctrination sessions that have become mandatory for children as early as kindergarten.

2.) CRT as taught in schools is not the academic version, but is injurious nevertheless, as it simply dumbs down the theses of “big time CRT” as presented by scholars like Crenshaw and Kendi. It is more than just shining a light on American racism.

And no, 6-year-olds are not being taught Derrick Bell — or forced to read Judith Butler, or God help them, Kimberlé Crenshaw. Of course they aren’t — and I don’t know anyone who says they are.

But they are being taught popularized terms, new words, and a whole new epistemology that is directly downstream of academic critical theory. Ibram X. Kendi even has an AntiRacist Baby Picture Book so you can indoctrinate your child into the evil of whiteness as soon as she or he can gurgle. It’s a little hard to argue that CRT is not interested in indoctrinating kids when its chief proponent in the US has a kiddy book on the market.

The goal of education of children this young is to cement the notion at the most formative age that America is at its core an oppressive racist system uniquely designed to exploit, harm, abuse, and even kill the non-white. This can be conveyed in easy terms, by training kids to see themselves first and foremost as racial avatars, and by inculcating in them a sense of their destiny as members of the oppressed or oppressor classes in the zero-sum struggle for power that is American society in 2021. 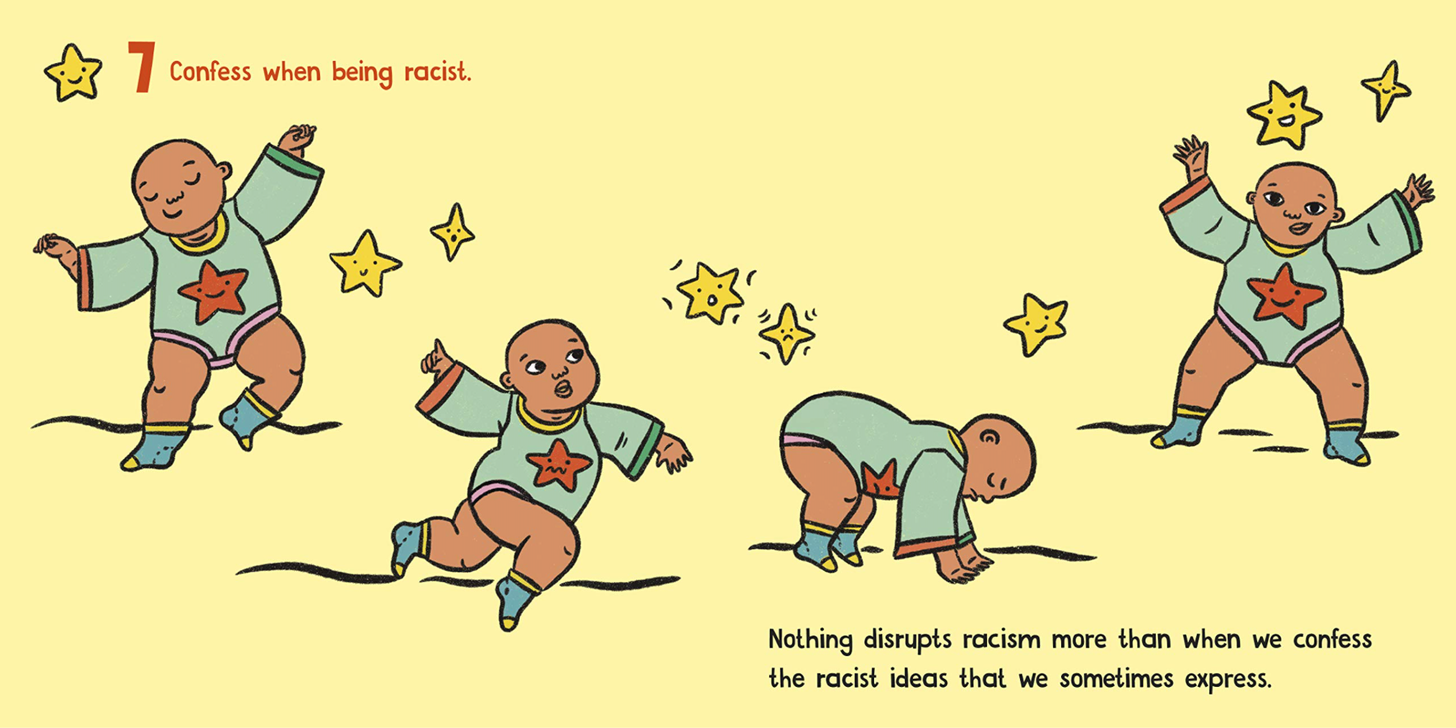 3.) There’s nothing wrong with beefing up school curricula to teach more about America’s odious history of racism.

The legacy of this country’s profound racism, the deep and abiding shame of its genocidal slavocracy, the atrocities, such as Tulsa, which have been white-washed, the appalling record of lynchings and beatings, the centrality of African-Americans to the story and success of this country: all this must be better explored and understood. There is nothing wrong and a huge amount right about black scholars taking the lead in shining light on what others might miss, building on past knowledge, helping us better account for it. White scholars, like the hundreds of thousands of white citizens who gave their lives to end slavery, have a crucial role to play as well.

4.) But there should not be laws either mandating or forbidding the teaching of CRT in the classroom. However, if taught, it should be presented as just one of several sociological theories. But mandating or banning its teaching is doing exactly what liberals don’t want: inhibiting free speech:

The question is: what can a liberal society do when almost all of its educational, media, business and cultural elites have adopted an ideology that believes that liberal society needs to be dismantled? And the answer is: not much. Liberalism assumes that bad and noxious ideas will eventually be driven out by better ones. Banning illiberal ideologies like CRT makes us indistinguishable from the woke — who would ban any speech they didn’t like if they could get rid of the First Amendment (just look at what “liberals” are doing in Canada or Britain, for example, where they lock people up for resisting this ideology). Replacing CRT with crude, jingoistic versions of history or society is no answer either.

Many of the bills attempting to ban CRT in public schools are well-intentioned and do not, in fact, ban CRT. But they contain wording to constrain the kind of teaching that is built on CRT that is far too vague, could constrain speech in countless unforeseen ways, and are pretty close to unenforceable. (When people are proposing body-cameras for teachers, you know they’ve gone off the edge.) Most of these bills, to make things worse, strike me as unconstitutional. And they cede the higher ground.

5.) CRT itself is bad for kids because it promotes authoritarianism rather than liberalism.

And it’s vital for the rest of us to understand that these kinds of lessons are directly downstream of an ideology that, according to an early Critical Race Theory text, “questions the very foundations of the liberal order, including equality theory, legal reasoning, Enlightenment rationalism and neutral principles of Constitutional law.” For these reasons, CRT insists that what we have always understood as liberal education is, in fact, a lie, because liberalism assumes that we are all individuals, capable of reasoning with each other as equals, where, in fact, we are mere representatives of racial constructs which are part of a permanent struggle between the oppressors (white) and oppressed (non-white).

This is not teaching about critical race theory; it is teaching in critical race theory. And it is compulsory and often hidden from parents. It contradicts the core foundations of our liberal society; and is presented not as one truth to be contrasted with others, but as the truth, the basis on which all other truths are built. That’s why teaching based on CRT will make children see themselves racially from the get-go, why it will separate them into different racial groups, why it will compel white kids to internalize their complicity in evil, tell black kids that all their troubles are a function of white people, banish objective measurements of success to avoid stigmatizing failure, and treat children of different races differently in a classically racist hierarchy.

And this is why — crucially — it will suppress any other way of seeing the world — because any other way, by definition, is merely perpetuating oppression. As Kendi constantly reminds us, it is either/or. An antiracist cannot exist with a liberalism that perpetuates racism. And it’s always the liberalism that has to go.

6.) Rather than trying to pass Trumpian laws and dictates banning the teaching of CRT, Sullivan recommends that we must fight the theory because it defies liberalism, for CRT “is committed in its foundational texts to the overthrow of liberalism.”

It’s not just a culture war gambit. It’s a deep defense of our liberal inheritance. Once a generation grows up believing that there is no such thing as reason — just “white thinking” and “black thinking”; once it grows up believing that free speech is a device for oppression not liberation; once it sees our founding documents as cynical lies to perpetuate slavery and “white supremacy”; once it believes that no progress has ever been made in race relations, because the “systems” sustain unaltered “white supremacy” for ever, then we have detonated the foundations of a free society.

And we should remember that CRT is adhered to by only a minority of Americans: Sullivan quotes a YouGov poll showing that Americans oppose CRT by 58% to 38%, with 53% having a “very unfavorable view of it.”

Overall, this is a measured, well written, and convincing piece. We all know that CRT is far more than just a way to call attention to past and present racism, which is an admirable effort. Instead, it is a divisive ideology—John McWhorter would call it a theology—that tears America apart rather bringing it together, and is explicitly designed to be not only untestable, but also to stifle all discussion about it.

20 thoughts on “Andrew Sullivan on why we shouldn’t ban the teaching of CRT, but why it’s bad to teach it”