Today’s Jesus and Mo strip, called “unwary,” is about “forced teaming”. But what is it? This list of manipulations tells you:

De Becker calls forced teaming one of the most sophisticated manipulations.

You can clearly identify it when a stranger conjures a shared experience with you where none exists by using the pronouns “we” and “us” in phrases like “Now we’ve done it” or “We’re some team.”

Criminals use it to get closer to their victims by creating the illusion that you’re both in the same boat. Moreover, most people are reluctant to deflect forced teaming because it’s difficult to do so without seeming rude. This only adds to the criminal’s advantage.

The artist also gives the Wiktionary link to another definition:

The situation where an abuser attempts to forge a bond with their victim by implying that they have something in common or are in a shared predicament.

And of course they demonstrate exactly what they’re decrying: 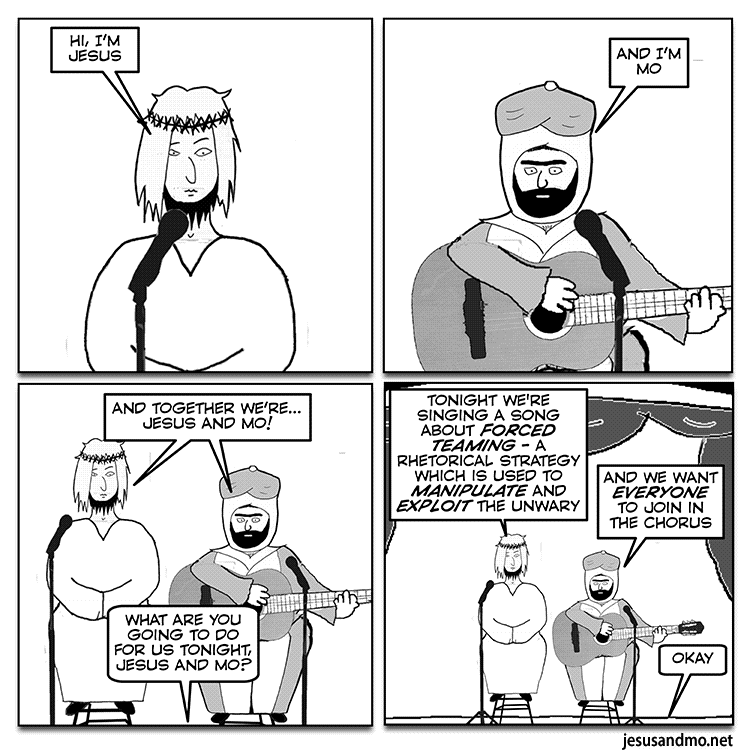 Today’s Jesus and Mo strip, called “popes”, is about the legacy and demise of ex-Pope Ratzinger (Benedict XVI).  What surprised me about the reaction to Ratzinger’s death is how much he was lauded in the mainstream media—as if everyone had forgotten that he covered up the Church’s child-abuse scandal earlier in his career.

He wasn’t a horrible Pope, but he wasn’t a good one, either. But as the artist notes below, there’s no such thing as a good Pope. All Popes are head of a worldwide organization that foists delusions upon its members, extorts them, terrorizes its young folk with talk of hell (and acts of sexual abuse), and prefers AIDS to condoms. 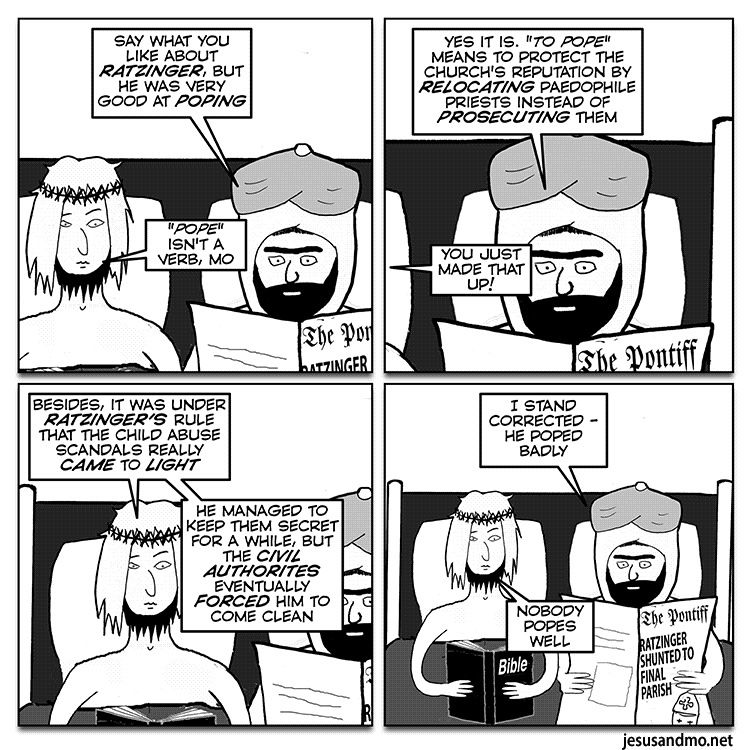 Today’s Jesus and Mo strip, called “cube,” came with this note (and an admission that the strip is late to the party):

Provoked by this ridiculous story that appeared in December last year.

The story, of course, is about how the instructor at Hamhanded University (really Hamline U.) was fire for showing two paintings depicting the face and figure of Muhammad, even after giving trigger warnings in the syllabus an in class. On to J&M, in which Mo carefully explains to his pal why you can’t draw pictures of Muhammad. (Note that the strip’s artist does—four times in this strip alone!)

Hamline is not pleased, I gather, with the small Minnesota school having received national attention for this kind of censorship and the reprehensible firing of a teacher. 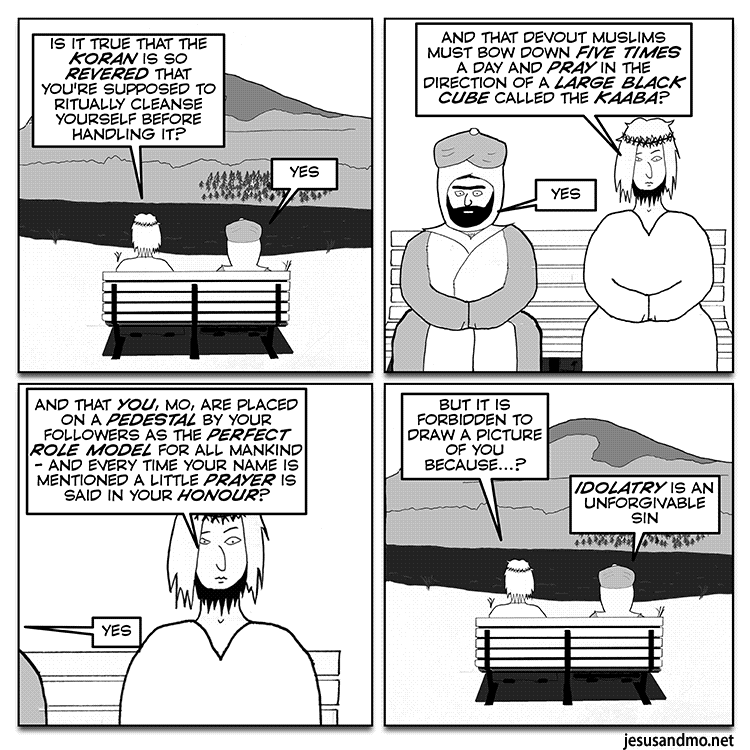 Today’s Jesus and Mo strip, called “Impulse”, is unusual because it doesn’t say bupkes about religion. It’s a groaner! 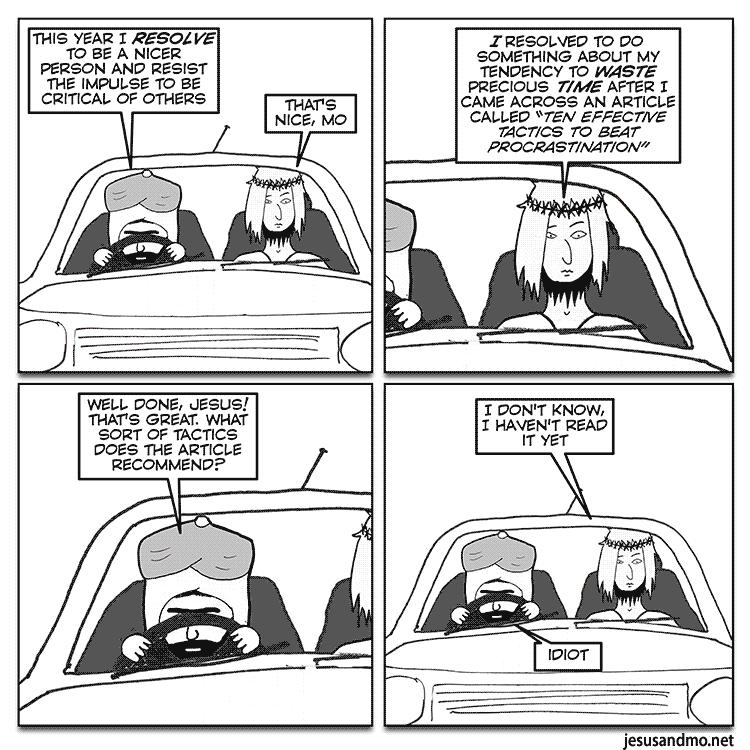 This joke was actually made by Mohammed himself, as recorded in Sahih Bukhari 304 . Thanks, Mo!

This is from the link to this collection of the hadith, compiled around 846 A.D.

Once Allah’s Messenger (ﷺ) went out to the Musalla (to offer the prayer) of `Id-al-Adha or Al-Fitr prayer. Then he passed by the women and said, “O women! Give alms, as I have seen that the majority of the dwellers of Hell-fire were you (women).” They asked, “Why is it so, O Allah’s Messenger (ﷺ) ?” He replied, “You curse frequently and are ungrateful to your husbands. I have not seen anyone more deficient in intelligence and religion than you. A cautious sensible man could be led astray by some of you.” The women asked, “O Allah’s Messenger! What is deficient in our intelligence and religion?” He said, “Is not the evidence of two women equal to the witness of one man?” They replied in the affirmative. He said, “This is the deficiency in her intelligence. Isn’t it true that a woman can neither pray nor fast during her menses?” The women replied in the affirmative. He said, “This is the deficiency in her religion.”

Remember that when you’re arguing with a Muslim about their beliefs.

Here Mo proclaims himself infallible (or “inflammable,” as Archie Bunker might say: 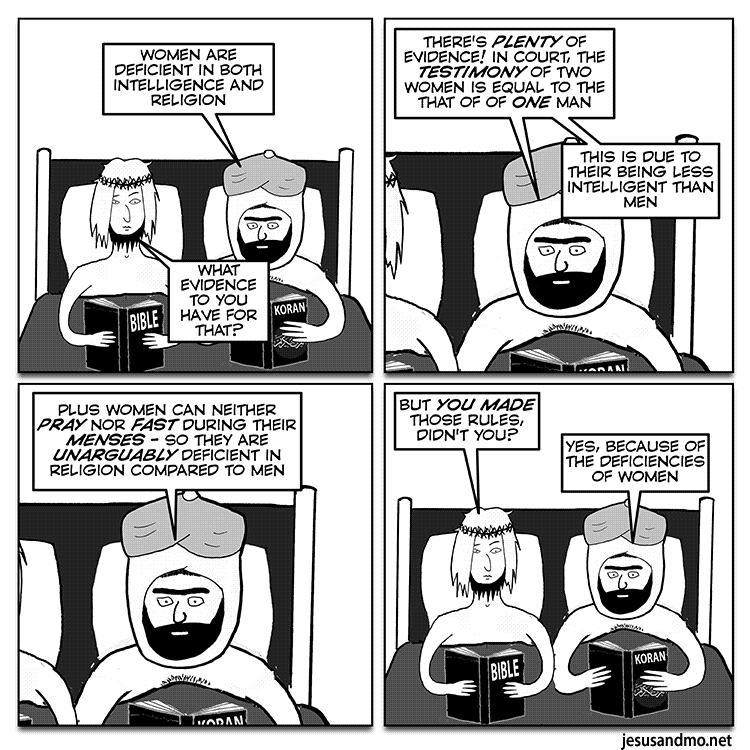 The updated Qur’an would say “a menstruating person”. 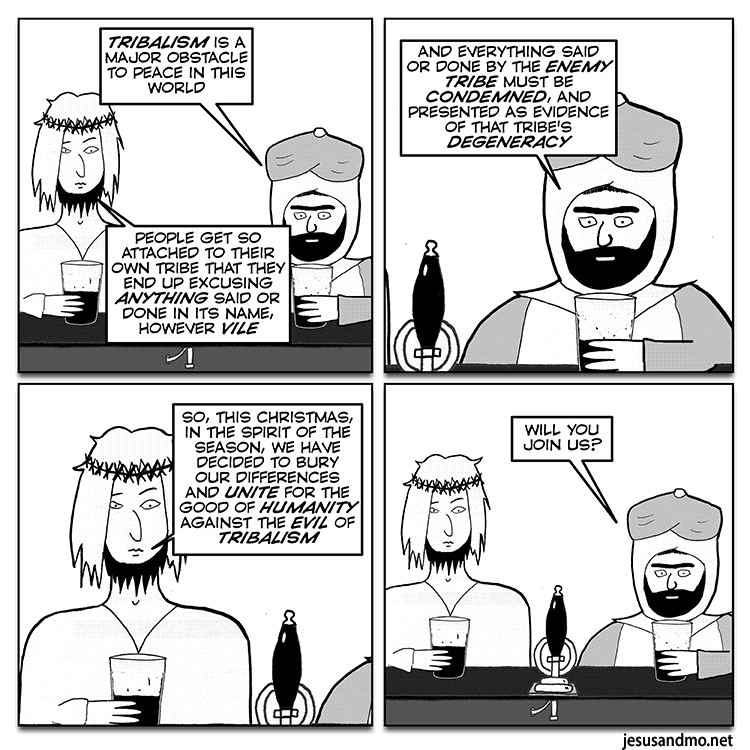 From this dreadful article in The Guardian.

The Guardian article, by Suriyah Bi, links to her work compiling an “Index of Islamophobia,” in which one can give numerical scores to the types and severity of anti-Muslim actions, which includes not just physical violence or harassment (rightly regarded as legally intolerable bigotry), but also verbal and pictorial mockery of Muslims and Islam that would be legal in America. The index is intended as a guide for how judges would punish transgressors. An excerpt:

How might it work? Let’s look at some flagrant examples of Islamophobia, including Boris Johnson’s infamous comments on burqa-wearing Muslim women as “letterboxes”, the distribution of violence-inducing “Punish a Muslim Day” letters, a headscarf being torn from a Muslim woman, and being called Shamima Begum in the workplace.

With reference to Johnson’s comments, his then position as foreign secretary contributed to a score of 10 in the recklessness category. A score of 10 was also applied in the impact category, as the comments reportedly orchestrated a 375% rise in Islamophobic attacks against Muslim women in the UK. Intensity and intention were scored at a seven and eight respectively, resulting in a total index score of 35. As a legal case before a judge, the high index score would place squarely at the heart of the prosecution process the human impact of Johnson’s comments, compelling an appropriate sentence.

If we consider being called Shamima Begum in the workplace – an experience several Muslim women have shared with me – a score of seven was applied across the four sub-categories. An index score of 28 would enable a judge to situate the incident on the scale of severity, thus handing down a lesser but appropriate sentence to, for example, the Johnson case.

Note that even the “letterbox” statement, which is tasteless, is considered legally punishable.  It goes on:

My proposed form therefore allows for victims and police professionals to identify the laws that have been breached for any and all cases of Islamophobia. A completed index and pathways to prosecution form would help judges to contextualise the incidents from the experience of the victim.

But there is more that must be done if the courts are to be equipped to bear down on Islamophobia. The Equality Act 2010 must be updated to criminalise its deliberate deployment in print and media. There should also be a specific offence of Islamophobia in the legal landscape. The Crown Prosecution Service must urgently define “hostility” in order to bring incidents of Islamophobia (and other religious hate crimes) to justice. Reviews are also needed to update the Public Order Act 1986 and the Crime and Disorder Act 1998.

I’m not sure what the Equality Act of 2010 states specifically, but I don’t think it covers hate crimes so much as discrimination.  At least Bi has the decency to lump “other religious hate crimes” along with Islamophobia, but, as Jesus points out, Muslims are guilty of Jew-hatred all the time. 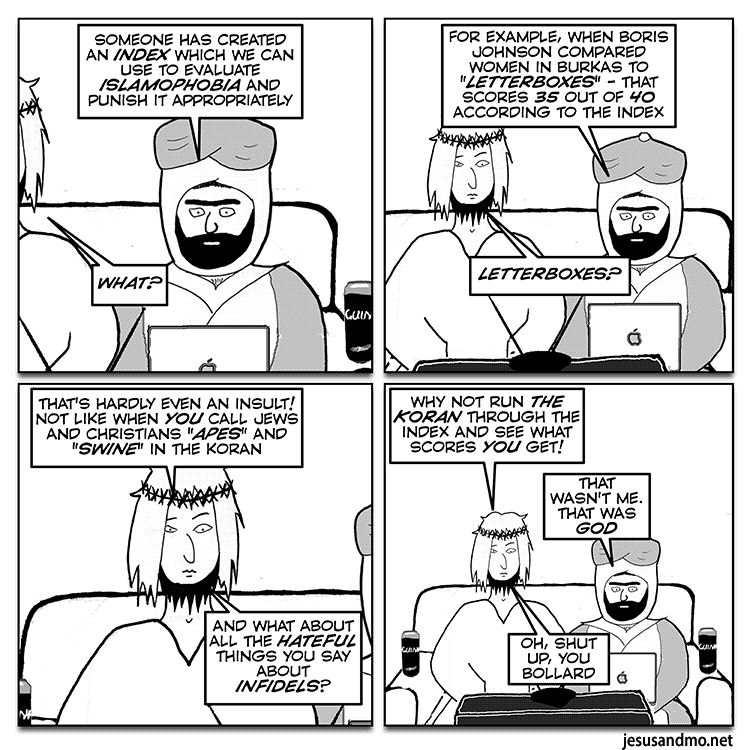 Today’s Jesus and Mo strip, called, “biases:, came with this note on the Patreon site:

She never mentioned the concept of Naïve Realism, though. Here’s the wiki if you’re interested: https://en.wikipedia.org/wiki/Na%C3%AFve_realism

I’ll spare you the trouble of looking it up:

And of course both the boys are naive realists about their scriptures and beliefs, even though “the senses” here must refer to what you get from revelation, authority, or reading sacred texts. Unfortunately, their “direct awarenesses” are in conflict: 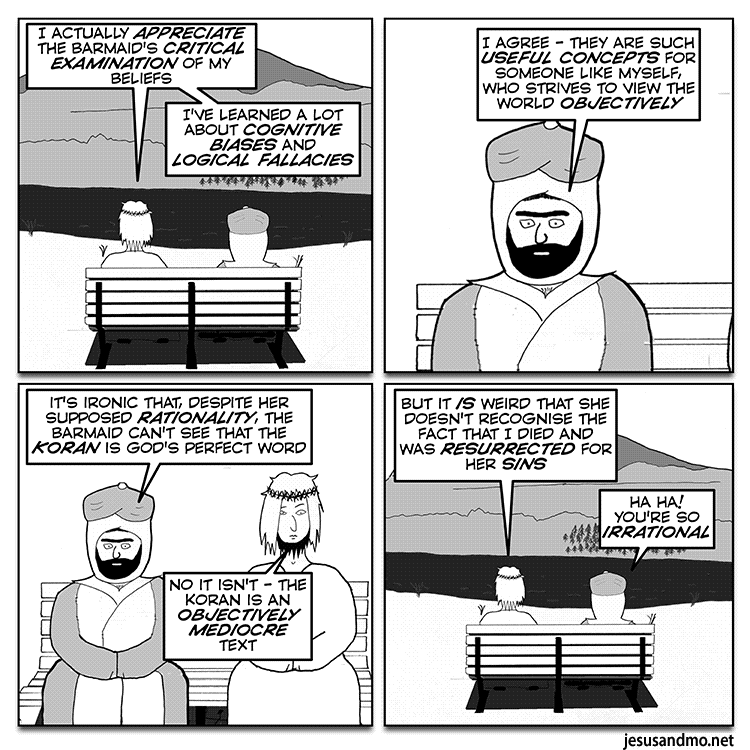 In today’s Jesus and Mo strip, called “play”, Mo expresses approbation for the World Cup as a showcase for Islam. Jesus sets him straight, but Mo never learns. . . 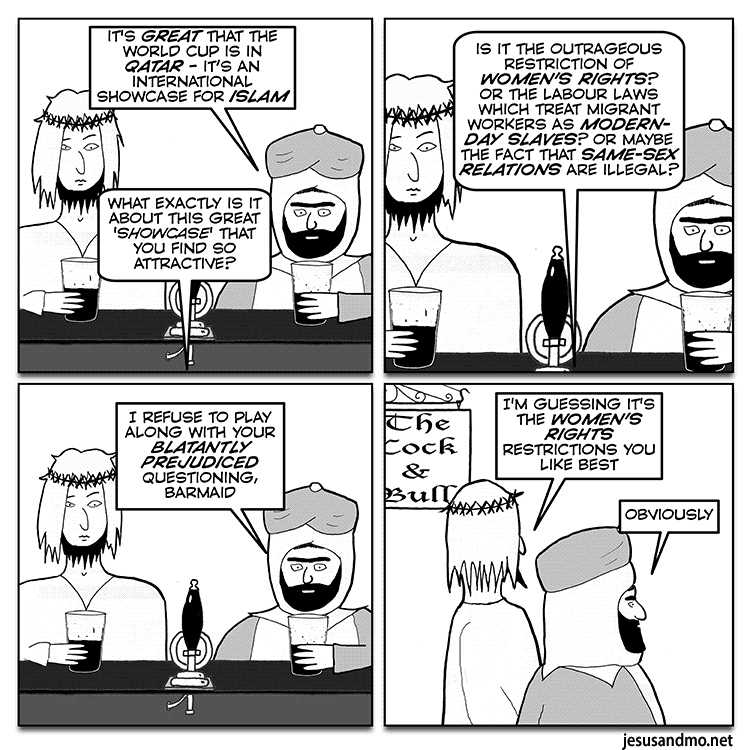 Today’s Jesus and Mo strip, called “cup”, came with an apology for the “gratuitous nudity.”

I already described the Saudi Arabia/Argentina upset this morning, but now we learn that the boys sleep in the nude. Also that Mo isn’t a big footie fan. 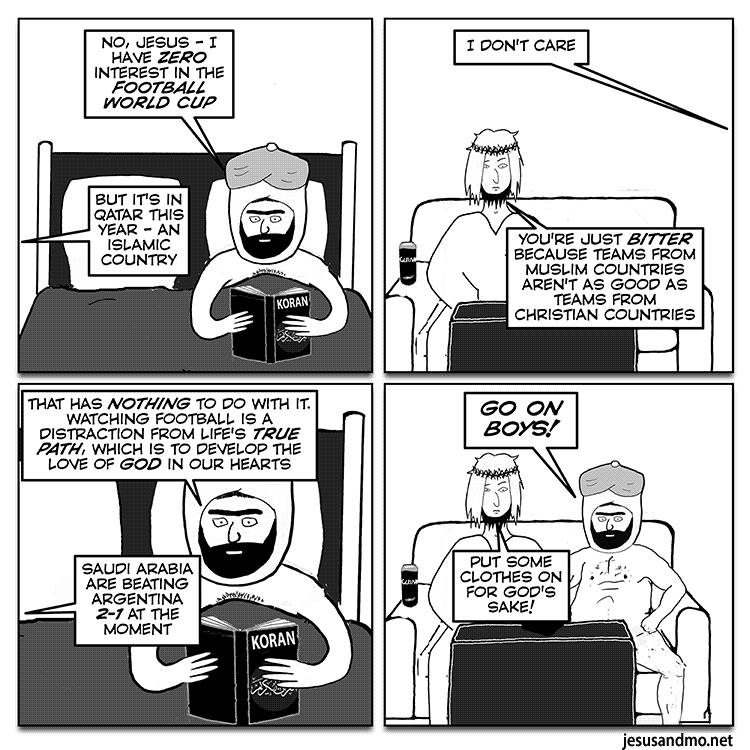