Skip to content
The actions I’ll describe in this post, taken by the Palestinian Authority and many Palestinians, are ignored by the Western press. I don’t know why, exactly, except that perhaps it doesn’t fit the liberal narrative of “Israel bad/Palestine good”. But I wish more people knew about them, because if Israel (or the U.S.) engaged in this kind of behavior, it would be trumpeted and shamed from the rooftops. When Palestinians commit these acts, they are quietly shelved in the newsroom.

The first is the mass celebration of many Palestinians that occurred when an Israeli citizen was murdered this week. This is normal behavior in Palestine, though I am sure not all Palestinians are so joyful.

In this case the Israeli was Dvir Sorek, an 18-year-old yeshiva scholar who was murdered by Palestinian terrorists last week. (He died of multiple stab wounds.) By all accounts he was a good soul, as the article from the Jerusalem Post below reports (click on screenshot).

Two suspects are in custody, one of them a Hamas activist. 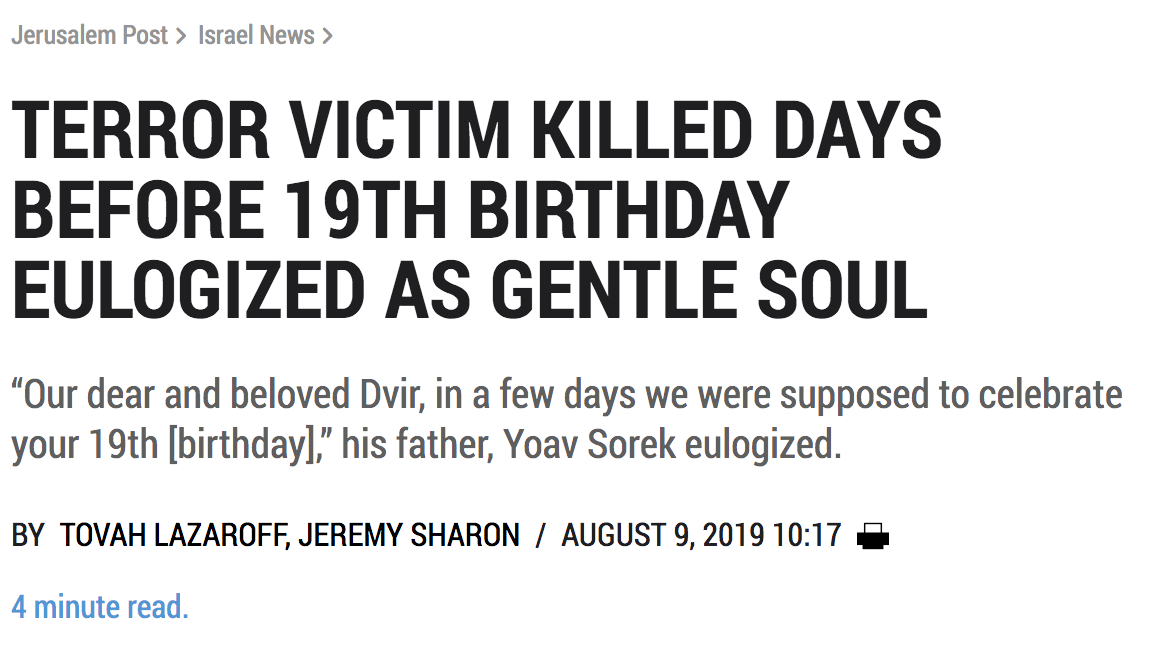 From The Times of Israel:

Dvir Sorek, a yeshiva student enrolled in a program combining Torah study with military service, left his seminary in the West Bank settlement of Migdal Oz Wednesday to head to Jerusalem to buy books — a gift for a teacher.

The 18-year-old, whose birthday is next week, never returned.

In the early hours of Thursday morning, his body was discovered on the side of a road leading into the settlement, riddled with stab wounds. He was not in uniform at the time of his death, the army said. Authorities were treating the killing as a terror attack.

“He was found clutching the books that he’d bought,” Rabbi Shlomo Wilk, the head of the Migdal Oz seminary Machanayim, said Thursday morning, as word of Sorek’s murder was met with shock and sadness by those who knew him.

“He was an amazing man, very sensitive, smart, modest, who fused wisdom and quiet… This is a man who at the beginning of the year saw an Arab walking around the area with a donkey that looked unwell, sick, so he offered to buy the donkey. He bought it, treated it, and sent it away,” Rabbi Sarel Rosenblatt, who taught Sorek, told Channel 12 news.

Now if you wanted to excuse his killing, you could say that Dvir was preparing to be in the Israeli Defense Forces, but I seriously doubt the killers knew that. After all, when he was stabbed he was dressed as he was below, with the sidelocks and yarmulke, not in uniform. How could he be distinguished from any religious Jew who wasn’t in that IDF program? (It goes without saying that I don’t adhere to the superstitions that Dvir was studying, but that makes no difference about the immorality of his murder and the shamefulness of celebrating it.)

At any rate, who would celebrate the stabbing death of a kid like this? You know who. 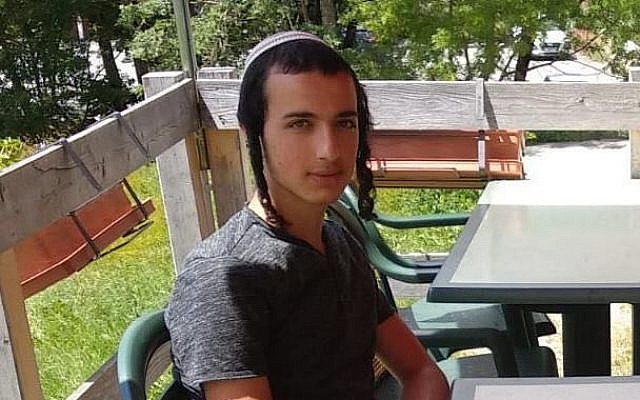 As is customary when an Israeli civilian is murdered, Palestinians handed out candy in celebration, and also set off fireworks. That’s just sick. But it happens all the time. Do people in the West know about this? I find these accounts only in the Israeli press—though I don’t look at all media. And if people do know about it, and also know that these celebrations don’t happen when Israelis kill a Palestinian civilian (that’s rare, but it has happened, and the criminal Israelis go to jail for murder), do they excuse it—or just overlook it? Celebrating murder like this is inexcusable and shameful: it’s the worst of human behavior:

How sick and vile is this?

Another form of inexcusable behavior is the well known “pay for slay” program of the Palestinian Authority (no, not Hamas), whereby those terrorists who kill Israelis, and either die as suicide bombers or are put in jail, receive large amounts of money from the PA, which goes to their families. (I believe that about 6% of the PA’s budget goes for these goulish emoluments.)

On August 9, 2001, Palestinian terrorists perpetrated a suicide bombing on the Sbarro pizza restaurant in Jerusalem. It was a bad one: 15 civilians were killed, including 7 children and a pregnant woman, and 130 people were wounded. These were just people out to enjoy a pizza.  Hamas and the Islamic Jihad claimed responsibility; 8 terrorists were found responsible, including the bombmaker, the guy who blew himself up along with everyone else, and Ahlam Tamimi, the woman who scouted the location. (She was let go in an exchange of 1,027 Palestinian prisoners, many of them convicted terrorists who committed more terrorism after their release, in return for a single Israeli soldier!)

Tamimi and all the others got their “pay for slay” money, of course, and on the anniversary this year, the total amount paid to the perpetrators of the attack was calculated by Palestinian Media Watch (click on screenshot below). It’s nearly a million dollars now, and continues to grow.

Tamimi now lives in Jordan, and since one American (a pregnant woman) was killed in the attack, she was charged by the U.S. in 2013 with using a weapon of mass destructions to kill Americans outside the U.S. But since Jordan has no extradition treaty with the U.S. for terrorists (although they do for other lawbreakers), she can’t be brought to the U.S. for trial. She shows no remorse for the slaughter, and in fact hosts a television show in Jordan that spreads hatred of Israel and the Jews.

Such is the behavior of the Palestinian Authority (considered the lesser of two evils when compared to Hamas!) vis-à-vis the murder of Israeli civilians. Can anyone defend “pay for slay”? Because the whole purpose of the program is to incite the murder of civilians and to create “martyrs.” If you know your family will be taken care of if you’re killed or imprisoned in a terrorist attack, you’re more likely to commit one.  A more inhumane program I cannot imagine.

The victims and the terrorists, along with the dosh paid to the latter by the Palestinian Authority (from the PMW page): 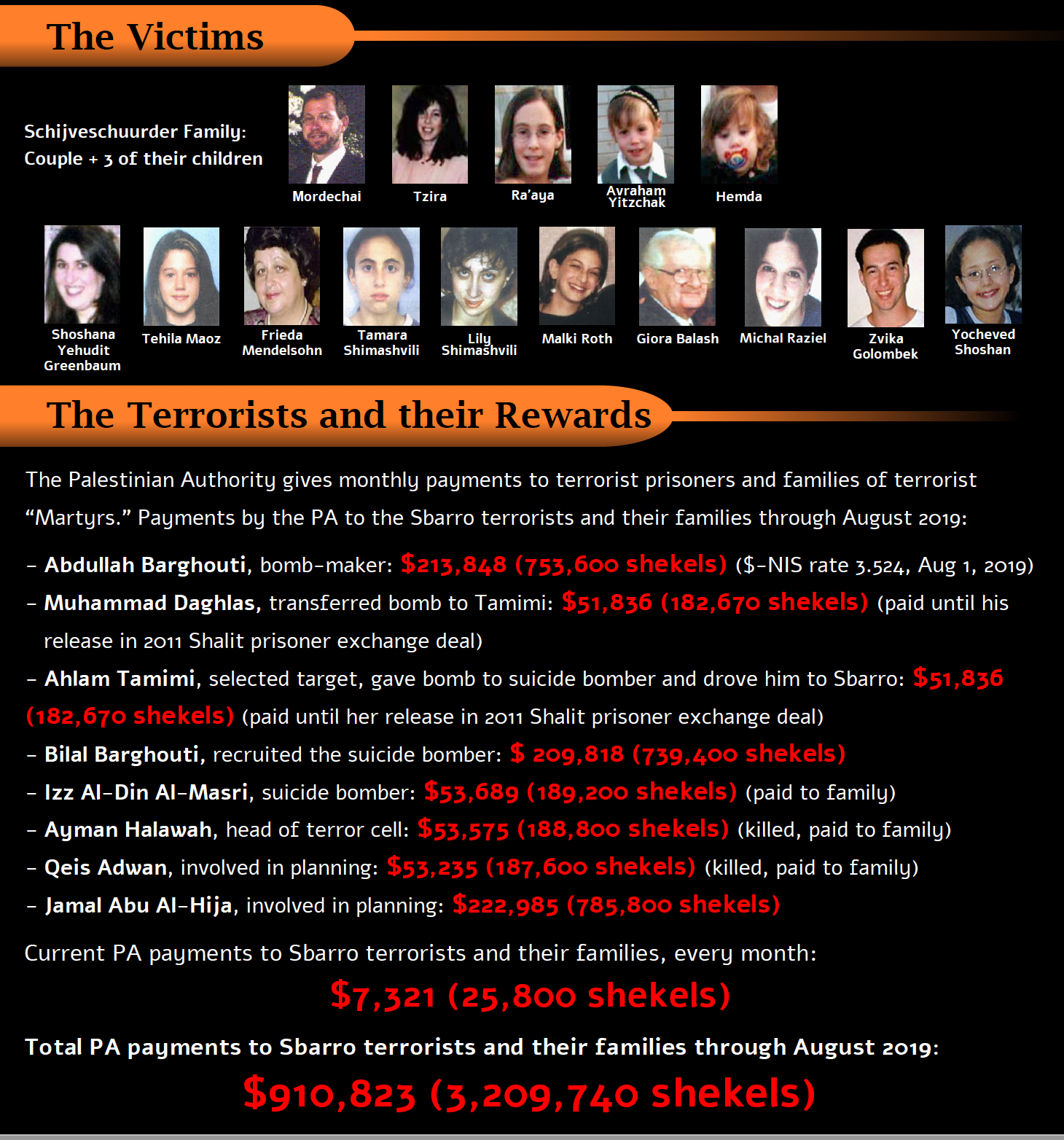 30 thoughts on “Palestinians celebrate the stabbing murder of a yeshiva scholar, PA pays nearly a million bucks to pizza-bombing terrorists and their families”