Since August of last year, John Sailer, who works for the National Association of Scholars (NAS), has been putting put together a long thread about Diversity, Equity, and Inclusion statements (DEI) that are now required for many applicants for academic jobs. Indeed, in many cases they are weighed more heavily in the hiring process than are academic achievements and qualifications themselves. DEI statements can even completely override academic and scholarly merit! For academic jobs in the Life Sciences at UC Berkeley, for instance, your DEI statement is ranked on three criteria: your knowledge of DEI, your track record of DEI work, and your plans to implement DEI initiatives if hired). This is done using a point system (15 points total). If your statement doesn’t accrue enough points, your application is put in the dumpster and is not considered again. Too bad if you look like a future Nobel laureate; there is no job for you at UC Berkeley unless you have a long track record and well-considered philosophy of diversity. (We are of course talking about racial diversity, not viewpoint diversity or socioeconomic diversity.)

I’ve objected to these statements because they constitute “compelled speech”: a prospective faculty member has to adhere to certain specified ideological principles to be hired, principles having to do with social engineering rather than teaching, learning, and research. While I agree with many of the sentiments behind these initiatives, I do not favor making them compulsory, as it foists a political homogeneity on universities and stifles free discussion. How could it not? You simply can’t be hired unless you’re of the right political bent.

The NAS is an education-centered political advocacy group with a conservative bent. But I make no apologies for mentioning right-wing sources; what matters here are the assertions, which you can check for yourself. Every claim I know of below is accurate, but of course I didn’t check all of them.  Also this is Sailer’s own Twitter feed, so this isn’t an official presentation by the NAS—yet.  But one thing is for sure: you’re never going to see a “progressive” individual or organization collect examples of DEI-statement requirements. Progressive favor such statements, but flaunting them in public is not a good thing to do. Why? Figure it out for yourself.

Sailer begins his thread by noting that the governors of the University of North Carolina (UNC) have ended diversity statements, which would be a good thing to do. UNC at Chapel Hill was also the first university in the U.S. to follow the University of Chicago by mandating both the Chicago Principles of Free Expression and the Kalven Principles of institutional neutrality. That’s all pretty amazing for a school in the South!)

I can’t find anything on the web about the ending of DEI statements at UNC, so I’ll take Sailer’s word for it for the time being. I did find an NAS article he wrote in August of last year called “Mandatory DEI statements undermine academic freedom at UNC-Chapel Hill,” which lists all the jobs at UNC-CH that required diversity statements. But it doesn’t mention ending DEI statements, except as a desideratum.

At any rate, here’s Sailer long list of DEI-related requirements for schools, how they are assessed, and then at the end a bit about the burgeoning DEI bureaucracy. There are 18 further tweets that I didn’t have space to include, so look at the thread for yourself. Just regard this as data that you can check if you wish. If it’s all true, and I don’t think Sailer would make this stuff up, you should be very afraid for the future of universities, of free speech, and of academic freedom.

THREAD: Since the UNC Board of Governors proposed (effectively) ending diversity statements, a few critics have made arguments either in favor of DEI statements or DEI more broadly.

Some have argued that I’m overstating my case. For clarity, I want to lay out what I’ve said.

Cluster hires are hiring of a several faculty at once who are committed to advancing DEI initiatives. I wasn’t aware that the National Institutes of Health (NIH), which uses taxpayer money, has grants for this purpose.

The explicit condition for employment through the program, noted in many grant-award announcements, is “a demonstrated commitment to DEI.” pic.twitter.com/ByQIYjQYhB

The first tweet is Berkeley’s infamous Life Sciences DEI initiative. If you said in your UCB DEI statement that you were committed to treating all students equally and with empathy and respect, regardless of ethnicity, your application was as good as dead. The second tweet below that, at Emory, biology puts as much weight on DEI initiatives as it does on research and teaching, presumably for both hiring and promotion.

The Oregon DEI statement is not just an add-on to a promotion package that can be ignored. Rather, it has “clear consequences and influences” on your chances of promotion. Professors: start reading your Kendi!

And I'll note, you can't say that this is just a formality, or that it's ultimately inconsequential.

The school's DEI plan literally promises to "Reinforce the importance of these efforts by establishing clear consequences and influences on promotion packages." pic.twitter.com/58CZFBs64H

As noted below, the California Community Colleges system is indeed the largest such system in America, and their DEI evaluation criteria for all employees (does this include everyone employed by the system?) are very strict. Further, the school system has to develop a “pedagogy/curriculum that promotes a race-conscious and intersection lens [sic]” and an “anti-racist and inclusive environment.” This is the total racialization of the educational system, treating students as if they were members of different but individually homogeneous groups.  These initiatives comprise efforts at social engineering on a massive scale rather than as a vehicle to get students to learn, to learn to think, and to promote teaching. The “teaching and learning” here is political propaganda, and I know of no similar large-scale endeavor in American educational history.

Second, the evaluation of diversity statements is often explicitly ideological, as is made evident by the rubrics that universities openly provide.

Here are a few examples of those rubrics.

Here’s the infamous Berkeley rubric which explicitly rejects Dr. King’s criterion for how to treat people. I’ve put it below, and it’s being copied by other schools explicitly (e.g. “see UC Berekeley’s rubric”).  Below are Cornell’s DEI criteria for hiring taken from the second tweet.  There is no stopping this juggernaut: 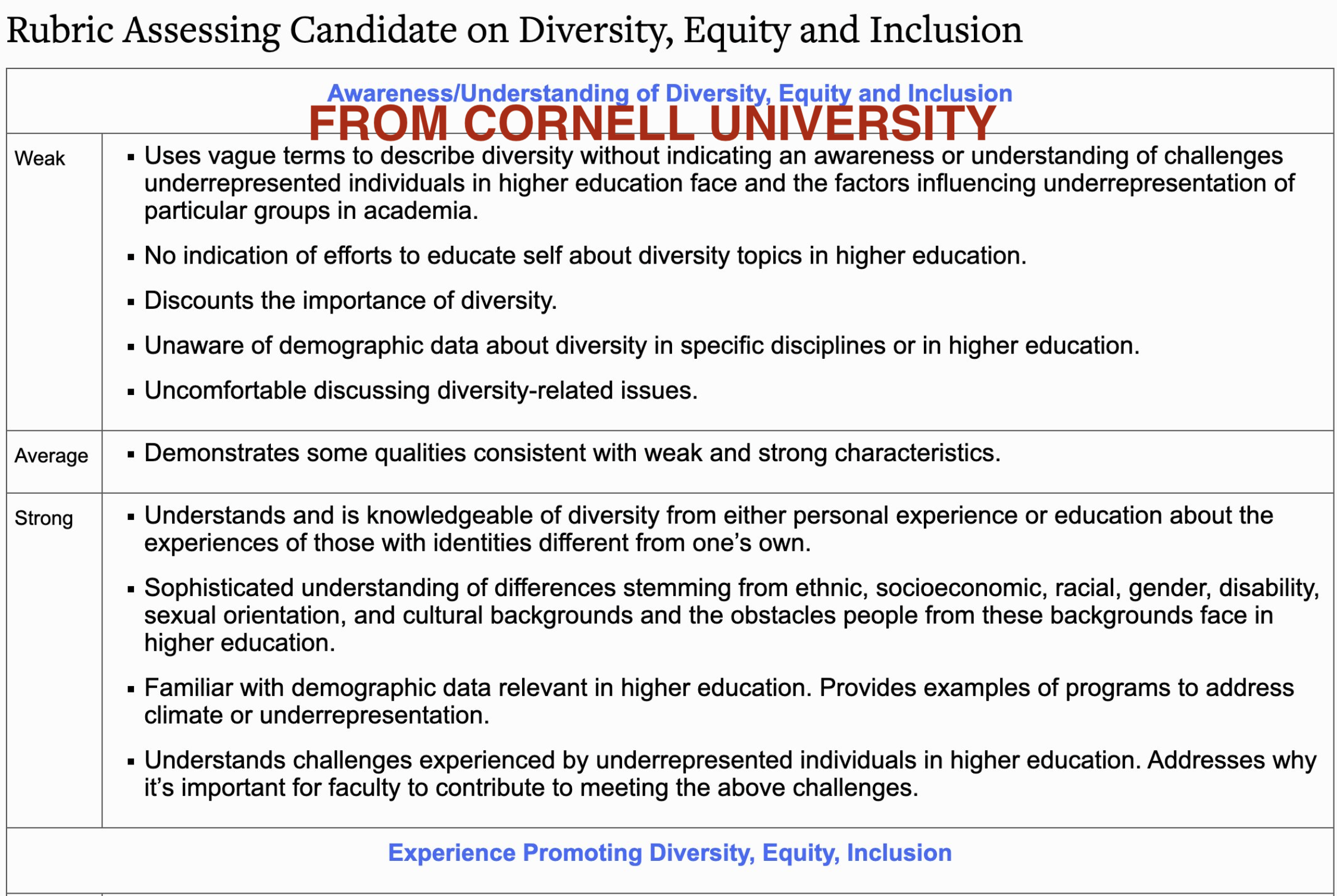 I can hardly find anyone who will defend this rubric, it being so obviously loaded. Yet, it's adapted, copied, and recommended by universities across the country.

Finally—but remember there are 18 other tweets—we have the University of Michigan’s DEI bureaucracy: 56 employees and a salary budget alone of $10.6 million. That does not include the budget for activities. It is a huge investment in DEI, and, once in place, it will not go away.

A few notes on this point:

1) I would be very skeptical of the judgement of anyone who looks at these numbers and says "this is no big deal."

Sure, universities spend a lot more money on other things, but this is enough to fund whole departments. pic.twitter.com/mctN2dIUDz

Have a look at the other 18 tweets and see if you’re not chagrined at the change of course of universities.

In a few months, the Supreme Court will overturn affirmative action, and most likely also prohibit race-based searches for candidates along with race-based hiring. What will that do to these initiatives? It will likely constrict their activities, but—make no mistake—schools will have their DEI one way or another.  With such a bureaucracy, they will somehow have to keep banging the drum that DEI is necessary to overcome the seemingly-permanent “structural racism” of universities, and workarounds will be found. (I already know of a few.)  The social engineering will not stop, nor the deflecting of universities from their real purpose down the path of “progressive ideology”. From now on, all professors, to get hired, must profess fealty to a specified ideology, and that is compelled speech.

33 thoughts on “A thread about universty DEI statements”