For a long time I’ve been admiring and touting the work of Masih Alinejad, an Iranian-American women’s rights activist (and general political activist) as well as a journalist. She’s absolutely fearless, even though she was arrested in Iran for agitating against the government.  She’s particularly opposed to head and body coverings, and here’s a video she made 2016 after the “feminist government of Sweden” all wore hijabs when they visited Iran (see my post here). She calls them out for their hypocrisy.

Alinejad is passionate and eloquent. She also founded the My Stealthy Freedom movement and Facebook page, in which Iranian women take off their hijabs (a criminal offense) to show their opposition to the misogyny of Iran’s theocratic government. She also founded the “White Wednesdays” movement, in which Iranian women wear white on that day to protest repression by the government. Remember, before the 1979 Islamic Revolution, many Iranian women dressed as they pleased (see my post from 2016), and when the theocracy began and imposed a dress code, there were huge protests by the women of Iran.

To no avail, alas. Iran now has morality police who enforce the dress code, and women showing more hair than the government likes are liable to be arrested, beaten, or called out by the more religious citizens of the country.  In forty years, Iran has backtracked from a modern state to a medieval theocracy, and Alinejad is one of those few people whose life is devoted to pointing that out. She fled Iran in 2009, lived in Britain for a while, and is now a US citizen broadcasting for the Voice of America’s Persian network.

I bring this up because recently a plot was unveiled, involving four Iranian citizens and one American, to lure her out of the country (à la Jamal Khashoggi), kidnap her, and then smuggle her back into Iran. You know what would have happened to her then: certain death. Fortunately, the plot was discovered in advance by the FBI, the American was arrested, and the four Iranians were indicted. But in the eight months since she was informed of the plot, she and her family have had to live in a series of safe houses, moving from time to time so Iran doesn’t discover where she is. This is all, of course, meant to silence critics of the government.

Here’s her thank-you to the FBI:

I am grateful to FBI for foiling the Islamic Republic of Iran's Intelligence Ministry's plot to kidnap me. This plot was orchestrated under Rouhani.

This is the regime that kidnapped & executed Ruhollah Zam. They've also kidnapped and jailed Jamshid Sharmahd and many others pic.twitter.com/HUefdEbiil

Since then, Alinejad and her cause have received increasing attention (the “progressive” Western Left tends to ignore the oppression of women by Islamic countries of the Middle East). Here’s a tweet by Biden’s Secretary of State, who just met with her.

Good conversation today with @AlinejadMasih, who has demonstrated tremendous courage. I affirmed that the U.S. will always support the indispensable work of independent journalists around the world. We won’t tolerate efforts to intimidate them or silence their voices.

And all this is by way of informing you that this evening, at 5 p.m. Pacific time, Alinejad will be having a conversation with Bari Weiss. It’s for subscribers to Weiss’s site only, and I’m one, but of course I can’t reveal the Zoom link for the conversation. But I’m sure it’s going to be a great exchange. Here’s Bari’s announcement (click on screenshot; I think this note is free): 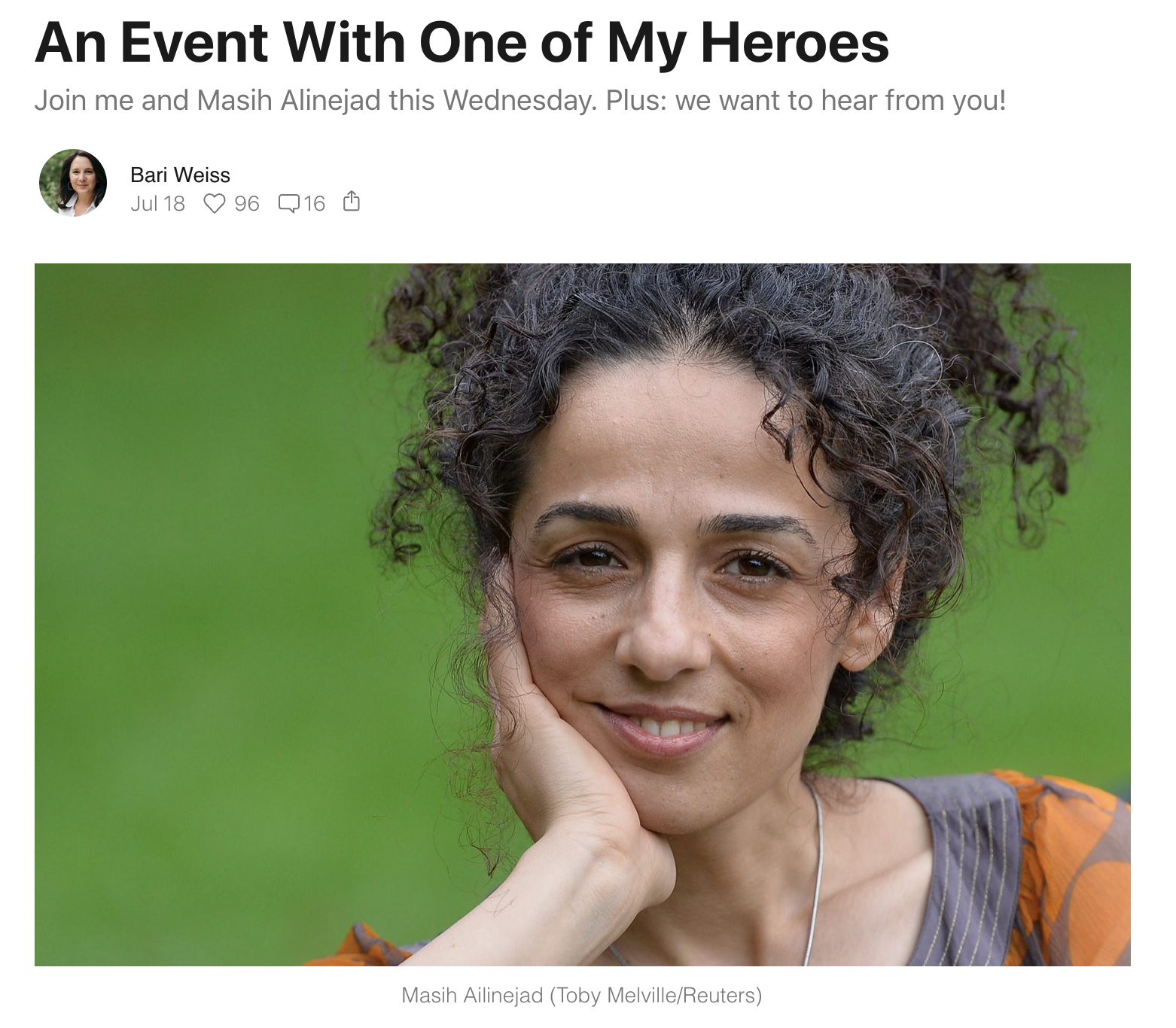 Feminists don’t fare well in the Islamic Republic. About a decade ago, Masih fled the country, but she continued to lead the movement against Iran’s gender apartheid from exile. In 2014 she started the online movement My Stealthy Freedom, which has inspired countless Iranian women defy the regime by talking off their hijabs in public. These days, the journalist has more than five million followers on Instagram, a show on Voice of America, and a Twitter account devoted to elevating Iran’s pro-democracy movement.

It’s no wonder that the Ayatollahs are terrified of her.

In 2018, Masih’s sister was forced to denounce her on state television. In 2019, her brother Ali was arrested and sentenced to eight years in prison for the crimes of “assembly and collusion against national security” and “insulting the Supreme Leader.” In a video recorded and released just before his arrest Ali told his sister: “The moment I’m arrested, speak out.” He insisted: “Be strong and do your work. You are doing the right thing.”

. . . .I am thrilled to announce that on Wednesday evening at 5 PM PST I will be hosting a subscriber-only event with this courageous woman.

We’ll discuss the plot against her, the Biden administration’s policy toward Iran, where she summons the strength to risk her life for what is right, and any other questions you’d like to ask. Please join us.

All subscribers will receive an email with the link to the event on Wednesday morning. So if you haven’t already subscribed, click here.

It’s $50 a year, and it’s interviews like this that make it worth it. You can even ask Masih questions.

17 thoughts on “Bari Weiss in conversation with Masih Alinejad”