The trope, of course, is C. S. Lewis’s (in)famous “Liar, lunatic, or lord” passage from his book Mere Christianity, also known as Lewis’s Trilemma. Here it is:

I am trying here to prevent anyone saying the really foolish thing that people often say about Him: I’m ready to accept Jesus as a great moral teacher, but I don’t accept his claim to be God. That is the one thing we must not say. A man who was merely a man and said the sort of things Jesus said would not be a great moral teacher. He would either be a lunatic — on the level with the man who says he is a poached egg — or else he would be the Devil of Hell. You must make your choice. Either this man was, and is, the Son of God, or else a madman or something worse. You can shut him up for a fool, you can spit at him and kill him as a demon or you can fall at his feet and call him Lord and God, but let us not come with any patronizing nonsense about his being a great human teacher. He has not left that open to us. He did not intend to. … Now it seems to me obvious that He was neither a lunatic nor a fiend: and consequently, however strange or terrifying or unlikely it may seem, I have to accept the view that He was and is God.

I remember when I read the book as part of my research for Faith Versus Fact, and I read it because Mere Christianity is supposed to be the best selling and most popular book on Christianity save the Bible itself. You don’t have to be a rocket scientist to see that there are other possibilities beyond Lewis’s three, including Bart Ehrman’s thesis that Jesus was an apocalyptic preacher who may have believed what he said, but didn’t claim he was God himself.  You can see other criticisms at The Secular Web.

All in all, I was pretty appalled that people were taken in by C. S. Lewis’s arguments for Christianity in the book. It was like The Little Golden Book of Jesus for Brits. Grania, a lapsed Catholic, always said that Lewis was popular simply because he was one of the few theologians who could write for the average person.

But on to the strip, in which Mo gives Jesus a zinger: 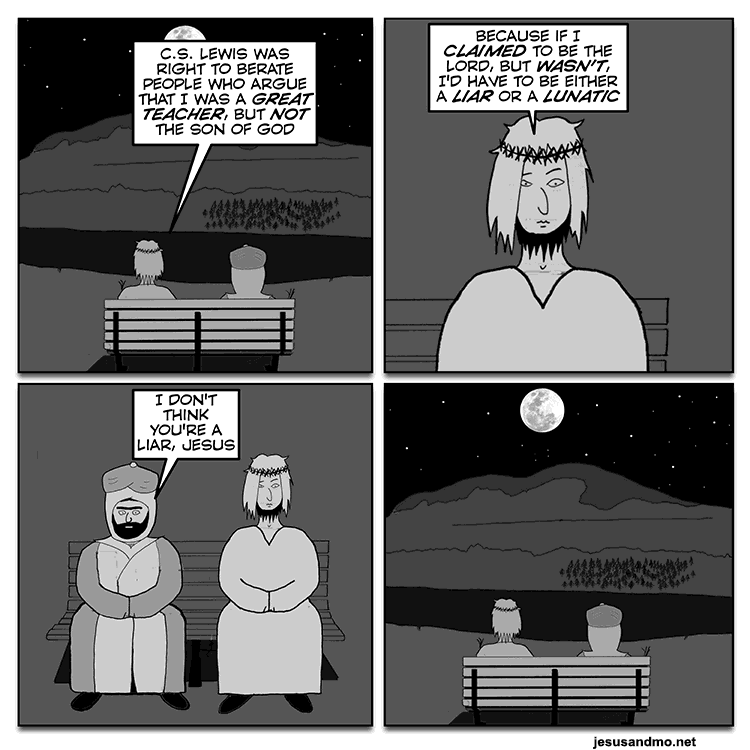