Today’s lovely arthropod photos come from regular Mark Sturtevant, whose IDs and captions are indented. Click on the screenshots to enlarge the photos.

The first pictures continue the series showing a big female Chinese praying mantis (Tenodera sinensis) that I had shared here recently. This time we see her on the “mantis branch” that I use to pose these insects for pictures. The raptorial fore-legs (I call them “murder arms”) are a marvelous trapping device. 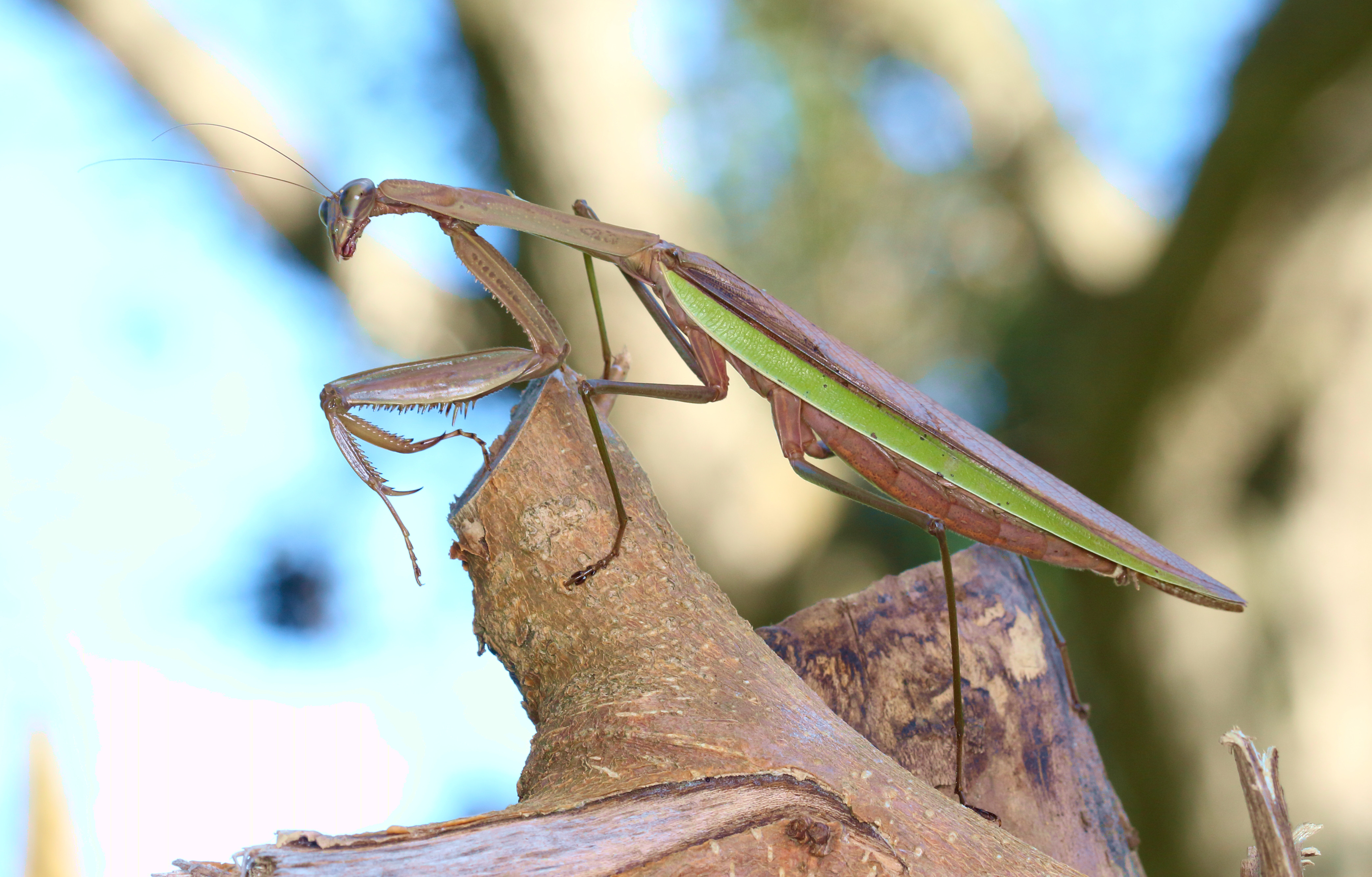 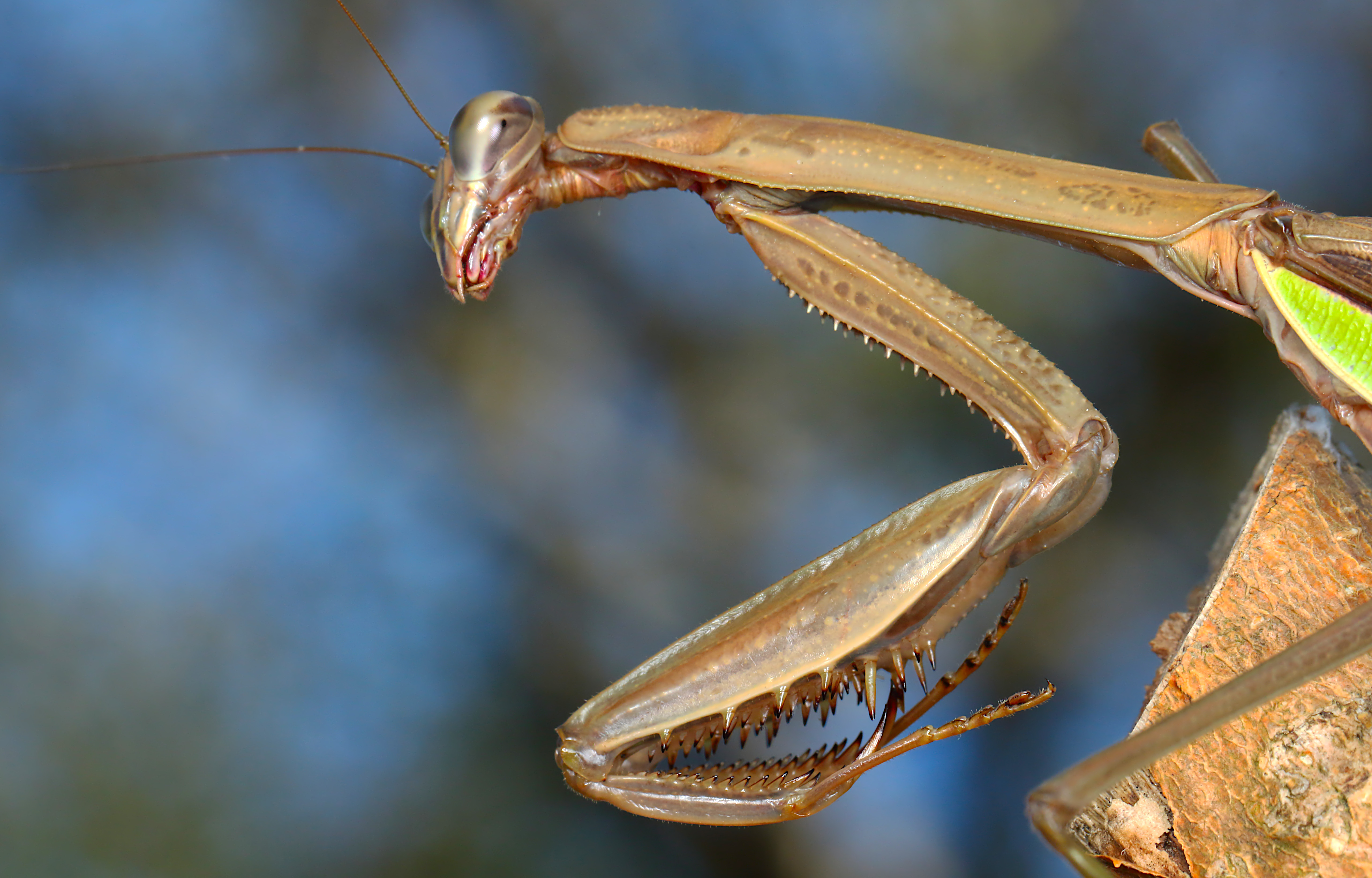 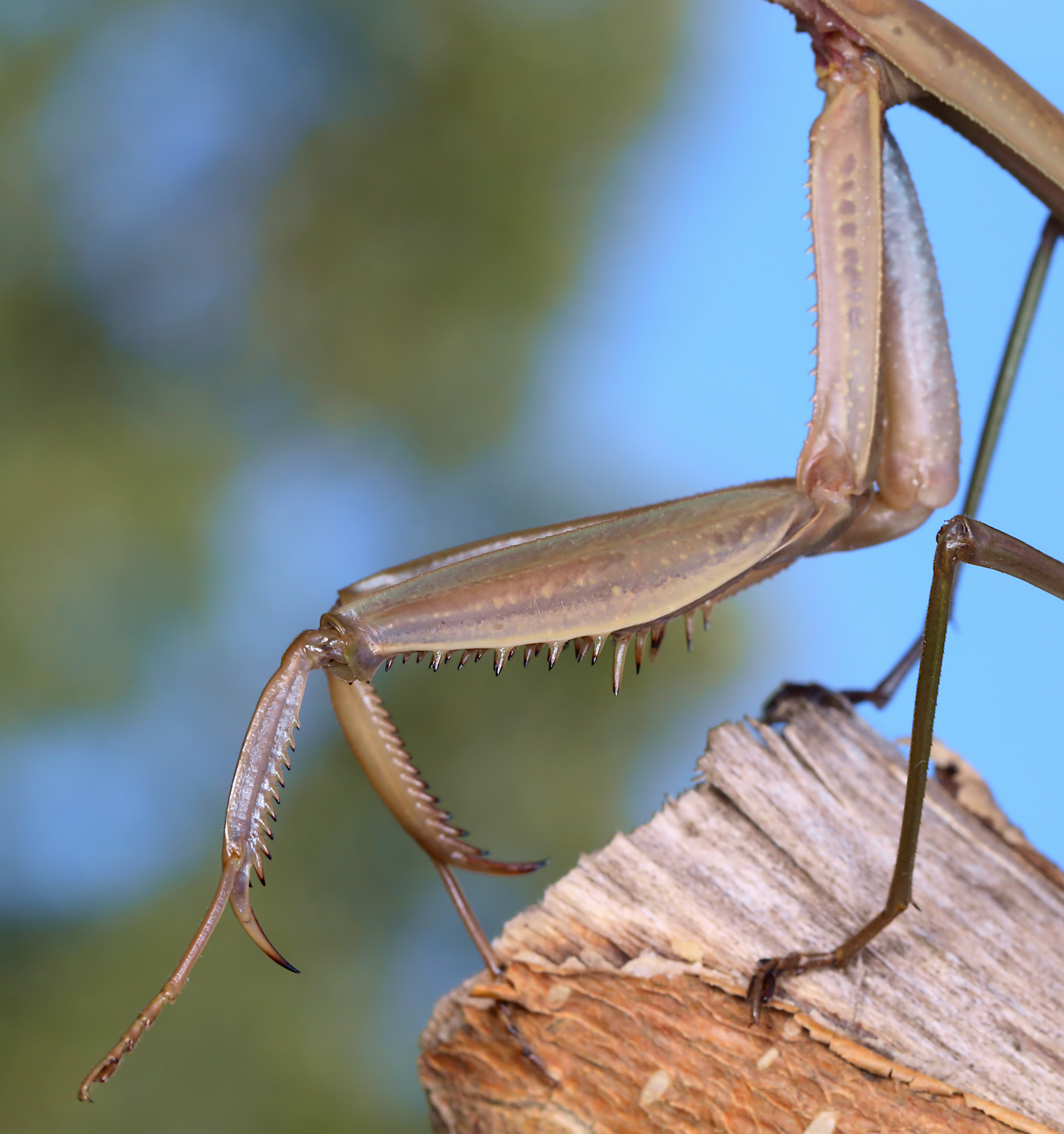 I had recently learned that there is a record of what are thought to be early mantids, and these are purported to show their murder arms in transitional stages of evolution. Some early mantids also had raptorial characters in both their front and middle pair of legs. Here are two papers with pictures and drawings: papers 1 and 2.

During one of the photo sessions, I had tried to introduce the female to a male Chinese mantis. He is the eager looking fellow shown in the next picture. 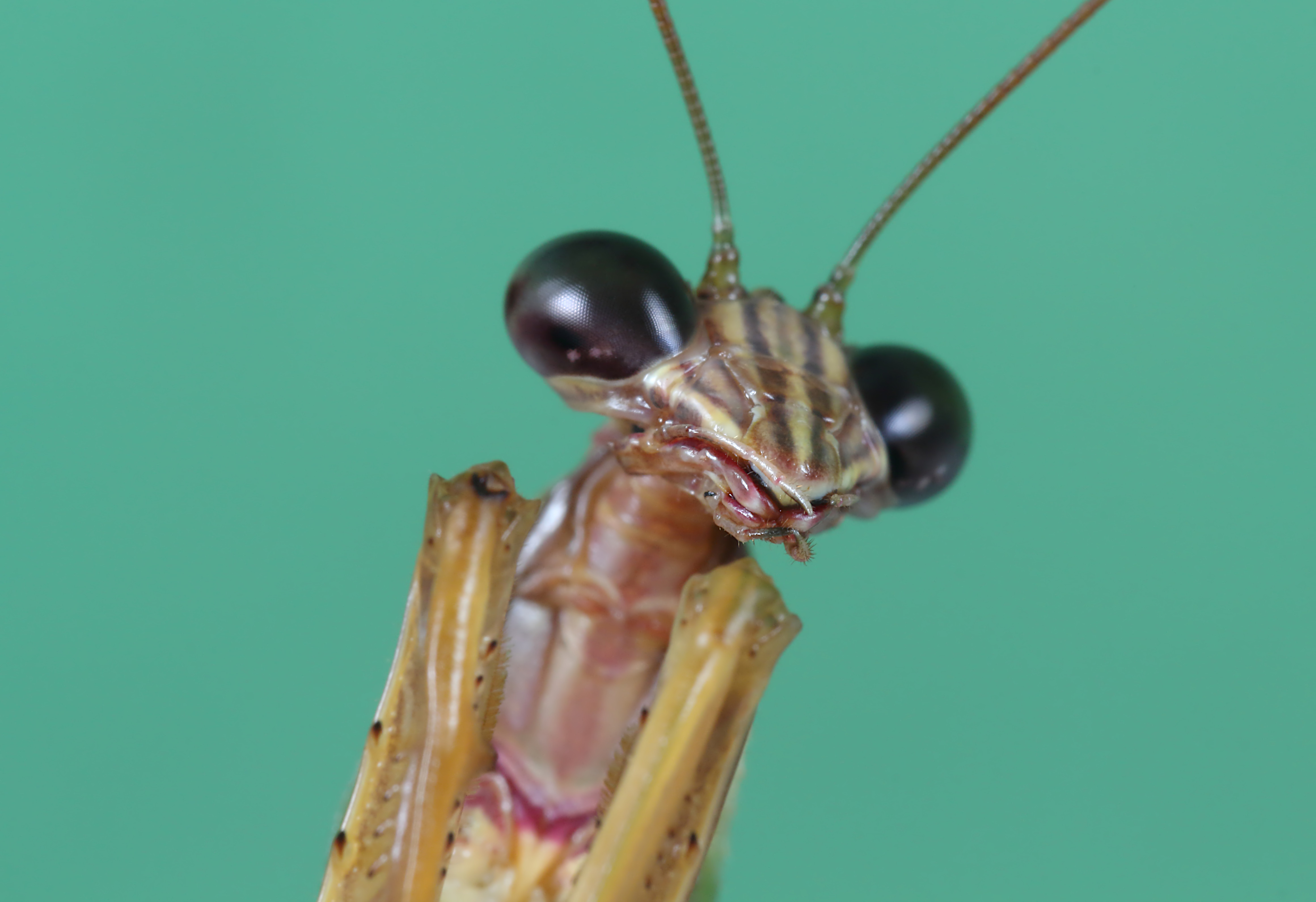 My intention was to maybe photograph a mating (and hopefully not cannibalism), but the male was far too hyperactive. Without even glancing at the female, he immediately took flight. No problem, I thought, since these large insects aren’t strong fliers, right? Wrong. He quickly ascended to the tallest tree-tops, and disappeared. I did not know they could do that!

Well, there will be more female mantis pictures in the next post.

Next up is an installment of pictures taken during a vacation in the Upper Peninsula of Michigan. The Michigan U.P. is a sparsely populated area of the country, and visiting it is like stepping back in time. The family would go sight-seeing along the numerous waterfalls and river rapids while I mainly hiked forest trails and fields with the camera. There were numerous large orb webs along the forest trails. In all cases one would see a suspicious looking leaf, artfully rolled up at either the 10- or 2 o’clock position. The next two pictures show what is to be found inside the leaves. Several orbweavers can be tricky to tell apart, as they are variable in color and pattern, but I suggest this is a hefty example of the marbled orbweaver (Araneus marmoreus). 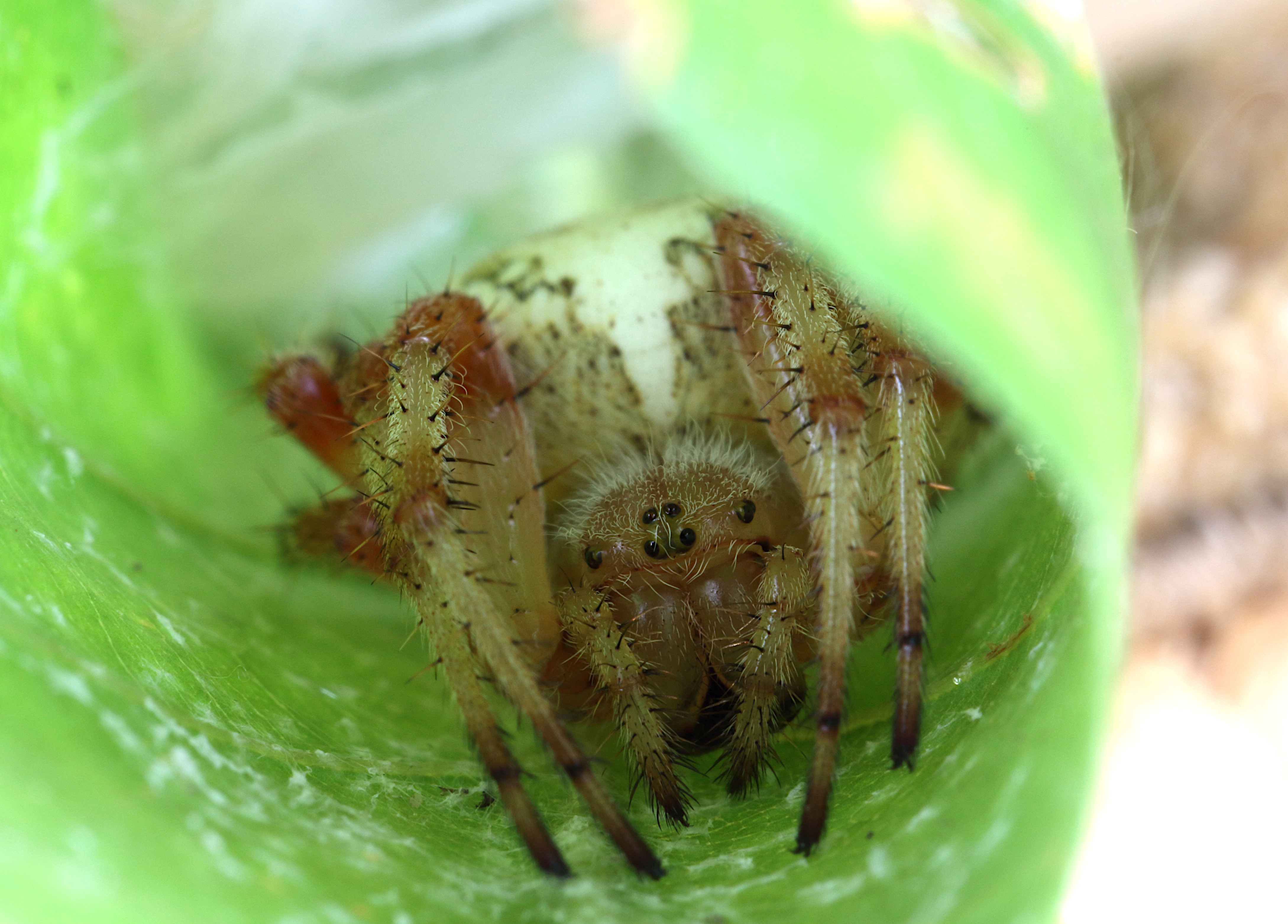 You can find new species of insects if you go to a new place, and a new tiger beetle is a very special find. Here is a very dusty boreal long-lipped tiger beetle (Cicindela longilabris) which is new to me. 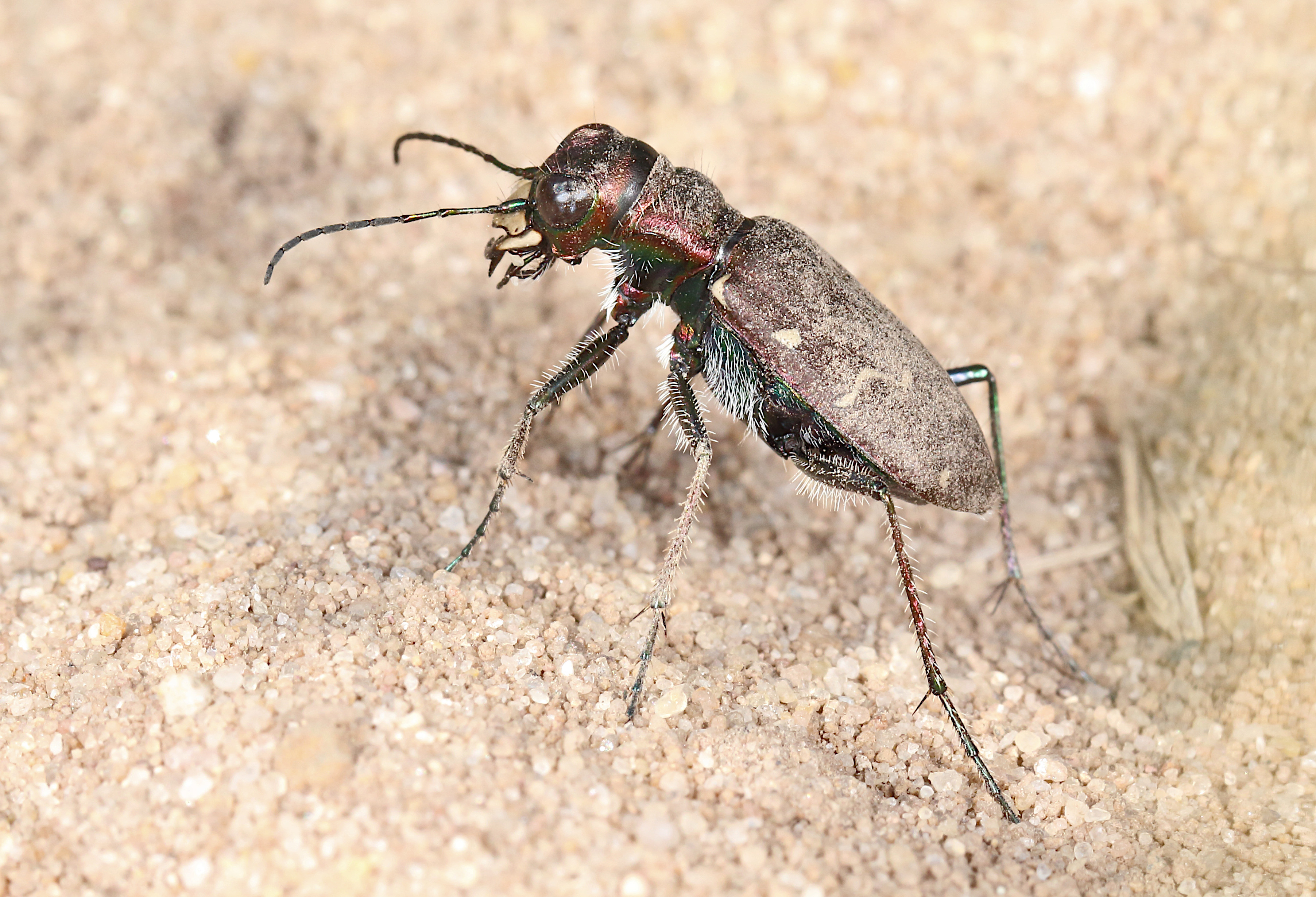 One of the more memorable sessions with the camera during our U.P. trip was spent at night, sitting outside with a lantern and a bed-sheet to draw in night flying insects. Even in the chilly northern air, things got busy very quickly. What was recorded included this large popular longhorn beetle (Saperda calcarata). 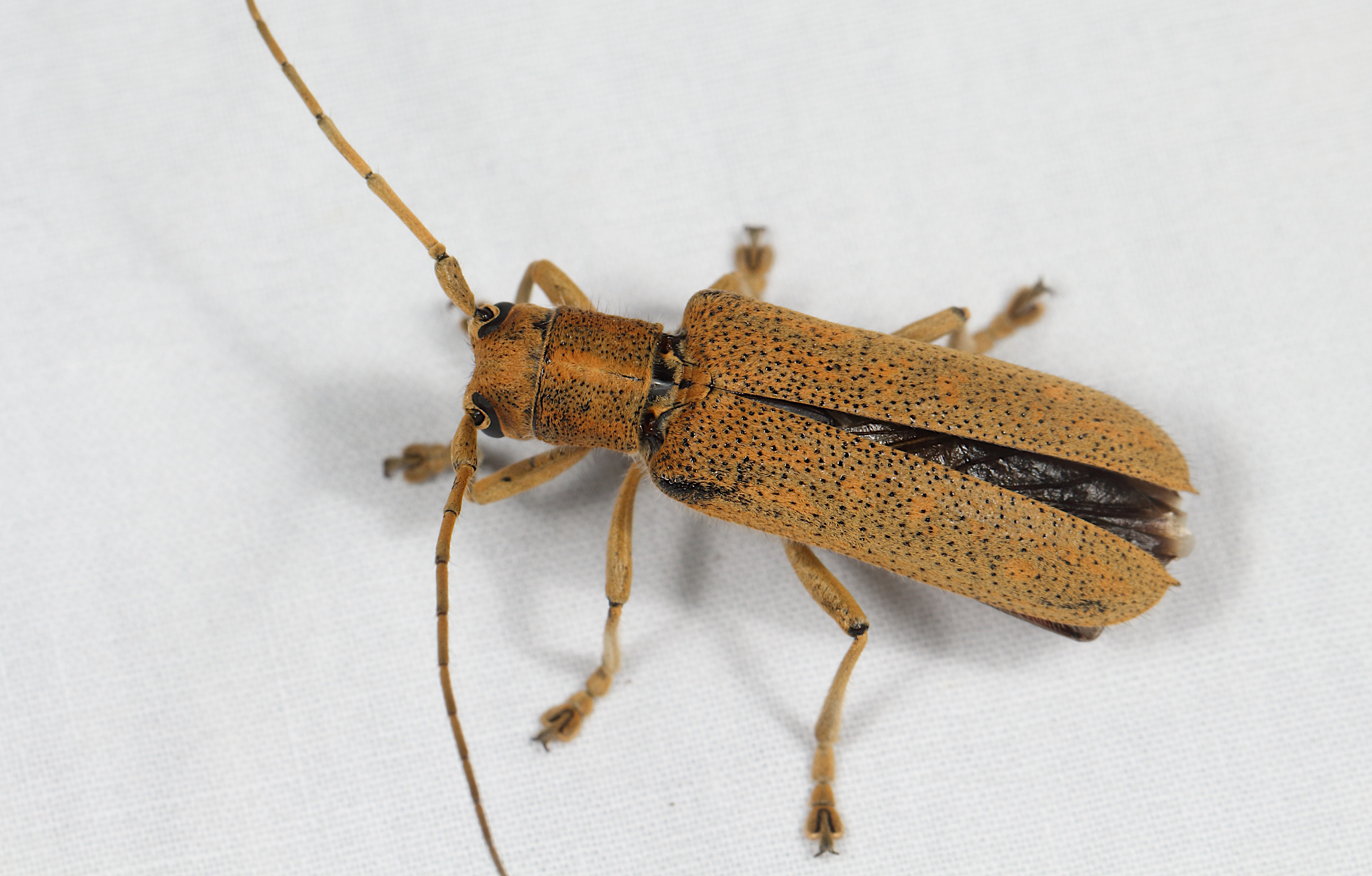 Next is one of the giant caddisflies (I think from the genus Ptilostomis). These insects resemble moths, but they are from a related insect order. Their larvae are aquatic. 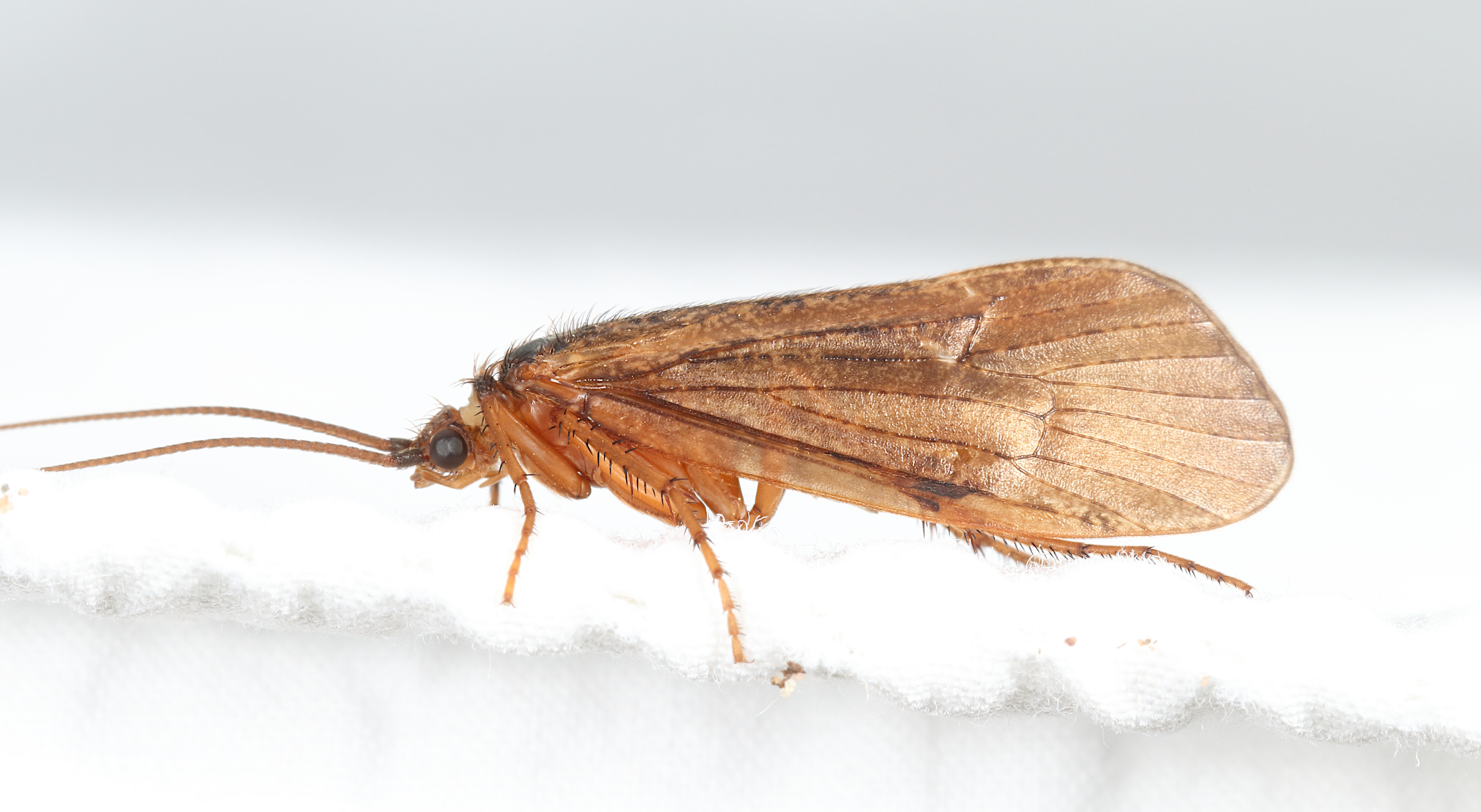 Next are actual moths. These include, in order, the common gluphisia (Gluphisia septentrionis), and the forest tent caterpillar moth (Malacosoma disstria). I was having a lot of trouble identifying that last one, but the crack team at BugGuide leapt into action and provided the name. 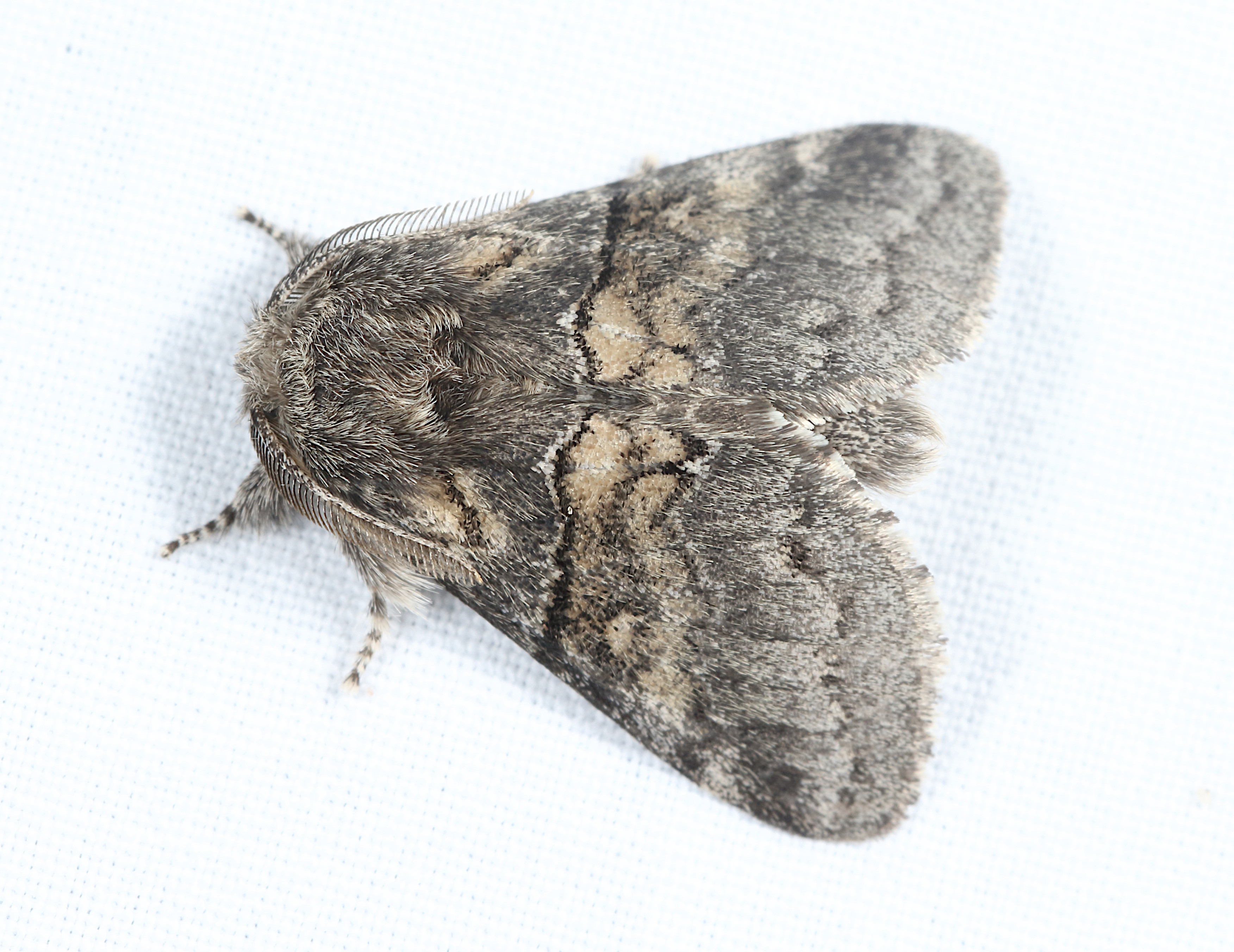 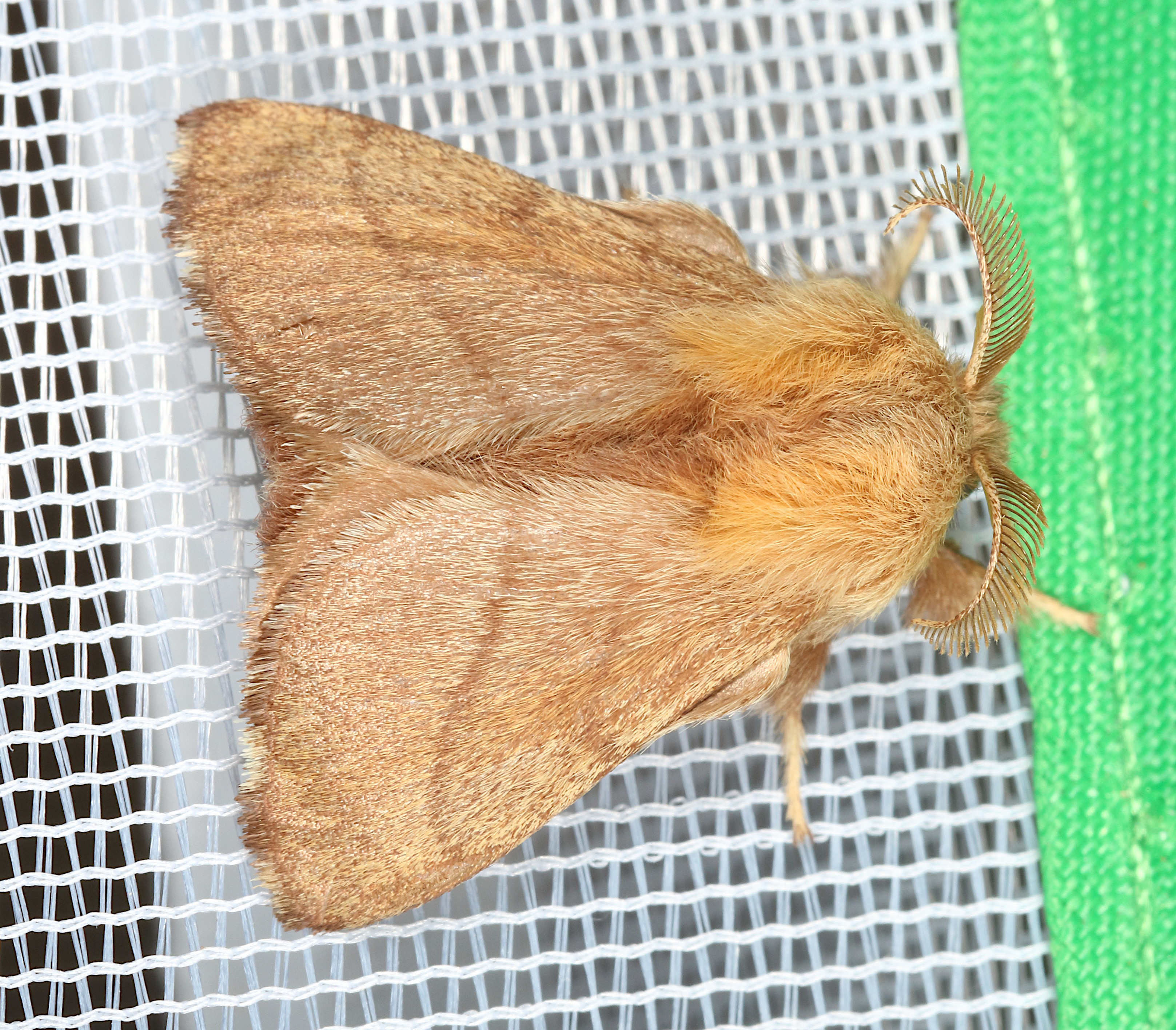 Finally, here are two elegant examples from the Geometrid family. First is the tulip tree beauty (Epimecis hortaria), and then the adult of the lesser maple spanworm (Macaria pustularia). This picture is two years old, but I still enjoy just gazing at the ethereal details of that moth. 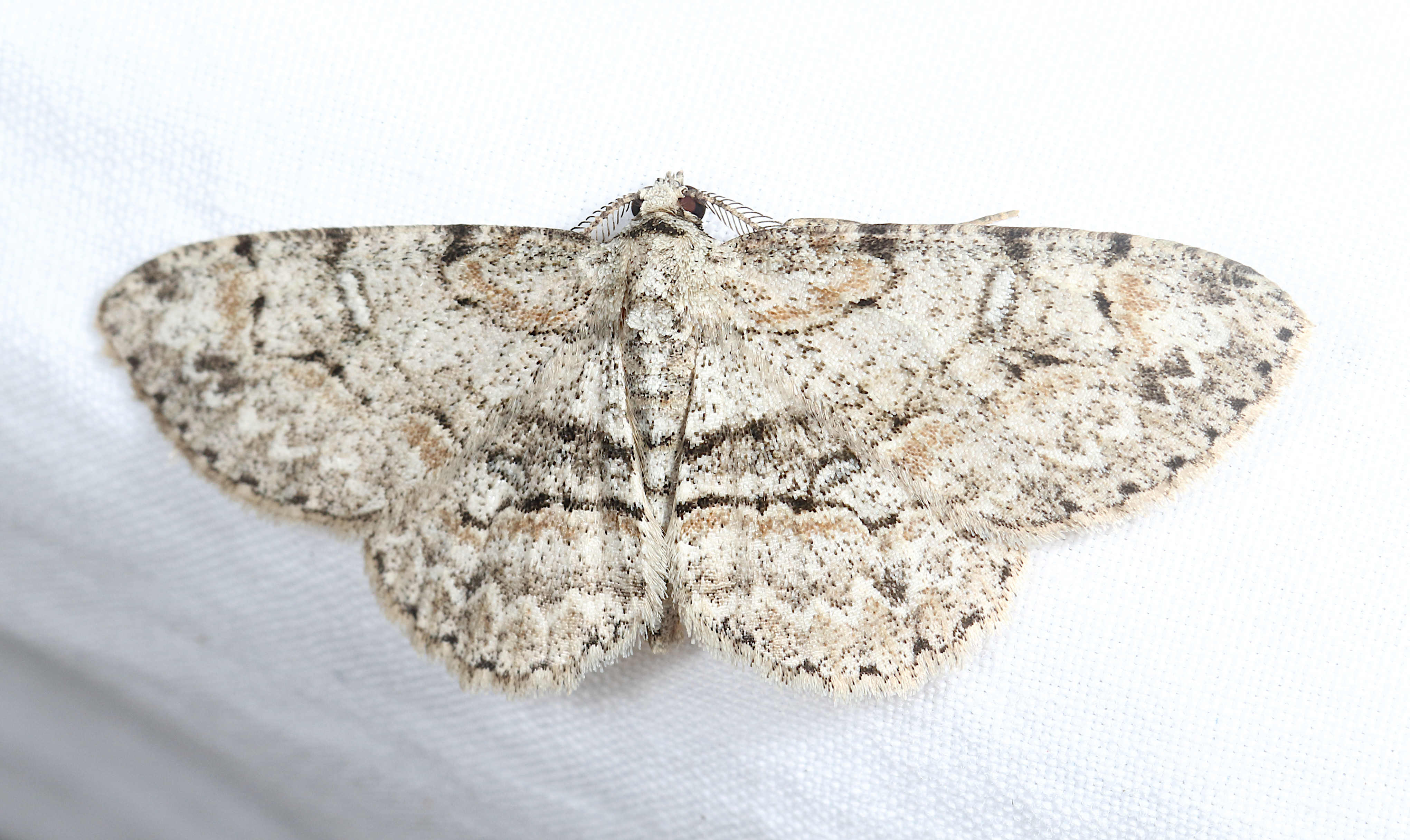 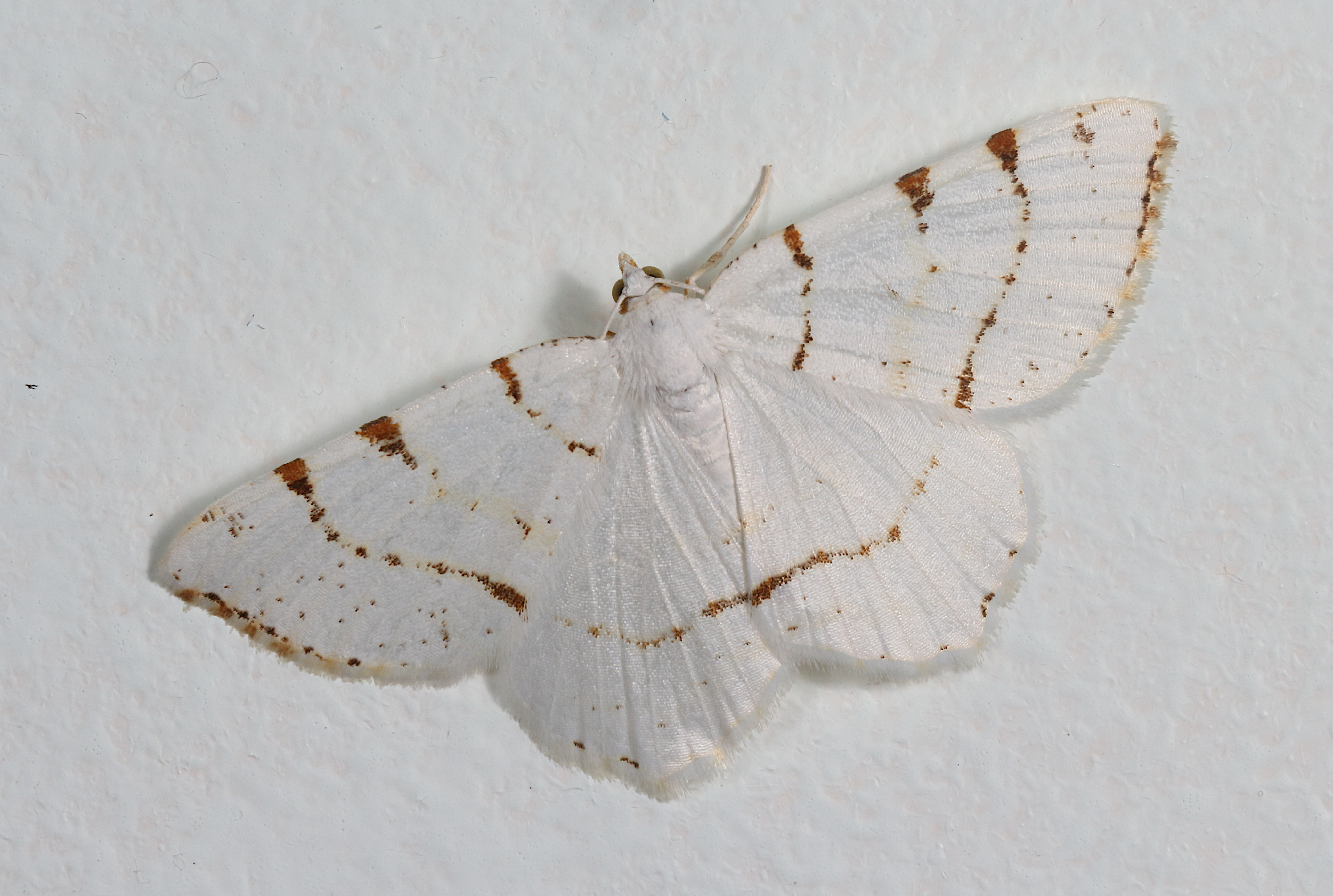