The official website of the government of Sweden proclaims this:

Sweden has the first feminist government in the world. This means that gender equality is central to the Government’s priorities – in decision-making and resource allocation. A feminist government ensures that a gender equality perspective is brought into policy-making on a broad front, both nationally and internationally. Women and men must have the same power to shape society and their own lives.

There’s also a photo (I’m not sure which officials are included) with more than half of the people being women:

And of course this is great. Sweden has been a pioneer in implementing the policy noted above, including a parental-leave policy that funds leave for both mothers and fathers—and you get financially penalized if the dad doesn’t take leave. So what happens when the feminist Swedish government sent its Prime Minister (Stefan Lofven) as well as its its trade minister (Ann Linde) and a delegation to Iran—a delegation that included 11 women?

What happened you can see below: all the women not only wore hijabs, but also longish coats to cover their lust-inciting bodies. Nor did they shake hands with any of the men, for even that gesture is barred in Iran, though I’m not sure whether it’s illegal.  Now as the Washington Post reports,

By law, women are required to cover their hair and wear loose-fitting clothes when they appear in public in Iran, a country governed by a conservative Islamic elite. Many choose to wear loose-fitting hijabs, like the one worn by Linde in the picture [below].

These rules require international visitors to dress modestly even if they are only in the country for a short time. 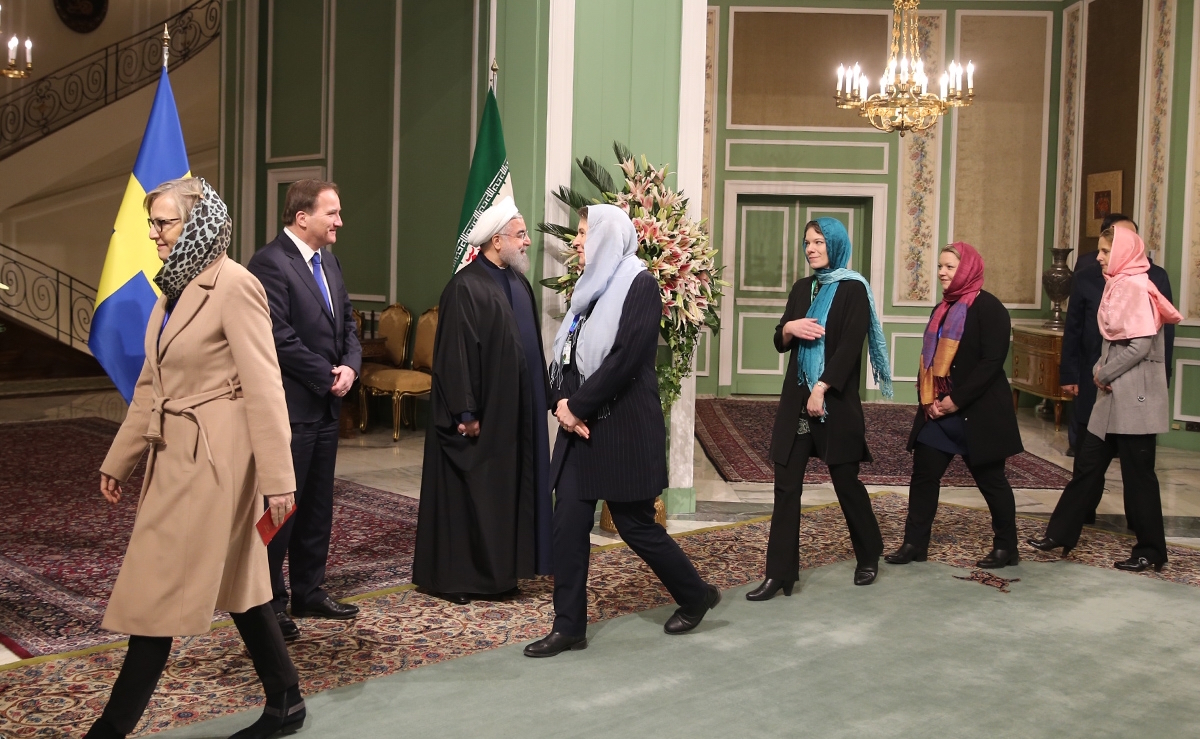 Linde was heavily veiled when she signed a document next to Iran’s vice president for women and family affairs:

Here’s Linde deferring to the custom that women not shake hands with men—in this case, Iranian President Rouhani: 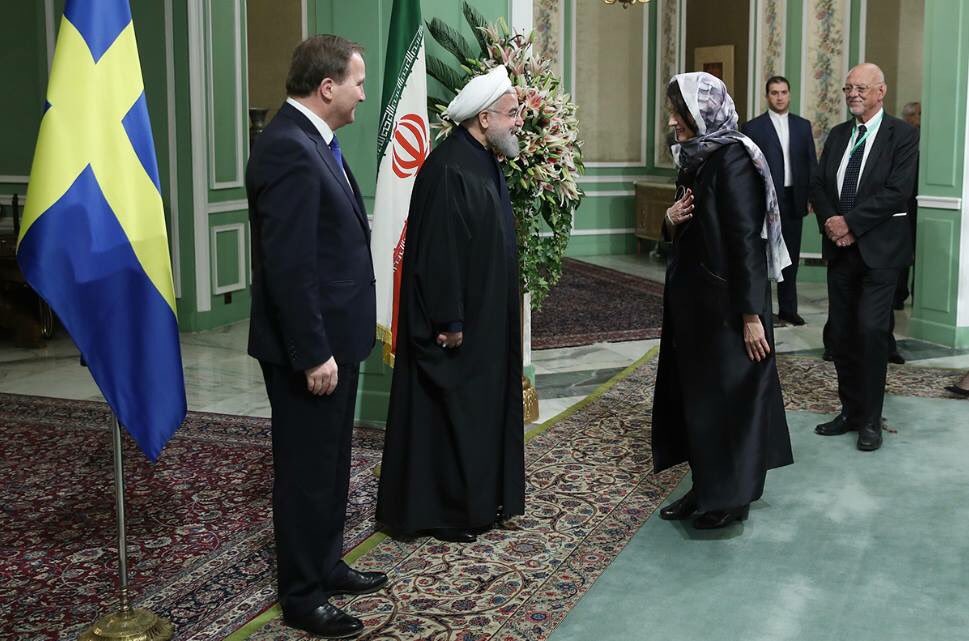 While it is the law that women, including foreigners, should be veiled in Iran, I doubt that they are required to wear long coats.

The feminist government has received the expected pushback for complying with laws that are religiously based and stem from the idea that it’s a woman’s responsibility to cover her shameful body lest she incite the uncontrollable lust of men. As the Post reports:

“By actually complying with the directives of the Islamic Republic, Western women legitimize the compulsory hijab law,” Alinejad [an Iranian women’s rights activist see below] wrote on Facebook. “This is a discriminatory law and it’s not an internal matter when the Islamic Republic forces all non-Iranian women to wear hijab as well.”

Alinejad later shared to Facebook a recent image of Sweden’s deputy prime minister Isabella Lovin signing a document with an all-female staff behind her. That image recently went viral, as many viewed it as a criticism of President Trump’s abortion policies. “Trump’s words on women are worthy of condemnation; so are the discriminatory laws in Iran,” Alinejad wrote.

Speaking to Expressen, Linde said she had not wanted to wear a headscarf. “But it is law in Iran that women must wear the veil. One can hardly come here and break the laws,” she explained.

Other Swedish politicians were more critical. Jan Björklund, leader of the opposition Liberals party, told Aftonbladet newspaper that the headscarf is “a symbol of oppression for women in Iran” and that the Swedish government should have demanded that Linde and other female members of the delegation be exempted from wearing it.

You remember that FIDE, the international chess federation, also has a statement that “rejects discriminatory treatment for national, political, racial, social or religious reasons or on account of gender”, but required women chess players of all nationalities to don the hijab for the world chess championships in Iran, which is underway right now. Many women refused to participate because of the hijab requirement, including American chess champion Nazi Paikidze. Wikipedia names others, some of whom may have different reasons:

Hou Yifan, the reigning women’s world champion and top ranked female player, decided not to enter the tournament because of dissatisfaction with FIDE’s Women’s World Championship system. The 2015 Women’s World Champion, Mariya Muzychuk, and current US Women’s Champion Nazi Paikidze also elected not to attend, out of protest at the tournament’s location in Iran, where it is mandatory for women to wear the headscarf in public. Other notable absentees are women’s world number 4 Humpy Koneru and 7-time US Women’s Champion Irina Krush.

Now the case of Sweden is less clear cut, as of course countries have to maintain relationships with each other. But I think it goes too far to force non-Muslims (or anybody) to adhere to religious dictates while they’re not in a house of worship. And of course wearing hijabs in Iran is not a choice: it’s compulsory, and has been so since 1979. In the end, it seems to me that the Swedes should either not have gone to Iran, told the Iranians that they had to have the meeting in Sweden or in a neutral country, or insisted on not wearing the hijab.  As UN Watch notes:

“If Sweden really cares about human rights, they should not be empowering a regime that brutalizes its own citizens while carrying out genocide in Syria; and if they care about women’s rights, then the female ministers never should have gone to misogynistic Iran in the first place,” said UN Watch executive director Hillel Neuer.

The government has now come under sharp criticism from centrist and left-wing Swedish lawmakers, who said the ministers should not have deferred to “gender apartheid.”

Seth Frantzman at The Jerusalem Post is ever more exercised:

Countries that respect human rights and equality shouldn’t send delegations to Iran in the first place. It’s one thing to cover one’s hair or remove shoes when entering a house of worship, to observe the local custom, but when a country has vicious discriminatory laws forcing women to dress a certain way, it’s time for governments to say “no.” No meetings, no respect, no stamp of approval to fascist treatment for women.

If Iran can force foreign diplomatic delegations of women to wear large coats and cover up their hair, what if a government forced female diplomats to go topless? Would that be a red line? You may think it’s ridiculous – but why is it any more ridiculous to force women to disrobe then to force them to robe? If Iran can force women in a delegation not to present their hands to a male leader, lest he be “contaminated,” then why can’t Western countries force the Iranians to shake the hands of women and observe Western customs? It might offend them? You’d think, maybe, it is logical to show deference and respect for another culture if that culture and religion shows deference and respect for your way of life. But what happens when the Iranians visit Europe? Italy covered up nude statues so as not to offend the Ayatollah.

. . . Beyond being honest in our language, we need to have a different policy when it comes to Iran and Saudi Arabia and regimes like them. We must demand that Rouhani’s delegations to the West consist of Iranian women dissidents, such as those imprisoned for attending volleyball games, or he won’t be allowed to come. Saudi Arabian diplomats must be forbidden to drive when they visit, and their male diplomats in our societies will have to ask permission from women who will be appointed their guardians before they travel.

Here’s a video of Iranian women’s rights activist Masih Alinejad, founder of the My Stealthy Freedom page (where women take off their hijabs as a protest; see here as well), urging Western politicians not to obey these compulsory hijab laws. Alinejad refutes four arguments that Westerners use to justify wearing the hijab in Iran. Needless to say, Alinejad doesn’t live in Iran, where she’d be arrested (or worse): she’s living in exile in the UK. Note that when she got a visa to the US specifically to interview Barack Obama, he refused the interview.

This is a brave and heartfelt plea, and at 8:20 Alinejad waxes particularly eloquent, calling European female politicians “hyocrites” for bowing to hijab laws. At least listen to the last minute, and if you like that video, watch this one on the My Stealthy Freedom campaign.

So I quail at a feminist government obeying laws designed to oppress women. In the end, I don’t think the Swedes should have gone to Iran and obeyed their misogynistic laws. Similarly, if Israel required visiting male diplomats to wear yarmulkes during a diplomatic meeting, or stipulated that women couldn’t shake hands with men, I’d decry that, too.

But I’m interested in readers’ views, particularly from women, so weigh in below.