The days are gone when I was compelled to take apart papers about feminist glaciology or the unbearable whiteness of pumpkins, yoga, and Pilates. This kind of insanity has become daily fare, and one no longer has to wonder whether it’s a parody or not—it isn’t.  Below, for example, is a long screed about how French food is the apotheosis of white cuisine, ergo is white supremacist, racist, and colonialist. You can read it, but the laughs quickly diminish as you realize that author Mathilde Cohen is absolutely serious in her contentions.

Now it’s no surprise to readers here that I’m a big fan of French food. But I’m not that keen on the the haute or nouvelle cuisine that’s pricey and comes in small portions. I prefer bourgeois cuisine, what the regular people eat who aren’t so poor that can’t afford any decent food. Give me a cassoulet, a coq au vin, a good steak frites, or a haricot mouton, and I’m in paradise—so long as there’s endless bread and a decent bottle of wine. But it turns out that, to Mathilde Cohen, the whole megillah of French food is white, white, white, as well as colonialist and oppressive. Now nobody will deny that France has been a colonial power, and that racism persists in France. But to assert that racism is embodied in the cuisine is an insupportable claim.

Her argument, which I claim works for any cuisine from white countries (or indeed, any cuisine anywhere), is to connect food, which is invariably something a nation prides itself on, with some bad trait of the nation, and then say that they’re connected because they’re both part of the same country. I kid you not! Here’s the abstract!

Food is fundamental to French identity. So too is the denial of structural racism and racial identity. Both tenets are central to the nation’s self-definition, making them difficult, yet all the more important to think about together. This article purports to identify a form of French food Whiteness (blanchité alimentaire), that is, the use of food and eating practices to reify and reinforce Whiteness as the dominant racial identity. To do so, it develops four case studies of how law elevates a fiction of homogeneous French/White food as superior and normative at the expense of alternative ways of eating and their eaters—the law of geographical indications, school lunches, citizenship, and cultural heritage.

Well, Galoises cigarettes and polite behavior (politesse) are fundamental to French self-definition, too, and yet do we want to see papers on how they’re connected? What about fish and chips and a love of the British monarchy? In fact, most European countries, even if they have racial friction, “deny structural racism or racial identity”, and try to assimilate immigrants.

One of Cohen’s beefs is that France, when deciding to confer citizenship on someone, looks for evidence that they’ve assimilated to some degree into the culture. To her—and she really has to stretch to make this argument— this means eating the national dishes. But that’s bogus, as there are plenty of French citizens who eat the food of their ancestors. Algerian food like couscous, for example, is so ubiquitous that it’s almost a French food now. (Cohen also argues that in this transformation it’s somehow become “white”.) And she has not the slightest evidence (well, she has one dubious anecdote from 1919), that eating French food is considered evidence of
assimilation.”

But I digress. I’ll just reprise her four arguments and pass on (or pass out):

The law of geographical indications.  This is the French use (and not exclusively French; Italians and other countries do it, too) of controlled appellations, so that a food or drink must be from a specified region of origin to be labeled as such. Champagne is the classic example, as it has to be made in the Champagne region of France. American bubbly or Spanish cava cannot be labeled “champagne.” Likewise with Roquefort cheese, as I recall. This system designed to give the consumer some confidence in the quality of the product, but Cohen says these are signs of French colonialism and “the racialized project of ensuring that the White majority can maintain its foodways and agricultural wealth.”  Enough said.

The law of school lunches.  France specifies a school lunch programs, with many lunches offered cheaply or free to poorer kids. The food is hot and designed to be nutritious. What foods are offered differ among municipalities. What Cohen objects to is that the cuisine doesn’t cater to special diets, even though Cohen adds that many schools “quietly accommodate students with religious based dietary restrictions”. Students are also allowed to bring lunches from home.  This is part of the French tradition of laïcité , or secularism, avoiding entanglement of religion and government.

Cohen says that this is imposing Christian whiteness on the school food, though Wikipedia contradicts her, saying “food menus served in secondary schools pay particular attention to ensuring that each religious observer may respect his religion’s specific restrictions concerning diets.”  Since I don’t know the truth, I’ll pass on.

The law of citizenship. People applying for citizenship in France need not be white, as you’ll notice immediately when you see the high proportion of North Africans, Asians, and black Africans in the big cities. What exercises Cohen is that prospective citizens must show some evidence of assimilation, though of course not full assimilation. The implication is that assimilation requires adoption of French food, but this doesn’t appear to be the case. Sohen gives only one example, and that’s from 1919:

To illustrate, in 1919, one Ignace, born in Madagascar to a Malagasy mother, applied for citizenship on the ground that he was the unrecognized son of a French national. The records of the Antananarivo colonial civil bureau contain a memo mentioning approvingly his service in the French Foreign Legion during the war, his seriousness and humility, before scrutinizing his lifestyle. A shift in Ignace’s dwelling and diet is observed. Before the war, Ignace “lived with his mother . . . in a simply furnished cottage kept in the indigenous style [à l’indigène]. The basis of their diet was rice.” Upon returning from the front, Ignace moved in with a Greek friend from the Legion. The memo observes that now “he always eats with this European and is nearly constantly in his company,” concluding that the application should be granted. While Ignace’s service in the armed forces is the primary basis for the positive appraisal, his transition from the typical rice-based, Malagasy diet despised by colonists to a “European” diet clearly militated in his favor.

. . .Ignace’s renunciation of rice and eating on a mat on the floor together with his commensality with a White man must have been assessed as signs of White enculturation and performance

She must have dug hard to find the story of Ignace! Now Cohen doesn’t say that Ignace abjured rice, only that he “ate with a European.”  At that, brother and sisters, friends and comrades, is the totality of Cohen’s “citizenship” argument for the whiteness of French food. She mentions people being denied citizenship for other reasons, like gender segregating in their homes, but that has nothing to do with food.

The law of cultural heritage. This rests solely on UNESCO’s having designated the “gastronomic meal of the French” as an item on its list of “intangible cultural heritage” items. This is defined “as a four-course repast beginning with apértif and ending with digestif, served with appropriate wines and tableware, and made up of carefully chosen components.”

Why is this racist and expressive of Whiteness? Cohen tells us:

The creation and defense of the idea of a gastronomic meal of the French involved erasing not only the diversity of eating practices of French citizens across races and ethnicities, but also among Whites, essentializing a supposed innate national (and racial) character. For Ruth Cruickshank, “[t]he repas gastronomique des Français seeks to solve a perceived problem of French decline by inventing a codified ‘French’ meal which, as well as eliding cultural diversity, fails to grasp how food cultures survive by maintaining their currency through the negotiation of change and the accommodation of external influences.” In short, it is a White washed (and bourgeois) version of French foodways which is now consecrated by the World Intangible Heritage List.

Give me a break! The diversity of eating practices remains in France, but you can’t make a diversity of habits an “intangible cultural heritage”. It would be a different list in Italy, with antipasto, pasta, contorno, etc., and in China it would also vary among provinces, but would include multiple courses served at once, usually with rice or another starch, and the dishes often stir fried. Just because each nation has some characteristic ways of eating, as does France, does not mean that France is trying to enshrine whiteness. Let me add that the “heritage” French meal is something that should be experienced, and something I love, for it’s not just dinner, but theater as well.

Such is Cohen’s argument for the Unbearable Whiteness of French food. It’s much worse than I make out here, as the whole essay is larded with the usual jargon and with arguments that have nothing to do with her main point. The poor scholar must be hard up for topics to write about.  And yet she threatens to continue!

This article connects critical Whiteness studies and food studies in the French context. It has shown that the set of eating habits known as French are racialized in a way that reinforces White dominance. The four cases studies examined here—geographical indications, school lunches, citizenship law, and world heritage law—buttress an ideal of White alimentary identity implying that non-White and non-Christian communities are insignificant, alien, or deviant. Law has been a primary tool to shape food production and choices, privileging and normalizing certain alimentary practices and stigmatizing others. The current legal regime marginalizes racial and ethnic minorities in their foodways through the elevation of White French food as the high status, legally protected food.

By the way, I found the description of the author at the end, well, interesting. . . .

Mathilde Cohen is the George Williamson Crawford Professor of Law at the University of Connecticut and formerly a research fellow at the CNRS. She works in the fields of constitutional law, comparative law, food law, and race, gender and the law. Her research has focused on various modes of disenfranchisement in French and U.S. legal cultures. She has written on why and how public institutions give reasons for their decisions and the lack of judicial diversity. She currently examines the way in which bodies coded as female are alternatively empowered and disempowered by the regulation of the valuable materials they produce and consume, in particular milk and placenta. 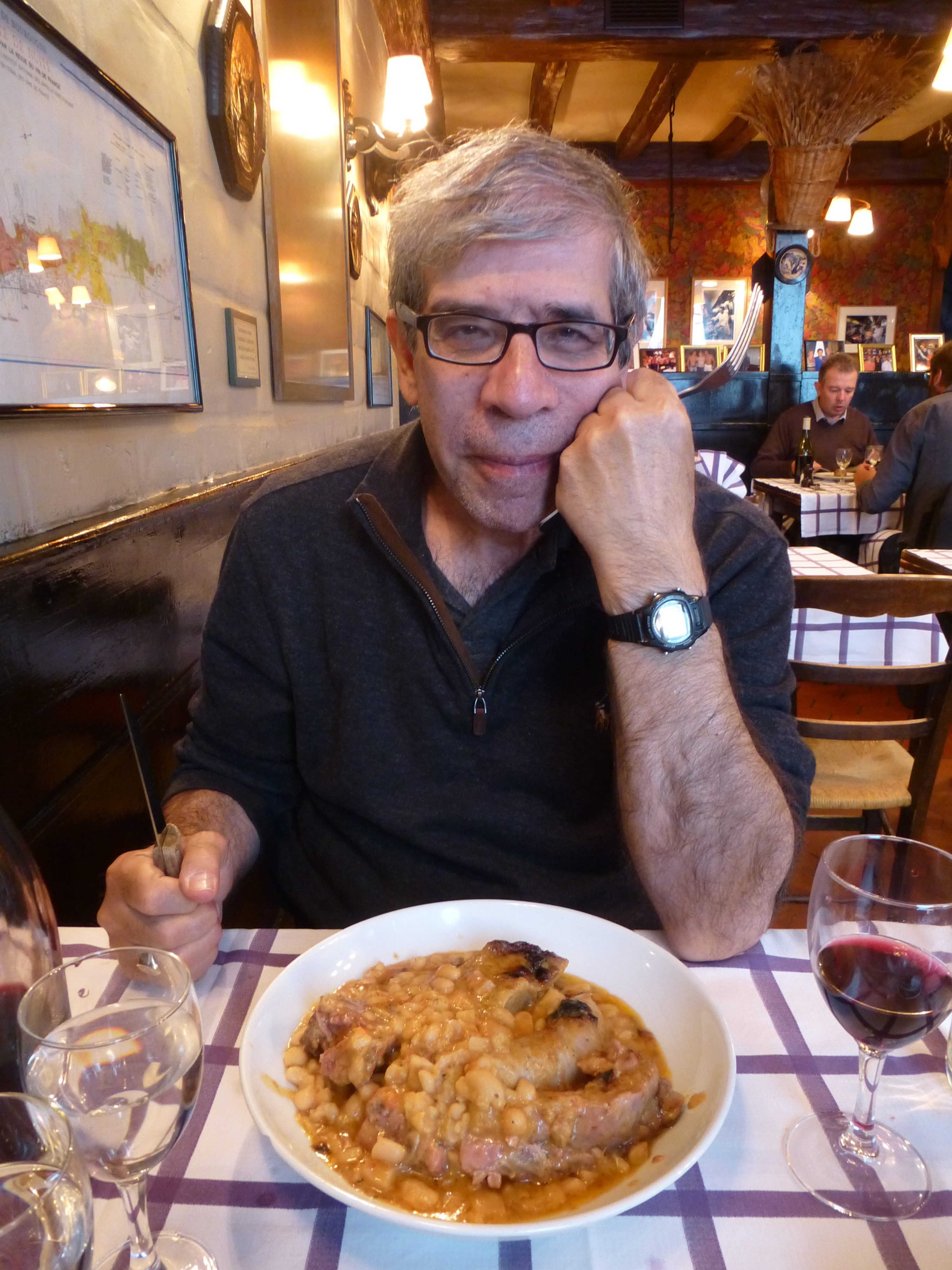 66 thoughts on “Unintentional humor of the day: Why French food is racist and expresses white supremacy”