This new article from the Foundation for Individual Rights in Education (FIRE) tells a dire tale that is documented with a recording.

On April 14, the University ran a professional development workshop for grad students and instructors dealing with “Anti-Racist Rhetoric & Pedagogies”. In this workshop, the instructors were taught how to make students shut up about certain topics, steer them and bend them to a woke ideology and, most offensively, how to threaten students with lower marks (or reporting to the administration) if they didn’t write the right stuff in their assignments. Click on the screenshot to read (and hear):

Of course it’s not illegal under the First Amendment to prevent students from disrupting classes, nor is it illegal to make them regurgitate material you’ve taught them, even if they don’t accept it. (In my evolution classes here, for instance, I sometimes had some creationist students, but they were graded on their ability to answer questions under the assumption that what I taught them was true. But I never made them accept evolution if they rejected it.)

Here’s the one-hour video of the U of O Zoom session. FIRE has highlighted it with time stamps certain parts that are worrying:

The workshop in question trains instructors on how to eliminate disfavored but constitutionally protected expression from the classroom and guide assignments and discussion into preferred areas — all for unambiguously ideological and viewpoint-based reasons. FIRE’s concerns are further compounded by the University of Oklahoma’s brazen and unconstitutional track record of putting individual rights out to pasture.

. . .But it’s not just racism the presenters encourage participants to root out.

One of the workshop leaders, Kelli Pyron Alvarez, explained in the recording how undergraduate students in one of her introductory English courses are “a little bit more emboldened to be racist” (17:17). To combat this, she forbids huge swaths of classroom speech, including “derogatory remarks, critiques, and hate speech,” as well as “white supremacist ideas or sources,” unless the student is using those sources to dismantle racism.

If you are wondering what sources or ideas are off limits because they fall into Pyron Alvarez’s subjective categories of white supremacist sources or “derogatory remarks” — well, she never specifies, so you should be.

Making a mistake can cost you: “If they use any of those things, if any of those come through in their writing or in their comments, I will call them out on it.” (18:20)

And if it happens again, “report them.”

Report them! To whom? Remember, as a state school, the University of Oklahoma must adhere to the principles of the First Amendment, and cannot penalize students for simply believing things that the instructors frown on. But wait! There’s more!

. . . Fairly early in the training, Pyron Alvarez addresses the potential reluctance faculty members might have toward putting a heavy hand on student speech. “One of the fears is that we’re going to get in trouble for this, right?,” she says. “Like we can’t tell students that they can’t say something in class. But we can! And let me tell you how.” (17:45)

Pyron Alvarez’ fellow workshop leader Kasey Woody later goes into some detail on how instructors can “steer” students away from “problematic territory” to accomplish this. (46:01)

“I, in this case, usually look for my students who might be, like, entertaining the idea of listening to a problematic argument. Then I say, ‘we don’t have to listen to that.’” (45:45)

That’s right — even thinking about listening to a disfavored argument is apparently to be discouraged.

Woody later reassures the instructors that they won’t face consequences for censoring students: “You do not need to worry about repercussions at any degree in the university if you are responding to a student who is using problematic language in the classroom.” (49:42)

And who gives them the green light to censor OU students? According to Pyron Alvarez, that permission comes from the highest court in the country.

“The Supreme Court has actually upheld that hate speech, derogatory speech, any of the -isms do not apply in the classroom because they do not foster a productive learning environment. And so, as instructors we can tell our students: ‘no, you do not have the right to say that. Stop talking right now’, right?” (20:05)

Now that is just wrong. The Supreme Court has said that speech on school grounds that causes “material and substantial disruption” of school functions can be punished. But what doesn’t “foster a productive learning environment” now becomes the judgment of the U of O instructors, and “material and substantial disruption” doesn’t seem to be what the OU trainers are addressing here—unless they adhere to the false mantra that “offensive speech is violence.”

Some of the responses from workshop participants indicated that they understood how what they were being told to do was out of the ordinary, and expressed reservations about it. One workshop participant asked whether instructors are doing a disservice to their students by censoring certain topics. The participant asked how to identify problematic arguments and whether, for example, a student should be able to examine if the Black Lives Matter movement should refrain from property damage. In response, Pyron Alvarez suggests telling students to “re-adjust” their topic if they’re “bordering” on being offensive. (53:05)

It goes on, and doesn’t get better. FIRE wrote the University about this, and at first they refused to respond. Finally, yesterday UO Chief Diversity officer Kesha Keith responded, but it was a non-response. Keith asserted that the University “unequivocally values free expression and the diversity of all viewpoints”, but that’s not what the video shows. Keith also says that participation in this session was voluntary, but instructors are required to attend at least two of nine workshops.

On April 8 I reported that when FIRE wanted to see this Zoom session, the U of O stipulated very specific conditions:

The university’s March 23 response — more than four months after our request — said that FIRE would be permitted to view the training materials, but only in person on OU’s campus in Norman, Oklahoma. In other words, in order to view public records, the University of Oklahoma would require a FIRE staff member to fly across the country (FIRE is based in Philadelphia) during a global pandemic. That’s not exactly a transparency-friendly approach to public records, and it all but ensures that public records remain private.

It looks as if the U of O will continue this training—training that is effectively propaganda and also involves lying about student rights.

What can you do about it? At the bottom of the FIRE page is this form, and all you have to do is fill in your name and email address and press “send”, which will send the message at the bottom. I’ve already done that.  Read FIRE’s report, and if you agree that this kind of training  violates the rights of students, fill in the form and click. The only way we can stop the propagandizing of students and the discouragement of “speech” that the instructors don’t like is to speak up! 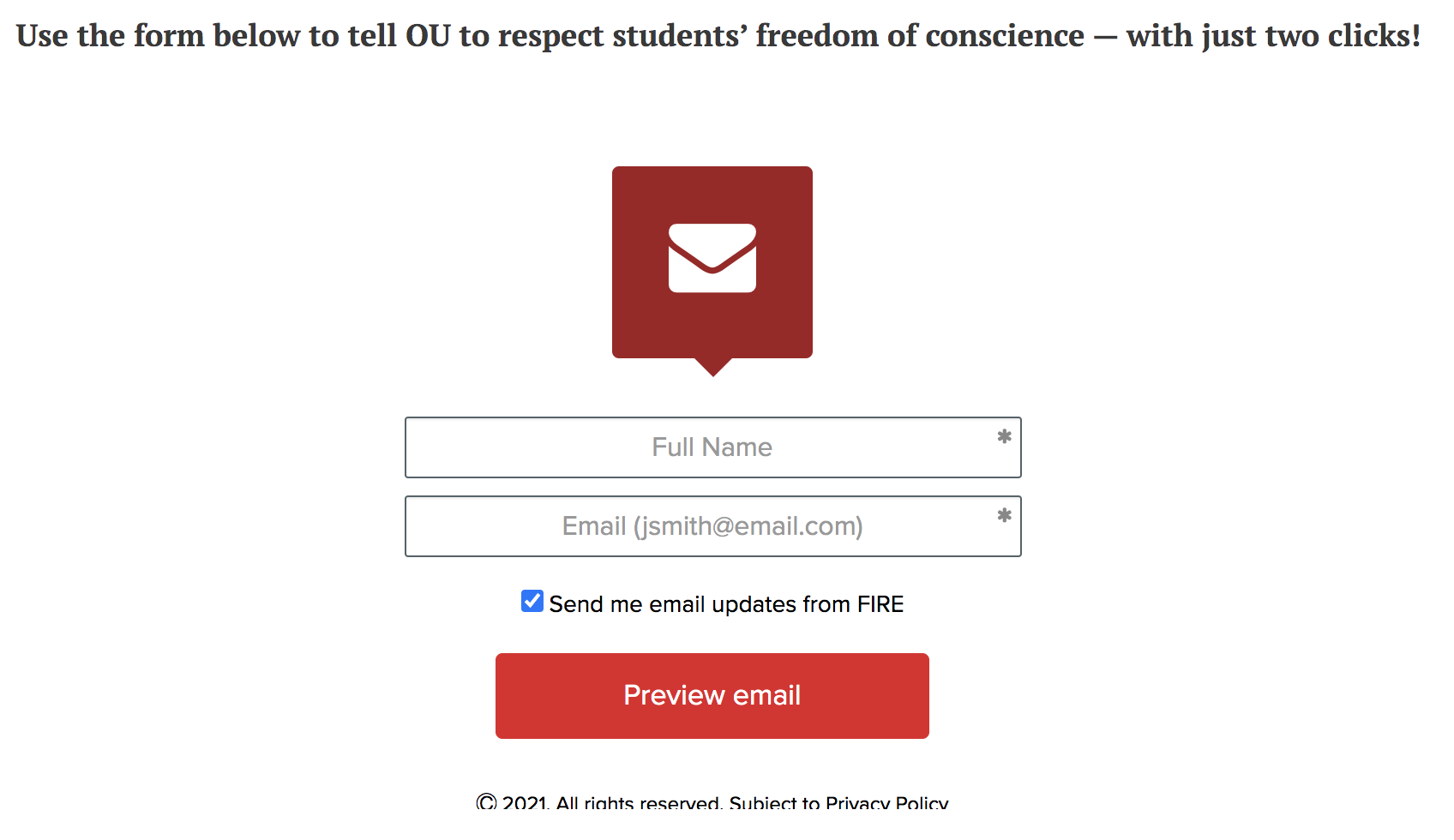 The message that’s automatically send under your name.

I am concerned about the state of free expression and freedom of conscience at the University of Oklahoma. Multiple instructor training sessions indicate that student and faculty individual rights are in jeopardy.

OU is a public institution, obligated to respect student and faculty rights. We call on you to ensure that individual rights are not violated at Oklahoma’s flagship institution.

Demanding ideological uniformity is a violation of students’ constitutional rights.