Is an course on “race, power and justice” an essential part of a liberal education? The University of Minnesota’s (faculty) senate, has declared “yes.
as reported in the student newspaper, The Minnesota Daily. 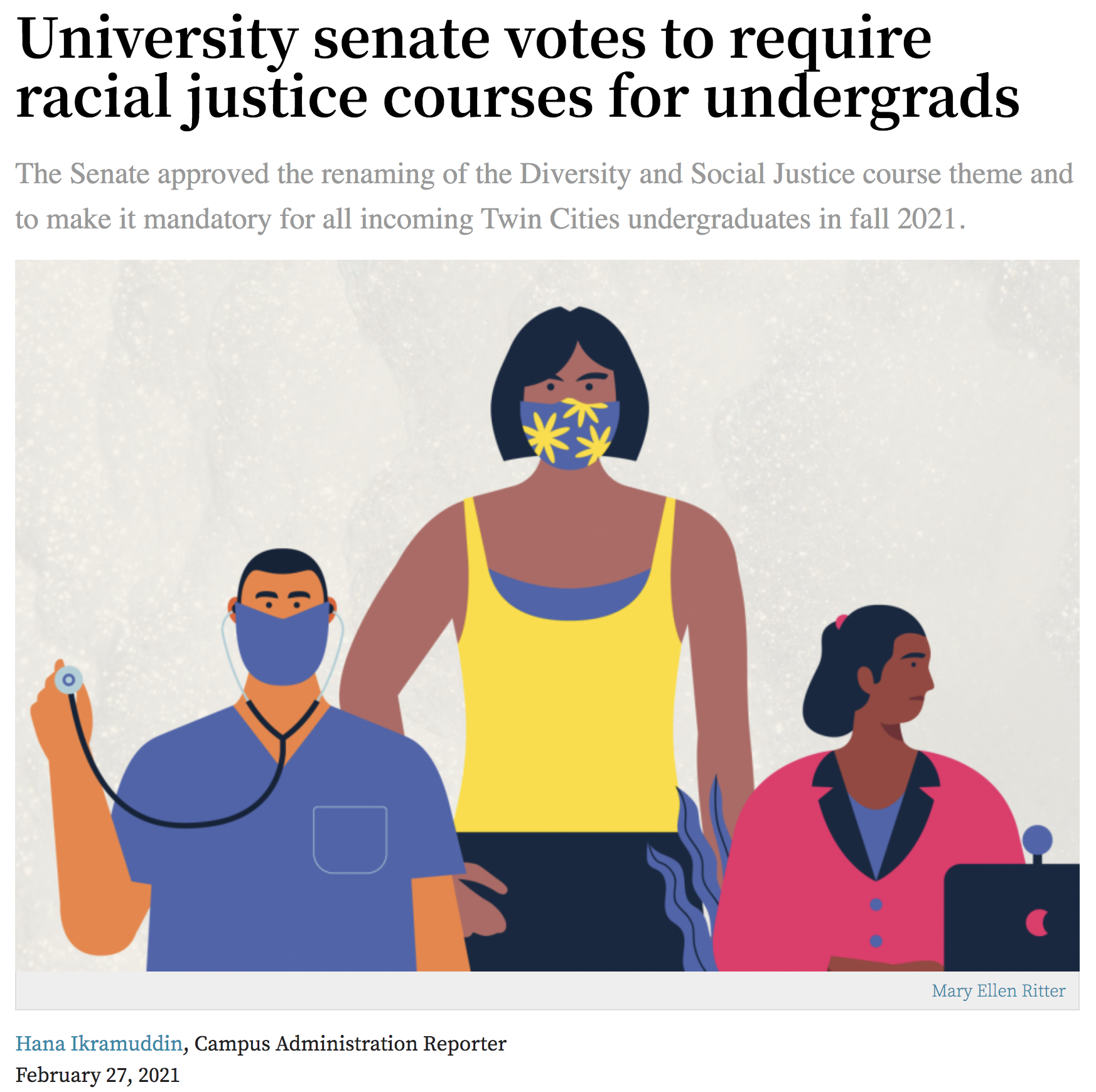 Up to now, all undergraduates at UM were required to take four courses from the five “themes” available (multiple courses are offered under each “theme”): civic life and ethics, diversity and social justice in the U.S., the environment, global perspectives, and technology and society. Now the “diversity and social justice” theme has been renamed “Race, power and justice in the United States” (RPJ), and that theme is no longer one you can omit: it has, as of next year, become an obligatory course. (It will apply only to incoming students, not ones already at the University of Minnesota.)

According to the chair of a faculty group that vets liberal-education courses, “this proposal was created in response to a request from Executive Vice President and Provost Rachel Croson following the police killing of George Floyd last summer.” But that chair, Kathryn Pearson, also said this:

“We’re failing our students if we don’t make them aware of systemic racial inequality and give them the tools to analyze it and its implications,” Pearson said. “Minnesota has some of the worst racial inequities in education, housing, health care, criminal justice, the environment. And most recently, it’s the site of George Floyd’s murder.”

Well, it’s debatable whether George Floyd was “murdered”, a term whose definition is “a deliberate and premeditated killing”. I prefer just saying “killing”, for the trial of the officers accused of murdering Floyd hasn’t yet started, and we should wait for the verdict. Even here at the University of Chicago, some department statements—already in violation of University policy against making official political statements—pronounce George Floyd’s death a police “murder” done out of racism. (see here and here, for example).  They should hold off a bit!

At any rate, there is both approbation and pushback about the course at UM, but some of the pushback involves dubious statements about “emotional labor”, a phrase that bothers me because having emotions doesn’t seem like “labor” to me. But I’m splenetic today. The article continues:

“I think the University has a responsibility and a lot of ways partly just given where we are geographically, partly given what the objectives of higher education institutions are to equip students with a diverse worldview,” said Carter Yost, an MSA student representative, who co-led MSA’s endorsement of the new theme requirement. [JAC: What, exactly is a “diverse worldview”?]

“I think making this theme a requirement for students is a really great step towards better student understanding,” he said.

Some senate members expressed concern about the new requirement, such as the idea that requiring these courses could place additional emotional labor on students of color who have lived experiences with racial injustice.

Mattea Allert, the speaker for the Council of Graduate Students, said she feels the new requirement does not accurately address student needs.

There are two questions here:

1.) Is a course in Race, Power and Justice a good course to require all students to take? It’s surely timely, but is it important enough to make it the only course required of the five theme courses? I don’t know; I’m willing to be persuaded either way, but that depends on the answer to the second question.

2.) Is there a way to teach a Race, Power and Justice course without propagandizing the students into an accepted way of thinking, and without penalizing them for questioning the accepted wisdom? And you know what “wisdom” I mean: the Woke doctrine.

Reading the existing course guidelines for this theme, which are given below for the current courses, I’m not reassured. They will concentrate on “power and privilege”, an essential part of Critical Theory, and the course has a purpose: “to ensure that students’ educational experience and knowledge-base of the United States is inclusive of group and social differences.” That sounds like an educational purpose, but is really a political purpose, more or less telling the students how they will have to act. And because this violates requirement #2, it also violates requirement #1. My conclusion: given the fraught nature of the subject, combined with my near certainty that this is an indoctrination course in which only accepted viewpoints will be adumbrated and differences of opinion discouraged, this course should not be required.

Diversity and Social Justice in the United States objectives and criteria

Understanding the internal diversity of the United States and the complex ways in which diversity can be both an asset and a source of social tensions is integral to an informed, responsible, and ethical citizenry. Courses fulfilling the Diversity and Social Justice in the United States theme requirement may emphasize very different content and be taught from a variety of disciplinary or interdisciplinary perspectives. They promote historical and contemporary understanding of how social differences (such as race, ethnicity, class, gender, religion, sexual orientation, and disability) have shaped social, political, and cross-cultural relationships within the United States. More specifically, courses fulfilling this Theme will critically investigate issues of power and privilege, instead of merely promoting a surface-level “celebration” of diversity. The objective of this requirement is to ensure that students’ educational experience and knowledge-base of the United States is inclusive of group and social differences. Through this type of educational experience, our students will be better able to live and work effectively in a society that continually grows more diverse and inclusive.

Course must meet these criteria:

But it’s a fait accompli. Similar initiatives will soon be coming to a college or university near you.