I’ve put up two posts (part 1 and part 2 ) about Jodi Shaw, an employee of Smith College who worked as a student support coordinator specializing in “Residence Life”. Shaw had a beef with the College for forcing her to undergo mandatory training in what seems like Critical Race Theory, and in which she was humiliated by the facilitator for her “white fragility”. Read the two links at the beginning for the full story.

Kathleen McCartney, the President of Smith, then responded to Shaw’s first video with a cold-hearted letter to the entire College saying, in effect, something like, “Well, we can’t fire Shaw because of the law, but we’ll ensure that all students of color are protected from harm.”

Shaw, amazingly, continues to post videos, and she’s now up to six (her YouTube channel is here). From the outset it was clear that, at a place like Smith, Shaw would be completely demonized for bucking the established order, even though Smith College couldn’t fire her. Now she gets a profile in the conservative Spectator, which reprises her story—a story that many of you know—but also adds a bit more information. Click on the screenshot: 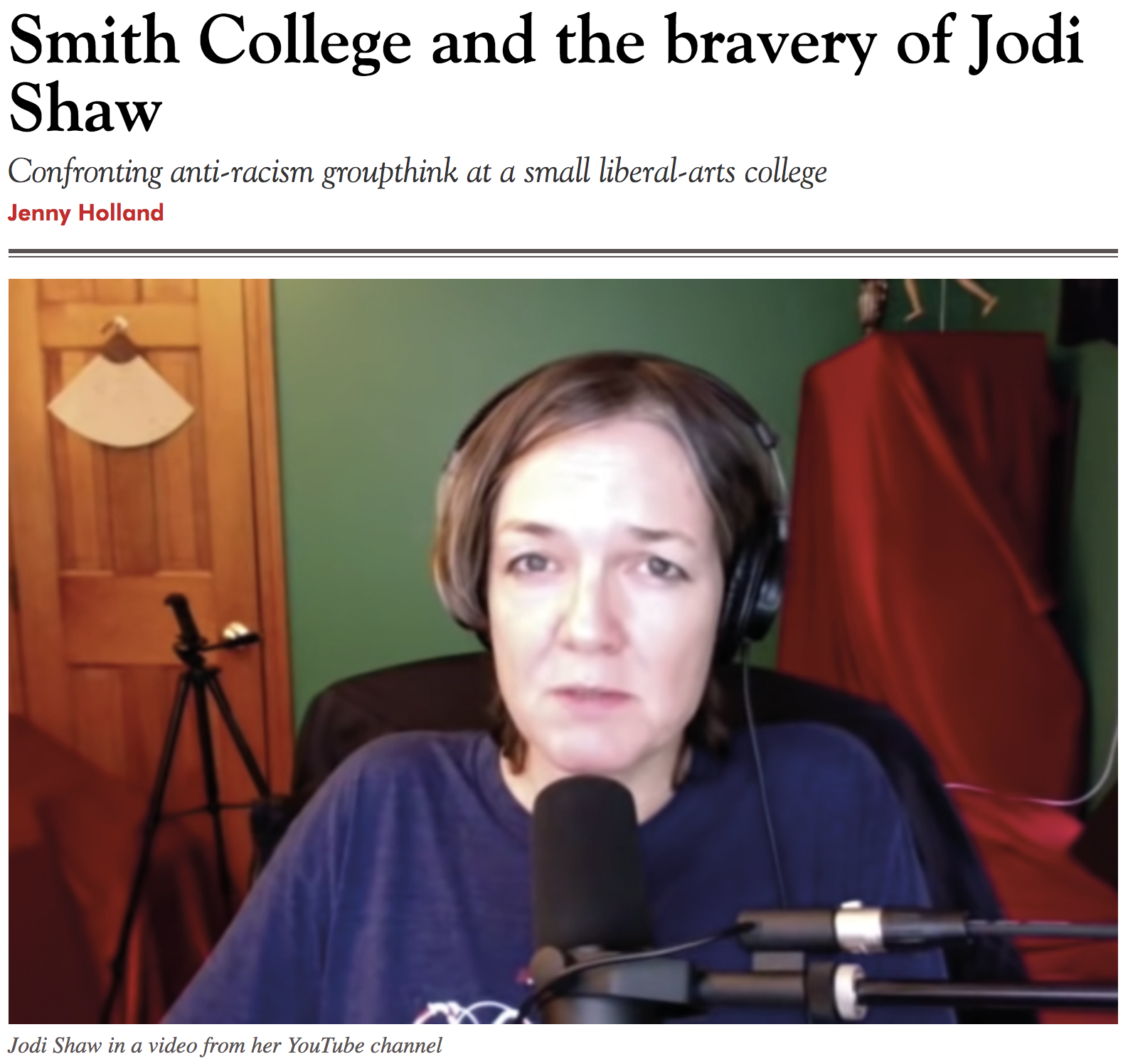 After her treatment by Smith, Shaw filed a 100-page complaint about her mistreatment in the anti-racism seminar, but, according to the article above, Smith College never responded.  Here’s the new information, which includes the report that she’s been put on paid leave, which is what they do to police who kill somebody. I’ve listened to several of her videos, and I’ll put one of the latest ones below. They’re calm and reasonable, and I’m stymied about why she was taken off her job.

You can get the old stuff by reading either my past posts or the first part of the article above. The following includes her liberal bona fides, her sad plans for a fallback career, and the fact that she’s been put on leave:

She filed a 100-page complaint with the college, alleging multiple individual acts of ‘race-based hostility and discrimination’, as well as examples of ‘a climate of fear, hostility, exclusion and intimidation for  its employees’. The complaint went nowhere.

Shaw is soft-spoken, thoughtful and modest. She’s the opposite of the emotional screamers who post videos of themselves having meltdowns about Trump, or the death of Ruth Bader Ginsburg. She also has serious hipster-woke credentials, having gone to Smith herself in the early Nineties, and lived in Portland and in Brooklyn, both hotbeds of self-loathing white people trying to atone for their race. She laughs at the irony of a person like herself becoming a poster child for speaking out about racism against white people. As a young woman, she was an actual card-carrying member of the Socialist Worker’s Party. At Smith, she called out people who used the word lame. ‘That kind of language policing, I participated in it,’ she told me.

She’s all grown up now, though, and, like most people, has matured beyond the censorious fervor so common among the young. And she has put her job and her credibility on the line, as she was just put on paid leave while the college investigates her actions. Unlike others from academia who have spoken out against critical race theory, Shaw did not have a secure, tenured, prestige job and/or a large platform. Her Plan B, should she lose her position at Smith, is to work for a maintenance company clearing snow and raking leaves. She’s a single mother. When I asked her why she put her neck on the chopping block over this, she replied: ‘because it’s just wrong.’

The staff are on the frontline of this ideological race war. But it’s wrong for everyone involved. The students, who pay exorbitant fees to study at Smith, are being dealt with — at least by the staff who manage the student living quarters, food halls and security — according to their race.

Why is it the very best colleges, places like Yale, Princeton, Harvard, Smith, and Bryn Mawr, that are especially subject to self-flagellation and accusations of system racism? I don’t believe it’s because those places are more racist that other colleges; in fact, I don’t believe they were “systemally racist” (i.e., had in place a structure that perpetuated bigotry against racial minorities) at all.

Her latest video about her own situation has this description:

A population of individuals cut off from their respective moral centers is a population capable of committing great atrocities. In this video I explore some of the psychic damage resulting from my involvement in Smith’s efforts to combat “systemic racism.” Specifically, how a belief in the notion of “white fragility,” combined with the fear of being branded a racist, necessitates betrayal of ones moral compass.

I think Shaw is pretty much alone: I suspect she has almost no allies at Smith. These videos are her way of expressing her feelings to people who will listen. In effect, she’s using the camera as a therapist.

I do not believe she is a racist, but she’s been treated like one because she refused to flagellate herself with the whip of Critical Race Theory. In fact, she seems to have been the victim of racism herself.   But she’s also right about the way anti-racism of a particular stripe is forced down the throats of students, faculty, and staff at many American universities.

17 thoughts on “Jodi Shaw, the gadfly of Smith College: Put on paid leave, nevertheless, she persists”