Which is worse, a Democrat accused of pedophilia or a Republican Senator questioning Biden’s victory? I ask because those of you who thought that Hachette’s cancelation of the book deal it made for Woody Allen’s memoirs—a cancelation I thought was bad form, as the publisher caved to its employees, and of course there was no evidence for the accusations against Allen—might ask yourself the same question about Simon & Schuster’s new cancelation of an upcoming book by Josh Hawley.

Yes, Senator Josh Hawley (R-MO) was one of those morons who was going to officially call for an audit of the election this week.  That was unconscionable, and made doubly bad by this report, taken from Wikipedia:

Before the counting of the votes, to which Hawley had publicly announced he would object, he saluted the protestors and rioters with a fist pump as he walked outside the Capitol.

Nevertheless, does he bear responsibility for what happened at the Capitol two days ago? I would be reluctant to ascribe to him responsibility for those attacks, for I hold Trump (and the protestors themselves) responsible. Trump incited the violence, not Hawley or the other 12 misguided Senators. You can say, well, their actions helped fire up the protestors, but so did a lot of other Republican actions. This was a long time in the making, and the fomenting of Republican ire was done by many.

Nevertheless, Simon & Schuster, clearly objecting to Hawley’s actions and his politics, have canceled plans for his new book, which wasn’t really about politics but the tech industry. The New York Times has an article about the cancelation (click on screenshot): 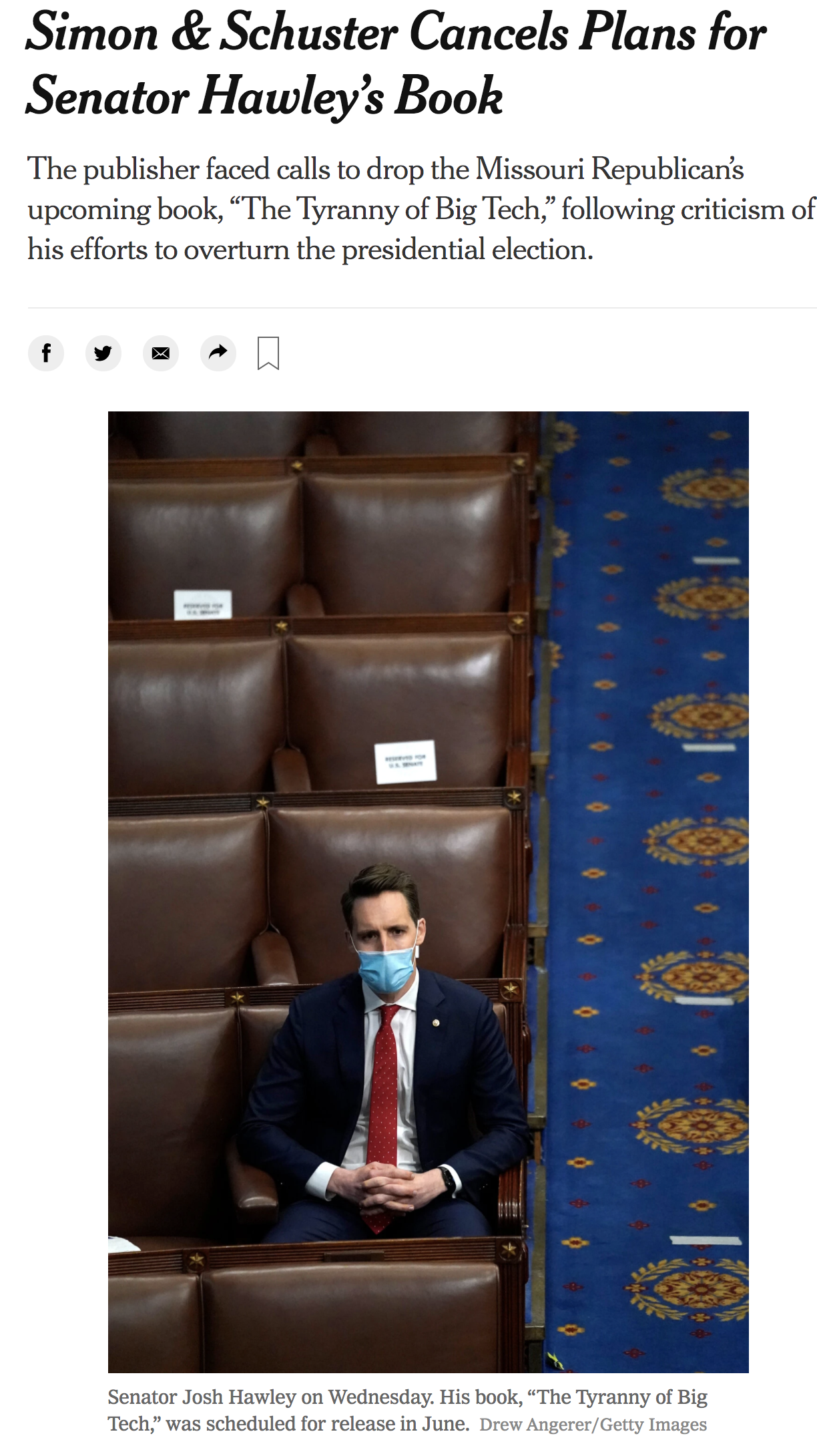 Just a few quotes and I’ll sum up:

Simon & Schuster said on Thursday that it would cancel the publication of an upcoming book by Senator Josh Hawley, one of several members of Congress who tried to overturn the results of the presidential election.

Mr. Hawley, a Missouri Republican and Trump ally, has been criticized for challenging the results and accused of helping incite the mob that stormed the Capitol on Wednesday. His book, “The Tyranny of Big Tech,” was scheduled to be published in June.

“We did not come to this decision lightly,” Simon & Schuster said in a statement. “As a publisher it will always be our mission to amplify a variety of voices and viewpoints: At the same time we take seriously our larger public responsibility as citizens, and cannot support Senator Hawley after his role in what became a dangerous threat.”

But his role, misguided as it was, was legal, and within the bounds of the Constitution. This leads to the question, which the Times poses, of the role of publishers in an America sharply divided along political lines. Books by Sarah Huckabee Sanders, Donald Trump Jr. (Hachette author), Sean Hannity (and you could argue that he helped work up Republicans), and Tucker Carlson (ditto) have been published by major houses, and ten to one somebody will snap up Trump’s ghostwritten memoirs, Triumphs of the Ill, after he leaves office. (Yes, I made up the title.)

The Times reports as well that “the escalation of the rhetoric from the president and some of his supporters in recent weeks has likely changed the calculus for editors and publishers who are wary of provoking a backlash from readers and employees.” In other words, they lack spine. But the job of all good publishers—except for religious and explicitly political ones—is not just to make money or push a favored ideology, for most of them know that most of their books won’t turn a profit. Many publishers and editors simply love books because they love speech, discussion, and ideas. Further, as I said, Hawley’s book wasn’t about politics, so he’s being punished for his political beliefs and actions:

The subject of Mr. Hawley’s book, which was already available for preorder on Amazon and other retailers, is not about the election or Mr. Trump, but about technology corporations like Google, Facebook and Amazon.

Does what Hawley think still deserve to be heard after what he did? Yes, I think so, though I won’t read his book—the subject doesn’t interest me.

Of course Simon & Schuster have a right, or so I think, to cancel the book (it depends on what was in the book contract), but I don’t think they should have. Although convicted criminals can still publish books, even about their crimes, sometimes the law forbids them to profit from their crimes. That’s what happened with this book, written by O. J. Simpson (notice the small “if” in the title), who wasn’t convicted of murder but lost a civil suit (the $600,000 Simpson was reportedly paid went to the Goldman family). 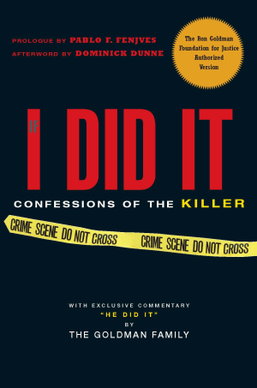 So, much as I dislike Republicans and despise those who sought to overturn an already-certified election, I don’t call for all of their books to be canceled or rejected from now on. Publishers have the right to reject them—there’s no First Amendment right to have your book published—but it’s arrant cowardness, and against the unwritten code of good publishers, to cancel a book simply because you don’t like the politics of the authors.

If this is truly to be a time of healing, as Joe Biden emphasizes so often, we can’t continue to dehumanize our political opponents. Perhaps (and this may be likely) our reaching out may be sufficiently rebuffed that we can leave them alone completely. But we shouldn’t cancel their books, accost them in restaurants, or insult them in public. I think we should be better than that.

Abigail Shrier, whose book about overly hasty gender reassignment, Irreversible Damage, was also temporarily canceled by chain stores, had this to say:

And maybe that’s the point.

Now I’m not sure about the legality of refusing these services to people whose politics you don’t like; it seems to me like illegal discrimination.  Lawyers should weigh in here. And, as I said, a publisher is under no obligation to publish a book by someone the editors don’t like. But if they deem the book worth publishing initially, which is decided when a contract is issued, then short of stuff like plagiarism or similar circumstances, the book still deserves to be published.

I’m sure others might object, but I don’t need a second; my own opinion is enough for me. (You know the rest. . .)