I was amazed to read, in the Qullette article below, this sentence:

Between 2016 and 2017, the number of females seeking gender surgery quadrupled in the United States.

But the reference cited did indeed show this (the actual increase was 3.88-fold), while the number of males seeking gender reassignment surgery was not only absolutely lower, but increased much less (41%) over a year. If you go back further, the rise is even more dramatic (graph below):

Here’s a plot from a paper in the Archives of Sexual Behavior showing the number of people referred each year to the UK’s Gender Identity Development Service. It shows the strong rise in referrals of adolescent females compared to males, and some rise in children as well. In the last 7 years it seems to have gone from fewer then 40 to over 1700 in adolescent females—a roughly 43-fold increase! Clearly, some phenomenon is happening that needs an explanation. 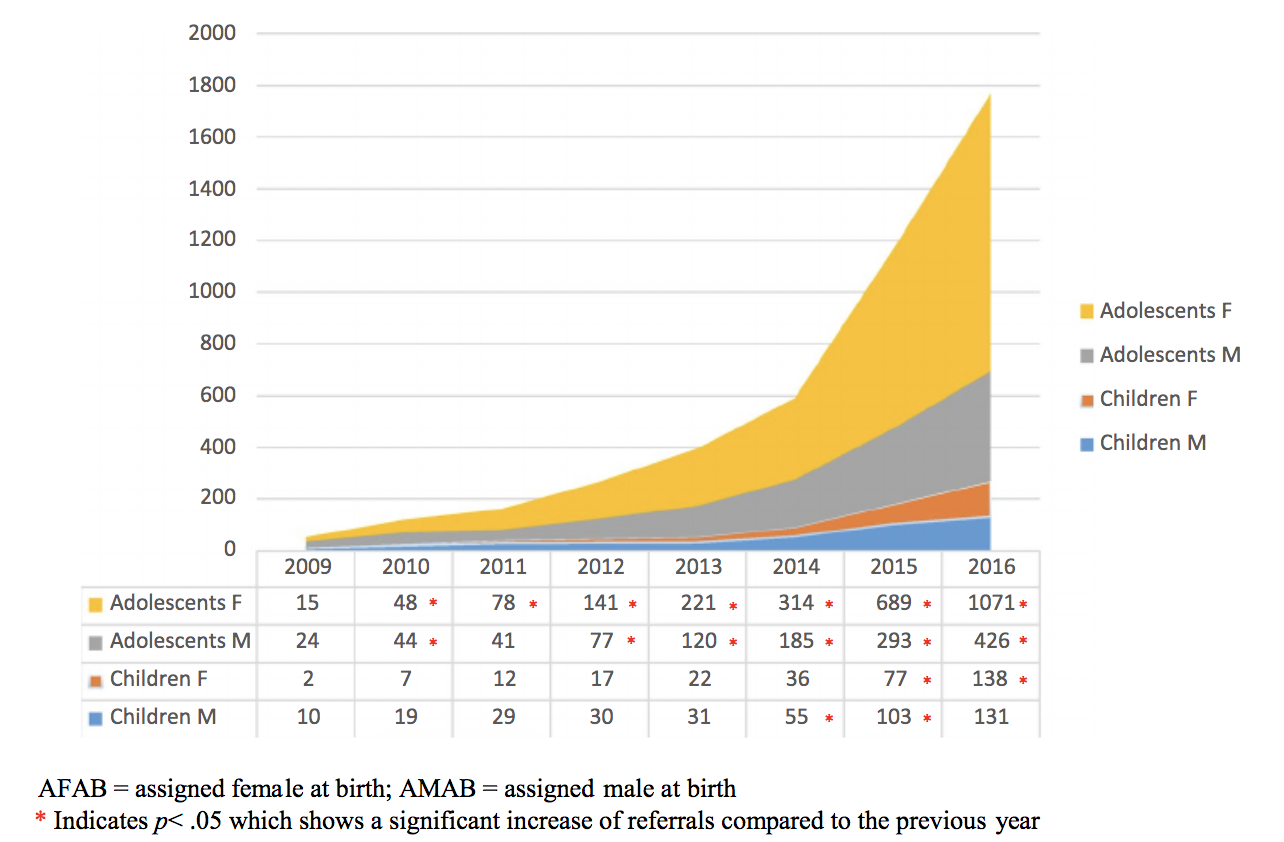 These kinds of surgeries are manifestations of gender dysphoria: the distress caused when one’s felt gender identity conflicts with one’s sex at birth. The rate of this dysphoria in adolescent and teenage women has risen to the extent that it could be considered an epidemic, which is what some people  think it is: a manifestation of cultural influence that drives many young girls to not only identify as males, but to undergo medical treatment to become hormonally and physically more like males. Shrier’s thesis is that many of these woman would have become lesbians, or reversed their desires, had not gender dysphoria constituted a sort of fad, one seen as a heroic syndrome supported by all kinds of medical and psychological professionals.

In the new book below, which has just entered the Amazon top 100 list, Abigal Shrier, a writer for the Wall Street Journal who also has degrees from Columbia and Oxford and a law degree from Yale, is raising the alarm not about adults who are transgender and undergo medical treatment—Shrier’s fine with that—but about adolescent and teenage girls who claim a different gender identity and then are universally “affirmed” by psychologists, sociologists, and doctors, many undergoing transitions before or while they’re in their teens. It’s undeniable that many of these who transitioned later have second thoughts or regrets about the process, but many of the medical procedures, including hormonal treatments, cause irreversible and injurious changes in the body.

You can get the book, which I’m doing, from Amazon, despite their refusal to take paid ads for it (more on that below).  And its popularity, and overall positive customer reviews, come despite the refusal of mainstream media to advertise or even review this book, which seems to me an important one. 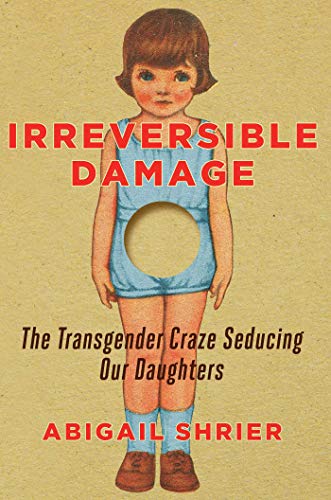 Shrier, as I said, deals only with gender dysphoria in young girls and teenage girls, and only one form: “Rapid onset gender dysphoria” (ROGD). Her thesis, as laid out in the Quillette article below (click on screenshot), is this:

What I aim to do, as a journalist, is to investigate cultural phenomena, and here was one worth investigating: Between 2016 and 2017, the number of females seeking gender surgery quadrupled in the United States. Thousands of teen girls across the Western world are not only self-diagnosing with a real dysphoric condition they likely do not have; in many cases, they are obtaining hormones and surgeries following the most cursory diagnostic processes. Schoolteachers, therapists, doctors, surgeons, and medical-accreditation organizations are all rubber-stamping these transitions, often out of fear that doing otherwise will be reported as a sign of “transphobia”—despite growing evidence that most young people who present as trans will eventually desist, and so these interventions will do more harm than good.

The notion that this sudden wave of transitioning among teens is a worrying, ideologically driven phenomenon is hardly a fringe view. Indeed, outside of Twitter, Reddit, Tumblr, and college campuses, it is a view held by a majority of Americans. There is nothing hateful in suggesting that most teenagers are not in a good position to approve irreversible alterations to their bodies, particularly if they are suffering from trauma, OCD, depression, or any of the other mental-health problems that are comorbid with expressions of dysphoria. And yet, here we are.

As I said, Shrier has no issue with adults who, after deciding they’re transgender, decide to have surgery and assume the non-birth gender. She’s solely concerned with the young: why is this suddenly happening, who is supporting it among adults, and what harms can it cause?

Because even raising these questions is considered taboo in today’s political climate, there has been a concerted effort to “erase” Shrier’s book—to pretend it never existed by refusing to advertise or review it. It came to public attention largely because Shrier was interviewed by Joe Rogan on his wildly popular podcast. Even Spotify, which hosts those podcasts, called the interview (as well as Rogan and Shrier) transphobic and threatened to walk out. (See the Rogan-show video here; I recommend it as a substitute for the book if you want to hear about the controversy). 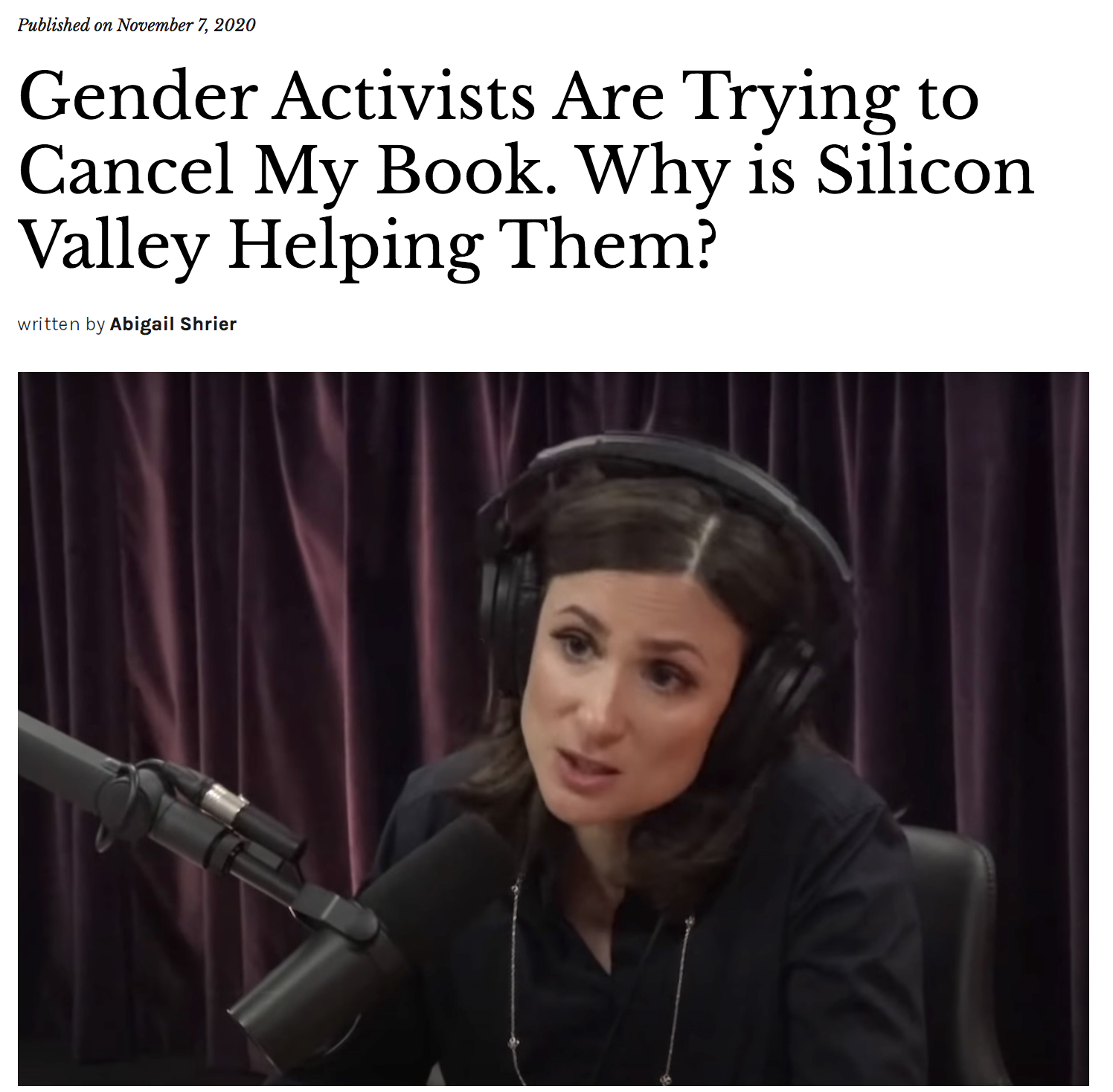 I was able to find only one long-form review of Shrier’s book—one by a feminist writing in Feminist Current, who, despite a few quibbles, praises the book highly. Click on the screenshot to read Megan Mackin’s review:

Between Mackin’s and Shrier’s pieces, you can read about all the attempts by the media (and others) to pretend Shrier’s book doesn’t exist. They include these:

And, finally, this just happened. Someone beefed to Target that they were carrying Shrier’s book, and Target removed it.

Thank you so much for bringing this to our attention. We have removed this book from our assortment.

lol they changed it but screenshots are forever pic.twitter.com/TmCC5AYnWu

To my horror, I've learned that @AbigailShrier's book has been removed from @Target. I've read it. Every grown-up who is in a position of looking after teenage girls (parents, teachers, therapists, religious leaders, coaches, etc) should read this book.

Target gave in and removed the book.

The activists explicitly said the goal was censorship.

We need to push back NOW. pic.twitter.com/0D6oWg9EME

At any rate, despite the lack of media support for Shrier’s bestselling book, she is not casting herself as a victim; in fact, her ending of the Quillette piece is measured and rational, but passionate as well:

I want to be clear about something. I don’t believe that I’ve been harmed by these suppression efforts. I am not entitled to book reviews by any media outlet. I sold plenty of books without Amazon’s “sponsored ads.” Joe Rogan (and Megyn Kelly, who also had me on) have much larger platforms than the outlets that pretended this book doesn’t exist. And while this topic has become a fascination of mine, I am no activist. I will pursue other subjects and write other books.

But there is a victim here—the public. A network of activists and their journalistic enablers have largely succeeded in suppressing a real discussion of the over-diagnosis of gender dysphoria among vulnerable girls. As you read this, there are parents everywhere being lectured to by authority figures about how they have to affirm their daughter’s sudden interest in becoming a boy—no questions asked. From Amazon to I Am Jazz, everyone is telling them that transition is the path to happiness, and those who question this narrative are bigots. So they stare at their shoes and let the conversion therapy take its toll.

This is what censorship looks like in 21st-century America. It isn’t the government sending police to your home. It’s Silicon Valley oligopolists implementing blackouts and appeasing social-justice mobs, while sending disfavored ideas down memory holes. And the forces of censorship are winning. Not only because their efforts to censor leave almost no trace. They are winning because, thus far, most Americans have been content to surrender virtually every liberty in exchange for the luxury of having products delivered to their door. Most would happily submit to the rule of Big Tech, so long as their Netflix isn’t disrupted.

At some point, it will cross each of our minds to question an item on the ever-growing list of unsayables. We will find ourselves smeared, or blocked, or the target of a woke campaign. And we will look for support from those with only a dim recollection of why they once cared about free speech. Those who will note tyranny’s advance with the pitiless smile of a low-level bureaucrat already anticipating the door-delivered Cherry Garcia and hours of uninterrupted streaming: “You brought this on yourself, didn’t you?”

Here’s the end of Mackin’s review, the only thoughtful and longish review I could find anywhere (there are, of course, short reviews on Amazon and GoodReads):

Shrier — not a radical feminist — understands the need for a transfer of feminist ideas, which may encourage other women to take a deeper look. Girls’ lives matter. I give Shrier credit for authoring this necessary book. It is the first to put the many pieces together clearly and accessibly. Read Irreversible Damage and share it with others — it is a brave and daring book that ought to be part of the public discussion.

(Mackin also discusses the many people who profit financially and professionally from affirming, both psychologically and medically, the self-diagnoses of girls as gender dysphoric.)

It’s shameful that a book like Shrier’s is publicly erased by mainstream media and stores like Target because it somehow is seen as “transphobic”.  No matter what your preconceptions are, or what you’ve read about girls transitioning before or as teenagers, this book seems like a must-read. It’s a dereliction of duty that major journalistic outlets haven’t reviewed it and that medical associations so readily affirm medical treatment of gender dysphoria in the young. This is how deeply cowed we have become by wokeness, part of which is the universal glorification of gender dysphoria, whose sufferers are seen as heroes. (That may, in fact, partly account for its rapid spread.) When those sufferers are in their teens, though, society should be moving a lot more carefully than it’s doing now.

All too often our Cancel Culture tries to eliminate discussion of issues that are vital in deciding how we should think and act as social beings. The attempts of many to pretend that this book doesn’t exist, and therefore avoid Shrier’s difficult questions, is a reprehensible example of that culture.