When I open the latest issue of our student newspaper, The Chicago Maroon, I often get similar feelings as when I read HuffPost: “This rag is way too woke.” It’s especially depressing here because of the big gap between the students’ wokeness and the University’s ideals, which are to promulgate nearly complete free speech and to refrain from the University making any official statement about politics, morality, or ideology beyond those necessary to ensure that the University functions as an equal-opportunity venue for learning and exploring ideas. (See our list of “Foundational Principles”.) Both of these principles are meant to promote free discussion, in hopes that the clash of ideas brings knowledge, awareness, and learning how to learn.

Here’s an example from the Report of the Ad Hoc Committee on Protest and Dissent:

In contrast, many (but by no means all) of our students want repression of “hate speech”, deplatforming of speakers, the right to avoid punishment for disrupting speech, and, of course, defunding and eliminating the campus police. A major editorial in the new Maroon, for instance, bemoans the possibility that after our current President—Robert Zimmer—steps down at the end of this academic year, the committee chosen to select his replacement consists of uniformly wealthy and overwhelmingly white males. (That isn’t true: there are two women, one Hispanic man, and one black man on the committee of 12, in addition to Zimmer himself). The students are afraid that Zimmer’s replacement will be just like him, and want “faculty, staff, students, and community members” to be on the search committee lest the policies of Zimmer (including retaining the campus cops) be continued.  With a committee like that, we’d wind up getting somebody like George “Can I Pee Now?” Bridges, the invertebrate president of The Evergreen State College. In fact, the committee should strive to get someone like Zimmer, as he’s fought hard to keep the University of Chicago a bastion of free speech and unrestricted inquiry (he’s also been hugely successful in the President’s other job: raising money for the University).

It’s not the disparity of age, sex, and color between students and trustees or President that worries me (our Provost, by the way, is an Asian woman)—it’s the disparity between these two groups in what they think a university is for and how it should be run. The students want the purpose of our University to be social engineering, and preparing students to be social engineers; the faculty and administration want the students to learn and learn how to think; to bathe in and ponder rarified ideas. We don’t see the university as a way to inculcate students with certain societal values, but as a way to get them to think about and arrive at their own values.

Contrast the Founding Principles above, for example, with a booklet produced by our Leftier students, the Dis-Orientation Guide for 2020: 59 pages of wokeness that begins by repudiating our principles of free speech as inconsistently applied (they’re not) and rejecting the Kalven Report’s admonition for the University to avoid taking official political stands. In my view, if our President is replaced by pliable, woke, and invertebrate Presidents like those of Evergreen State, Yale, and Smith, the unique aspects of the University of Chicago will be gone. Every class would begin with a land acknowledgment, and the faculty would have to “get in the canoe”. (Do watch that video for a horrifying dose of faculty and administrative self-abasement.)

Zimmer and some of the trustees are, of course Old White Males, a trope that appears in the same issue with an editorial with the customary critique of “core curricula” everywhere:

Placing readings in relation to current world events would not only deepen students’ understanding of content, but it would widen the context under which we could apply it later on. Untangling the pages of dense theory written in the 17th century generally does not do wonders for student engagement—it is when what we read is made relatable that it becomes interesting to us, and it is then that we become motivated to push our reading further.

The solution could be as easy as including more authors of different races and backgrounds: namely, less [sic] old white men.

I’d have some sympathy with this—after all, diverse voices emit diverse ideas and viewpoints—if the core hadn’t already been revamped to be diverse in many ways. Check out some of the courses offered, and I’ve put part of a pdf below.  You can explore more sample courses and sample texts by starting here (the “general education requirement” of 15 courses that constitutes the Core), and clicking around. Check out “Civilization Studies” for a panoply of courses that will appeal to those who want more ethnic and gender diversity. The Core is superb, and is one reason many students come here. 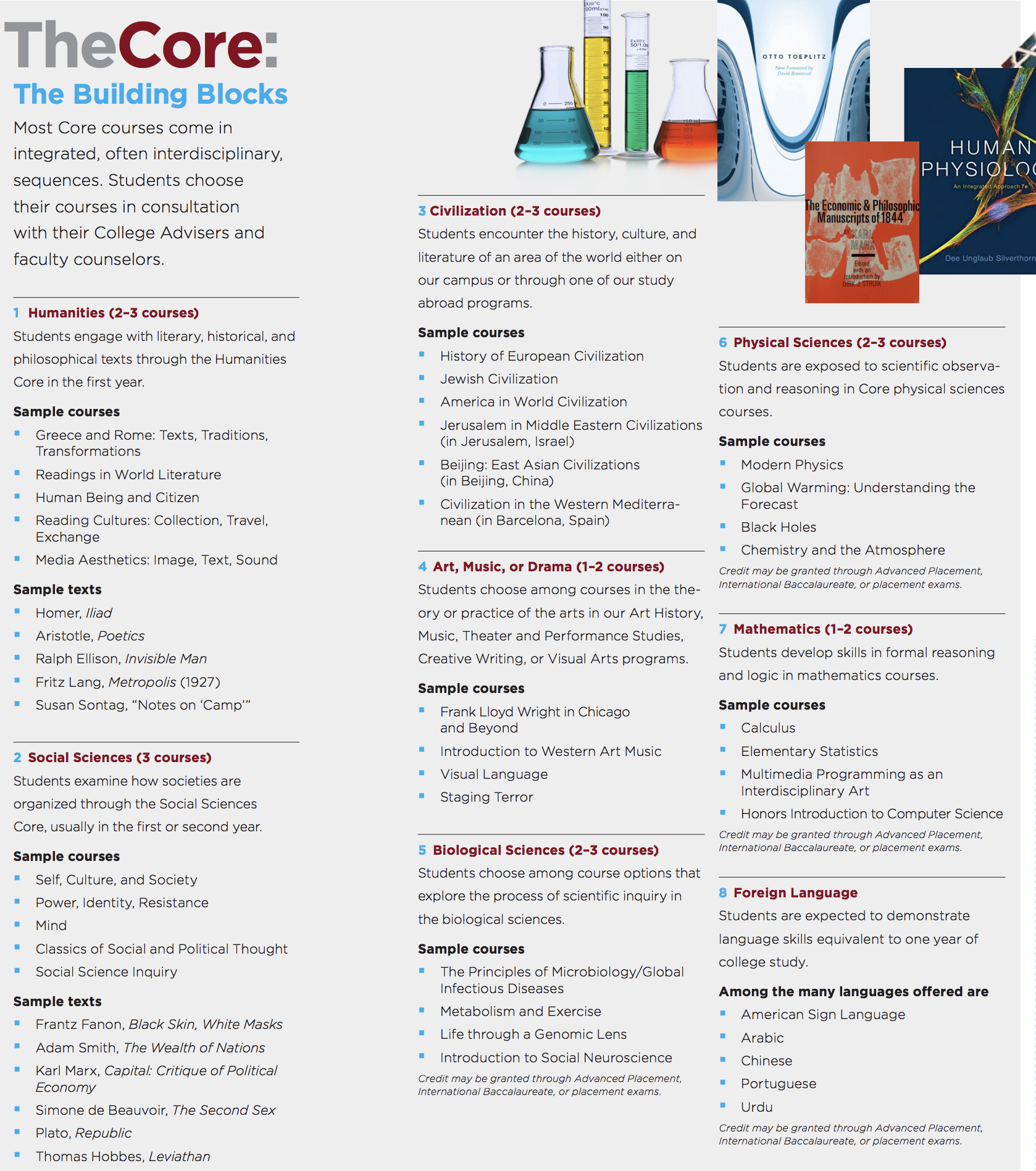 So I absolutely reject the idea that the core, which comprises considerable and diverse courses, is heavily conditioned with too many “old white males.” Of course if you’re interested in Western Civ or Western Literature, you’re going to find it OWM-heavy, for Western civilization developed at a time when women and minorities were shoved to the margin. Come back in 200 years.

But what I don’t understand is why the denigration of OLD white males? Are YOUNG white males better? Shakespeare had already produced some of his finest work by age 40, and I could name many pillars of literature and art, who, even though white, made their contributions when young.  Is the underlying idea that old white males are more conservative than young ones? Well, maybe now, but if you go back a few hundred years, even young white males would be seen through modern eyes as not only conservative, but often bigoted.

What we have here is again a conflict between two ideals of liberalism: diversity and anti-ageism. If it’s racist and sexist to denigrate authors because they’re white and male, then it’s triply pernicious by being ageist and adding that they’re bad because they’re old.

And to those who dismiss white men because they’re old, I have two words in response: Bernie Sanders.

56 thoughts on “Why are old white men so much worse than young white men?”