Here we have the second part of Jodie Shaw’s indictment of Smith College, where she works as a student support coordinator specializing in “Residence Life”. (Her first video is here, and my analysis of it here.) In this episode in a continuing series, Shaw relates how, in her latest job, she was forced to attend a mandatory three-day “professional development retreat,” the first day of which was devoted to employees discussing their “identities”.  That meant “social identities,” which at Smith meant race.

Shaw said she was uncomfortable talking about her identity and race, and was told at first that she didn’t have to. Then, at the meeting, one of the two “professional facilitiators” asked her to “tell us about your race in the context of your childhood, your adolescence, and your college years.” Shaw didn’t want to talk about her childhood or these issues with her colleagues present, for she didn’t consider them relevant to her job. So she took a pass during the discussion.

Shortly thereafter, the facilitator told everyone said that any white person who expressed discomfort or resistance about talking about their race wasn’t really experiencing discomfort, shouldn’t be comforted, and that they were really displaying “white fragility” as a “power play.”  It was made clear, however, that if you weren’t white, your discomfort would be taken as genuine.

You can listen to the rest of the short video for yourself. Shaw felt psychologically attacked and shamed in front of her colleagues, as well she should have. She filed a complaint with Smith on the basis of racial discrimination and hostility, as she was shamed and treated differently because of her race.

You may think she’s kvetching about a minor matter, but she says that her complaint extended well beyond what she says here—it was over 100 pages long. I’ll continue to put up her videos so we can see how the obsession with race is playing out in the life of an ordinary Smith employee, who’s now become extraordinary because of her courage in speaking up. It may turn out that she’s exaggerating or overreacting, but all we can do is watch to see what she says—an opportunity we’re not usually given in matters of this sort.

As I said in my last post, Shaw’s first video went up on October 27, and the College responded two days later in a public letter from President Kathleen McCartney. 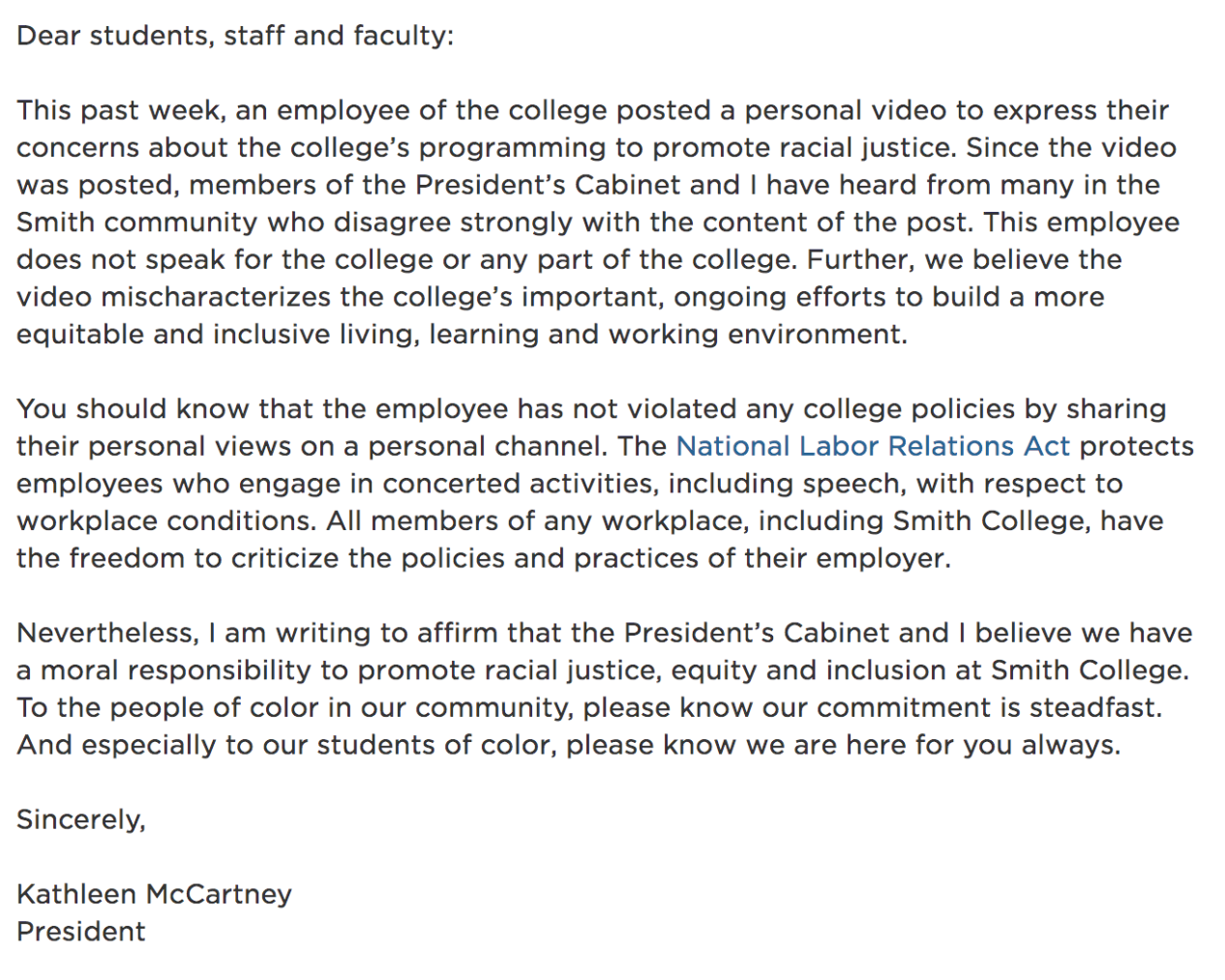 And as I added at the time, the letter basically says, ““Well, we can’t fire Shaw (but we would if we could), but we’ll ignore her (she’s an outlier, after all), and reassure those students of color who feel harmed by this video that they have our wholehearted support.”

It used to be that religion poisoned everything. Now it appears that race is acting the same way. But let us see as Shaw posts more videos.