Here’s a 10½-minute video produced by an extraordinarily courageous woman bucking the wokeness of her employer, Smith College in Northampton, Massachusetts.  This is the first of several videos promised by staff member Jodi Shaw, an alum who works as a student support coordinator. Her picture has disappeared from the staff page—only the first step in the inevitable demonization that will happen to her. She is toast: after just this video—the first one—she will be shunned, harassed, and, ultimately, will have to resign because she’ll have nothing to do (they can’t fire her).  She’ll never be able to get a job at another college.

Shaw doesn’t try to hide her name or her background, and she’s suffering from a common malaise: race exhaustion. Smith is one of the wokest American colleges, something that seems to correlate positively with the prestige and priciness of a college. (Smith is very prestigious and very expensive.)  Shaw, a “lifelong liberal”, has had enough of the obsessiveness of her college—or at least about her job—with matters of race.

The upshot: Shaw made this video because she feels put upon and unvalued, apparently because the only “value” Smith sees in her is a negative one—her whiteness. She would like to be valued not by her ethnicity but by the quality of her work, her deeds, or her character, but it isn’t happening.

She’s apparently speaking for other Smith staff members who don’t have her courage to speak out. A short excerpt:

“I ask that Smith College stop reducing my personhood to a racial category. Stop telling me what I should think and feel about myself. . . Stop presuming to know who I am or what my culture is based upon my skin color because you don’t know that. You don’t know that about anybody, except for yourself. Stop asking me to project stereotypes and assumptions upon other based on their skin color. . . Stop telling me that young women or color have no power or agency in this world, because that’s not true. Stop telling me that young white women have power and privilege over everyone else, because that’s equally not true.  . .  Stop demanding that I admit that I admit to white privilege and work on my so-called implicit bias as a condition of my continued employment.”

I’d imagine that required training in implicit bias—and I’m guessing that Smith does require that for staff—would drive anyone to exasperation. 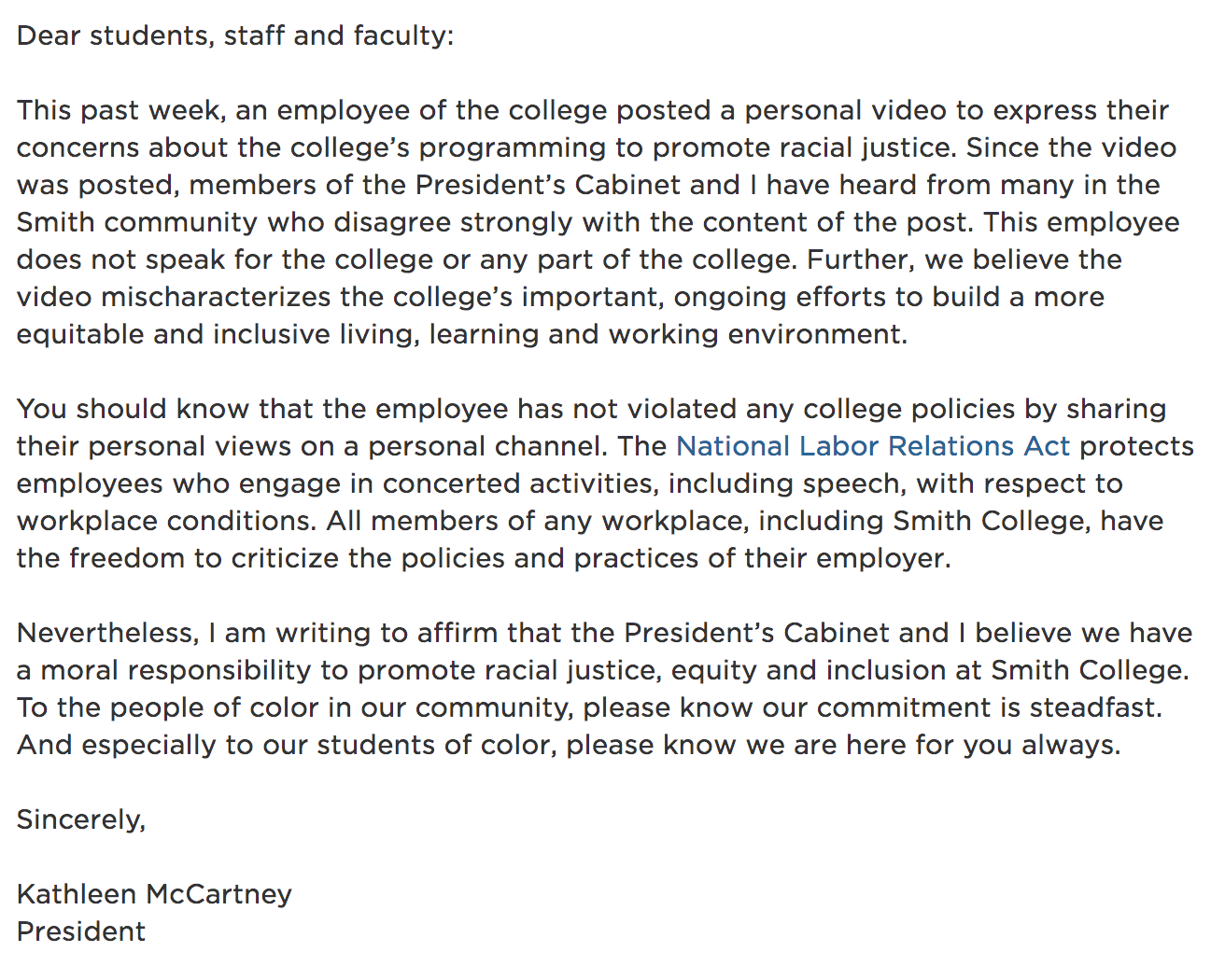 I have to say that this is an extraordinarily insensitive letter given Shaw’s sincere, even timid, video. What McCartney’s letter says to me is basically, “Well, we can’t fire Shaw (but we would if we could), but we’ll ignore her (she’s an outlier, after all), and reassure those students of color who feel harmed by this video that they have our wholehearted support.” The letter buttresses Shaw’s claim that, at Smith, whiteness is an undesirable trait compared to skin of color.

Now imagine if a black staff member produced the same video—and they could easily have done so, just substituting the word “black” for “white”. In all other respects, such a staff member could also complain that they were undervalued because of their skin color, that their achievements weren’t appreciated, and so on. If that happened, you can bet that Smith College would reach out and support that employee big time. There is no support at all for Jodie Shaw. Even though she’s speaking for several people too afraid to join her, she has a legitimate grievance, but Smith will ignore her.  It’s clear they’d be delighted if she left.  In other words, the College’s reaction simply supports Shaw’s indictment.

I’m not sure what prompted Shaw to make this video, and I’ll be curious to see what she says in the subsequent ones. I do admire her for speaking up, but her downfall seems to me inevitable. I can’t imagine she’s a bigot, or riddled with implicit bias, but Smith College, apparently through its monomaniacal obsession with race and with the denigration of “whiteness”, has made her look that way to others, and has eroded her own self image. One would think that colleges would care about that, but you’d be wrong.

Thanks to the several people who sent me this video.

81 thoughts on “A disaffected staff member at Smith College complains about its obsession with race, makes a video that will doom her”