A really insane paper was just published in an Elsevier journal, Science of the Total Environment, a paper that connects the outbreak of covid with serpentinization phenomena known in geology, as well as the Earth’s geomagnetic fields. At the end, the authors (who hold respectable jobs) suggest that putting nephrite jade amulets on rats may protect them from getting coronavirus.  And maybe it would work for us, too!  It’s gonzo. Of course, we can’t blatantly dismiss it out of hand without at least reading the paper (which I did, and it was PAINFUL), but this nonsense comes about as close to being dismissible as a paper can from just reading the title and the abstract. Click on the screenshot to read the paper, get the pdf here, and see the reference at the bottom. 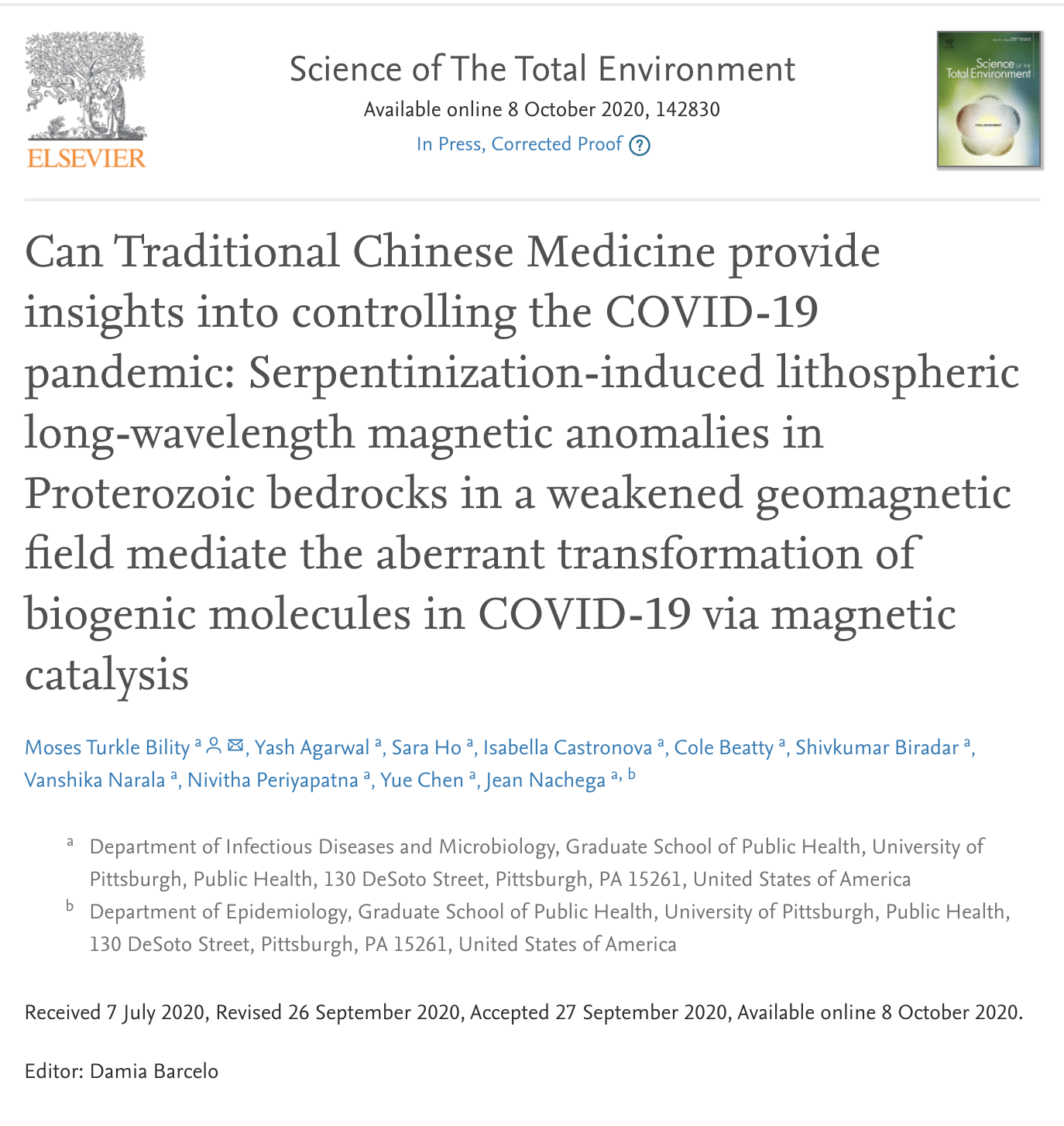 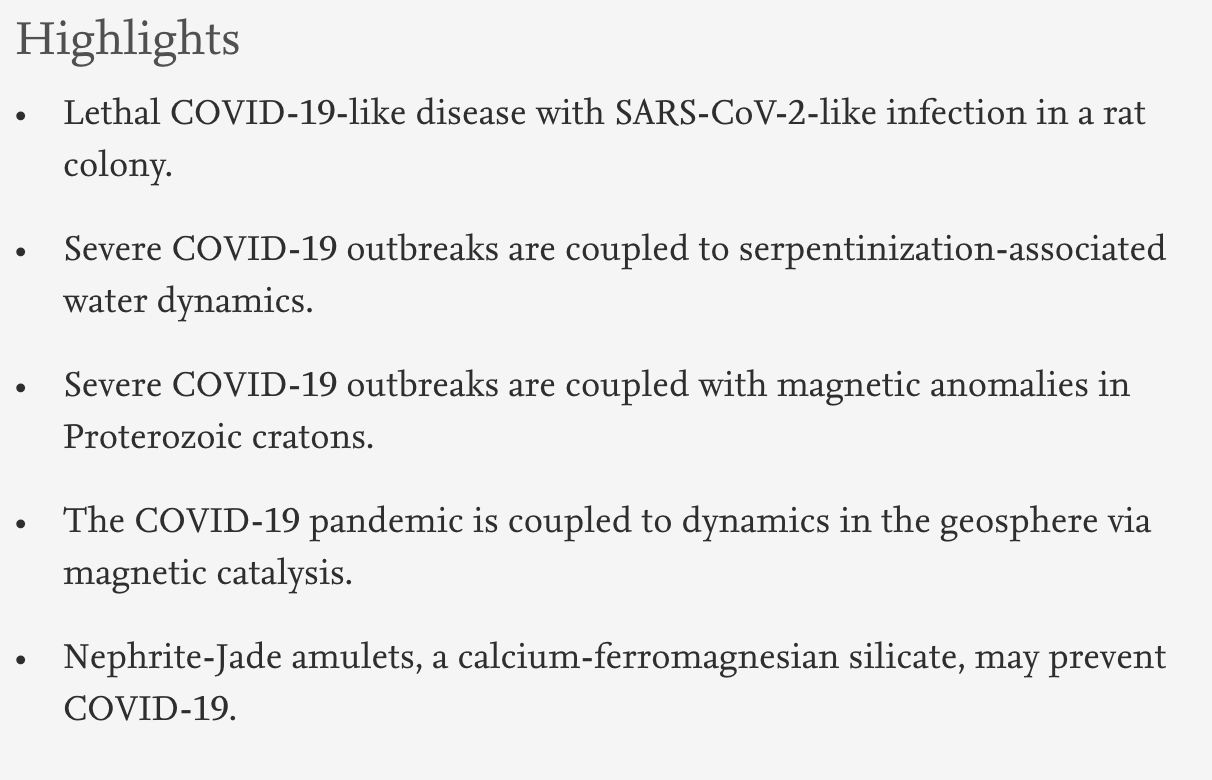 I’m not going to go through the results in detail, which are both experimental and correlational, but even the “experimental” results are correlational: the authors observed, in rats afflicted with a “COVID-19 like disease” (they don’t know its relationship to genuine virus), that dissected rats had deposits of “silicate/glasslike structures in the lungs and kidneys”, which they associate with serpintinization. There was no experimental manipulation; they just saw some of the rats in their colonies get sick (17 out of 92), and cut them open.

The rest of the paper is speculation based on correlations of the disease in humans with geological phenomena, leading them to their Big Hypothesis:

Here, we propose that the emergence of COVID-19 outbreaks resulted from the generation of LWMAs [long-wave magnetic anomalies] that exhibit resonance with ferromagnetic-like iron stores in humans, thus enabling the magnetic catalysis of iron oxides-silicate-like minerals and the associated SARS-CoV-2.

And so iron is important, and so is water and geology, so they support their hypothesis with statements like this:

Terrestrial water storage dynamics also account for the disproportionate deaths in populations with African ancestry in the United States during the vernal phase of the COVID-19 pandemic. Individuals with African ancestry disproportionally reside in basins within the coastal belt of the Greater Appalachian-Ouachita orogenic belt that spans the South to the Northeastern United States (the so-called Black belt). This so-called Black belt region has been experiencing increased terrestrial water storage over the past decades and experienced increased terrestrial water storage during the vernal phase of the COVID-19 pandemic.

Of course that doesn’t explain why, in a single area, blacks are more liable to get infected than are whites.

In the proposed hypothesis, ferromagnetic-like/superparamagnetic iron stores (i.e., ferrihydrite) in humans  is critical for resonant LWMA-mediated magnetic catalysis in COVID-19 pathologies. Iron stores are low in children and increases with age, with the highest levels in the elderly. Males have significantly higher iron stores compared to females. Consequently, COVID-19-induced morbidity and mortality risk are directly proportional to age, and male sex is also a significant risk factor for COVID-19-induced morbidity and mortality.

Yes, it smacks of quackery, but I’ll let someone like Orac go after the paper as a whole, for life is short.  Oh, there’s one more test they propose:

. . . It is posited that Jade (including Nephrite) amulets protect the wearer against unseen nefarious forces that cause disease in thoracic organs. Indeed, the romantic language word, piedra de ijada (from which the English word Jade is derived) translates to the stone that prevents disease in organs in the side/flank of the body (thoracic organs). Additionally, the English word Nephrite is derived from the Greek word lapis nephriticus, which translates to the stone that cures kidney disease.

Future experiments and analysis in support of this hypothesis will determine 1) the genomic sequence of the polynucleotide molecules producing the SARS-CoV-2-like antigens in the laboratory rats using next-generation sequencing technology, 2) the ability of Nephrite-Jade amulets to prevent lethal COVID-19-like disease and associated SARS-CoV-2-like infection in laboratory rats in our colony during the equinoctial period. . .

Check out the paper’s bizarre “graphical abstract”, which is reproduced below.

Maybe Gwyneth Paltrow’s jade vagina eggs had something to them after all! Well, I will let the experimenters fit the rats with tiny jade amulets and see if they work. I’m betting not. However, in support of their hypothesis, I sometimes wear pounamu (nephrite shapes on necklaces) that I got in New Zealand (they’re a traditional Maori decoration), and I haven’t gotten Covid yet. Maybe we could do the experiment now with the many people in New Zealand, both white and Maori, who wear pounamu. Those who wear amulets should get covid far less often.

Of course Retraction Watch had to feature this paper, and so it did in the article below (click on the screenshot). 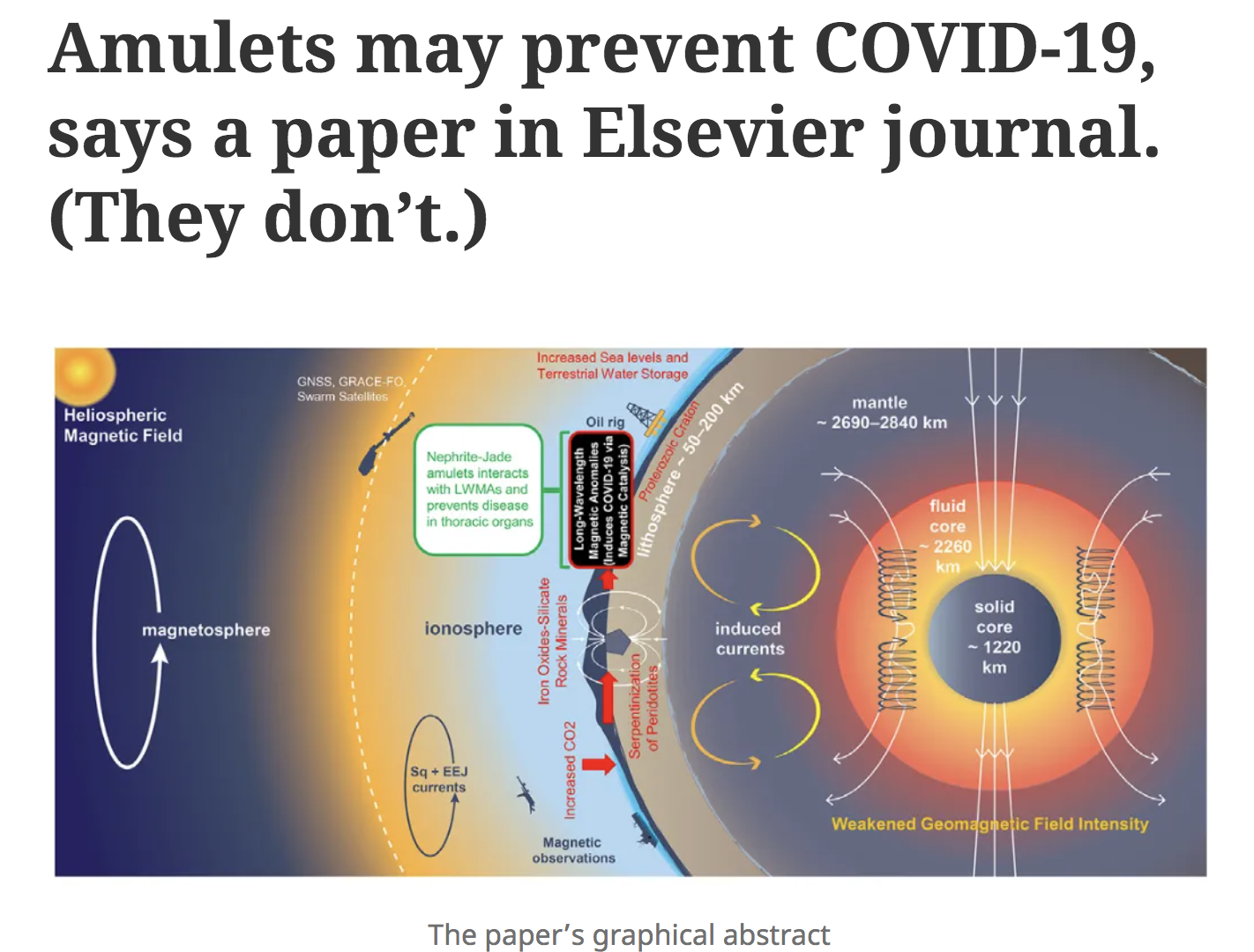 The site reproduces some baffled tweets by other scientists, and then inquired of the paper’s first author, Moses Turkle Bility:

We asked Moses Turkle Bility, a Pitt professor who is listed as corresponding author of the paper, whether he in fact wrote it. He confirmed that he did:

…I kindly suggest you read the article and examine the evidence provided. I also suggest you read the history of science and how zealots have consistently attempted to block and ridicule novel ideas that challenge the predominant paradigm from individuals that are deem [sic] not intelligent enough. I [sic] not surprised that this article has elicited angry responses. Clearly the idea that a black scientist can provide a paradigm shifting idea offends a lot of individuals. I’ll be very candid with you; my skin color has no bearing on my intelligence.

If you have legitimate concerns about the article and wish to discuss, I’ll address; however, I will not tolerate racism or intellectual intolerance targeted at me.

Every quack fancies themselves a Galileo, though most quacks are simply quacks. And there was no racism.

We asked Bility for evidence that “Nephrite-Jade amulets, a calcium-ferromagnesian silicate, may prevent COVID-19,” and whether promoting non-evidence-based interventions during a pandemic was a good idea. His non-answer:

Dear Dr. Oransky, please read and understand the article in its entirety, before you make a hasty decision. If I may speculate, you neither understand quantum physics nor spin chemistry; you are making a hasting [sic] decision based on your knowledge of the classical theories that dominate the biological sciences. Also, certainly you being a white male offers you the privilege to think that you have the right to determine who can propose ideas that challenges a dominant paradigm. Other cultures are not primitive, and people of color and indigenous people are not intellectually inferior. Before you jump to conclusions about this article, I suggest you understand quantum physics, and spin chemistry, and how it differs from classical theories, and then read my article.

The author, who is black, is clearly defensive, and is blaming criticism on his race. But the insanity of this paper has nothing to do with race; it has to do with whether good science is being done, and it doesn’t look like it to me.

Finally, Retraction Watch went to Elsevier, whom I don’t like anyway because they’re price-gougers. And they defended the paper!

The paper went through our standard reviewing process. It was  reviewed by two expert reviewers and only after  several revisions with the agreement of the reviewers it was accepted.

Well, lots of dumb papers get published, though relatively more of them in the humanities than in the sciences. This paper won’t do much harm to science or medicine, but it may damage the careers of its authors unless, by a million-to-one chance, they’re right. And certainly Elsevier doesn’t come out looking good on this one. 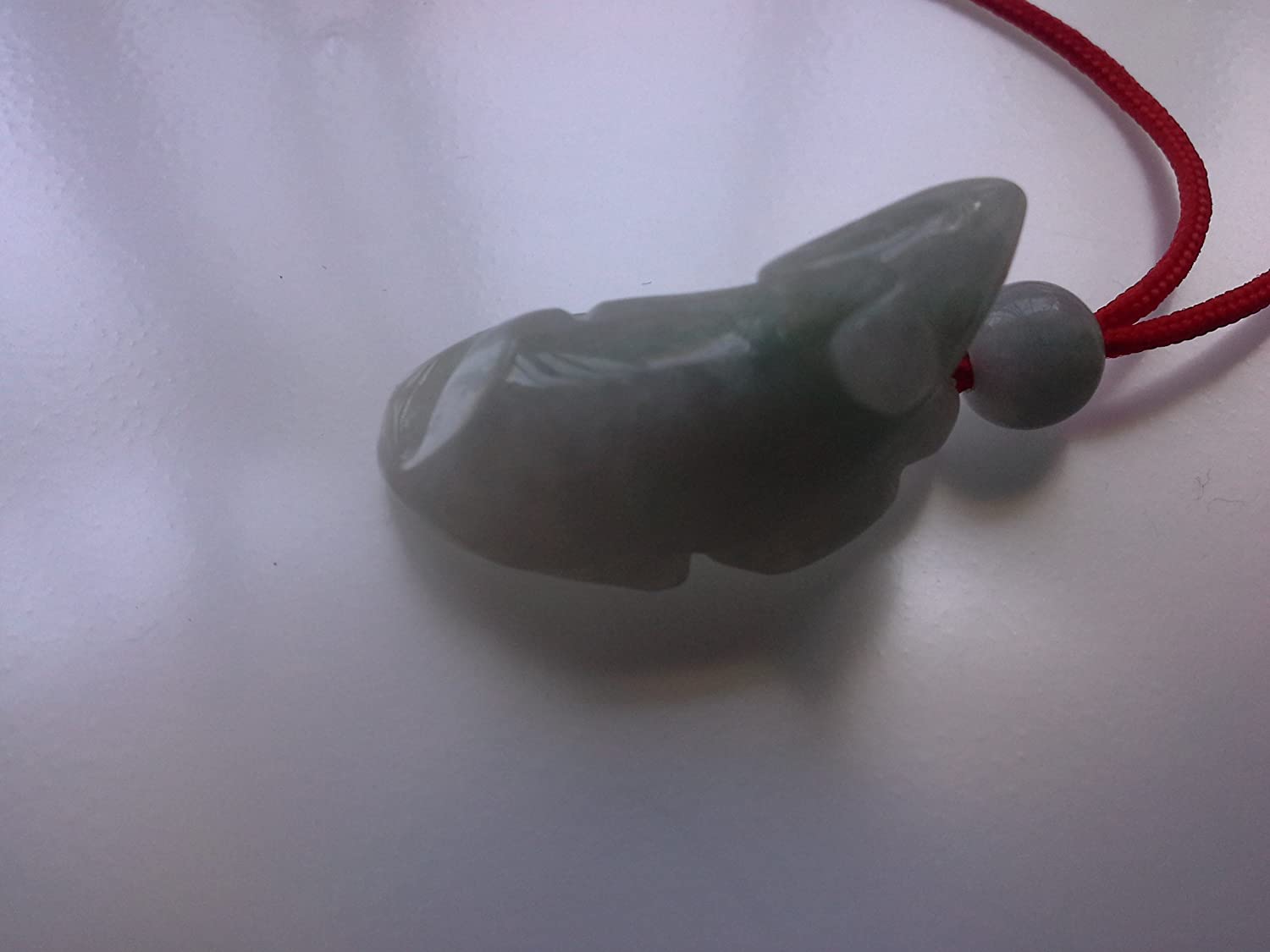 67 thoughts on “A bizarre paper in an Elsevier journal suggests that Covid 19 is a geological/magnetic-like phenomenon and can be prevented by wearing jade amulets. Elsevier defends the paper.”