I’ve put up two posts (part 1 and part 2 ) about Jodi Shaw, an employee of Smith College who works as a student support coordinator specializing in “Residence Life”. Shaw had a beef with the College for forcing her to undergo mandatory training in what seems like critical race theory, and in which she was humiliated by the facilitator for her “white fragility”. Kathleen McCartney, the President of Smith, then responded to Shaw’s first video with a cold-hearted letter to the entire College saying, in effect, something like, “Well, we can’t fire Shaw because of the law, but we’ll ensure that all students of color are protected from harm.”

When I commented that I highly doubt that there is “systemic racism” at Smith, one reader did some Googling and managed to find one incident in which a black Smith student, Oumou Kanote, complained about being racially profiled for eating lunch in the cafeteria and resting on a couch. Our reader even cited Kanoute’s own account, given at at the ACLU, as evidence that “students of color at Smith can and have been made to feel unwelcome.”

Sadly, that claim is not true, and does not constitute any evidence for racism at Smith.

I did some digging and found out that Kanote’s report of racial profiling did not stand up, even with Smith College’s own internal investigation and their production of a 100-page report. The person who called the cops didn’t even give her race, and the whole episode should have been written off as a misunderstanding—largely by Kanoute. You can click on the two articles below from the Boston Globe and Inside Higher Ed to see why this wasn’t a case of racism.

Nevertheless, as Shaw argues in the 45-minute Quillette podcast below, Kanoute won’t give up claiming that she was the victim of racial bias—even after Smith said, no, that didn’t happen—nor does Smith or its president want to let go of that incident either, still trying to pretend that there’s some invisible systemic racism floating around.

It’s almost as if Smith wants there to be systemic racism at the College, so they can flaunt their virtue by opposing it. I haven’t been able to find any other incidents besides Kanoute’s discredited claims, except for some swastikas painted on Smith buildings two years ago. That incident, however, didn’t receive near the attention that Kanoute’s claims did, was largely dismissed by Smith’s President, and, of course, Smith students aren’t told that their college has “systemic anti-Semitism”—nor do they receive anti-anti-Semitism training. After all, swastikas aren’t nearly as much of a threat as a bogus claim of racism.

In her podcast below, Shaw says that Smith’s failure to correct the record about Kanoute’s claims, even after an extensive investigation found them baseless, is “one of the biggest moral failings I’ve ever been privy to in my life.”

I’m putting up this series from time to time because it’s so rare that someone like Shaw not only reveals the kind of draconian brainwashing students are subject to, but pushes back against it. She is, of course, toast: she’ll be demonized at Smith and her life made miserable, all because she doesn’t want to be denigrated for being white. I pity her but also admire her bravery.

Up to 31 minutes into this podcast, you’ll hear about the Kanoute case and Smith’s failure to address its own investigation, and then, after that Shaw repeats her story about “professional development training,” which you might have heard before. 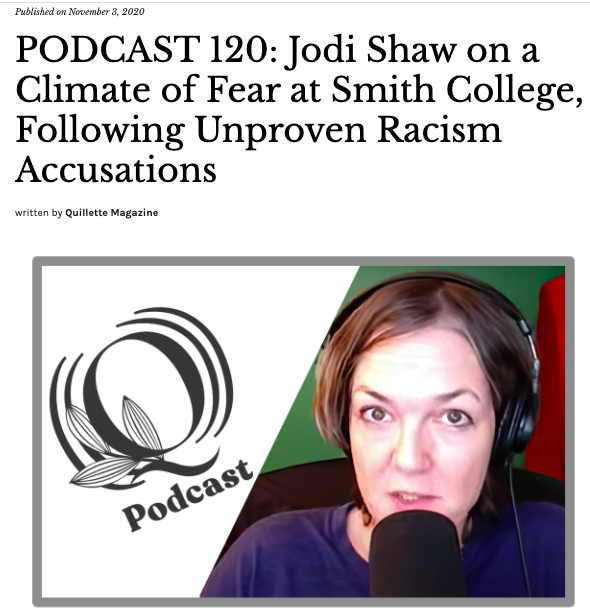 In the video below, which I haven’t posted, Shaw addresses and responds to President McCartney’s open letter about her first video. It’s a calm and reasonable response to the letter, but doesn’t beat around the bush, either.  The sad part is this: Shaw is under the impression that her video will inspire some kind of “dialogue” with President McCartney or the Smith administration about “equity and inclusion”—not just for students, but for staff, and for everyone, including dissenters like Shaw who are exercising freedom of speech. If Shaw really believes that she’s going to initiate a dialogue, she’s deluded: what Smith wants is for her to shut up and find another job—if she can. Smith is not going to rethink its policies no matter how many videos Shaw makes (here’s another new one about other incidents that, says Shaw, shows discrimination against her).

If Shaw is right—and she says that other people agree with her, but are afraid to speak up (a reasonable assertion)—Smith is going bonkers about race and yet there is no racism in evidence there.

I’ll continue to listen to her videos and report on any worth mentioning. The alternative hypothesis is that Shaw is aggrieved but unhinged, but so far I haven’t seen much evidence for that. My only issue is that her videos are twice as long as they need to be. I can excuse that, though.

17 thoughts on “Jodi Shaw, the Smith College employee shamed for whiteness, is interviewed at Quillette and issues a new video about discrimination”