Remember that crazy paper by Bility et al. that I highlighted on October 30? He and his coauthors proposed that the symptoms of COVID weren’t really caused by the virus, but by some kind of interaction between the Earth’s magnetic field and iron oxides in the body? Their “evidence” was simply that a colony of rats that got sick in their lab showed some changes in their lungs that looked like “silicate/glasslike structures in the lungs and kidneys”. (The connection of the virus itself to these anomalies is unclear.)

The last straw, besides the lack of any experimental evidence beyond observation of changes in sick rats that were, to the authors, suggestive, was the proposal that further study might involve putting jade amulets on rats and seeing if they had preventive effects.

The scientific community reacted with predictable skepticism, and, indeed, outrage. Not all hypotheses are worthy of being entertained, and this was one of them. Elsevier, the publisher of the journal, at first dug in its heels, refusing to retract the paper from Science of the Total Environment. But now, according to New Scientist, the pushback has gotten so strong, and the scientific objections so numerous, that they’ve finally retracted the paper. Click on the first screenshot below, which also has a link to the second one, where the paper has disappeared to be replaced by a retraction notice:

Here are a few of the scientific objections:

“A paper like this gets out there, it’s published in some supposedly peer-reviewed journal—it makes the rest of the field look stupid,” says Joe Kirschvink, a Caltech geobiologist whose research areas include sensing of magnetic fields by humans and other animals. “And that’s a harmful thing.”

Kirschvink says the paper contains multiple basic errors. For example, while very strong magnetic fields can indeed influence chemical reactions, the long-wavelength anomalies that are central to the study’s thesis are “three or four orders of magnitude off” from what would be required for such effects, he says. “This results section is a salad of different ideas taken out of context.”

The study also suggests, without experimental evidence, that jade amulets might protect wearers by countering the effects of the long-wavelength anomalies, an idea Bility says he based on records of practices by ancient people in China and elsewhere during a period when geomagnetic conditions were similar to what they are now. Kirschvink says the study’s description of jade’s magnetic properties is incorrect, and that in jade, “the paramagnetic minerals are so weakly magnetized, they’re not going to do anything in these fields.”

Kirschvink says he’s heard from fellow geomagnetics researchers who “are upset that their data is being used in a nonsensical way” in the paper.

The study has also attracted derision on Twitter and PubPeer. Johns Hopkins University School of Medicine extracellular vesicle researcher Kenneth Witwer was among those who criticized the paper on PubPeer, writing in part, “Almost all symptoms were restricted to Room Number 1 of two adjacent rooms in Pittsburgh, suggesting that some agent such as an undetected pathogen was responsible for symptoms. Effects of the earth’s magnetic field would presumably be similar in side-by-side rooms at the same facility.” 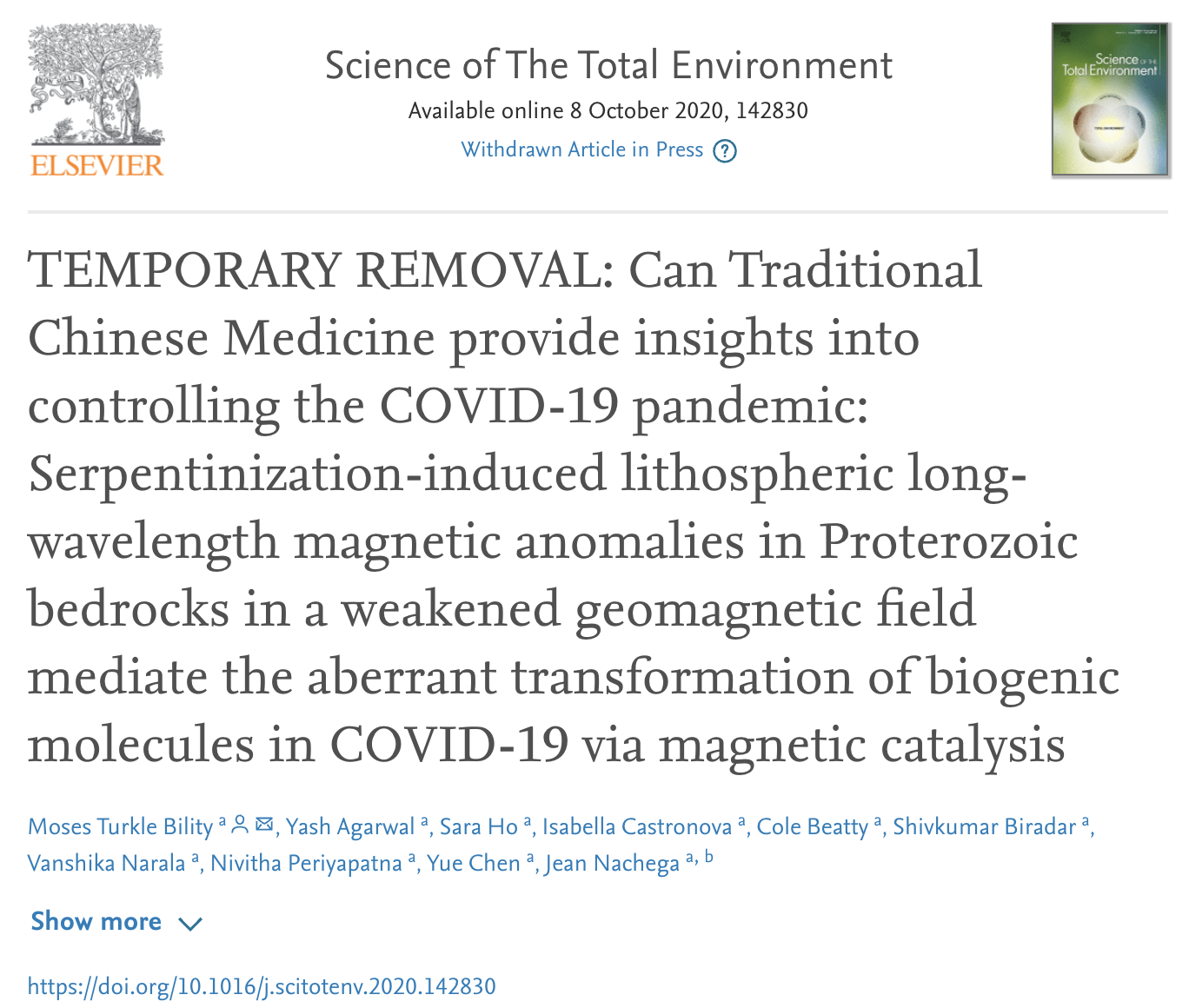 But this isn’t over yet. Bility, who can’t seem to let go of this hypothesis, plans to resubmit a revised paper:

Bility says that in light of the blowback his work has received, he regrets including his coauthors on the paper, and he takes full responsibility for its ideas. His intention, he says, was not to undermine public health officials, but to propose a hypothesis for further discussion and investigation, and he plans to resubmit the paper as a sole author and without mentions of jade amulets or traditional Chinese medicine.

Both Witwer and Kirschvink say the paper’s publication represents a failure of peer review. According to Damià Barceló, the editor at Science of the Total Environment who handled the submission, it had two reviewers, a hydrogeologist and an epidemiologist-toxicologist. In an email to The Scientist yesterday, he wrote that he expects the retraction will take hours or days to appear in Elsevier’s system, and that the resubmitted paper will need to be sent for peer review again before a final decision is made about its acceptance.

Anybody betting that a. there will be a revised paper? Or b. that if there is one, it’ll be accepted? My bet is that Bility will never live this down: he’ll always be the “jade amulets on rats” guy, and shame on the reviewers and editor for publishing this travesty in the first place. It had absolutely no earmarks of serious science.

Finally, although initially people said this paper was just a quirk in the career of a serious scientist, a glance at Bility’s Academia.edu list of publications and manuscripts shows some other dubious work, including this one:

There are also some physics-like papers, including one proposing a “theory of everything.”